Final version released and it's free! AntiDark Matter V1.2 is now released and there are many changes, like difficulty settings, checkpoints and even complete level overhauls. Also, here are few tips and a small FAQ.

Posted by TheClavePointZero on Sep 10th, 2014

Final version released and it's free!

It's been over a month since the final version (1.2) of AntiDark Matter was released silently. Because of time issues, this wasn't announced until now. There are plenty of changes which improve the original game mechanics and game play. Also, because it is the final release, it is very unlikely that there will be any more updates. I want to take the time to build a new project, something more different than AntiDark Matter and rather ordinary. 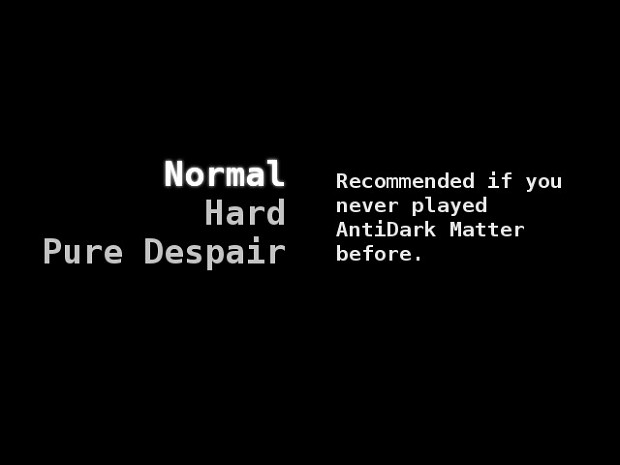 You are now able to choose a difficulty level: "Normal", "Hard" and "Pure Despair"

The"Normal" difficulty could be considered as easy and was made especially for players who want to take a peek inside the game without much frustration. Many people thought that some game mechanics were bugs. After some research I understood that the "stopping knife" after a failed cut on the door was actually meant. The "normal" difficulty level now gets rid of it. There still is such a punishment after a failed cut, but it's reduced to a minimum level.

The changed creature speed could make even more people happy. With the "normal" setting, it will take less steps in a second and the possibility that it will pause a moment is much higher. But there are even more changes in it's original behavior, that I won't discuss any further now. Feel free to discover them by yourself.

Don't worry if the creature still might be fast. Because on "normal" the player will have almost unlimited stamina to run. Besides that, the maximum stress level is reduced, the player's strength increased and a sudden appearance of the creature won't excessively raise the stress level. This means that the doors won't be a big problem anymore.
Again, the "normal" difficulty changes many things that were considered as too frustrating and was meant for anyone who want to try AntiDark Matter.

The "hard" difficulty is mostly the original game, except for minor changes and tweaks. And the "Pure Despair" level is what it says. By myself, I could do this difficulty once but with over 100 deaths. Maybe there is someone out there, who would enjoy this kind of game play. 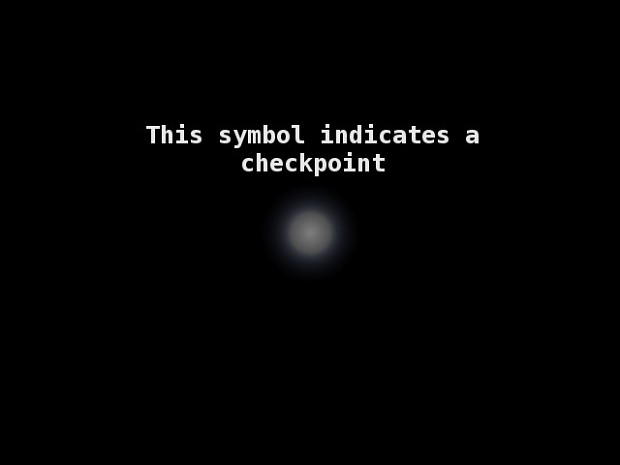 It is still very important to save the game, just like in the original release. Although, you can't load your game after you shut it off. There were no save points erased, but instead more checkpoints implemented. These checkpoints save the relevant classical game data. After death, the last checkpoint will be loaded automatically and all stats (stress level and stamina) will be refreshed. This means, if you pass a checkpoint, the player's stats remain the same but will be set to standard after respawn. 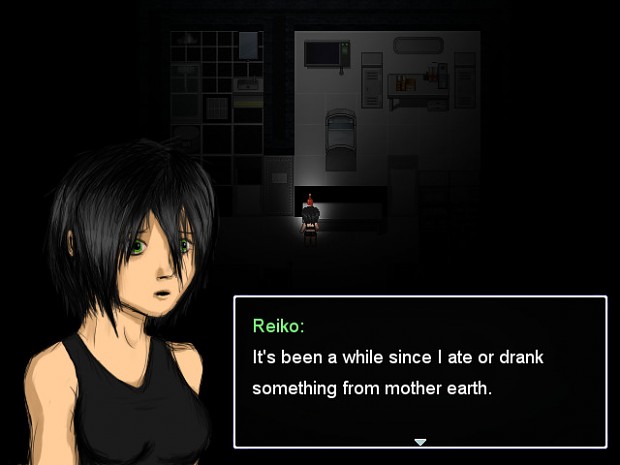 In the beginning, when Reiko still has no flashlight, it's a bit difficult to find it. Now the player can coordinate through her dark apartment by interacting with the furniture and other objects. Additionally, it's possible to find out more about the life in space. Don't forget to check out the fridge before leaving the apartment, a small snack will increase one of total four stats. 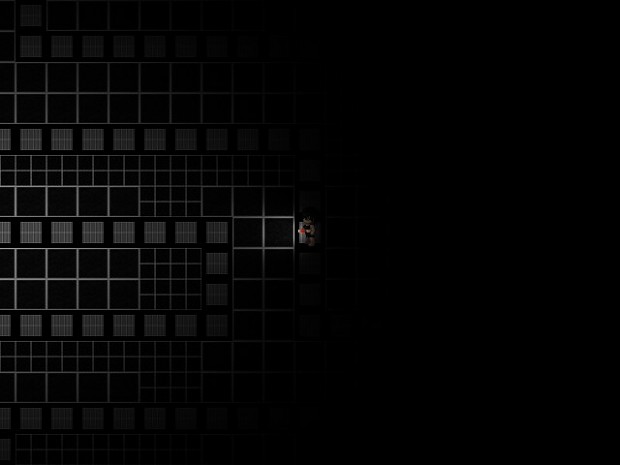 The two final levels were changed to it's original idea

If someone, who played the older versions, did it into the particle accelerator, then it might have been a small disappointed for him. To get the game done in time (2 weeks), many concepts and designs were taken out. Now, all parts within the game were altered more to it's original idea.

The particle accelerator was meant to be some kind of a labyrinth, but ended up as a large hall instead, where the player should find the entrance to the machine room. The idea behind it was to set the player inside a large, flat place where the creature could appear. Because of the darkness and the dark ground, it's very hard to see it. Instead, the player must listen to the sounds it makes and always look around. In the original release, this was realized by putting arrows on the hall's corners and edges and to all misfortune, this was released barely tested. So it turned out to be more confusing than fun. In the final version, this part was improved to it's best form. There is a complex path, a line which leads the way to the machine room entrance.

The machine room itself had many "traps". There were many rooms that turned out to be a dead end and in case the creature appeared in the entrance, it would have been impossible to escape. This time, there are only very few dead ends, so the machine room is rather beatable.

Of course there are more changes, but these were the biggest ones. Feel free to download the game and to discover the dark atmosphere within the ISSC! Thank you for reading!

Q.: As developers, there is only "Johann Koklemin" mentioned. There were others?

A.: Yes and no. Most of the environment graphic was made with a tile set by Mataraelfay, which helped me a lot to get everything done in time. His deviantart page can be seen here: Mataraelfay.deviantart.com
Everything else, which is not standard stuff (few sounds and a switch sprite) was made by me, Johann Koklemin.

Q.: The end seemed to me a bit out of the blue. Was this planned?
A.: No, unfortunately this had to be done, otherwise I would have never been able to submit the game to the indie game contest 2014.

Q.: So this game was made for a contest?
A.: Yes and no. The contest was the trigger to make a game from scratch. I was working with the old RPG Maker 2003 for many, many years and always started new projects. This time I saw it as a opportunity to finally produce a complete game.

Q.: Since the sudden end wasn't planned, will be there a sequel?
A.: Well, the original concept of AntiDark Matter contains much more than the realized game. But I don't want to promise anything here.

Q.: So you did the sounds also by yourself?
A.: Yes. For the creature sounds I used two sources, which includes a screaming woman and a growling leopard.

Q.: Was it really made in about two weeks?
A.: The original version (V1.0) was made within two weeks from scratch. I had to make everything, except the most part of the tile set (I had to add some more things to it), by my own. I even learned a programming language (Ruby/RGSS1) within this time span to get everything done (fortunately I am studying software engineering and had experience with programming).

Feel free to leave a comment on wether you liked the game or not. Also, if you experience issues, please contact me here on IndieDB or on the e-mail adress which is in the game's "readme" file.
Thank you!