A month passed, and I have been working on several exciting things.

Today let me show you previews of the final map.
This will be the last location you will reach in your journey, and it's at the core of the disaster.

It is located near the Pripyat river, north of the chernobyl plant.

Here nature decayed, died and transformed into the most sinister landscape.
I will not show some of the key places of this map, to not spoil the surprise. But you'll have a fair idea about the ambiance with these screenshots.
Once again it's a draft build, so detail quality is average. 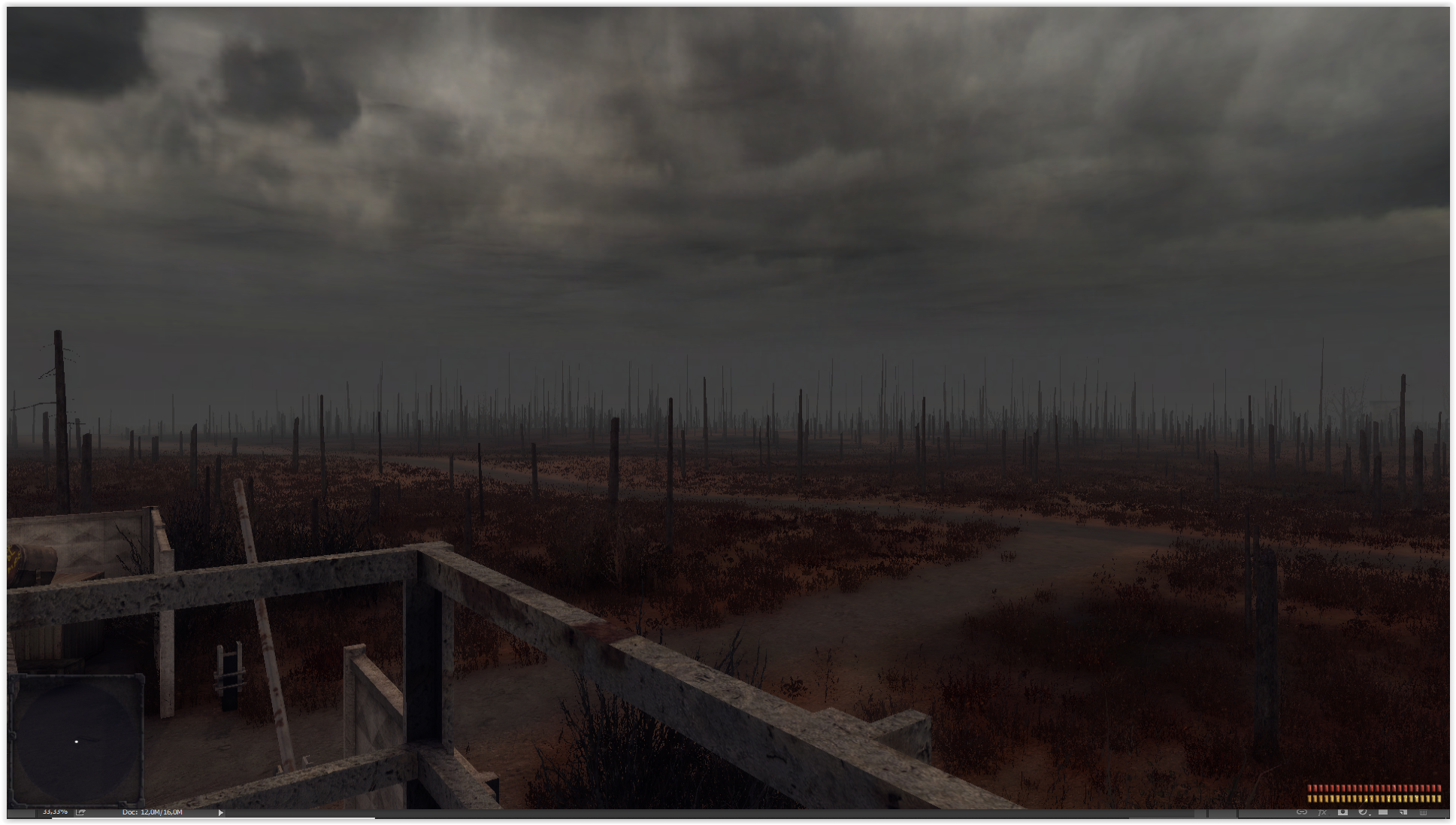 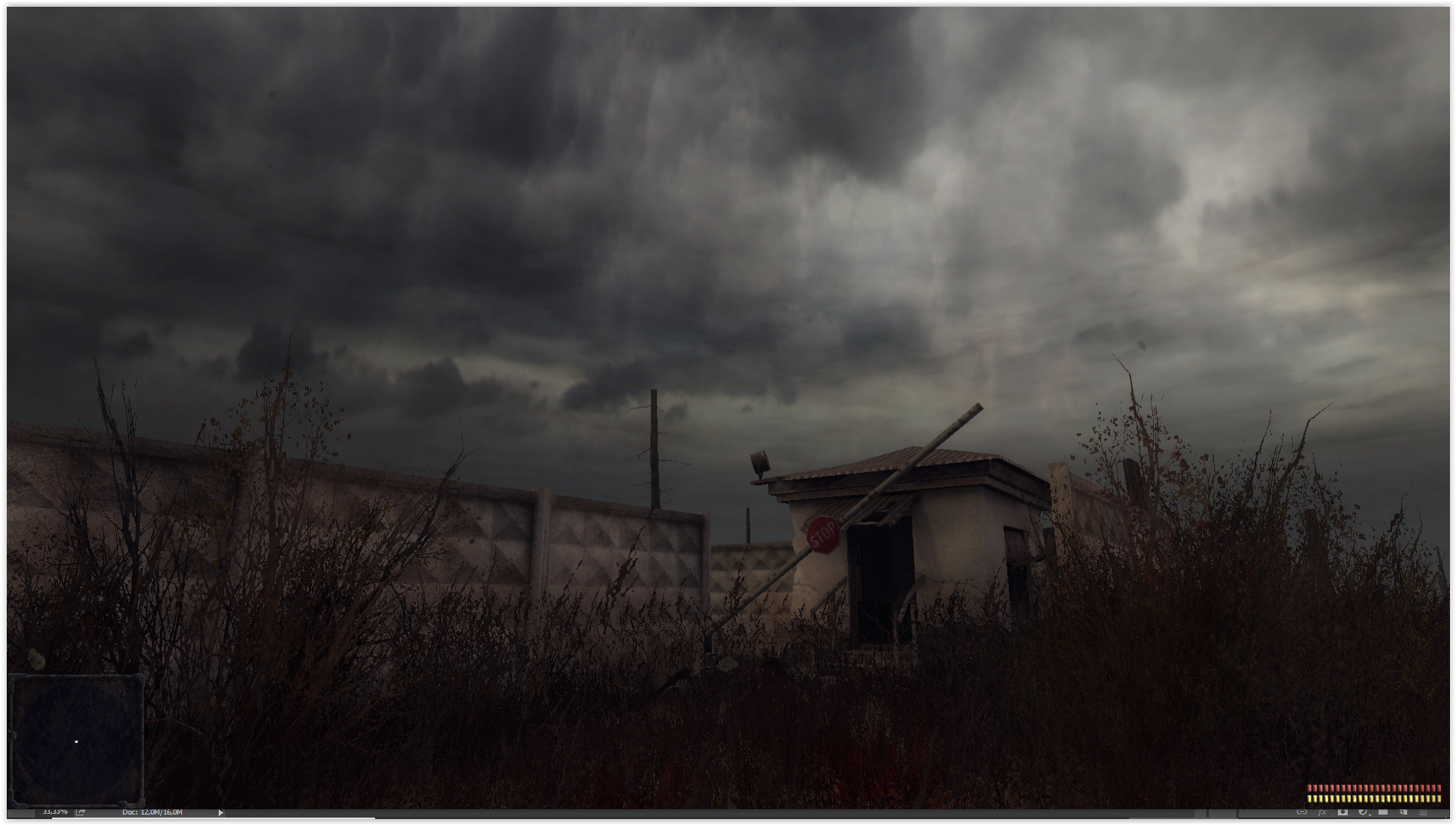 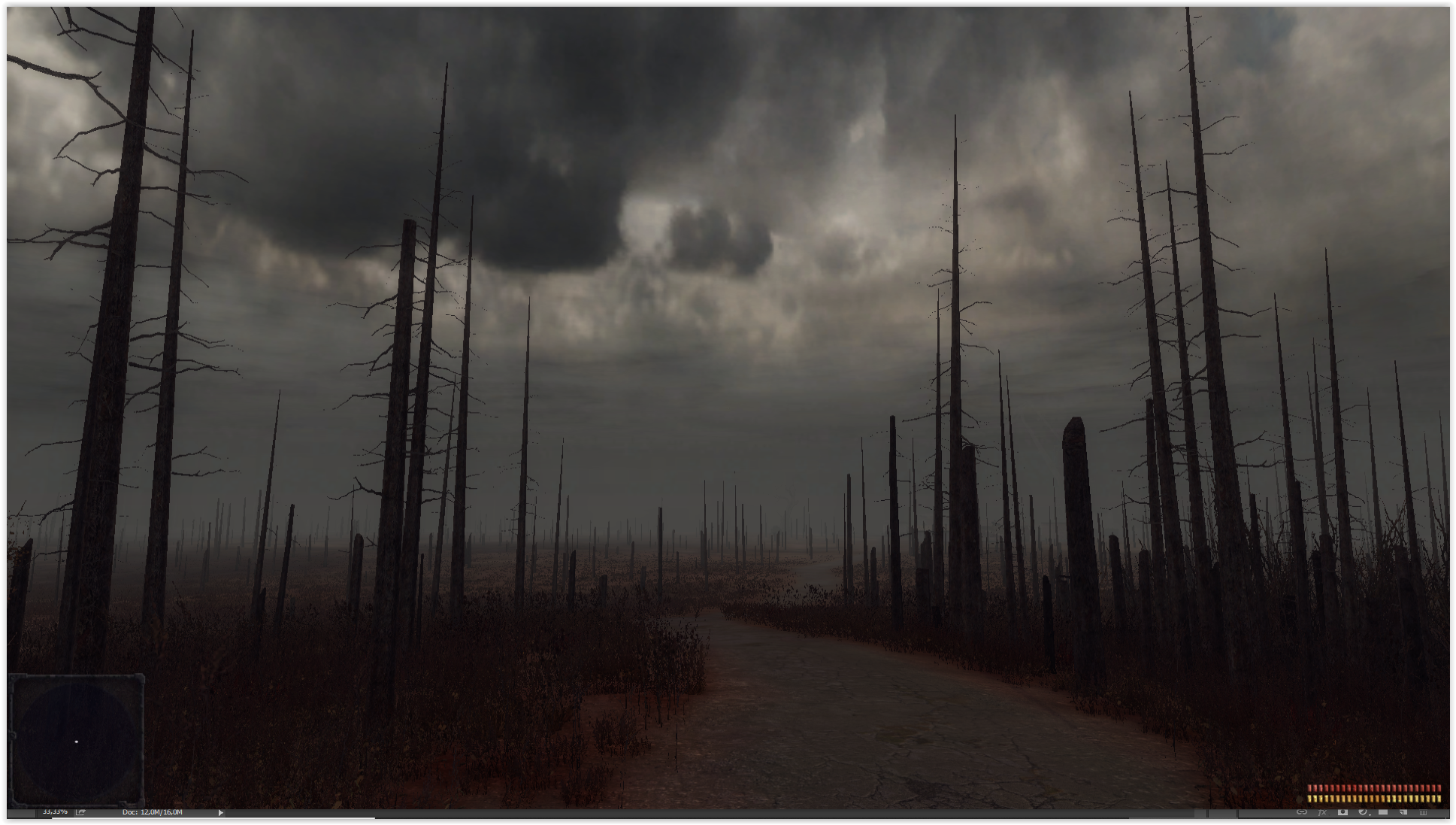 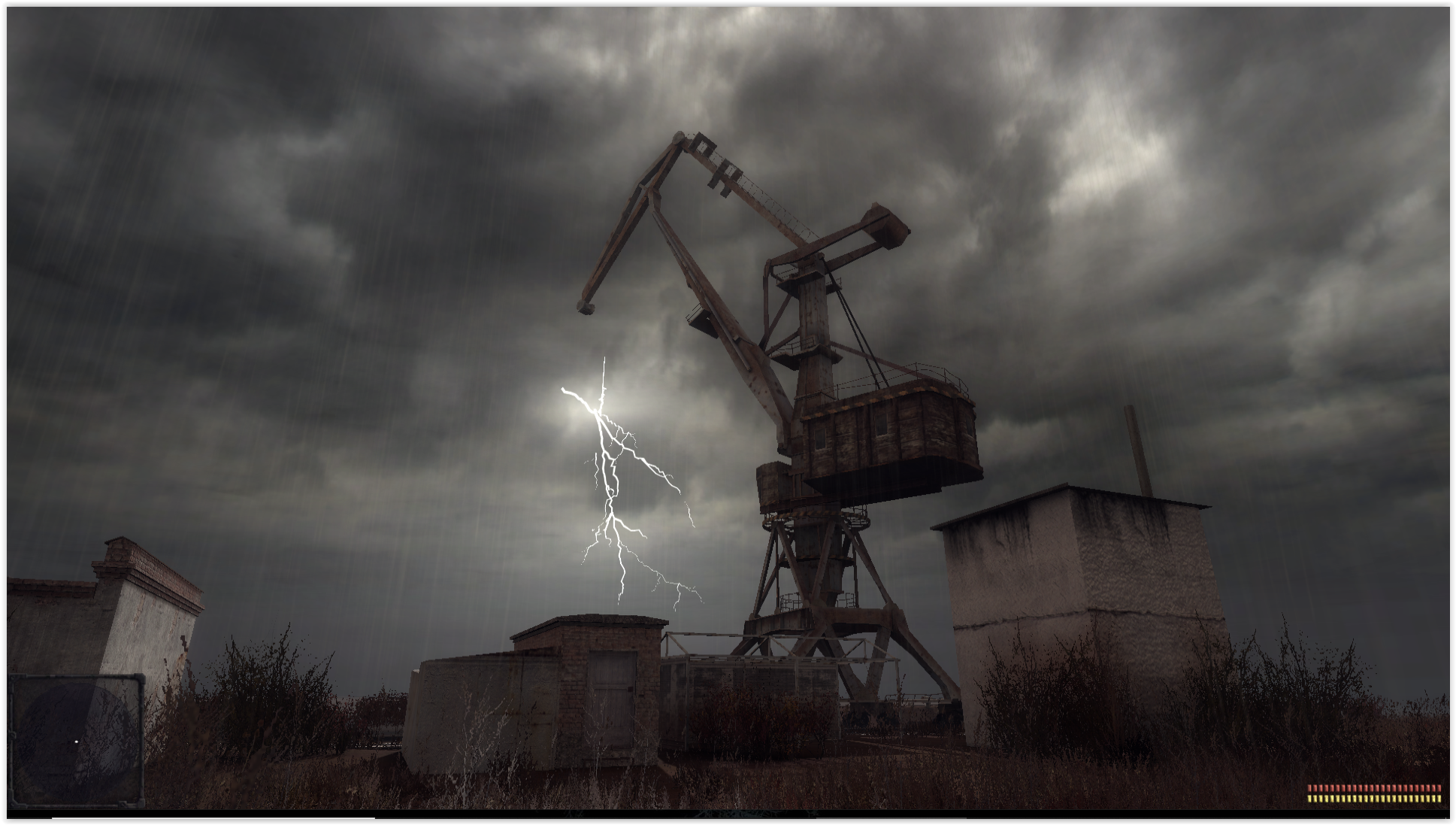 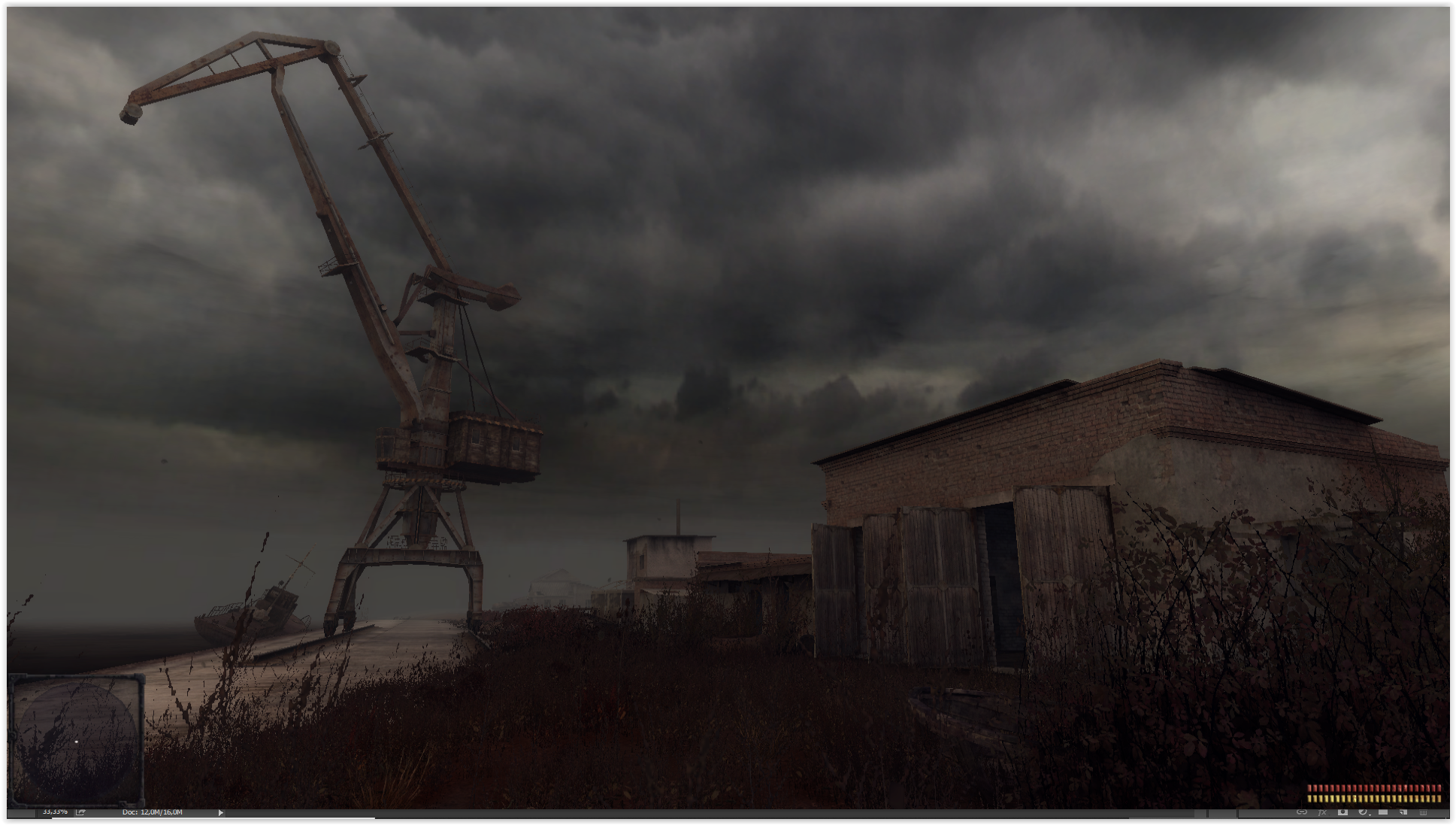 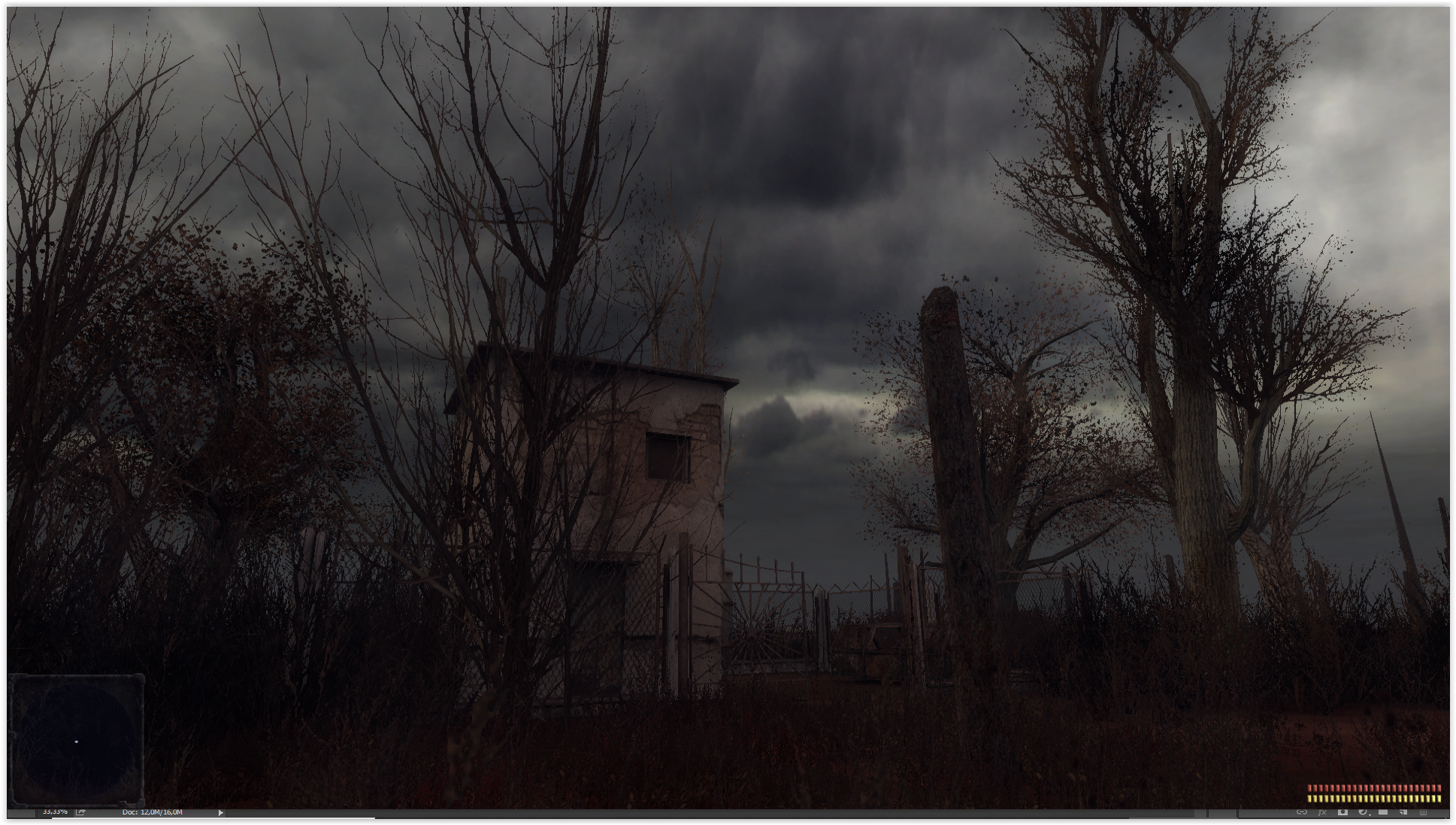 In other news, I also worked on gameplay and built the basic layout of the story.
One thing that I find quite boring now is the task / reward system used by all Stalker games and mods.

We know it very well now, and for me the system is getting old. Not to mention all these filler missions where you have to cross three maps to get an item that has very little to do with the main storyline.

So I decided on a much more fluid system, with no missions or tasks at all.
You will have to talk to NPC to get infos, and if they ask for something in return it will more subtle, and it will always serve the story. I won't try to add hours to the mod by assigning dumb fetching tasks.
Of course if you don't take the time to get all the infos, and skip some encounters, you will have a different experience. But you will be able to progress anyway.
I'd like players to get into a story, not into a missions system. Well we'll see how it works when the time comes, it will certainly need a lot of testing.

Other news, I am adding a new beast. I just finished modeling it, and it looks very promising. It will be the biggest and most dangerous thing you will ever met in the game.
What is it ? Let's wait until next month, hopefully it will be ingame, alive and kicking.

Man, I love how barren that landscape looks, it's something not often seen in STALKER mods. Question will there be English translation on release?

Yes, the main version is english.

Haunting! Hopefully there will be some cosy places to drink vodka in.

Very stunning. Cant wait to try this out!

Oh this looks beautiful but also very eerie, reminds me of WWI no man's land. In combination with a gameplay/story overhaul, I can safely say I'll dump hours and hours into this. Excellent work so far!

This sums up the feeling exactly. The trenches of no man's land.

Fantastic as always, glad you got things worked out.

Waiting for that beast.

The dead forests looks fantastic! It's really eerie and very fitting for the Zone! Well done!

That forest gave me some The Road vibes.

thank you for strippin those trees might even bump frame rate. thanks for your good work.....best regards...

Looks like no man's land (ww1) on a grey evening.
Love it!

there will be cooperatives?