Gunslugs 2 work should be wrapped up this week, the final, FINAL, boss is being added the minor details are being polished, the i's dotted, the t's crossed.. it's happening!

Note: Vote for Gunslugs 2 on Greenlight

If all goes to plan, I should be wrapping up the work on Gunslugs 2 this week. The only big thing left to add is the final boss and some animations and "the end" stuff.

There are still various small things I might change and add in the coming weeks, but basically it makes the game feature complete and I plan on starting the porting to iOS and ChromeOS versions at that point.

This past week I've mostly put my time into fixing a bunch of small annoyances that I couldn't ignore any longer. Small things like having the camera show more of the level in-front of you when you drive a tank, or the statusbar showing a heart-icon while you carry a shield is now changed to actually showing a shield icon.. it's silly minor details that take very little time to do but it's also something you normally don't want to work on while creating a game. 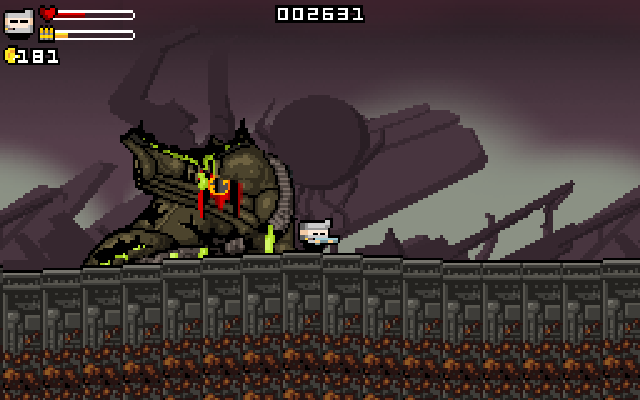 The upside of all these small things is that I had a real sense of being productive while my list of "fix this!" stuff kept shrinking at a very fast pace. I also did the graphical work on the final world (check the short video above) and wrote the code for some nice new "slime-bomb" shooting obstacles that you'll find in the last world.. they are seriously hard to defeat but the last world should be a challenge.

Now you might think that the release will be soon, since the work is close to being finished, so that probably needs some more explaining.

Gunslugs 2 will be released around mid-January 2015 on Android (and android-consoles), iOS, Windows, Linux, OSX, and ChromeOS. Part of the reason is that I still need some weeks to port to all platforms, I'll also will try to get some early builds out to the press and all that takes time and planning.

Another, big, reason is that November and December are terrible to release games in if your marketing budget is close to zero. All the big companies are releasing huge games with huge marketing budgets (think millions of $$$), besides: it's holiday season! so a lot of people are actually not even playing games !

Basically releasing Gunslugs 2 now, would be like shouting "hello world" in my backyard. I might get some attention from people who happen to be nearby, but most people in the world won't even take notice. And that would of course mean I worked for 6 months on a game that hardly anybody will play and that will definitely not be a source of income for me.

So while I develop the final boss for the game, I have my own "final boss fight" to attent to, and that is trying to create a buzz for Gunslugs 2, getting some PR going, working hard on getting the bigger game sites talking about Gunslugs 2 (positively) and if all goes to plan I might actually earn some money covering the costs of development (at least 6 months, preferably more cause I'll need time to work on the next game as well).

Of course you can help with all that ! if you happen to do "Let's play" video's, contact me! or if you got some cool fan-art, tweet to OrangePixel and it will get you some retweets and love, and if you actually write for a big game site, I can get you a review build in the coming weeks! ;)

Love the game man. Best of luck with it!