You've probably heard about Dead in Vinland's all new combat system. Will you kill or be killed? It's up to you.

Let’s start by the basics: our fight system is turn-based, and is limited to maximum 3 vs 3 fights. We want our fights to be tactical, but quick. They should not break the rhythm of the game, since you have many things to think about in the management part of the game. We didn’t want the fights to be too deep and complex, but interesting enough so that they are not seen as cheap and boring.

A hard balance to get, sometimes you must avoid adding too many seemingly good ideas to keep the system in line with the initial vision.

The battle takes place on a small grid: each party has its side (always left side for the player, and right side for the enemies), and each character has its associated line. You don’t have to move your characters vertically, and there are no grid-targeting system involved.

Instead, we have back and front rows. A character is either on back or in front, and the skills target characters on specific rows (or on any row).

We thought this system integrated well with the idea of characters protecting other weaker ones, in a small scale melee.

So of course, every character has a skill to switch row, at the expanse of 1 Action Point. And some skills force you to change rows (charge, repel, …)

Each character has some Action Points each turn, which he can spend to activate skills, or move. Each skill has different Action Point costs and targeting, so an optimal use of this Action Points pool is key to success.

You also have a special action to “end” your turn without spending all your Action Points. You’ll lose remaining AP, but you’ll get a +1 AP for next turn… So it can be interesting, if well used. 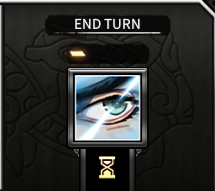 During a single turn, each character will act once, in order of their INITIATIVE, which can change during turns thanks to buff and debuffs.

The battle ends when all characters on one side lose all their Health Points. Concerning HP, we decided to separate the injury state bar that you have during the game from the actual HP of a fight. Consider fights’ injuries to be short-term, and injury bar to be long-term. When a character loses all his/her HP, he is rendered KO.

Instead, the system works like this. The HP are divided into 2 rows: above 10 and under 10. Above 10 are “armor” HP. You can lose them all you want, it won’t have any effect on your injury state. But if your HP go below 10, for each HP lost, the character will gain some injury after the battle ends. For now, we scaled it so that if you lose all your HP, your character will gain approx. 20-30% injury. And lest we forget, 100% injury means the character’s death.

Besides injury state increasing, the characters also gets a chance to get a special WOUND Trait. The more HP he loses, the deadlier the Wound. It can range from a sprained ankle to a severe head trauma. 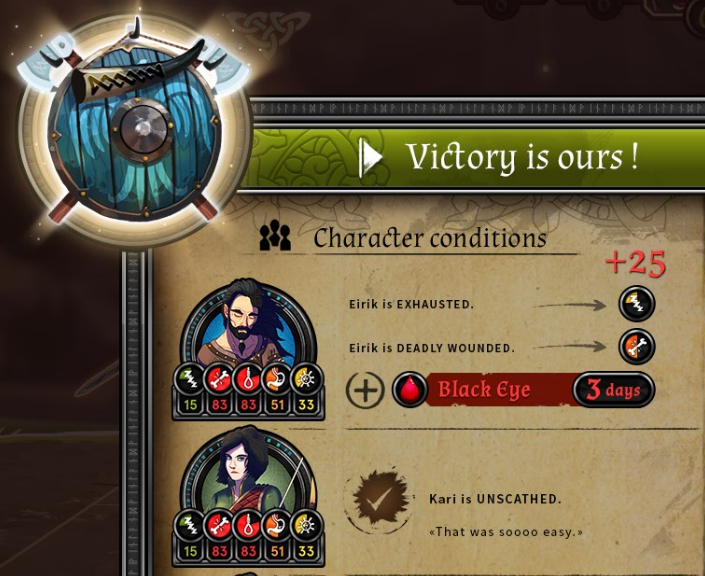 That’s it for now! Next time, more infos on the skills and characteristics during battle.