Ekuator Games launched a Kickstarter of their game, Celestian Tales: Old North juat barely three days ago. In their first update today, Lucienne Leroux was revealed as the fifth playable characters out of the six that will be available in the game. 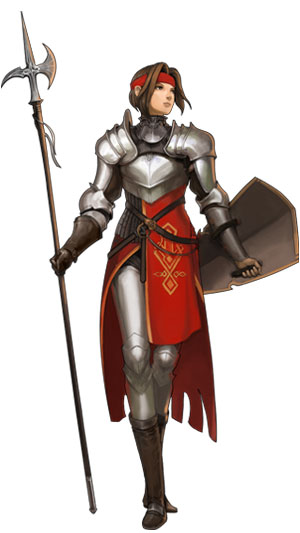 Lucienne was born to be a knight. Her family never even considered any other paths for her. Leave the dresses and the balls for women of other houses. A Leroux sits on a saddle, not a throne. A soldier since the day she's old enough to walk, Lucienne is well versed in all aspects of war. From scouring armors to keep rust away, to grooming a destrier and even riding in a lance formation with the famed Leroux Cavalry. Her talent has gained her the favor of her uncle, the Legendary Ravager, Severin Leroux, patriarch of the House.

In combat, Lucienne is a living fortress of shield and spears. She has the highest defense among the characters due to her use of the heavy shield. She is primarily a Guardian, which means her powers allow her to protect herself as well as protecting others. House Leroux does not breed knights in shining armours; they breed trained killers who will do anything to win a battle. This is shown in Lucienne's secondary role as a Trickster, which allows her to lower the fighting ability of enemies by utilizing combat maneuvers such as targeting legs to slow enemies down, or using shield bash to stun a foe. Combined with her Guardian abilities, Lucienne can really lock enemies down.

Find out more about Celestian Tales: Old North on their Kickstarter or Ekuator Games' website!