So what is F.E.X (Forced Evolution Experiment)? We'll talk about our upcoming game that will be available on August 24th for PC & Mac.

We're proud to announce that F.E.X (Forced Evolution Experiment) will be released on August 24th 2017 and it will be available on Steam for the PC & Mac. I'll give you a heads up right now: We're making a giveaway!! More on that on another post. We'll make this one to talk a little bit more about our game: 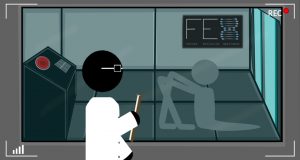 F.E.X (Forced Evolution Experiment) is a game we describe as an Action-Adventure game with some puzzles in it, where the experiment T1M manages to escape from its lab capsule, and it's aided by Frank a security guard that sees it through the security cameras so T1M can escape the lab. From there it has to not only solve puzzles, but to avoid and escape other experiments that are roaming the areas of the facility. Use the elements of the lab itself to make your way through and try to find your way out of that place.

The game is inspired by gems such as Bastion, and of course a lot of people will notice it Portal (more specifically the "Aperture Investment Opportunities" videos, we love them!)

Well that's it for this post, in the next one we'll talk on the design of F.E.X (Forced Evolution Experiment).