Tiberian Odyssey internal beta 2.0 has been being given a final polish in the past couple of weeks, and aside from some substantial bug fixes, we've been rethinking the gamemodes present in TO. It used to be that there were a dozen of them, each with a different 2-3 letter acronym to differentiate them on the map select screen, and most modes were pretty much the same. Now things are different.

Right now, we've got three modes. Just three. First, is Deathmatch (DM). It's the basic C&C type of game, you harvest Tiberium, you tech up, you build units, you kill stuff. it's the general RTS recipe, and as such I'm going to go out on a limb and say that you pretty much already know what it is and how it works. Some civilian buildings can be captured for special abilities or units, such as Black Hand vehicles and Mutant militants, and both sides have a set of Superweapons at their disposals. 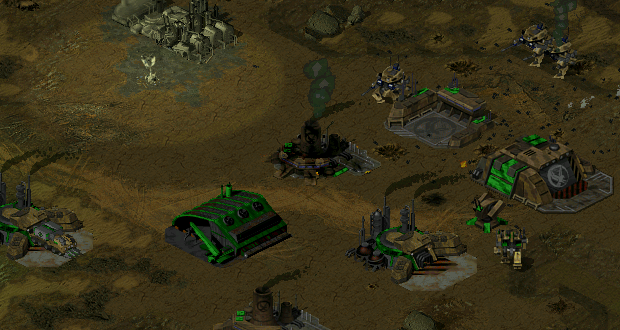 (Quite straight forward, really - It provides the full scale tactics (ie: me losing a lot) of TO)

Second, is Infantry Wars (IW). Here, infantry are much more precious than in other games, as players must use infantry to a much greater extent. A bigger importance is given to veterancy here, and veteran squads of infantry can turn the tide of a battle in your favour. The battle is controlled from your Mobile headquarters, which can deploy into a Bunker Barracks capable of training infantry. This is the only building available and thus it is paramount that it be kept safe, it is, however, mobile and can be packed up and moved elsewhere should it appear that it is being threatened. 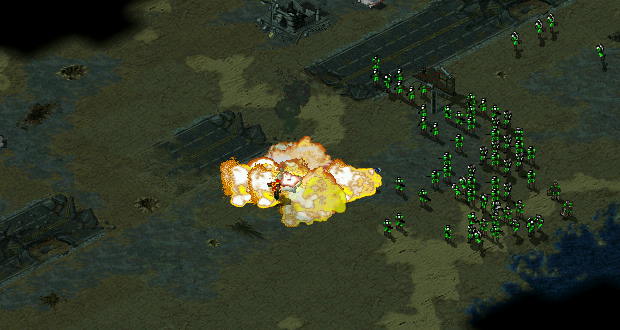 (Though sometimes throwing more men at it might work)

The third mode is Capture the Flag (CTF). This mode is more drastically different than the other two.
First, base building is severely different. There are a maximum number of buildings you may build of each type, and once these have all been built there is no way to build any more. Second, the unit list is shifted much towards offence, or at the very least using vehicles and infantry as defence. The Ares mech is replaced by the Hover Tank, the Tick Tank is replaced with the Scorpion. Airforces have both been trimmed down to a Carryall for each, while infantry remain as the usual force (except for GDI losing Jumpjets). Resources are gathered from crates, which spawn at predefined Cargo sites. These crates can also contain bonuses and units, meaning that controlling these sites can spell victory.

(Whenever you start a CTF map, this is what you'll see)

Most importantly, the only building that really matters is the Flag. The flag is indestructible. The only way to win is to capture the flag. You can have all your buildings sitting nice and pretty in your base, but if you lose the flag, you lose the game. 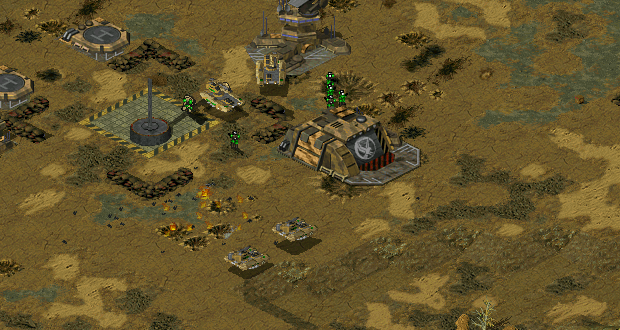 (The flag graphic is currently a placeholder, if we can get a good concept together I expect it will improve)

These are the three modes which will be in Odyssey, though if you have some other great ideas for a forth mode, or have a good improvement for an existing mode, we'd be happy to consider and sensible suggestions.

Aside from the gamemodes, the maps are still being revamped and replaced to improve the gameplay of TO over all, bugs in the executable are being ironed out, and with some really nice building-related work being done we hope things continue at this sort of pace towards a release.

These are the important developments from the past month (or so), so that's us until the next time - about a month from now. With the new graphics being added and the snow theatre getting to stretch its legs for once, there ought to be something to show for it.

Some sort of assault-type gamemode would be awesome. Think like a campaign mission but multiplayer. I don't know if TS's engine can do it, but one team would start with a pre-established base and restrictions on unit construction(Maybe even battlefield expansion?) while the other team has to establish a foothold then take X objective. I think that'll sort of fill out the gamut on awesome gamemodes.

This is shaping up really nicely. Kudos for adding CTF to TS.

Out of interest, has anyone in the TS modding community been able to address the issue of slowdown generated by numerous explosions, particle systems and/or an excess of units on the map?

Thanks for your hard work, looking forward to enjoying the fruits of your labour.

Unfortunately it seems slowdowns such as the ones you mentioned all are problems of the game istelf regardless of how good the hardware can be which is fustrating, infact even more fustrating can be that particular OS systems, such as 64 bit ones with higher end spec PC's can sometimes make Tiberian Sun unplayable with huge slowdowns though there are a few tricks that can be done to minimize slowdowns (on new and older systems)

Ah, so it's a symptom of hardcoding then? That's unfortunate.

Any work being done on the AI? I suppose it's too much to expect a competent CTF opponent? ;)

I have a few theories cooking up on how it can be done ;)

try make it so in infantry wars you can build defensive structres(turrets can be nice...) because having no base at all is... i dont know gives me the feeling of CNC4 which i hate...

The problem there is that players will then have to throw hundreds of infantry at a spot to overcome it. We considered the possibility of giving the players deployable defences or a limited number which they're allowed to build...
But there is still the problem that it makes the infantry pretty useless.

Making it C&C4 really isn't the plan, so we'll make every effort to keep things more interesting than that.