In this week's dev blog we talk about the progress we are making on the strategic worldmap as well as our new feature-list subpages!

Finishing all core mechanics is our top priority right now and a lot of work is getting done on the underlying mechanics of the strategic worldmap. Unfortunately, this also means that we don’t have anything flashy to show you this week.

In the meantime we gathered all the most important information of previous blog posts into 3 detailed feature lists. Each feature comes with a status so that you can see at a glance if it has already been implemented or is yet to come, which should give you a good idea of where we are at with the game.

Worldmap Progress
The worldmap is in the center of our attention right now as we implement all the core mechanics. Most of the work is already done and we now focus on the strategic AI that guides individual factions and the mercenary contracts that will be offered to the player on various occasions. 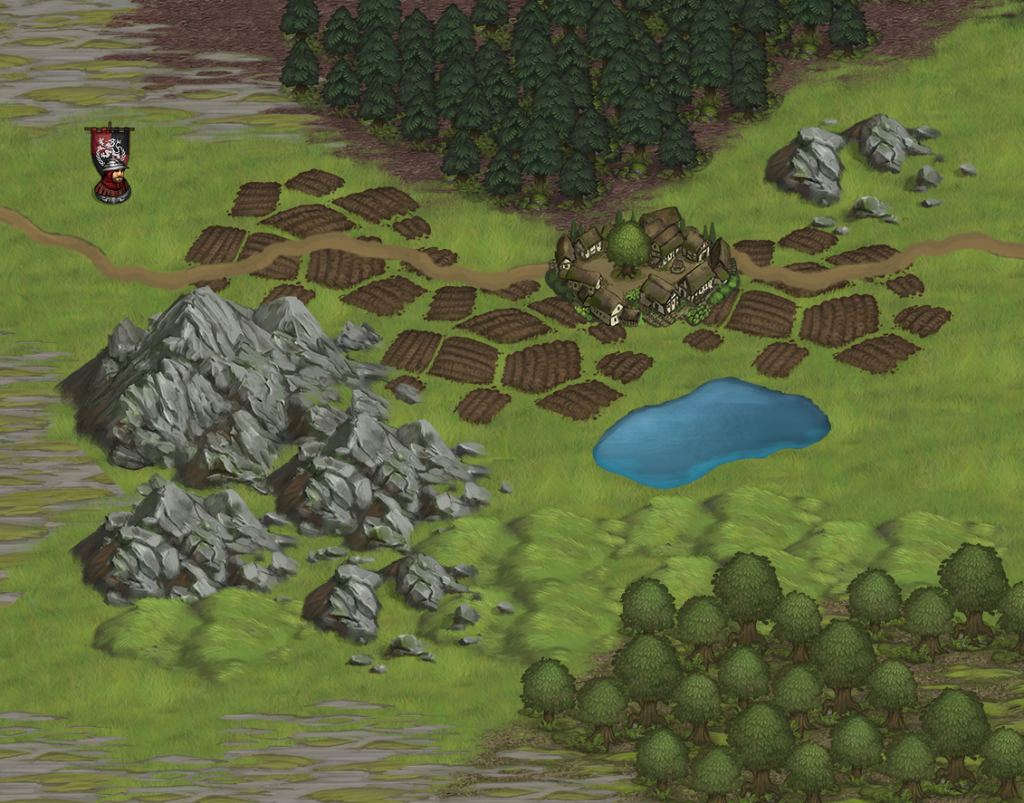 At the same time, we’re doing a rework of the worldmap visuals. The look we had for the worldmap wasn’t entirely satisfying to us, and neither was it flexible enough for our more ambitious goals. We’re still experimenting with a new style, but it will look something like in the image above. Instead of trees and similar being painted directly onto tiles, those tiles now only cover the ground while objects are independently placed on another layer ontop. This allows for more natural and less repetitive looking landscapes and transitions between different terrain types. More importantly, it also gives us more flexibility for dynamically changing the world, such as forests slowly becoming corrupted or fields being burned as the nearby village is raided. We should be able to share the final look with you in the next few weeks.

With no less than 34 blog posts to read so far, gathering information about the game can be quite a bit of work. Since our Early Access release is also coming closer we think this is an opportune time to get all the most important information in one place.

We’ve therefore extended the “Features” category on our website with three additional feature lists containing more detailed information about aspects of the strategic worldmap, the tactical combat and the factions in the game. Even more importantly, you’re also able to see what feature has been implemented so far and what is still to come. The feature lists will always be updated when a new feature is implemented so that you can follow the progress we make. Every feature that is marked as “implemented” will be in the Early Access release guaranteed, so the list can also help you to decide whether to get the Early Access version or not.

Head over to the three feature pages to learn about where the game is at and what is still to come:

If you have any questions or ideas, just post them in the forums!

*pat devs on shoulder*
This is going to be awesome