"Mapping" for Minecraft is WAY faster that mapping for Half Life. Why? because in Minecraft you don't care much about detail in the map...

Yes, the progress of the map has been going pretty fast and pretty satisfying. The first Nether part will take a while because of trigger_once-es* made by using redstone. Yeah, redstone stuff is impressing, but can prove pretty complicated to make- most of the time you wander how to make the "machine" as compact as possible and with no errors. 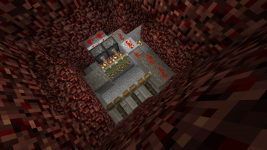 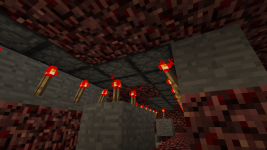 Currently I'm working on an area, where the player will have to sprint for his life, while traps activate from above and below. It's really entertaining for me to test the area. It's like the whole building is collapsing. There is a just one of the traps in WIP state (damn thous pig-men): 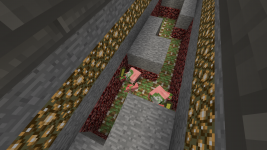 I'm really itching to show a video of the area, but I said in the description of the map why I don't want to do so.
*trigger_once: In Half Life (and maybe Half Life 2) there is a non-solid, transparent and invisible block entity that when entered by the player, it activates something only once. If the player enters it a second time, nothing happens. In Minecraft it's a bit hard to make the same thing using pressure plates, because something must get activated from the plates that starts to power the redstone (I hope you understood that last part...).

Mapping for HL also allows you a lot more room to work with and you can make your maps do more. Using Minecraft as an engine for a mod is pointless as you have to work your ideas around the engine. In Source, Goldsource, CryEngine, UDK or whatever else, you can do whatever you want without having to worry about whether or not you'll be able to implement what you want to do.

That's right. That makes making "triggers" in Minecraft an achievement for the "mapper"- with so many limits to make something complicated.

If you look up redstone logic gates there are circuits that can be tripped only once. any more passes over a pressure plate (or tripwire, don't forget they added those now) won't activate anything.