Here is the latest edition to D-day, Capture Points! Which work in a similar way to tech buildings but unlike them "cap points" don't require engineers to capture them, instead you just have to garrison them with rifle or anti-tank infantry to gain control.

The buildings themselves are also indestructible! However they use Ares urban combat logic, so if there are any infantry garrisoned inside they will get damaged instead, essentially turning the garrisoned troops into the buildings health. Once the troops inside have been killed the building becomes neutral again & so can then be captured by someone else.

The benefits of this system are that the cap points will last the entire game & are easily captured but also just as easily lost, so expect them to change hands many times during a long battle. 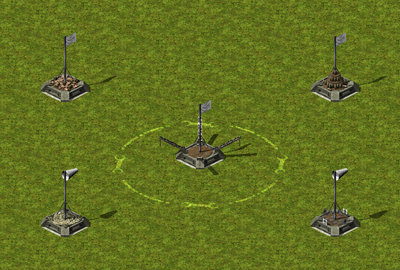 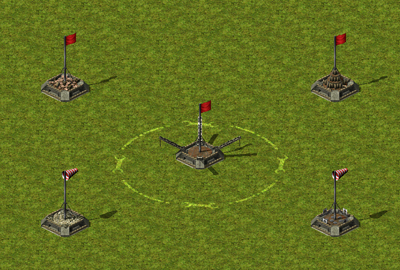 They are, starting top left
Supply: Once captured the supply point will boost your economy, giving you a small amount of credits every few seconds.
Artillery: This cap point gives you access to a small artillery strike superweapon.
Repair: The repair point will slowly fix any damaged tanks that are within it's radius.
Paradrop: The classic paradrop, once captured you can call in a small group of reinforcements to anywhere on the battlefield.
Minedrop: Capturing this point gives you the ability to call in a cargo plane to drop a mine field anywhere on the map.

They should add some more interesting & tactical battles to D-day. The AI will also take full advantage of these buildings, on harder difficulty settings they will also fight to control all of them on the map.

This is a clever ruse.

Oh thats nice :D I had a simlare idea but i guess you beated me to it :P ,But are you going to add more in the future ?