In this first update I show some features such as how the world works and will work, a mostly complete inventory but most importantly, farming. 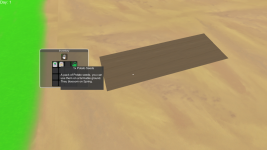 The inventory is composed of slots, each item you gain will occupy a slot but if they are the same
item they will stack up to x99, later on I will add an option to upgrade the inventory by perhaps
buying a bigger bag (so you will start with fewer slots and upgrade it to be as big as the one shown
in the screenshot or maybe a little more).

The little hand slot which stands above all the other is the item you are currently holding.
You can hold any type of item and it is necessary to do so before you will be able to use it, however
you can hold entire stacks.

While it is almost fully working, it is not finished yet: There are some minor bugs and it is also
missing some features, like dividing up a stack in two slots before reaching x99 or dropping away
an item. 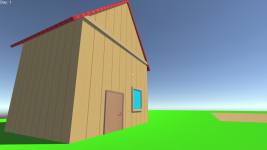 Even if the looks are definitively not final, the world is built to be divided into different "Maps":
The most notable difference later on will be between outdoor maps and indoor maps, since inside
any building the time will "freeze", not so important right now as there is no time but only days
advancing when you decide to sleep.

When switching between maps, the game will keep your inventory, the state of your crops outside
and also keep playing the music (if the tracks are the same between two maps) without resetting
them, at some point in the future there may be loading screens if the need arises but it should be still fluent.

Even if this feature is complete right now, it is still a work in progress as it will need to keep track
of future things I will add eventually, for instance, containers. 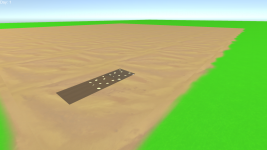 Since this is a farming game, farming is an important feature which will be used quite often during
the game.

If you played any Harvest Moon game, the process to grow a crop will be pretty similar:
First you equip a hoe then you go to a farmable ground and start digging, you need to dig one
tile of ground for each seed bag you want to use, then you can water the freshly planted seeds and
after some days (depending on the plant) it will blossom.

While you can already grow two crops already (Turnips and Potatoes), even this feature is not yet
fully completed.
Even if you can water up a dug ground already, the plant grows up even if the soil is dry since I still
need to add a scythe to handle dead crops, different kinds of crop are also missing (which behave
differently than Turnips and Potatoes), like those crops whose fruits can be harvested but the
plant itself stays planted until cut off or its season ends;
Also there are no in-between stages yet, it is either their seeds form or a fully grown crop
but this is just a matter of modelling them, which will be done eventually.

You can see the current news "In action" in this short Youtube video which shows me planting some crops:

Stay tuned for the next update!