I finally got round to releasing the full version of the game! Enjoy! 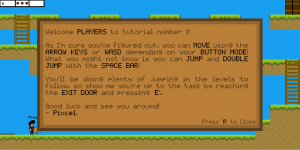 Hi there everyone!
It has definitely been a long time since I've been active on IndieDB, probably about 5 months or so? I worked on this game day and night in my attempt to finish it for my college assignment, then when I finally got it done (back in late May/early June) I got swept up in the next assignments that they wanted that It completely swept past me to release the full version of the game on here!

Fret not however. today is the day you can finally explore the game in it's full glory. It isn't the best thing in the world, but I think I did quite well for myself with no experience in coding or game art before I started the project. So as my first project I am really proud of it, despite all of it's shortcomings! 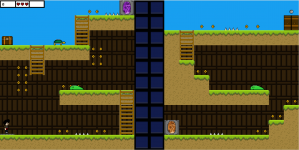 Now a lot of things have changed within the game since the last news post and since the last time I made a release. All for the better mind you.
The biggest change which you may have noticed is the art! I really wasn't happy with how rough and amateurish the original pixel art looked, so I took the time out to go back and redo everything, adding in a lot of extra detail and working with the colours. I think if you take a look at these screenshots next to the old ones you wouldn't even think that they were from the same game!

Besides this I went ahead and included just about all of the other features I had planned to and stated I would in previous news articles, such as extra animations, dialog cut-scenes and even a few tutorial levels. These were much needed, as the learning curve as people jumped straight into the game seemed to be much too difficult for some.

Throughout the development process I wanted to create something that would have sustained longevity and a lot of exciting features in it, even though it would have to be small due to the time scale. Inevitably, as it is a platformer, I didn't want to just make a bunch of easy levels like there always is at the beginning. I wanted to make a challenge. Boy, I did it too. As you find yourself getting frustrated as you repeatedly die, over and over, you'll experience a real sense of accomplishment when you finally make it past the obstacle and move onto the next level, this rewarding aspect was a great bonus for me, as not a lot of games give you that in my opinion.

So in terms of what you can expect to find in this final release, here is a list of features within the game:

I hope you take the time out to check out my project as I really poured my heart and soul into building it! Whilst it's not amazing, I would really appreciate it if you gave it a try and also gave me some feedback that I can use when working on my next project to build my portfolio.Thanks for reading everyone :)You can download the full game here: Indiedb.com 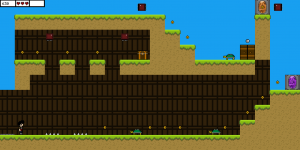