The Fairy Tale mod for Civilization IV BtS has been updated to Version 6. This is a major update of the mod that has a lot of new cosmetic changes and other important updates as well.

In the land of the Savage West, where the sky burns red from the torment of souls and where the drums of war beat night and day, the mighty horror of Zuur is once again arising. Ripe for plunder, ripe for destruction, the East shakes and trembles at the name of Charzana, the daughter of darkness, the princess of Hell. "Hear!" she shouts from her Demon Hive. "Hear me, lands in the East! The Demon's daughter has come to oversee your downfall!" In the lands of the Savage West, the princess of Hell is preparing, watching, planning. "Hear, O nobles of the East, take heed! The time for revenge has come; the time for darkness, the time for destruction, pillage and tears. The Age of Iron and fire has begun, and the daughter of Hell leads the march!"

Charzana of Zuur, the princess of Evil, is said to be the daughter of the Demon King. She was raised by the Demon from the pits of Hell to lead the destruction of the world. In the updated scenario you will be able to play her and her nation as it conspires to bring the destruction of the Known World and conquer and destroy all that is pure, all that is enlightened Civilization. Now you can bring the Demon King's destruction upon the Known World and force the fall of the Empire!

Fairy Tale has been updated to Version 6. This is a major update of the mod that has a lot of new cosmetic changes (such as loading screens, buttons and loading hints), but also several new units and buildings. One new feature is that you can now play the Dark Side in the Great War between The Empire and the Demon King as well! Check that out in the Imperial Scenario.

Fairy Tale V6 is now counting 124 MB in zipped format. Compare that to the 27 MB Fairy Tale Version 1 spanned back in February! Work is indeed progressing, and you can help out too; by submitting comments, suggestions, checking and playtesting the updates and also by voting for Fairy Tale right here on ModDB. The voting function is found on the main page in the right column!

*Added a new Great General for Crystallin and Erezon. The model is by SaibotLieh.
*The Flag design is now the same for all eras. No more ugly hanging, ancient flag here. No, siree.
*Changed the Loading Screen from the Vanilla.
*Created some mod specific Loading Hints. Also wrote some of the Civilopedia. Some of the leaders are now done, and all of the Fairy Tale nations.
*Started writing the Fairy Tales. All hero descriptions will include small Fairy Tales. The first one can be read in the Hellbeast Civilopedia entry.
*Ajidica has written some unit descriptions that can now be read in the Civilopedia.
*Changed Leaderheads for an Arcana leader as well as the Dead leader.
*The vanilla Aqueduct didn't fit. Changed it to the Tavern. Its functions are still the same. Further, the Barracks were renamed "Warriors' Guild".
*Changed the look of the Fort Improvement to a proper castle.
*The vanilla Grocer was renamed "Merchant" and the terrible building updated to a better one.
*Added the World Wonder Seadragon's Lair where you can train the powerful Seadragon unit, which functions as regular dragons but is stronger and has no bad effects when fighting at sea.
*Heightened the Pirates' combat value to 6. It was crappy for some reason and couldn't even blow stupid Caravels out of the water.
*The Protective Trait now gives a 25% Espionage bonus.
*Enabled Civic The Senate from Tech The Empire.
*Imperial Watch Base military production bonus heightened to 75%
*Game speed modifications done. Great People birth rate turned down, and City Growth turned down a tiny tad too.
*All Warrior models were changed (except Crystallin). Good bye club-wielding naked men, and hello bloodthirsty, barbaric-looking axefighters!
*Changed between the models of the Galley and the Viking Longboat due to the wrong-looking sails for a Longboat.
*At Tech Cavalry Tactics, you can now train the Giant Black Scorpion at the Beast Farm.
*Did some new Tech Buttons for most techs. Just a few vanilla now.
*Gave Charzana of Zuur trait Aggressive instead of Industrious.
*Worked on the "Imperial Scenario - The Great War". You can now play the Dark Side too, represented by Charzana of Zuur. Victory condition is Conquest, but there's no baddy to kill if you play the evil, so you just need to conquer the world. Added more units and cities for both sides, and developed the diplomatic situation a bit. The Dark Side now constitutes a greater threat from the beginning of the scenario. 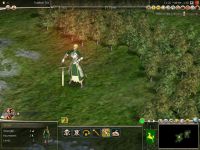