Here are the factions that will in this conversion.

The Kingdom Under Fire: Bersia at War conversion is planned to cover a large amount of Bersia, it will be roughly following this map: 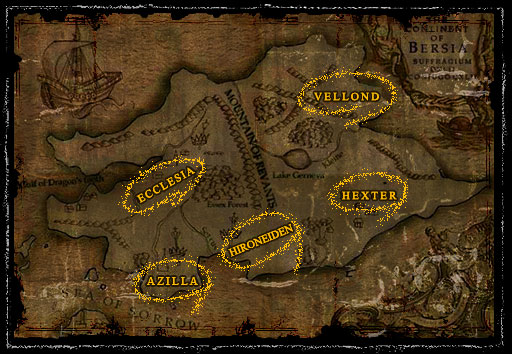 Each faction will have plenty of Leaders, Officers Castles, and Locations as well as having each Nation having it's own Troop Tree.

Note, if you play as a Human, you will not be able to recruit Mercenaries from Vellond or Hexter, ie, Humans can not recruit Orcs or Dark Elves.

Currently ruled by the ill-tempered King Saul. Though this kingdom follows the principles of the Ecclesian church, its standpoint differs greatly from Ecclesia since religious beliefs have caused the everlasting conflict with the Dark Legion. For the people of Hironeiden who must fight bloody battles for survival, the religious beliefs of Ecclesia may not be enough cause to make them devout believers.

Ecclesia is led by Pope Dmitri III, whose religious ideology states “Extermination of unconvertible barbarians and the unification of the Bersian Continent under one faith”. This zealous nation occupied Azilla while Azilla was divided over the king's throne. Ecclesia considers the Ancient Heart to be a demonic artifact, and thus will excommunicate anyone who speaks of, or attempts to learn about it.

Politically dependent on Vellond, Hexter is not an officially sovereign entity. It's population mostly consists of Orcs and Ogres. This area is ruled by Regnier, a human with mysterious powers. Another mystery is that Regnier does not try to take on Valdermar, even though he was strong enough to bring Orcs and Ogres to their knees. Despite Valdemar's trust and friendship, Regnier always stays neutral and apathetic.

Currently ruled by Valdemar. He somehow succeeded in unifying numerous nations of Dark Elves yet conflict still exists amongst them. Especially, since the Dark Elves are the most problematic since they relentlessly seek for an opportunity to throw out the half vampire King, who they consider racially inferior to Dark Elves. To prevent a coup d’etat, Valdemar sent out vampire regional inspectors to watch over the Dark Elves.