In this dev diary, I will be talking more about the dynamic nature of the Factions' world and how it is affected by the players.

Another great few weeks for Factions! Lots of functionality added and improved upon. We have also added a few new members to the team which we hope to introduce to you more formally in the coming weeks after they have settled into their roles.

If you have been following Factions or have read through our features list, you know that above most everything else, we want all of your actions in the world to have meaning. Every decision you make will change the world in some way. When you chop down a tree it's gone, when you mine out a resource node it disappears, kill a pack of wolves or a camp of ogres and they will not respawn. etc.. etc.. Everything is truly dynamic in Factions. The world is constantly changing and evolving. Some less-visited areas of the world will naturally become incredibly dangerous for players as wildlife is left to grow unchecked, while other highly populated areas will be much safer (besides the threat other players pose of course). As players and factions become stronger they will need to venture out into the untamed parts of the world to gather the more rare resources.

Imagine this scenario, a faction has become extremely wealthy by selling titanium armor which has been mined for months from within the faction's borders. Finally the source of Titanium runs out, while exploring, one of their members discovers a huge cache of titanium while exploring. It is about a ten minute ride by horse, the only problem is, the area is completely infested with trolls that have become extremely strong since they have been left alone for many weeks. The ranger also finds the trolls keeping a dragon, which (if slain) can yield dragon teeth, dragon bone, and dragon hide all of which are some of the best crafting materials available.

So the faction makes plans a couple days in advance, the faction leader creates a mandatory mission for all faction members to escort him to the spot the scout found. He sets a fair reward of gold coins upon completion and almost the entire faction shows up on the day of the raid. They create a few giant hand carts which will help them haul their loot and set off. While the pace is slow, they come across many lesser troll villages, stray elk, bears, even a small village of a rival faction which they burn to the ground and are able to kill and loot 2 players, kill 8 NPCs and capture 2 NPCs who will be forced into slavery (if they survive the journey to the main troll camp).

When they finally get to the troll camp, they fight through a dozen troll buildings, sustaining only minor casualties. In the center of the camp is the dragon which they defeat after a very difficult 10 minute long fight. The adventurers finish killing all of the trolls, take whatever loot they can use, and then move on to the business of mining as much Titanium from the area as they can carry. After a good hour of mining, they assign the NPC slaves to carry the carts and start for home after hearing from their highest level armorer that they will have enough titanium to last them for a week. That is, of course, if they can keep the roads to and from their city safe enough to continue to allow adventurers (customers) to traverse on their way to the wilderness.

This is the type of interaction and true impact Factions will allow it's players to have on the world.

We have just finished implementing an object aging system which allows for trees to grow and for buildings to age, fall into disrepair and eventually disappear all together. This is an important system which will not only keep abandoned buildings and villages from cluttering the landscape, but will also constantly keep up the need for resources and labor to repair buildings. Also completed just yesterday is the ability for items in your inventory to trigger abilities and for those items to have a charge count. This has been used for our blueprints which are one-use items. So an architect can specialize in creating high quality blueprints and selling them for a good amount to players with skill in constructing high level buildings.

Please keep in mind that all graphics are still in a pre-alpha state.
First the player creates the lean-to blueprint. 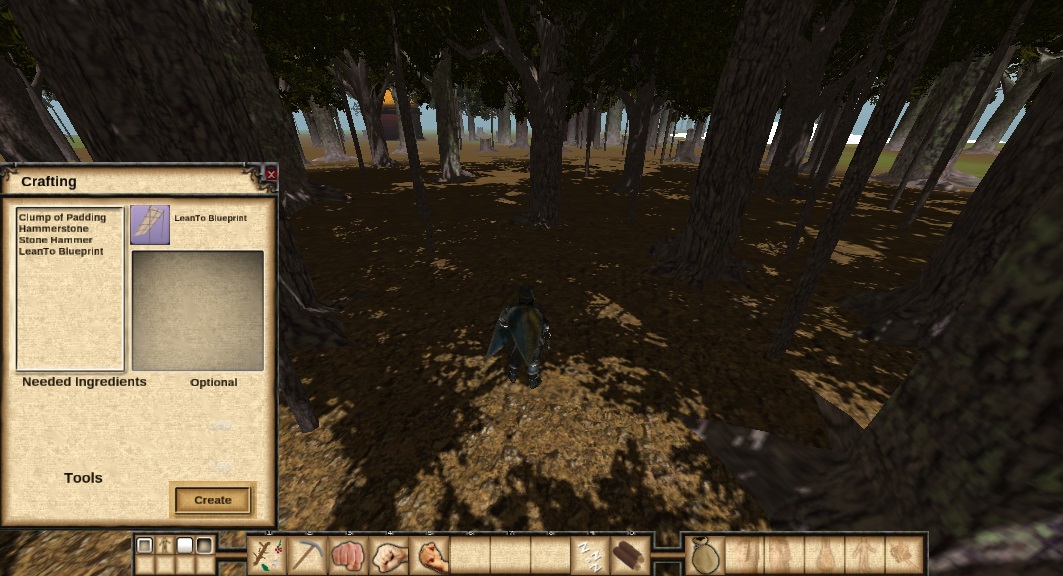 Next they click the blueprint in their inventory to allow them to place the item. 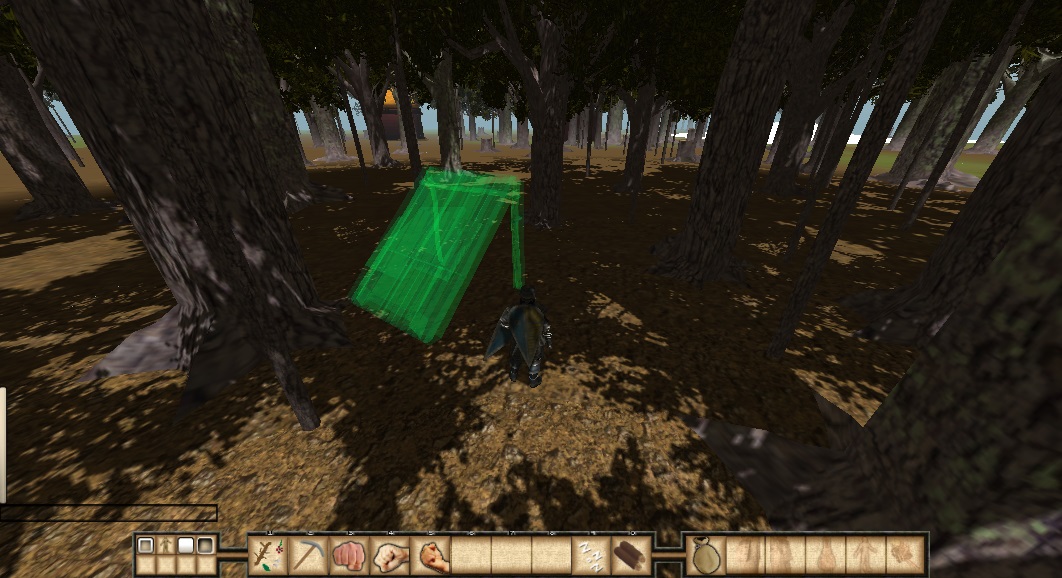 Now they gather some materials to build the building and begin construction. 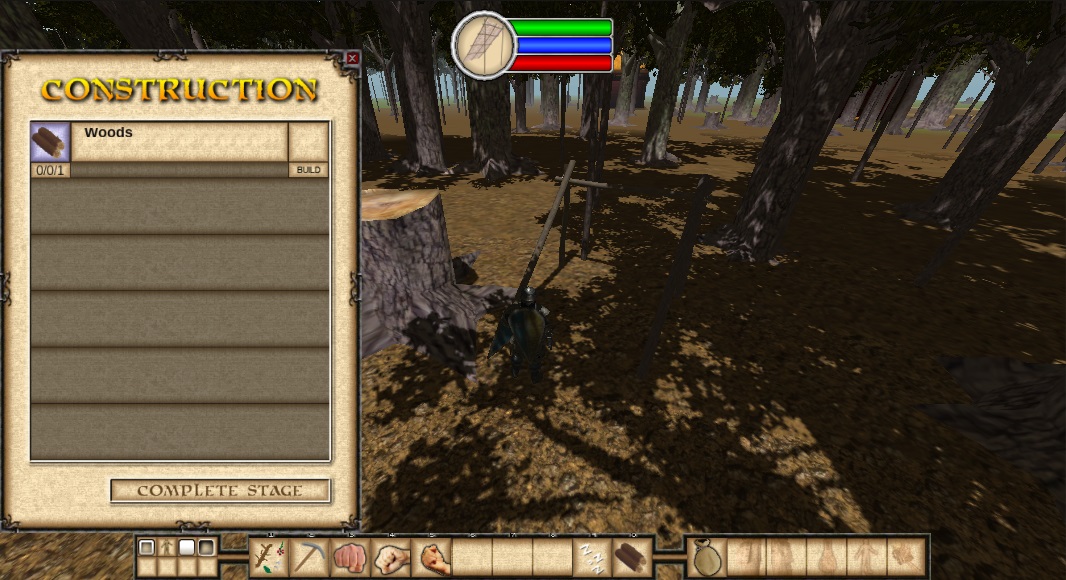 Finally a nice completed shelter :thumbsup: This will be a nice place to call home, a place to store items where they will not be exposed to the elements, and will provide you a big boost to your increase in rest level when you are inside of it. 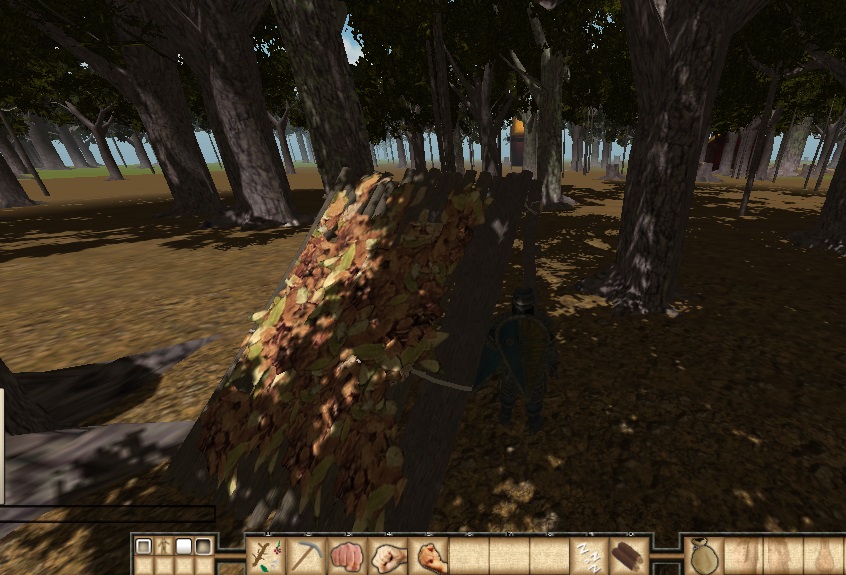 But if you don't bother doing any maintenance on a lean-to in a few days it begins to spring some leaks. 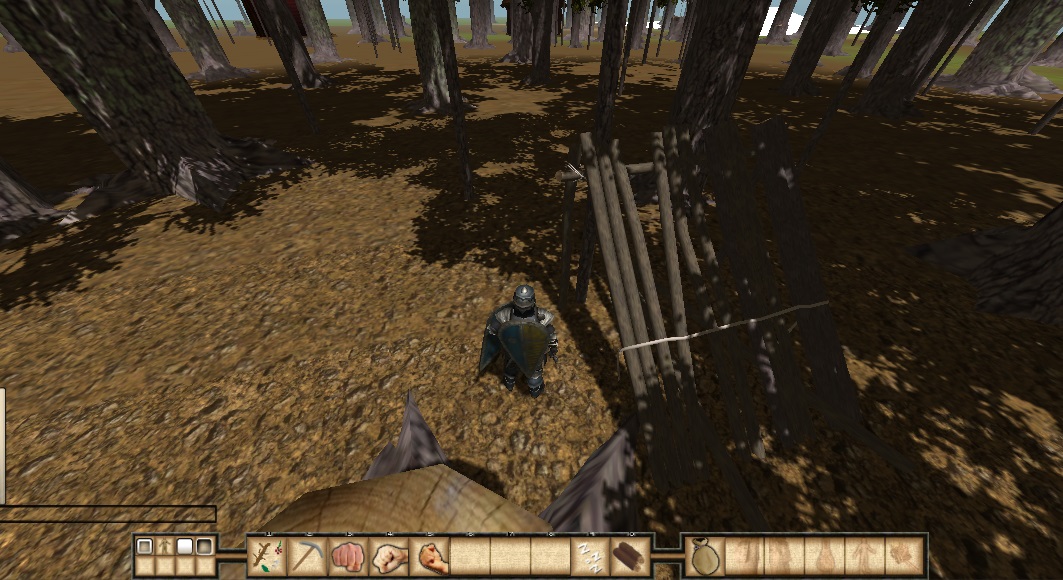 A few more days and this building would be very badly damaged and would require quite a bit more to repair.

I hope everyone enjoyed this look into some of the dymanic elements of our game world. If you have questions or wanted to hear about something else more in-depth, please let us know!

We want to take the best sandbox aspects of games such as this and combine some new gameplay elements (unique NPC system, task/mission system, deep factions management system etc...) to make an even more intriguing fantasy survival sandbox game.

looks good for me