In-game command reference and a complete manual. Both fully animated, of course ;)

Context help, already available for item and robot stats as described in an older post, is great for getting a bit of useful information on the fly. Unfortunately by it's very purpose the distributed approach is limited to concise at-a-glance explanations that won't bog the player down with excessive immersion-breaking text while in the middle of playing.

This is where it's handy to have a centralized repository of more in-depth information: a.k.a. a manual.

As a young kid I always loved reading game manuals, especially as a way to be "in the game" when circumstances demanded otherwise--the first such opportunity being in the car on the way home from buying said game ;)

Manuals could be full of both thematic text and useful information (in the early years including even meta-essentials like password references and how to configure MS-DOS to run the game!), but these days they're unimpressive and generally exist only in abridged digital form, read by few and helpful for fewer.

To satisfy the general impatience of the latest generation of young gamers integrated tutorials find their way into a majority of game introductions, with one casualty of the transition being the loss of the now-redundant separate and complete manual.

It's nice that die-hard fans are capable of producing and disseminating "real" manuals via wikis and walkthroughs, but quality can be all over the place. Rather than waiting for these resources to appear on their own, it's great if developers themselves put forth the effort to create a well-written breakdown of a game's interface and mechanics and provide it along with the game they hope all types of players will be able to fully enjoy. This includes the types of players who want all those juicy mechanics details in one place. Developer's are, after all, in the best position to write the manual since they know the game inside out.

Ranty aside aside, like some other roguelikes Cogmind is going to both include a text manual and make that manual accessible from within the game itself. I mean hey, it's a good excuse to animate more text, right?

While the new manual has yet to be written, it will be a much-expanded rewrite of the 7DRL manual seen here: 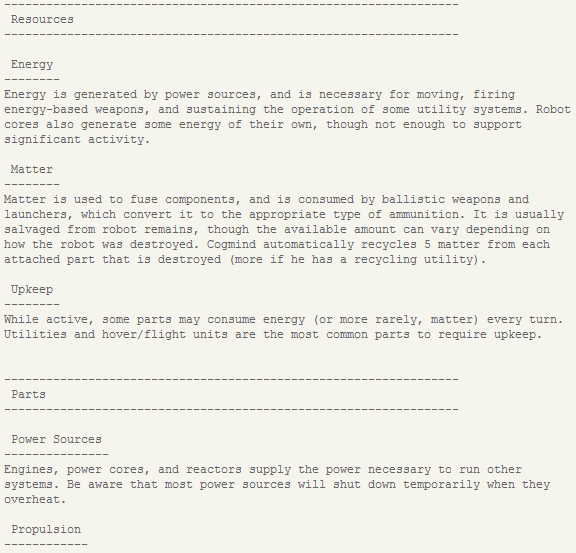 The original prototype manual was pretty complete as far as mechanics were concerned, and eventually tripled in length at the request of players.

This same file is now also parsed by the game and automatically divided into topics and subtopics for easy browsing!

The content here is just to test the system--it all needs to be re-organized and re-written given all the changes and additions to the game since the prototype! (click for full size)

While Cogmind can be pretty simple for beginners--no manual reading is necessary and you can drag-drop some robot parts to attach them and be off on your merry way to blow away robots--anyone who wants to get into the details can look up topics in the manual to answer questions where the context help may not be applicable.

F1 (or '?') is more than just the "manual key." An even more important and basic type of help needed for in any game (most especially complex games like roguelikes) is a centralized reference for input commands. Opening the help interface actually doesn't go straight to the manual, instead bringing up the command list.

This game... uses every key possible, doesn't it... (The gif doesn't capture the animation very well, but you get the idea--click for full size.)

Because we don't want to scare the hell out of people on the fence about playing a game like Cogmind, the above is not what you normally see when first accessing F1 help. While most players likely to pick up this kind of game in the first place probably won't be too put off, by default F1 opens the "basic" command summary which looks a lot more friendly and focuses on how the mouse can be used for everything: 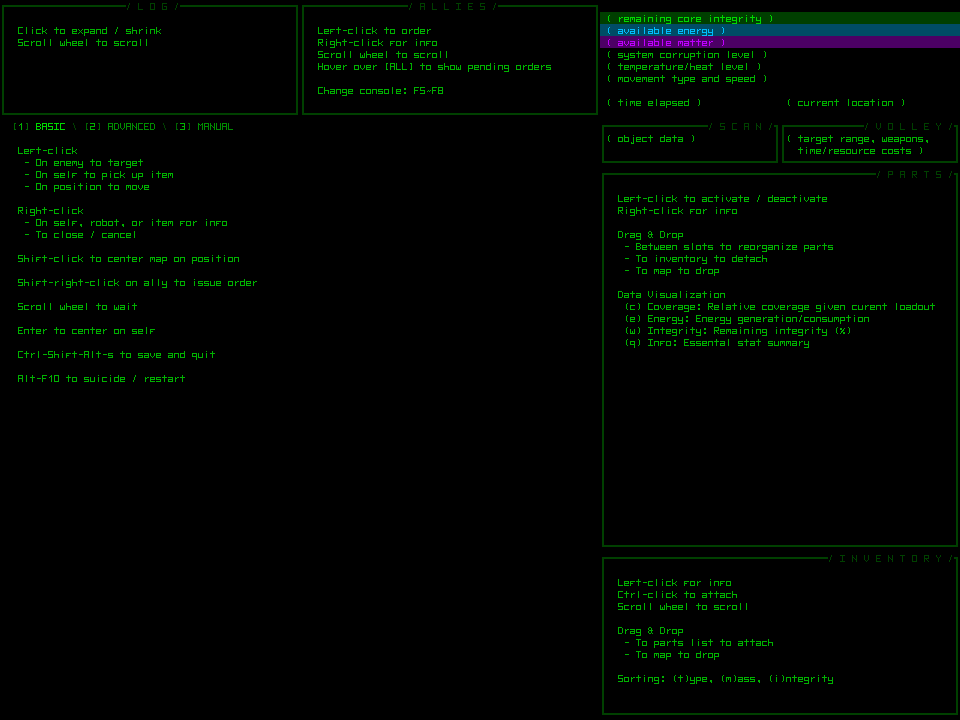 A bit bland, but not so scary, anymore. (click for full size)

Buttons in the top-left part of the main window can be used to switch between basic/advanced commands and the manual described above. Whenever F1 is re-opened, it defaults to whichever mode (basic/advanced) you last viewed, and even remembers the setting between games, making it quicker for advanced players to find what they're looking for.

F1 help still lacks a more general introduction of the function(s) behind each part of the interface--except what I've managed to squeeze in for the upper right area of the HUD, but I'm waiting until later to see how necessary that will be for new players. (That and some kind of integrated tutorial.)

As for the full command set, it really does use the entire keyboard if you want to completely avoid the mouse. It's still pretty easy to catch on since letters are part-related and numbers are inventory-related, along with a few other basic patterns (like ctrl- to attach and use--"towards use" concept--and alt- to detach and drop--"towards disuse" concept). There is really only a small set of unique actions required to play the game, while a majority of the extra commands are enable ways to enhance the experience or access less frequent functions.

One thing players will quickly notice is that wherever possible there is more than one way to do the same thing. This applies to both entire systems (see the previous post about ally orders) and common commands like movement or scrolling. Movement is possible via mouse, keypad, arrows, or vi-keys. Waiting a turn can be done via '.', keypad 5, or even by turning the mouse wheel over the map area. One principle I like to adhere to in designing input schemes is to provide as many logical duplicate solutions as possible to satisfy different user needs/preferences. It's easy to enable additional input methods, and while this can't completely replace the need for remappable keys, the latter solution requires extra work by the player. That's not to say there isn't a place for remapping, since covering everyone's needs is impossible, but right now I'm not sure how well the game's reliance on the A~Z alphabet will translate to remapping functionality in all cases (I use a non-English OS myself, but together with a U.S. keyboard). No sense in implementing a solution without first identifying the types of problem cases it needs to handle.