First experimentations on the Micro Mechanics in the arena.

We've made the first experimentations of the micro mechanics for BlackMonday. We started with Bomb mechanics, where we tried different variations of Bombs.

Starting with the usuall timed bomb, which explods after 1-2 seconds is pretty standard like a stone and wasn't too much fun. Next we implemented the trigger bombs, a player can shoot them and later on detonate all of them at once. THAT was fun! Lying out your traps, wait for the right time when you opponent come in range and then blow everything up. But there the problem was that it takes time to create enough bombs to actually create a trap.

I remembered the good old game golden eye on the N64, where the personal mines where quite funny. A mine which explods we you come close to it. Okay, so we've made the trap bomb. Once any Player comes into the range it explods in half a second. And at last we've made a basic bomb which explods once it hits the ground, but that feels more like a shot that flys in a arc and does damage within a range...
That was interessting enough, but the problem was that having some bomb on the ground which don't do anything was a bit boring. The player easily avoided them and the turn to be useless.

The next step was adding some other mechanics not all being bombs, at least one should also give the players heal back: the Healstation. And we wanted the players to be able to dodge an incoming bomb.

Here is a footage which shows these mechanics:

Another mechanics we added was the suitcase bomb, which fits nice into the setting. The setting you can't see yet in the game :)

But we do have a concept art: 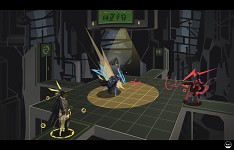 It is a combination of the timed bomb and the trigger bomb, so a player can either shoot it and leave it, it will explod in about two seconds. Or it can be triggerd earlier. Another nice mechanics is to push a usuall bomb away with the suitcase to increase the range of it.