Emerge is an experimental open-world concept developed over the last two weeks. Many ideas sound good on paper; rather than commit to a single gameplay direction, this project focuses on allowing the mechanics to explore less obvious ideas without restricting the development with a static end-goal.

An aptly named game. I have a concrete idea in mind, but I am ultimately taking a mechanistic approach to game development. Here's a look at what I've come up with in the last two weeks:

With my last two projects, Hold The Line and Greeks Vs Orcs, I targeted a single gameplay objective and based every decision around that. For Hold The Line, it was a squad-based, multiplayer battle simulator with a typical match based domination between two teams. In Greeks Vs Orcs, players are faced with a general survival, where victory really falls to the player to decide when they were done.

Both games provided some novel twist on existing genres. However, with the tsunami of games unleashed by the growing market, what generated interest for my games and mods 8 years ago is no longer sufficient. Especially with the rise of pre-made assets, I've seen many games generate a great deal of interest using mostly purchased components. Therefore, somewhere there exists a failure in my process.

As I see it, indie developers are like the contemporary dungeon masters of the nerdy gamer world. If people don't want to play in my dungeon, that is my fault. 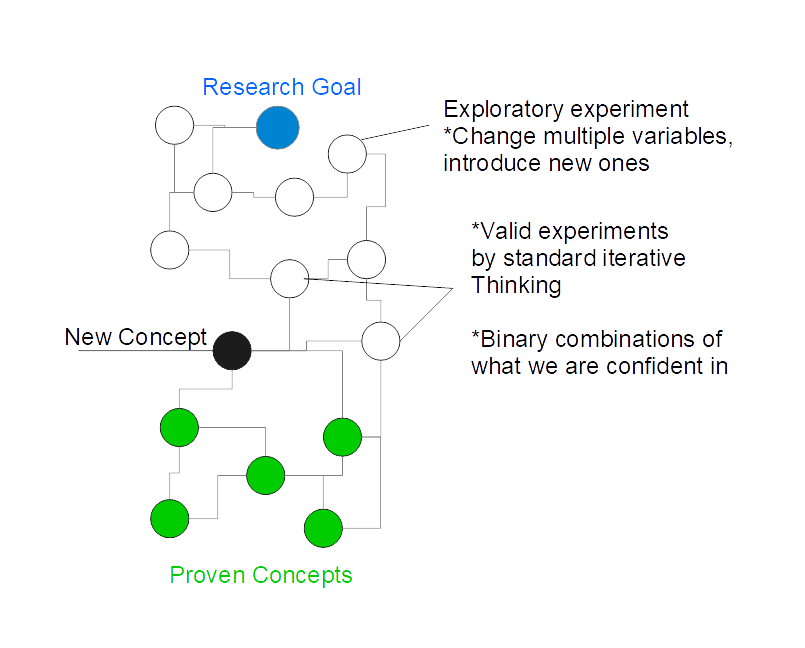 Based on this, I'm changing up my approach. My scientific research approach has a proven record of out pacing my colleagues. My new process is an attempt to apply this model to game development. Rather than focus all efforts on a single gameplay path, I am going to use short term goals to direct my final destinations. Similarly, I use exploratory experiments in research where there is no direct comparison with my own or published data. Our minds are highly adaptive; feeding a wide variety of seemingly heterogeneous data can begin to elucidate a deeper and more complete picture (see Figure 1). Any idea seems complex if we are unaware of the fundamental ideas that it is comprised of. If you think of anything you've learned, it may have essentially appeared to be magic. Once you figure out how something works, it becomes quite trivial.

With each game mechanic I develop, there is a clear idea as to what it provides in terms of gameplay. If it turns out to be fun, it stays. As long as it is not disruptive to the overall software architecture, it still stays as it may yet serve a purpose I am unaware of in the moment. Should the idea present an unexpected shift in the overall objectives, all the better! After all many hit games started out in an entirely different objective. Even Minecraft could have become some 'meh' RTS. If Notch limited himself to his original intent, I never would have been able to build those sweet castles (I also made underwater roman villas, highly suggested). Of course, once you ask for money, you should really keep your promises. Hence my multiple greenlights and no releases.

As an example of an unanticipated mechanic, I added hand-to-hand combat yesterday. One feature of that, kicking people and flinging them backward proved to be oddly satisfying. In fact, I probably spent 5-10 minutes bludgeoning the citizens of my new world. While this may not be profoundly innovative or provide a new game objective, it remains a source of inspiration which may have some effect on my direction.

More information and content is on the way, stay tuned!

Little side note: "generating interest" does not equal "interesting game". Majority (if not all) of those projects relying entirely on pre-made content may generate interest (it's called hype, which is bad concept to rely on) in the content (which is bought) but vanishes soon after because what counts (actual game mechanics and all that really makes a good game)... is simply lacking.

So no, don't go around and trying to "get closer to the attention whores" since in the end it's going nowhere. If the concept is good interest will come (usually only after release, the time of pre-release interest in good concepts is unfortunately over).

I agree with your point. By no means do I advocate reducing the quality of output or thought put into a game; at the same time, user feedback is an important tool to indie developers.
Ideas are cheap and pre-made assets let some feign good execution for a time. In the end, those with the technical skill, passion and good organization will provide gamers with a substantial product. At the same time, I thinks it may be important to try to swim above the waves of garbage.