Today I finished modeling and texturing the asteroids for Asteroid Miner. Here's a look at the first test, and the final result.

I spent the bulk of my time today trying to track down a bug in a project I am doing for a client, but I did manage to model and texture some Asteroids for Asteroid Miner. In total, there are six asteroids and four textures. The final game will randomize them so there is a nice variety of asteroids in play. The screens below are just the material test showing each of the six asteroids and the four textures. You can see that the differences between the textures are pretty subtle. I didn't want massive variation because I didn't think it realistic. 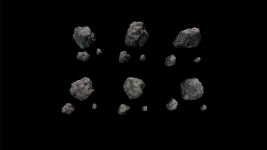 In this first image, you can see what the initial texture looked like. There's actually three layers to the texture. One for the base rock, another for the craters, and a third for the minerals. While it looked fine in GIMP, at the smaller scale that is used in the game, I wasn't happy with how the craters blended in with the rock to be almost invisible. I also thought that the minerals were too small to be readily identifiable as the asteroids move by. The colors don't really have any bearing on the game other than for variety, but I still thought it would be nice to see them clearly when you are playing. 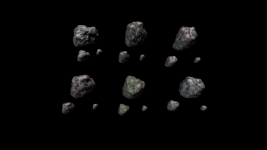 That leads us to the final render. I increased the size of the craters and the minerals to make them more visible and also darkened the craters a bit so that they stand out even more as distinct materials from the base rock. You'll also notice that the asteroids changed shapes. I went back into Blender and re-exported them at a lower polygon count because the first models were overkill on the polys. I had changed the settings on the displacement map for each of the asteroids when I first exported them. But didn't bother doing that the second time around. There's enough variety between them without the need to do that. 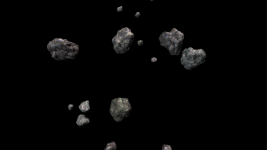 Here in the final image, you can see a preliminary asteroid field. There isn't a whole lot of code in place controlling it just yet. For now, they just warp from one end of the screen to the other when they leave the viewport. The asteroids themselves are just the ones from the material test scene.

In the coming days, I'll write the code to spawn a wave of random asteroids so a more finalized view of what they'll look like can be presented. Of course, at some point there will be a star field in the background. There will also be several "arenas" for playing in. This will serve the dual purpose of the player not having to stare at the same thing all the time, and allowing me to create realistic sources of bounced light in the form of planets or other celestial bodies. Presumably there's a sun off screen somewhere, but there are two lights to break up some of the shadow, and it would be nice if the source of that second light was visible.