In Etherium, you are introduced in a situation where everybody is fighting over one single resource and the few planets that contain rich deposits of Etherium. Here you play through a single player campaign or with a couple of friends in a multiplayer experience. 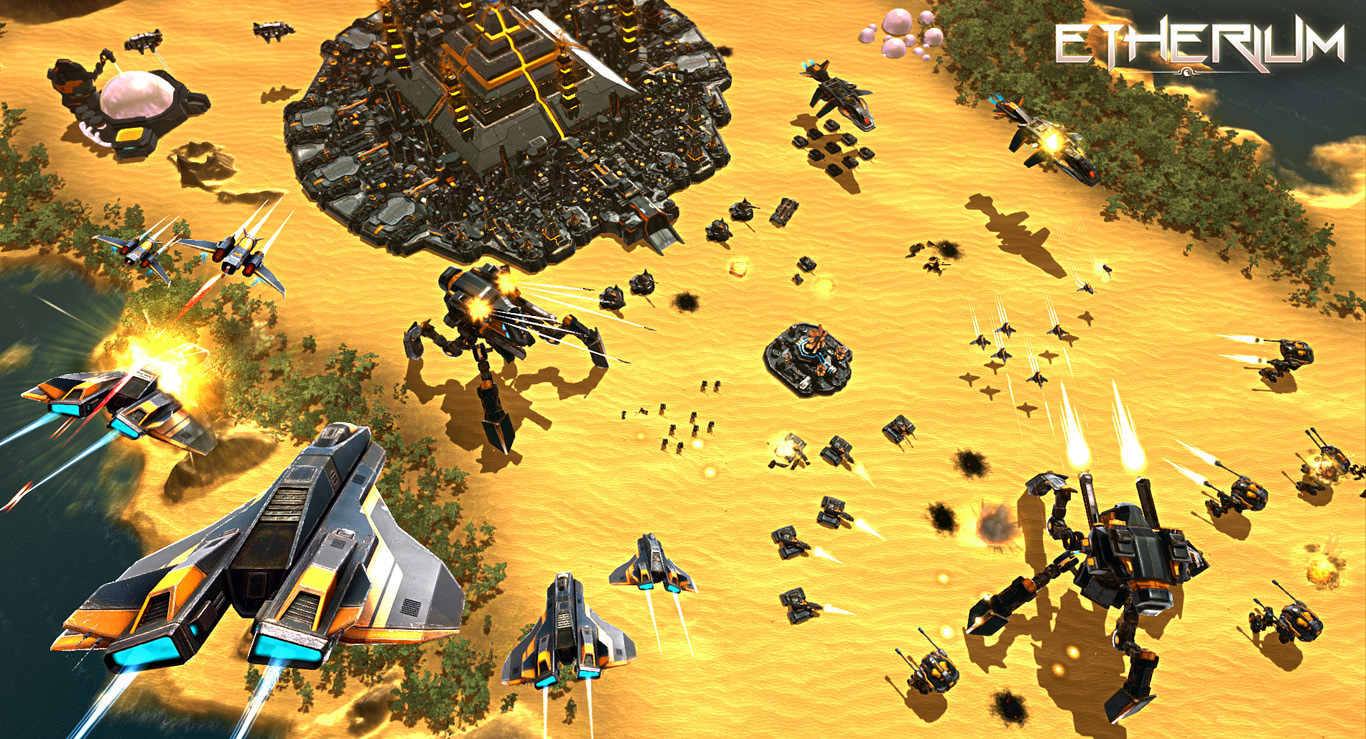 In Etherium there are 3 known factions, fighting to control the most valued resource known in the universe: Etherium and they struggle, fight, colonize and do everything in their power to control as much of it as possible. 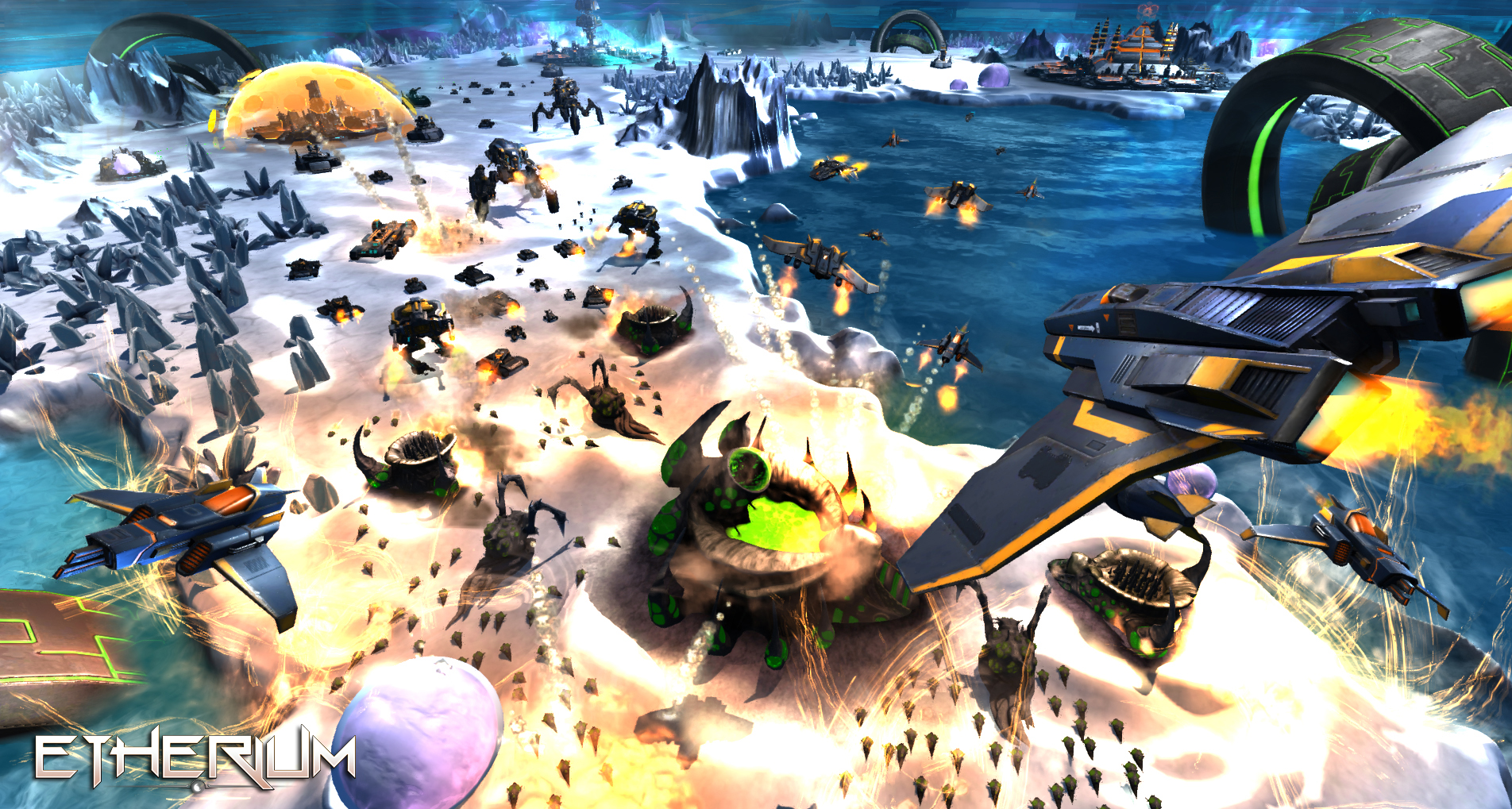 In the solo campaign, actually 3 campaigns (one for each faction), you take control over one faction. you are totally free to decide your every strategic move with the simple goal to eliminate your two other opponents. Every decision you make has its own consequences, sometimes your opponents will recapture what you took and other times it’s you who can go on the offensive side. When fighting battles and conquering planets you can evolve your tech tree for new or better structures and units. All of these options grant you a lot of variety while playing the game. 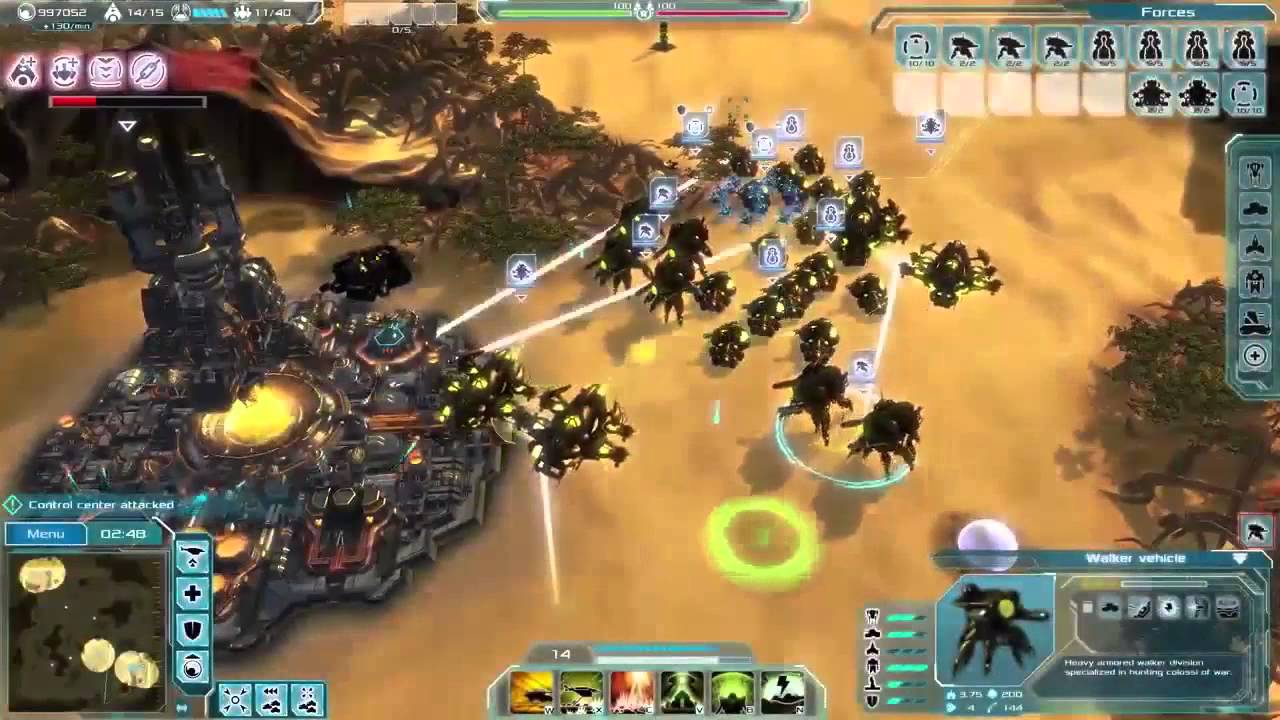 Adapting to every aspect is key when playing Etherium, every faction has its pros and cons and every planet or moon you fight for has another terrain so no fighting experience is the same, this combat and leveling system offers a fresh breeze every time you play a new game. 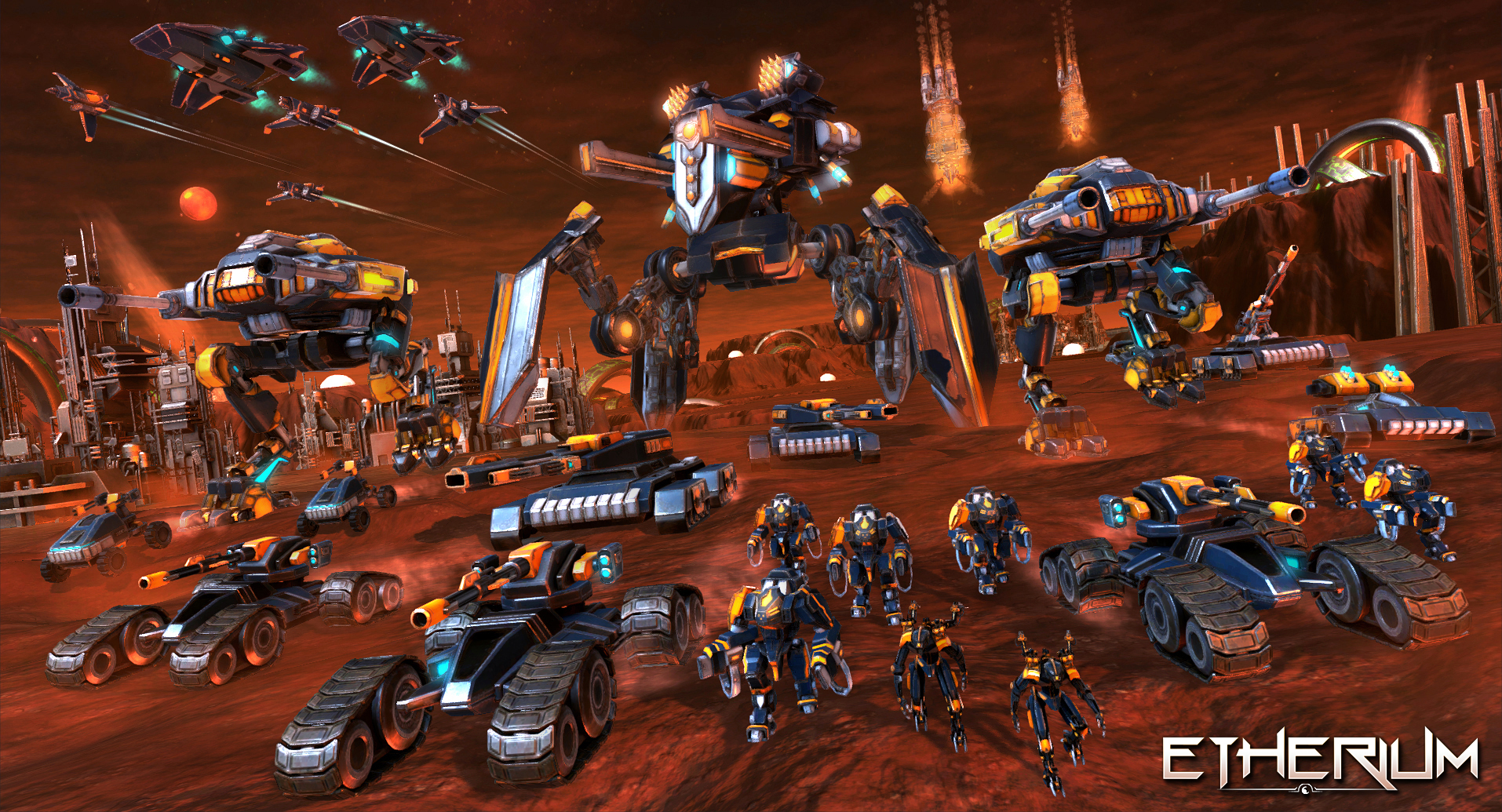 Etherium features absolutely gorgeous aesthetic design and art direction. The maps and factions are full of vibrant and diverse colors, and the unit/structure design is great. The graphics are everything you expect about a RTS game so no disappointment there. Etherium is however more demanding for your computer as it looks but any modern day pc can run this game without any hesitation. The maps, visual effects, units and overall look of the game are good and well worked out and there are no real visual bugs to be found. 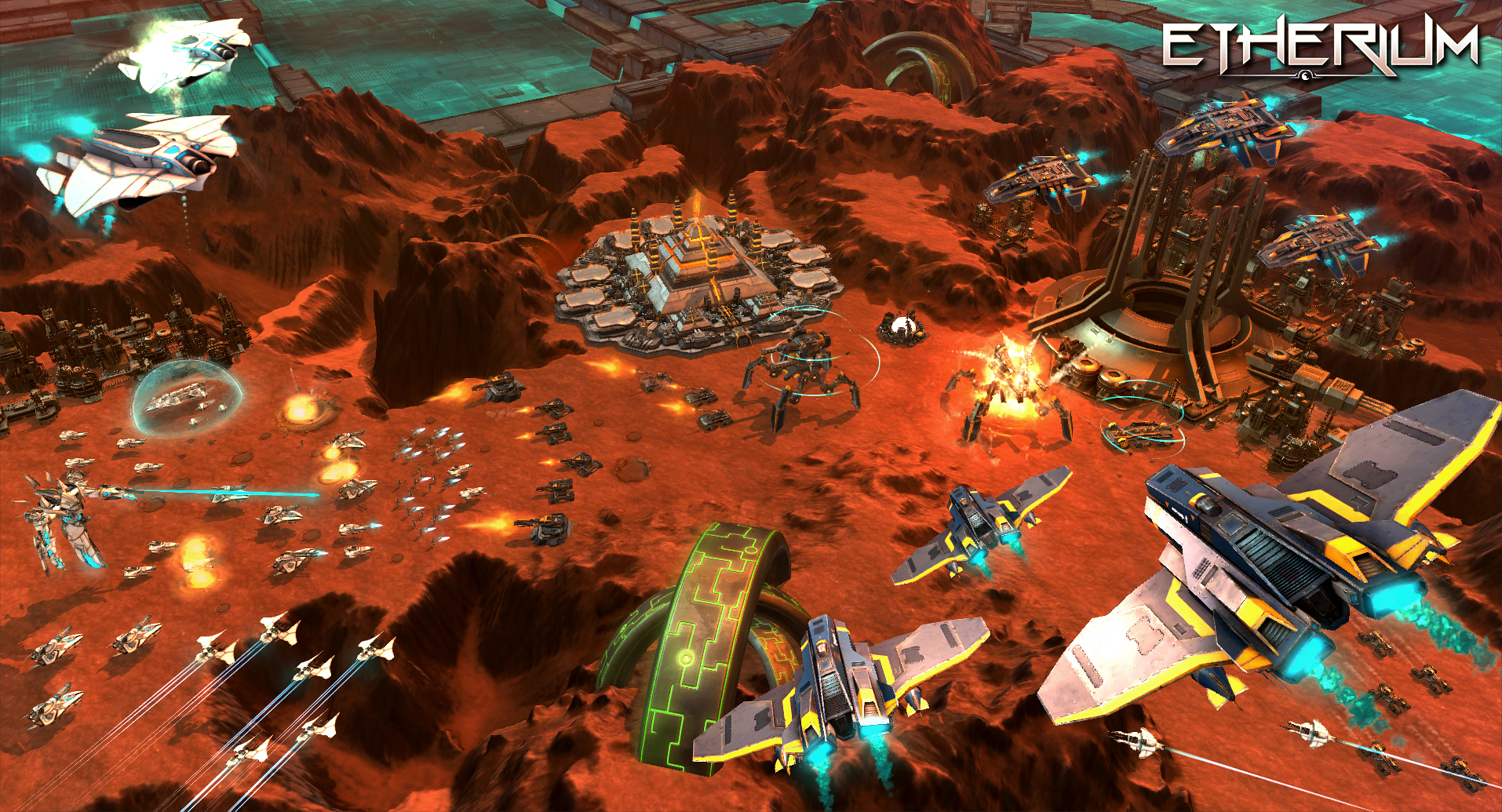 In this real time strategy game, your main concern is establishing a production and creating a supply of Etherium, the main resource in the game. This can be done by simply annexing a the pieces of territory where a deposit of this goodie is found and then starting to extract it. This Etherium can be used for basically everything in the game: tech upgrades, buildings, troops,… So conquering those domains is the key to success.

Everybody knows strategy wins a game but it doesn’t always win you a battle due to the climatic events, the weather control system in the game has a direct impact on everything in game and can just as much assist you in your quest for victory as much as it can cause you to lose troops. A frozen river allows you to drive your tanks over and flank the enemy while a sandstorm limits your line of sight. 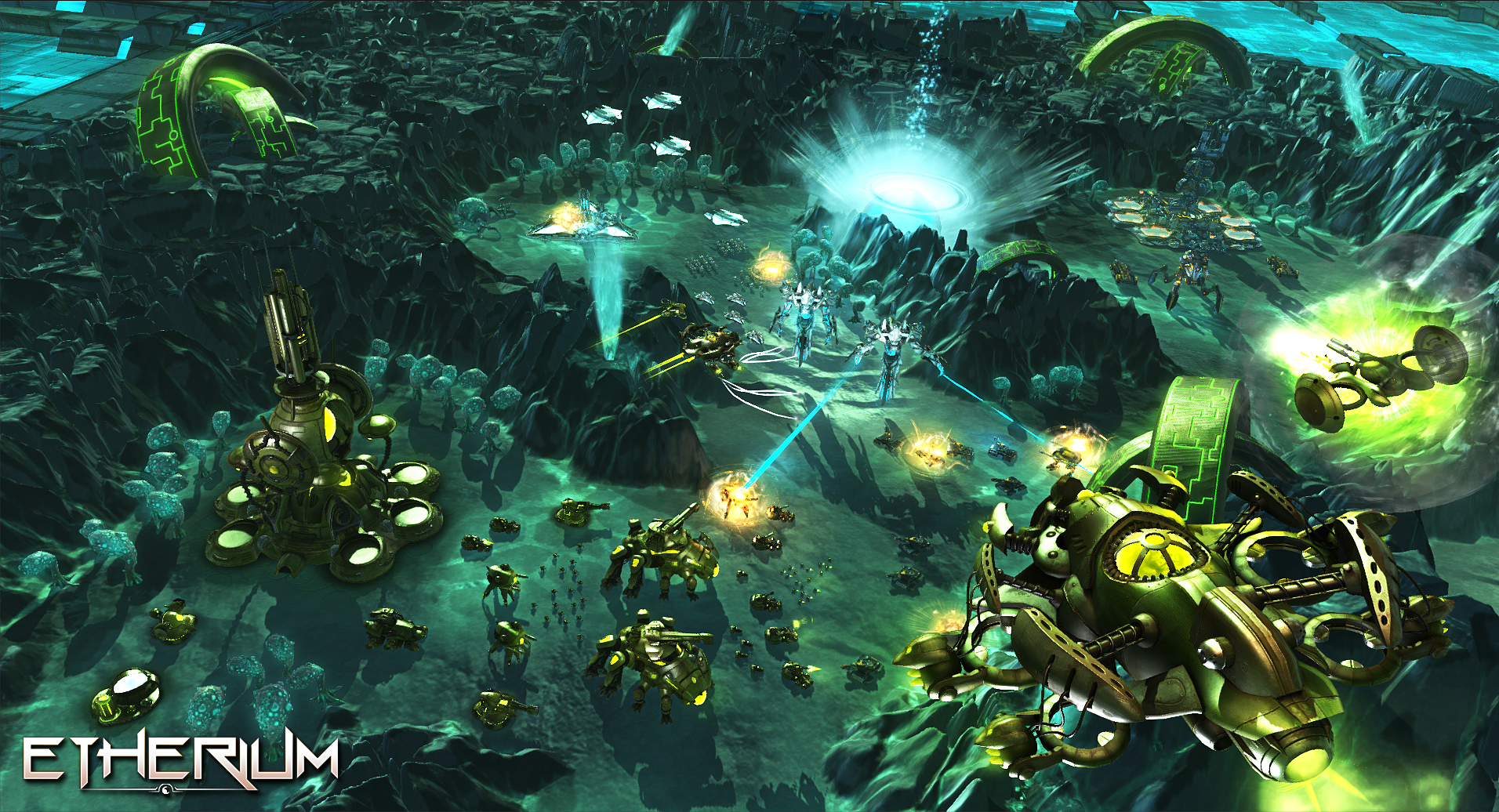 There are 3 factions you can play with and each faction has its background and strengths and weaknesses. First of all you have The Consortium: a Capitalist corporate empire who specializes in espionage, sabotage and assassinations. Secondly you have the Awakened of Intar, an order of warriors who live and die with the sole purpose of conquering all the Etherium possible. And the last factions are The Vectides, a technologically advanced species who are doubted if they are a living organism at all. Those 3 offer a unique playstyle so choosing a faction that fits your game is one of the most important aspects of the game. -- Gameplay video link i posted in comments section --