Today we are showing off the Hotchkiss light tank, one of the workhorses of both the French Infantry and Cavalry in 1940.

Today we are showing off renders of a tank that you might have seen the turret of before: the Hotchkiss Mle 35 M39, more commonly known as the H39. 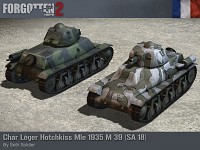 In 1926, the French Army identified a need for a cheap light tank capable of supporting the infantry in the attack. This was supposed to be filled by the D1, but that vehicle was neither light or cheap. In 1933, the manufacturer Hotchkiss approached the Army with an idea for a tank to fill this requirement that would take advantage of advances in armour casting. A set of formal requirements were issued to Hotchkiss, and also to other manufactures. Hotchkiss returned to the Army with its first prototype in March 1935, not only finding that they had been beaten by Renault but also meeting with rejection as the requirements for armour had increased from 30 to 40mm.

By August Hotchkiss had managed to submit a revised design and this was adopted as the H35 with 200 ordered. However the first vehicles delivered in 1936 showed poor manoeuvrability in cross country driving and the Infantry rejected them. Fortunately, the Cavalry were suffering from slow deliveries of their SOMUA S35 tanks, and became a useful if somewhat unwilling place to send the tanks. Having been designed for infantry support, the H35 had a rather slow speed of 28 kph, and the need for a better engine was seen rather quickly. 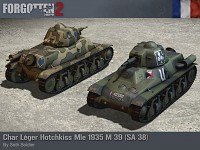 First prototyped in 1937, the main change in what would become the H35 modifié 39 was a new 120hp engine. This increased the speed to 36.5 kph, but required a redesign to the engine deck. Production switched over from the older design with chassis number 401. At the same time, the shortcomings of the venerable 37mm SA18 gun were recognised. Originally designed for the FT, it was completely inadequate as an anti-tank gun. Its replacement was to be the high velocity 37mm SA38, though production of this new weapon never quite managed to meet the demand to retrofit existing vehicles.

The H39 served widely in both Infantry and Cavalry units in France during May and June 1940. The armour protection was very good but the single man turret and lack of radios left the type vulnerable to the more tactically aware Panzer divisions. Many would be captured by the Germans and used both as is and in a multitude of modified roles for the rest of the war. Our H39 was made by Seth Soldier.