Our environment artists have been cranking out both map specific and generic props. We wanted to post some images of these assets, and discuss a bit of the process involved. What's shown here is only a handful of what's been done for the game so far.

Finally there are the props which are generic enough to be able to be used on any map and in any art set. For example, pipes, railings, lights, crates, etc. 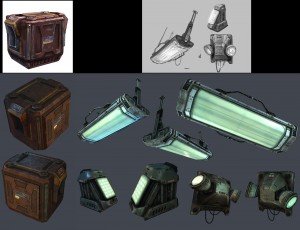 
With a few exceptions, the majority of props are based off of some form of concept art. Ideally a detailed color painting, like the crate image concept above, is provided to the environment artist. However, due to time constraints, detailed black and white sketches are often created instead, and sometimes less detailed and messier sketches, such as the ones below, created for a set of generic Refinery wall machine props. 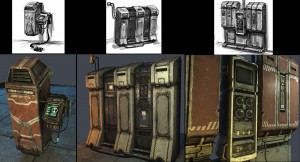 
Having environment artists who have the ability to adapt to the art style, can accurately interpret details shown in a rough sketch, and are able and willing to come up with their own appropriate details to fill in any blanks, can save an immense amount of time for the concept artist. As you can see from the above generic wall props, the environment artist really managed to bring the simple sketches to life, staying true to the shapes, look, and feel, while at the same time adding a tremendous amount of extra detail for visual interest and to help give the models a sense of scale.

Sometimes the props are pulled from a more finished color painting of an entire room or area, like these robotic arms for the tram repair room in one of the refinery maps. 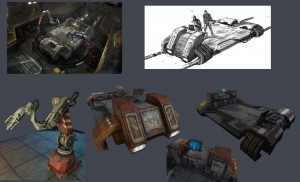 
The tram itself was modeled from a quick sketch that Frankensteined elements from several earlier tram/ rail cars concepts into a new version that would fit in better with the look of the map.

Sometimes props are created from a combination of concept art as well as photo references of real world objects. In the case of these modular refinery buildings which can be seen outside the windows on one of the maps, the art director provided a large amount of photo references of existing factories, refineries, and oil rig platforms, along with some concept images, and described the look he wanted to achieve 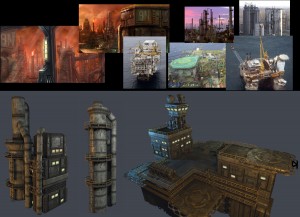 
The environment artists are often asked to interpret and create a detailed model out of a few messy brushstrokes. In this example you can see the process of creating a wall mounted machine/computer prop that is just one part of a large room in one of the refinery maps. 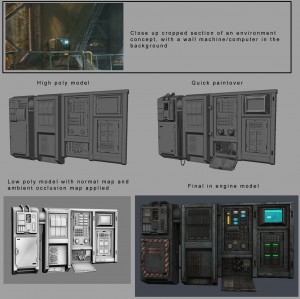 
The environment artist interpreted the low detail image and created a high poly model. The art director provided feedback by doing a quick paintover on top of a screengrab, then, after the changes had been made, a low poly version of the prop was created. The normal map and ambient occlusion map were baked out from the high poly and mapped to the low poly, and the diffuse, spec, and illumination maps were created, resulting in the final in game prop.

The process is not perfect by any means, and for a larger company with teams of concept artists, it's often preferable to generate detailed color concepts, with orthographic views, for most props, before they go on to the modeling/texturing stage. However, with the talented environment artists we have on our team, and proper feedback and communication with the art director/concept artist, we feel that we've been able to achieve high quality results that will add a lot of detail and life to maps in Natural Selection 2.

We hope you enjoyed this overview on environment prop creation.
Comment on this article

Awesome props. Love the amount of work and detail you guys put into this.

These are bloody awesome guys!
I can easily see these props making maps feel like it's a Natural Selection game.

woohoo! I'm always amazed at the quality of modeling you guys put out. It puts my feeble attempts to shame.

Individually, they're just cool futuristic versions of normal everyday things(Excluding robotic arms). But altogether they give a nice description of what the mise en scene will be like.

Not that bad. It has that photo-realistic quality that Source games have, and I like it. It may be your own Engine now, but I still get a Source vibe from those screenshots.

You do? Source? I would say Unreal 3..
Doesn't really matter though, they look great anyway.

Ssh, that's bad luck man. Look at UT3 now, no game wants to be compared to that. :P

Very interesting, thanks.
You have some really talented people on board.

really nice models you have there ;) the texturing is superb.