We're now knee deep into designing and constructing the next world region in Foxhole. This new map will be called Endless Shore and will feature lots of water, bridges, and river towns. This region will be located directly east of the Deadlands. Thematically, Endless Shore features the remnants of fishing villages and sea ports from the old Warden Empire. In terms of gameplay, the map is highly asymmetrical, giving the Wardens closer access to an isolated island with two villages, and the Colonials access to three easily defensible mainland towns. We hope to have this new map ready in time for 0.0.22.

Here are some screenshots from a prototype version of the map. Below is the crossing from the eastern island to the north east town (and tentative Warden start location). 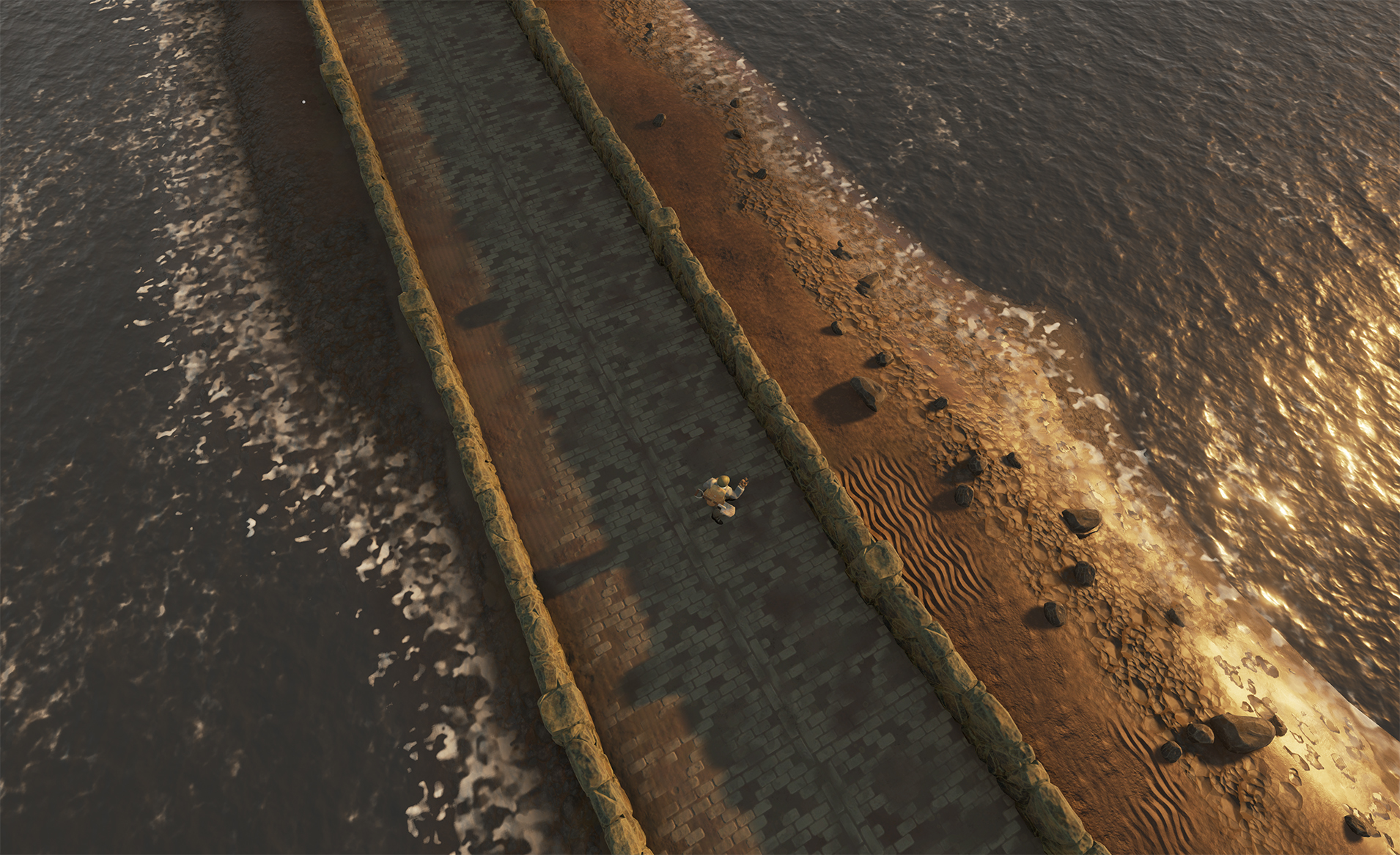 This is a new canal asset that we're using in the town that lies on the western side of the map. This will be the largest town the in the Endless Shore region. 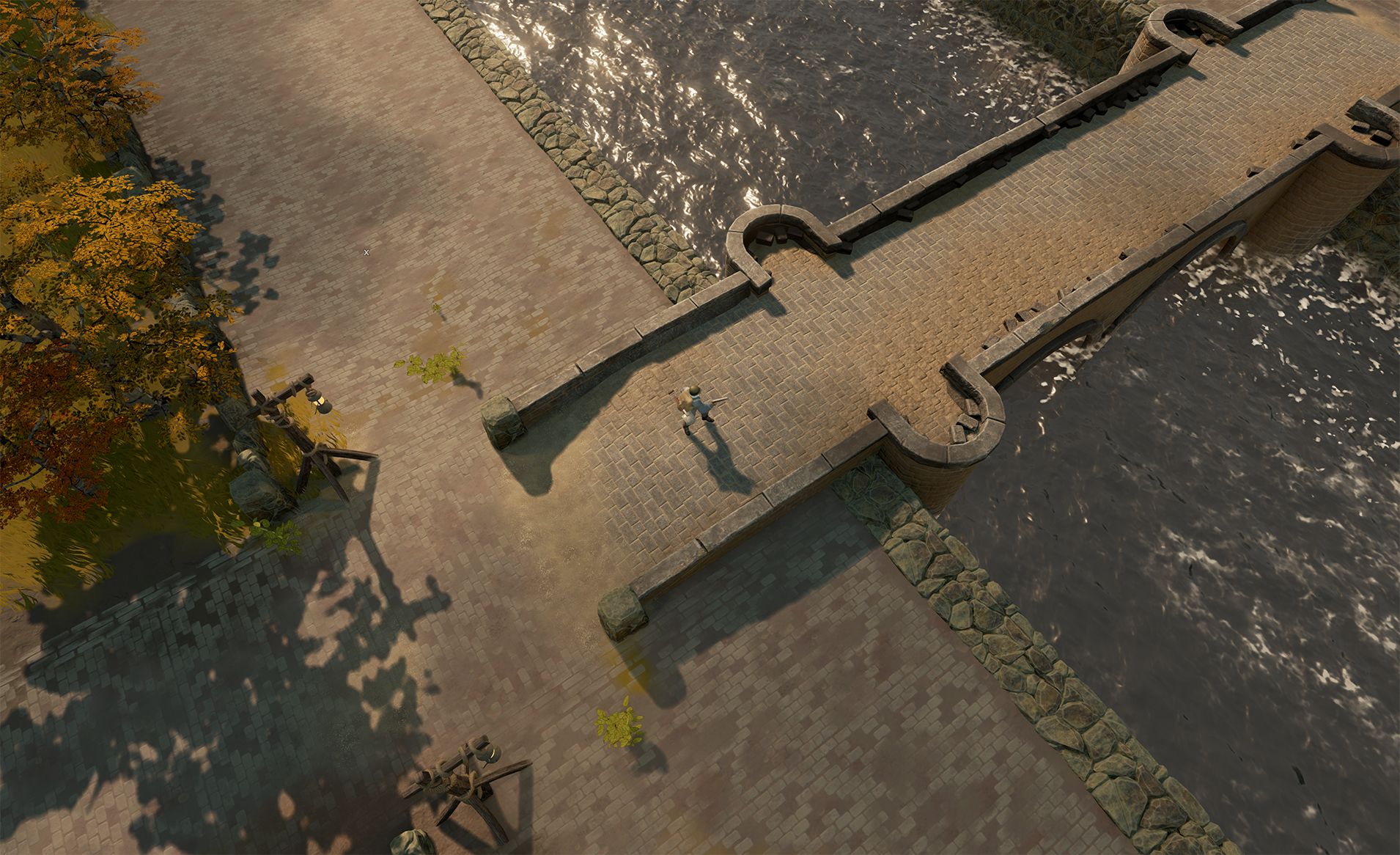 This table top mockup shows an early version of the Endless Shore layout. 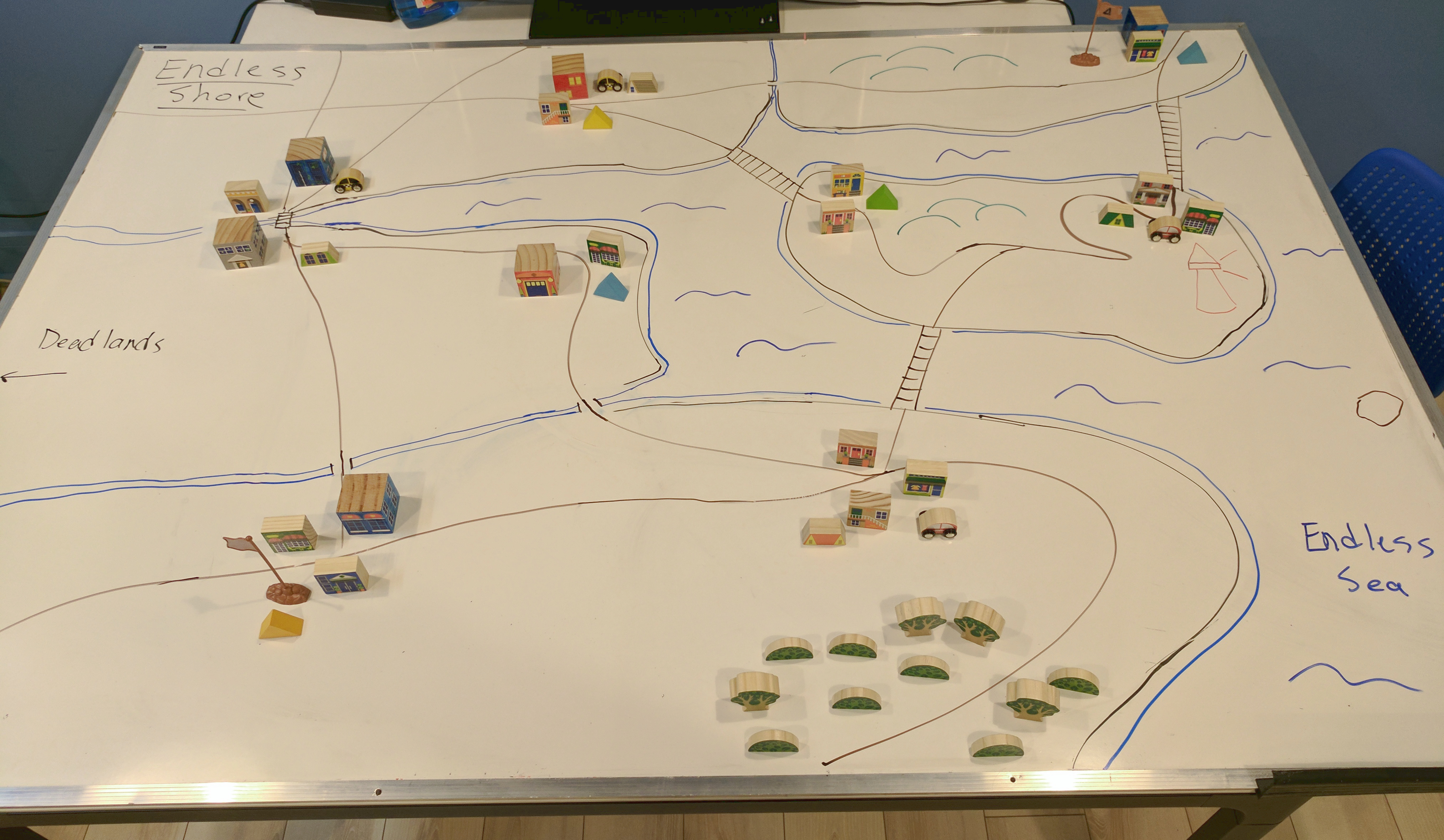 For the last few weeks, Julian (our concept artist) has spent much of his time working on mood environment paintings. Our goal was to flesh out how our world environment feels in every direction extending out from the Deadlands.

First, we have the harsh, snowy lands of Callahan's Passage. 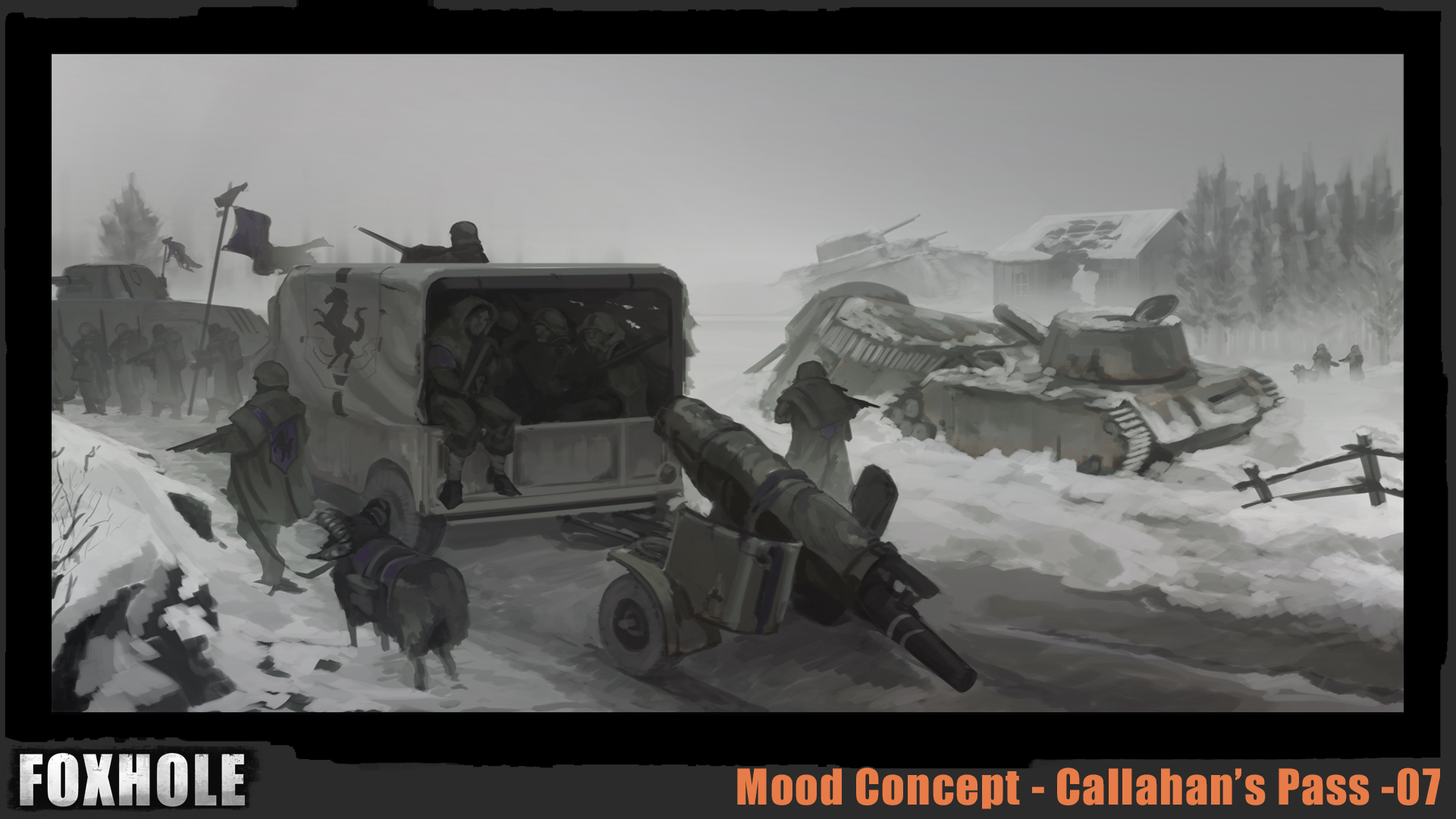 Next, we have the battle scarred landscapes of the Deadlands. We hope to one day revamp the Deadlands map to better reflect the current state of it's thematic design. 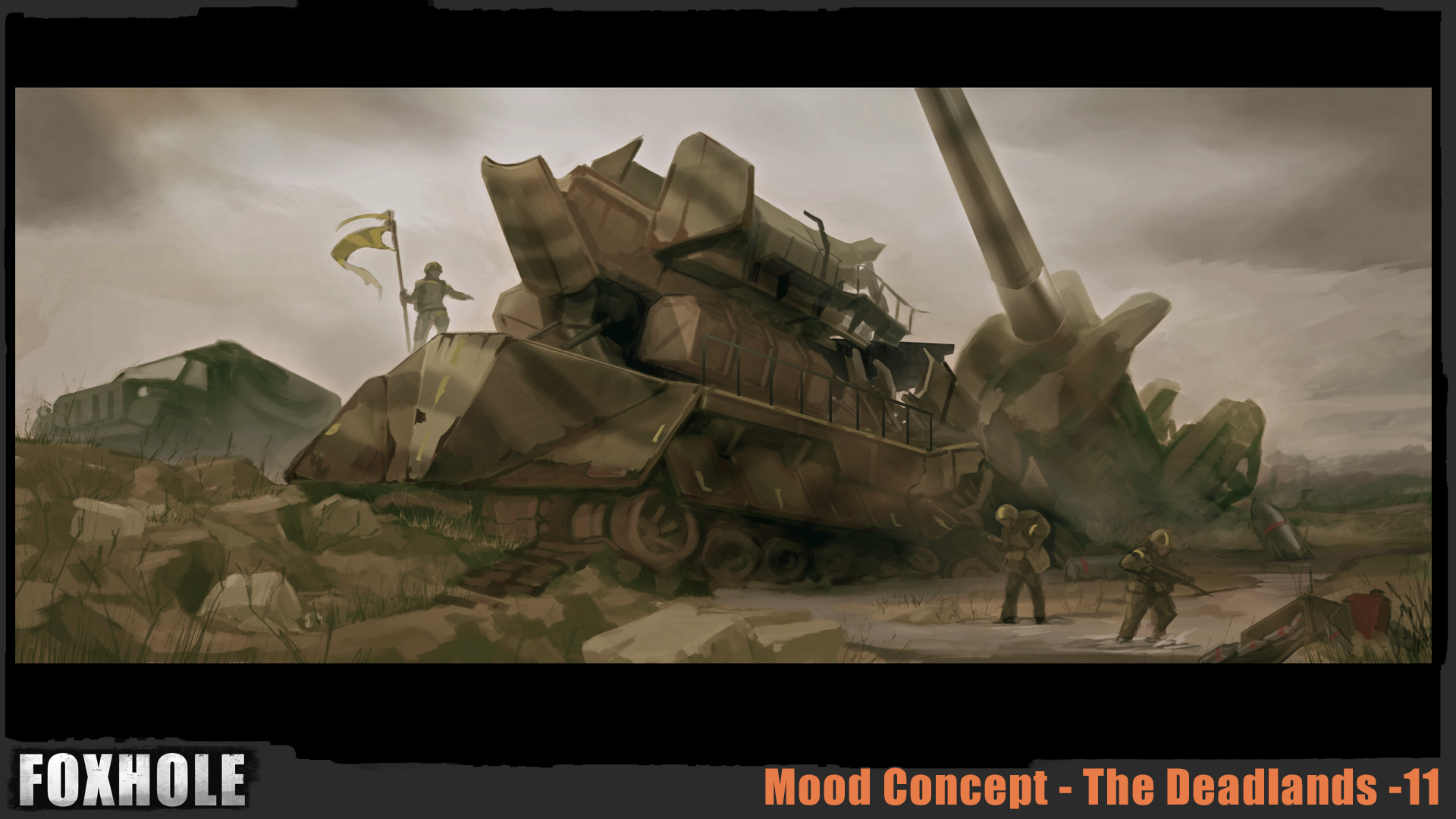 Finally, we have the relatively calm farmlands of the Upper Heartlands. I personally like this concept because it conveys how war is integrated into the everyday lives of those living in the world of Foxhole. 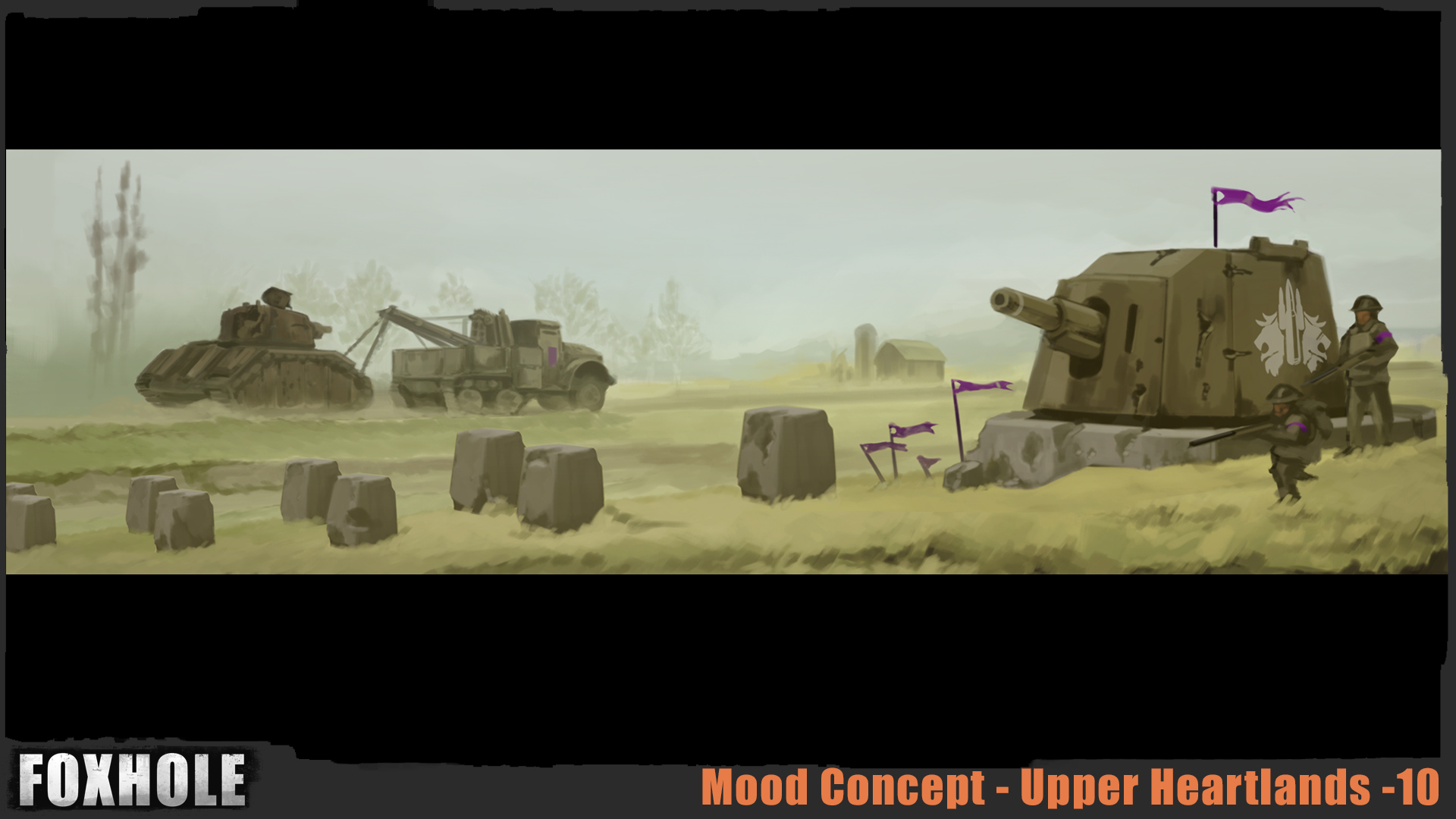 This concept shows the forest areas extending out from the west of The Spine. 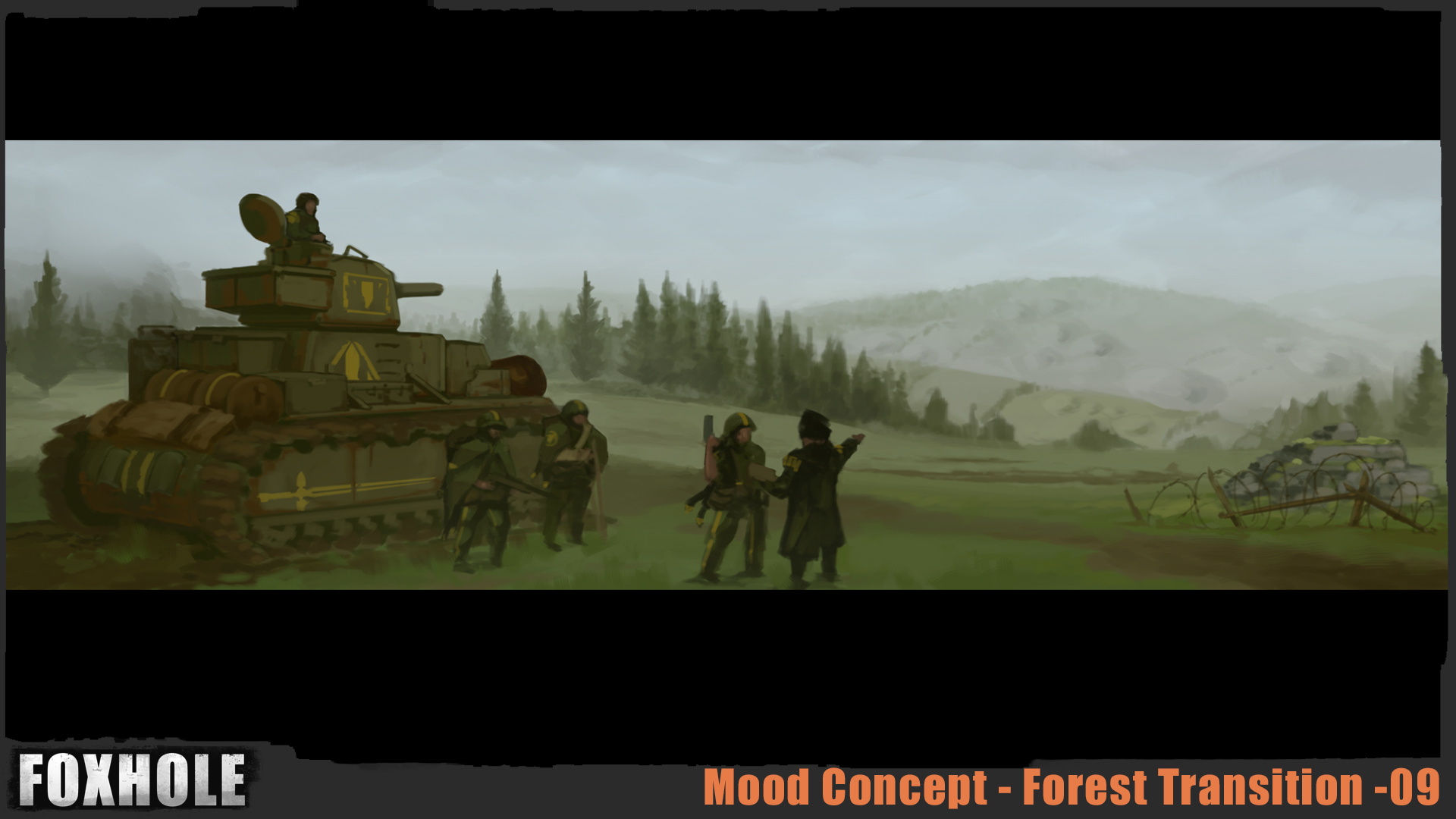 The Technology system is going to be seeing a major revamp in the future.

Right now, certain production structures like the vehicle factory have a Technology Level that is increased after a certain amount of Technology Parts have been submitted to it by players. Soon after we first tested this system, we were a little disappointed in how it was working out. Our primary goal with this feature was to add a sense of long term progression to the war, so that wars would evolve over time. We were also interested in seeing players work together in mass to progress the war.

While these goals were reached at the surface level, there were a lot of flaws to the design. For one, the system felt extremely grindy as players had to completely dedicate their time to finding Technology Parts in the world. We resolved this issue eventually by making parts obtainable through salvaging. The other major issue was that the system felt too flat and linear. There was really no decision making involved in the process. Structures just went from one level to the next.

To evolve the system to allow for more decision making, we will be replacing Technology Levels with a Technology Tree. When submitting Technology Parts to a structure, there will often be more than one choice of vehicle/weapon/etc to unlock. The act of submitting Parts effectively becomes a voting mechanism for what to unlock next. It's important to note that this voting power goes to players that have invested their time to salvaging since salvaging yields Technology Parts. Unlocking one technology over another does not prevent the other from being unlocked at a later time. Eventually all technology in a tree can be obtained, it just requires a lot of time to do so. We expect it to take days to fully unlock all technologies at a Vehicle Factory for example.

We hope this new approach will increase player agency when it comes to progressing the war, and will allow for more dynamic games as each side may end up with different technologies at a certain point in a war.

NOTE: This is purely a conceptual stage mockup of the technology tree UI. The content seen here (e.g. Wheelbarrow) IS NOT currently planned to ever be released and should not be considered a guideline for what to expect in the future.