How would you fight an offensive war if you'd lack the the offensive capabilities for that?

When we first introduced empires in ruins game mechanics, some puristsic gamers complained about our use of Tower Defense mechanics. The fact of having a map on which to expand using a defensive gameplay style sounded unnatural to some people, so we had to clarify the game settings. It is probably now time to set the explaination in stone with a blog entry. 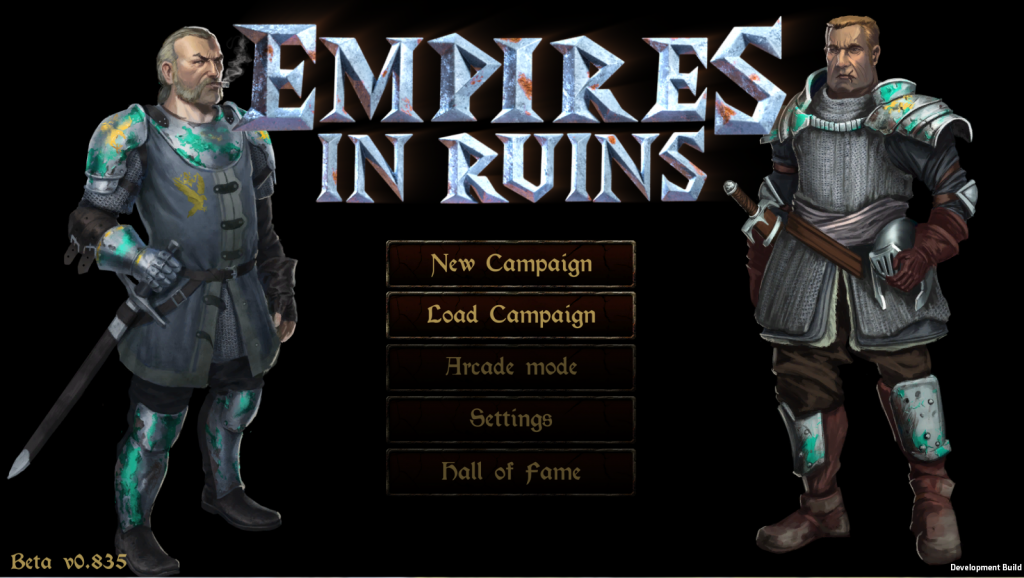 Heimer and Turg modeling for the Main Menu

Sgt.Hans Heimer (aka the player) is in charge of a little shabby military force of the Principality of Koth, being sent to quell the rebellion in the Western Marches, the farthest region from the capital, on the border with the Kingdom of Krovan. Although in the last decade no real conflict arose with the not so friendly neighbors, grudges between Koth and Krovan are ancient and deeply rooted. Therefore nobody in the nobility or the army wants to expose himself to the risks of such a campaign, and a perfect solution for everyone is to send Heimer in a punishment assignment. Everybody washing his hands of it. 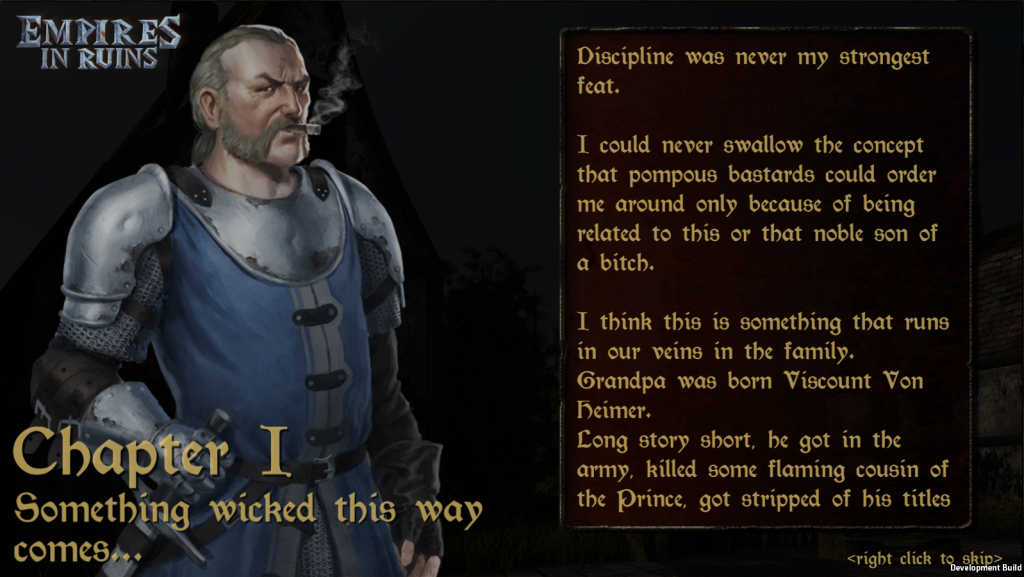 Some deep toughts from Heimer

Heimer therefore arrives in the last semi-stable outpost of the Crown in the Marches, the village of Kalameheir, and right upon arriving and verifying that the brandy his attendant bought is of really bad quality, is faced with a first riot in the "stable" village itself. The few men he has been assigned are all coming straight away from the royal prisons, lazy and alcoholic brutes, undisciplined and untrained, basically like Heimer himself. 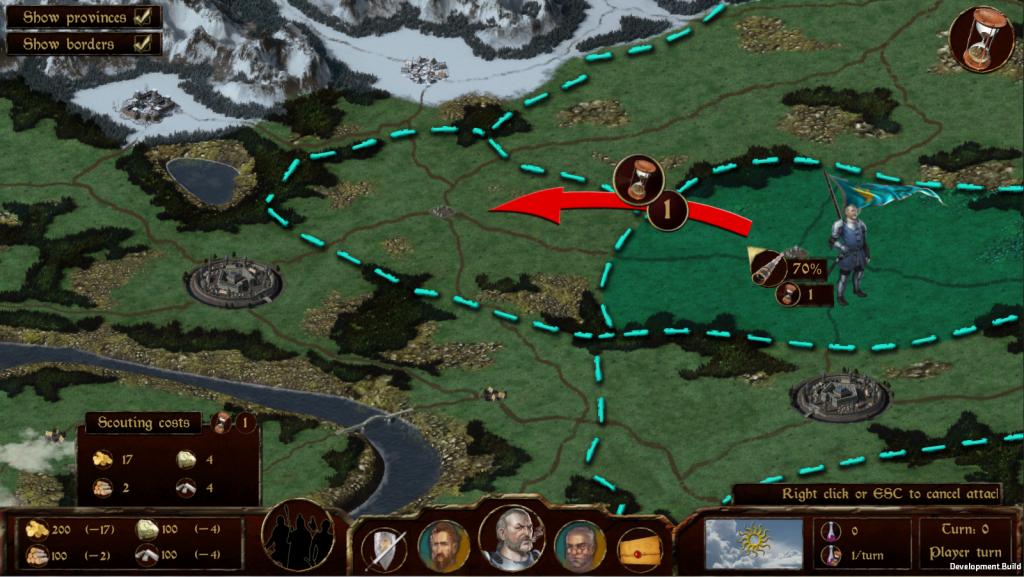 Preliminary scouting of an hostile province Upon suggestion of his attendant, Corporal Frederick Turg, Heimer faces the reality that no matter how chaotic the rebels are, he can't face them in open field, and has therefore to rely on scouting and ambushes and on baiting them into attacking. If there is one thing Heimer is really good at, is getting people pissed off and angry at him, so time to put this skill to use. 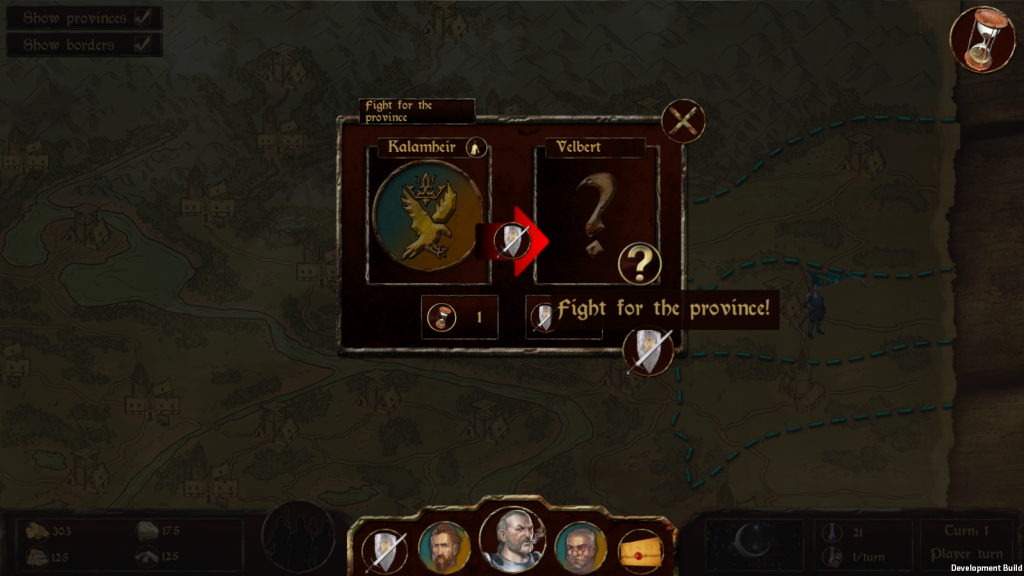 Much planning then blindly trying to take over a province

With the riots inflaming the Marches, Heimer starts sneaking his few soldiers into abandoned buildings and turning them into military assets, taking advantage of the grave diggers and workers he is forcefully recruiting around to oppose wood and stone constructions to the rebels chaotic "army". And of course, sometimes you also just need to burn down some of your own people houses, the good old (hey, don' try this at home, this is a game only!) punish one to educate many. 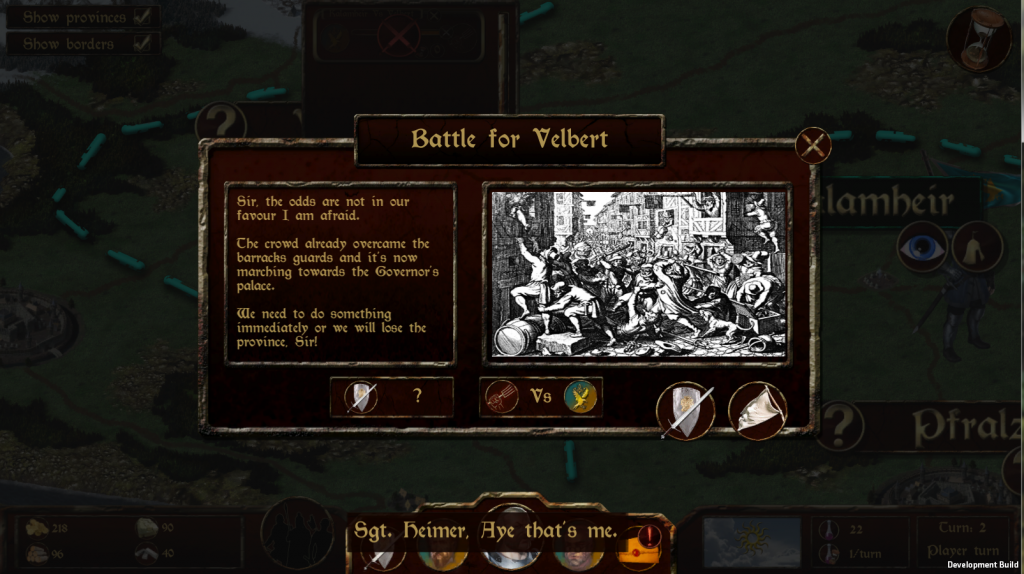 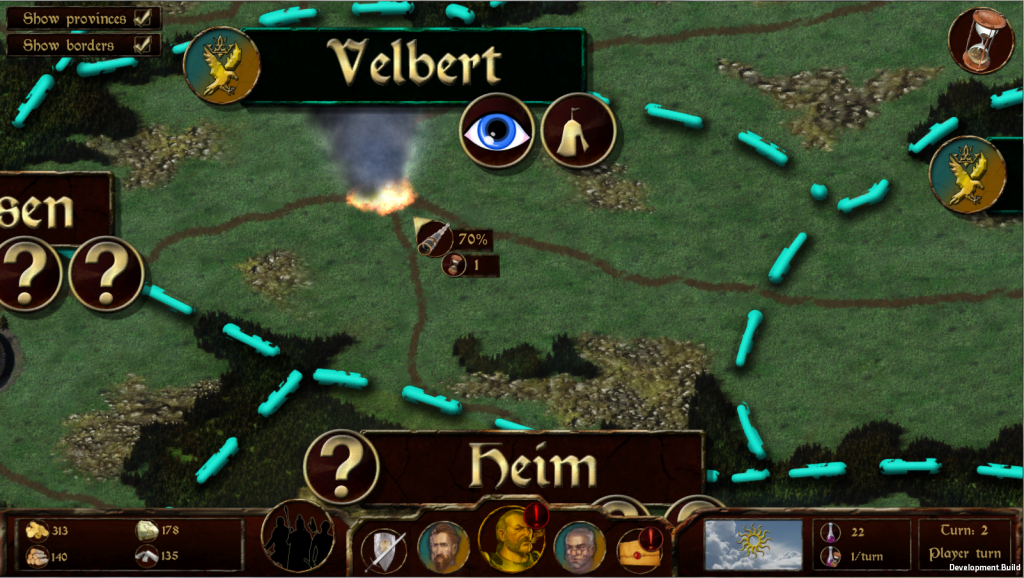 Some people just like to watch the world burn

The conquest of the Western Marches, and the progress in the campaign, is therefore not seeing as "Attacking province A from province B" in order to take over province A, but instead as "Sneaking into province A from province B while A is facing the riot, and bait the enemies into a trap build in place". At least that is so for the standard missions. Other missions use the TD-mechanics concept for example in order to protect a Bridge while Heimer's sappers take it down to slow down the enemy, preventing an enemy reinforcement caravan to reach a sensitive area, etc etc. The war fought in the Western Marches is unglorious, dirty and mean. A perfect mirror of Heimer's best personality traits.

To the next one!
Emiliano, H&R