Posted by MoralAnxietyStudio on Aug 14th, 2021

(Roadwarden is an illustrated text-based RPG in which you explore and change a hostile, grim realm. It combines game mechanics of RPGs, adventure games, and Visual Novels, and you can add it to your wishlist on Steam!)

Greetings, travelers! The new demo (which is available on Itch.io, and will soon be up on Steam) showcases the massive changes that the game went through over the last year and a half. Better writing, visuals, sounds, UI, mechanics, new activities... I’m so excited to share it.

I also keep adding new areas, dialogues, and quests, and updating the systems that were a part of the game since early 2019. I can say with confidence that Roadwarden IS an RPG now, not just an adventure game with RPG elements. I seek new ways to support the experience of being a lone traveler exploring a dangerous world, balancing these efforts with not making the game too complex. 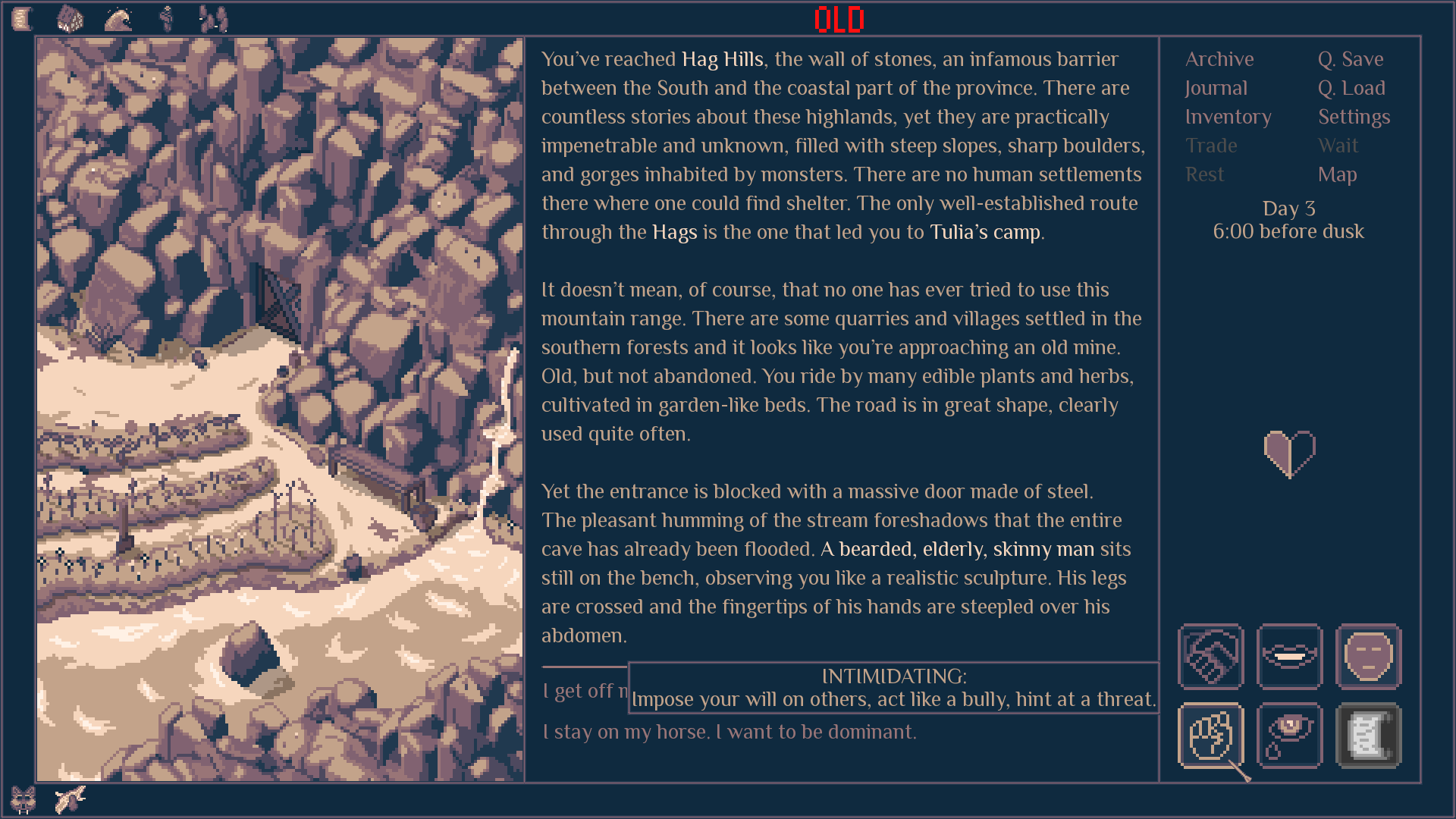 The demo-related parts of the game are now after their second draft. People not experienced with writing may be surprised to learn that this process didn’t add much volume to the text, quite the opposite. 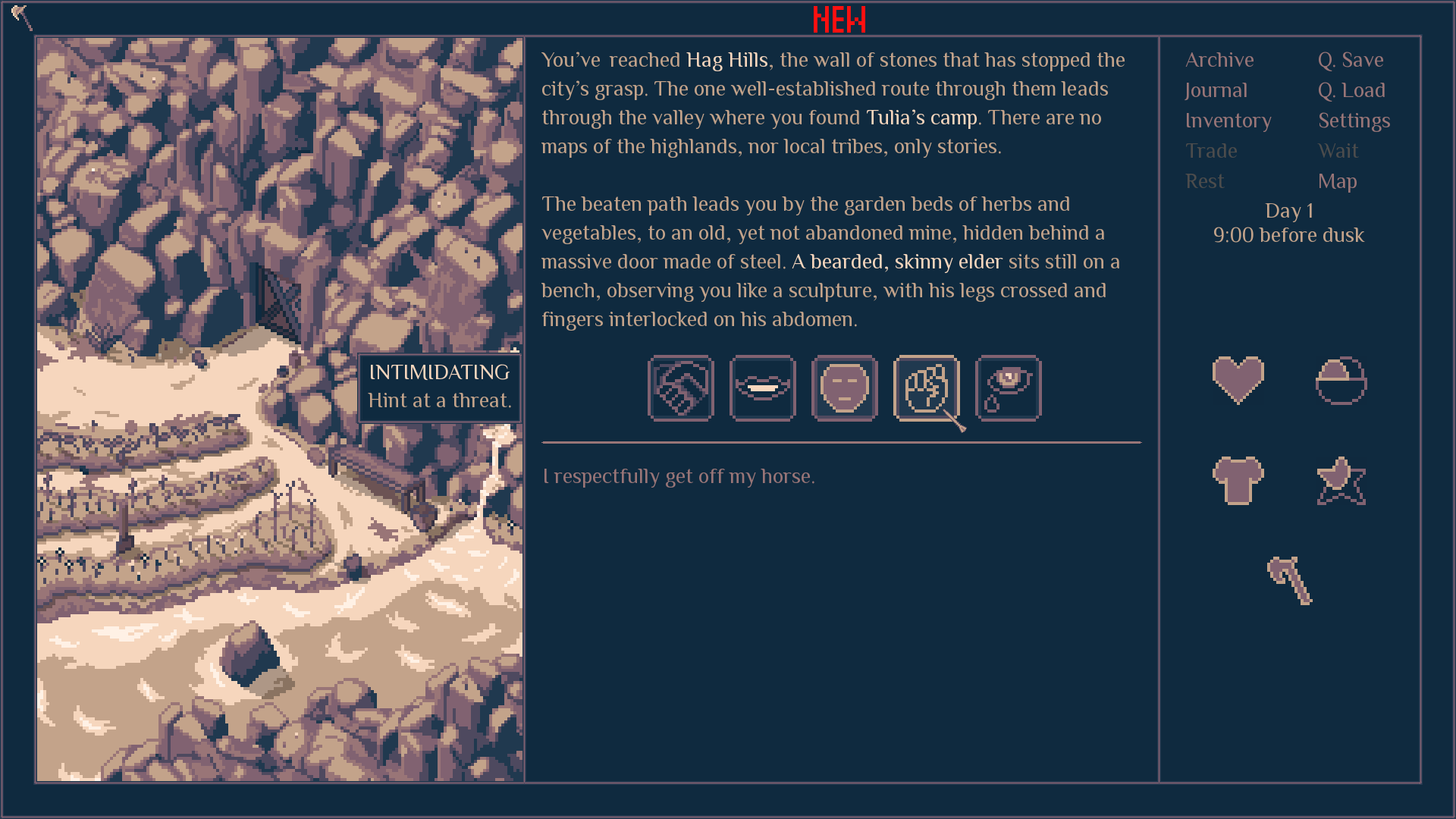 As I grow confident and learn more about English, I convey just as much (or more) information in fewer words. I put more trust in the way I express myself or describe objects, gestures, and places. The game’s illustrations don’t need as much explanation as they used to, and the new ambient sounds also help.

NPCs have more personality and quirks, with much less nodding, head shaking, smirking, and fist-clenching. There are also more role-playing choices and freedom when it comes to playing through various interactions. 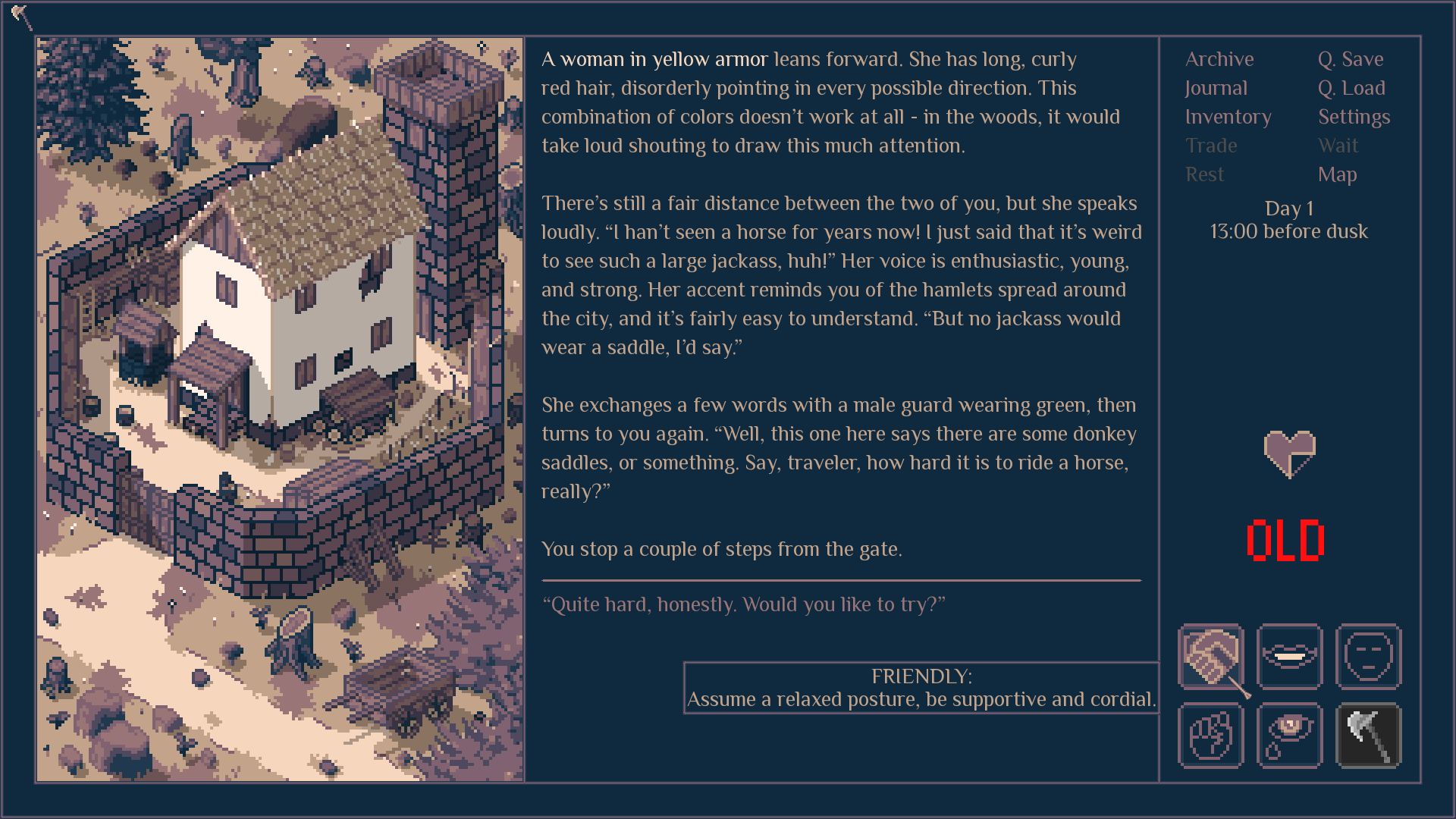 Attitudes were among the first ideas introduced to Roadwarden - a set of icons that are active whenever a PC encounters a new character or a group. They open new dialogue options and slightly alter how the protagonist is perceived, unlocking / hiding specific information and / or impacting the mood of the conversation. 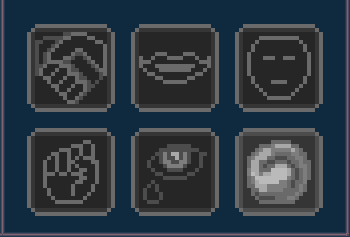 The issue was that for 99+% of the playtime they are deactivated, covering a corner of the screen with ugly shades of gray. The “unlocking” animation was easy to miss, and in some cases player simply didn’t notice they had an option to select them. 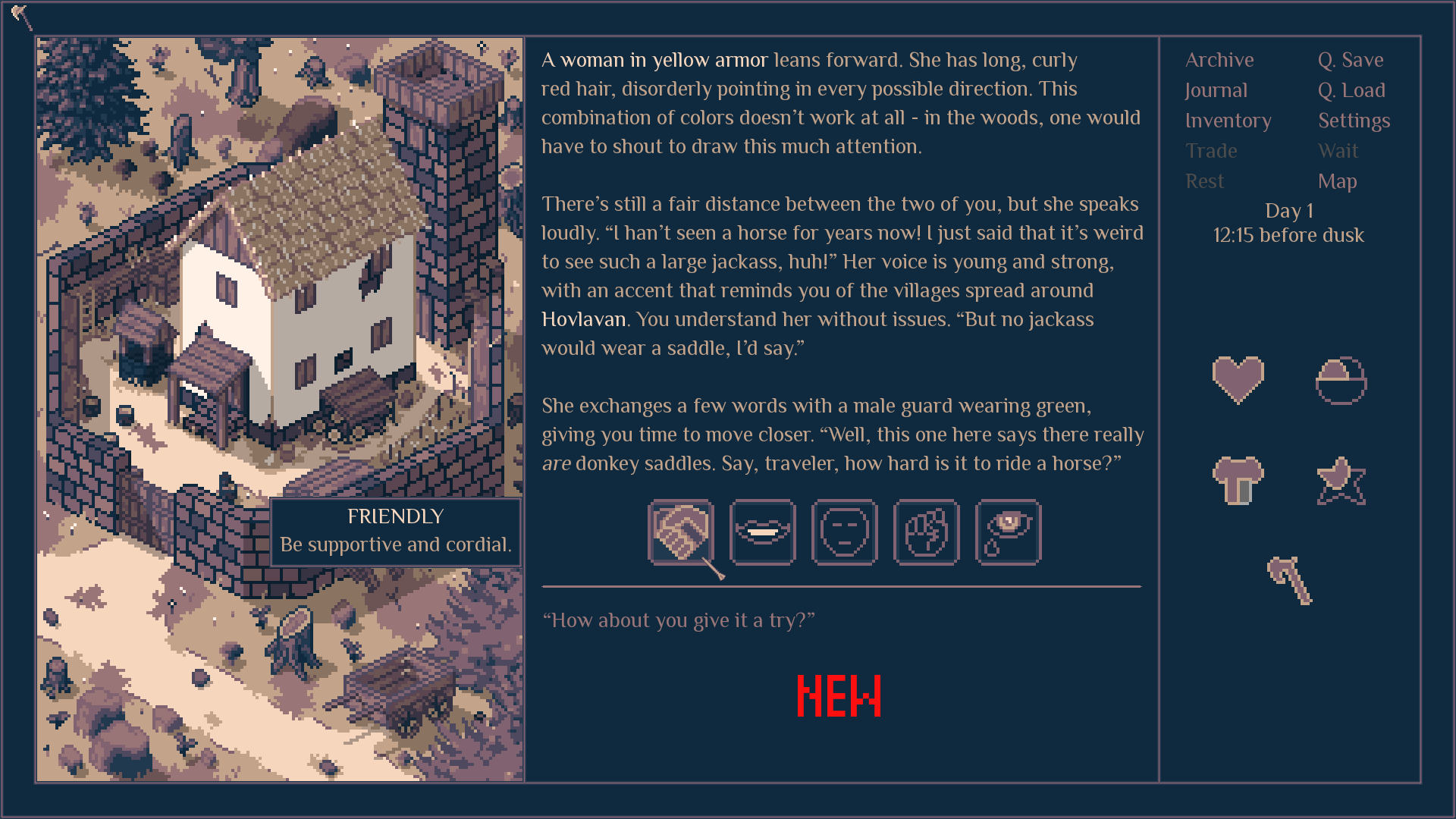 Now they can’t be omitted as the icons show up only when they’re relevant, and the screen is more tidy. This change also covers the special class skills: 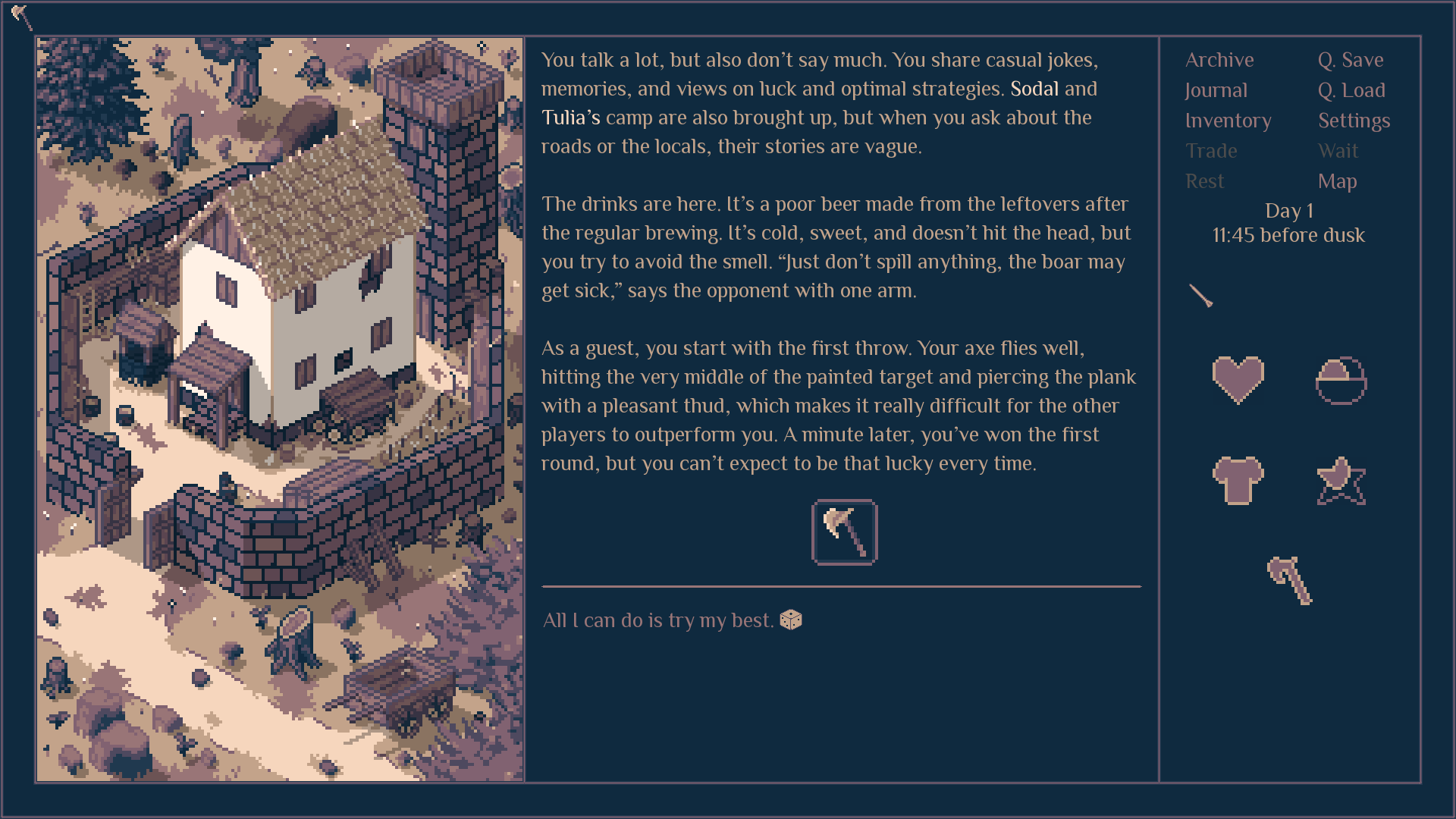 The system of having the Armor on a 1-3 lvl scale has been replaced with a 0-4 scale, and the player doesn’t have to *remember* the status of their Armor since it’s always displayed. 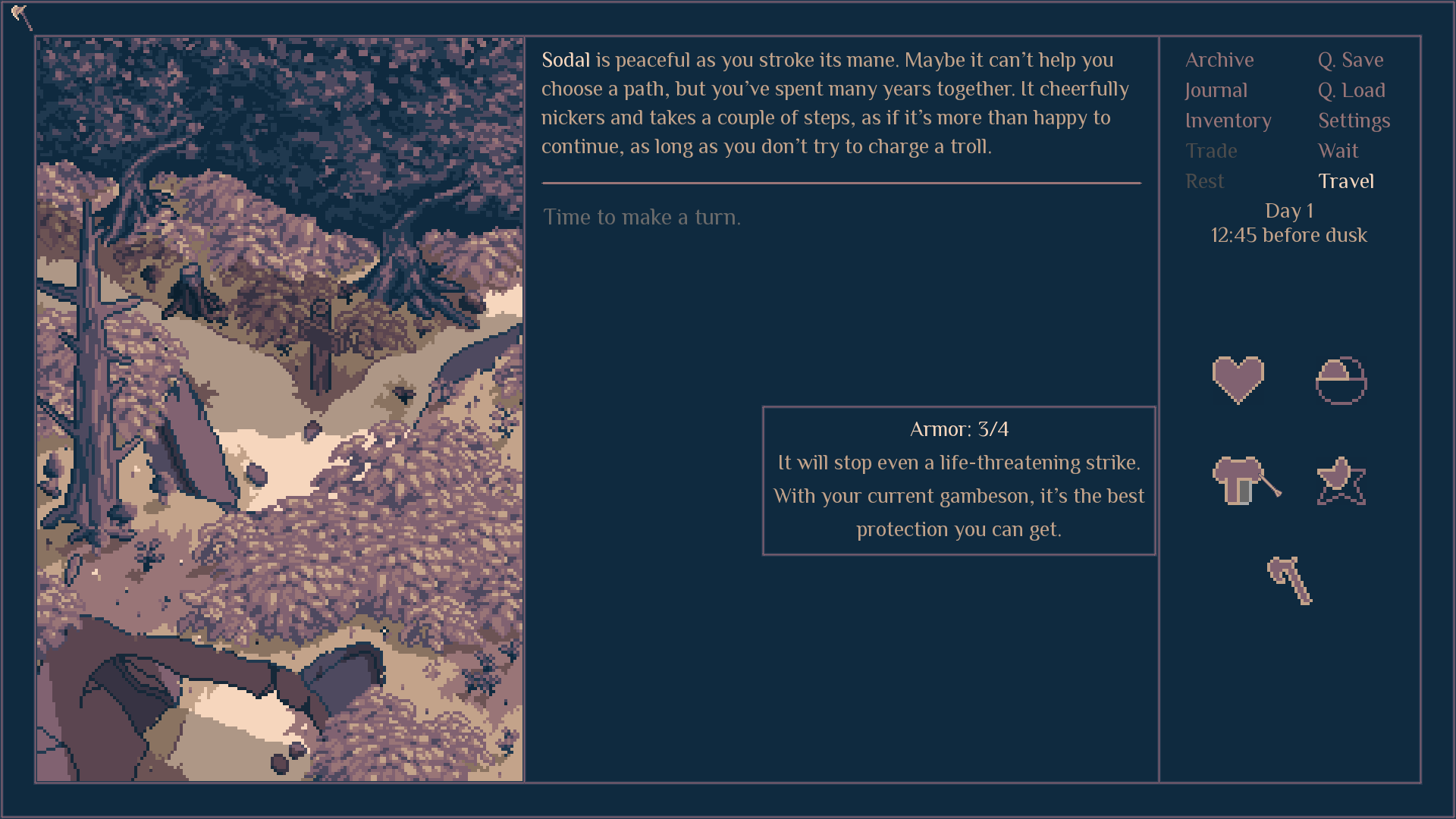 In the old system, lvl 1 gave no advantages, lvl 2 reduced the incoming damage - though usually only once, or slightly. Lvl 3 worked better, but needed a significant investment, and could also be reduced.

In the new system, lvl 0 offers no protection, lvls 1-2 offer slight wound reduction, and lvl 3 offers significant protection. Lvl 4 is locked at the start of the game and can be unlocked in at least two different ways. Fixing armor is much cheaper, but its lvl gets lowered more often. 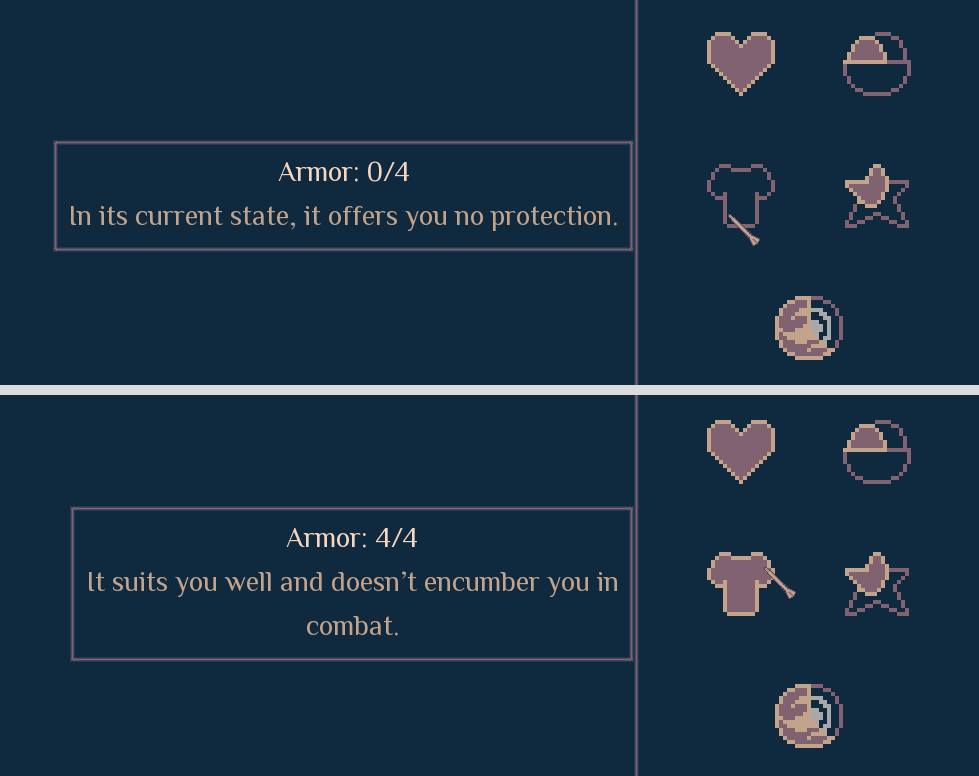 Lvl 4 now adds a small modifier during combat and other physical challenges. There’s also going to be three NPCs that offers armor-fixing services, instead of one.

The player can decide to save money by purchasing a special item that allows them to fix their armor wherever they are, though they need more time (and experience) to efficiently use it. 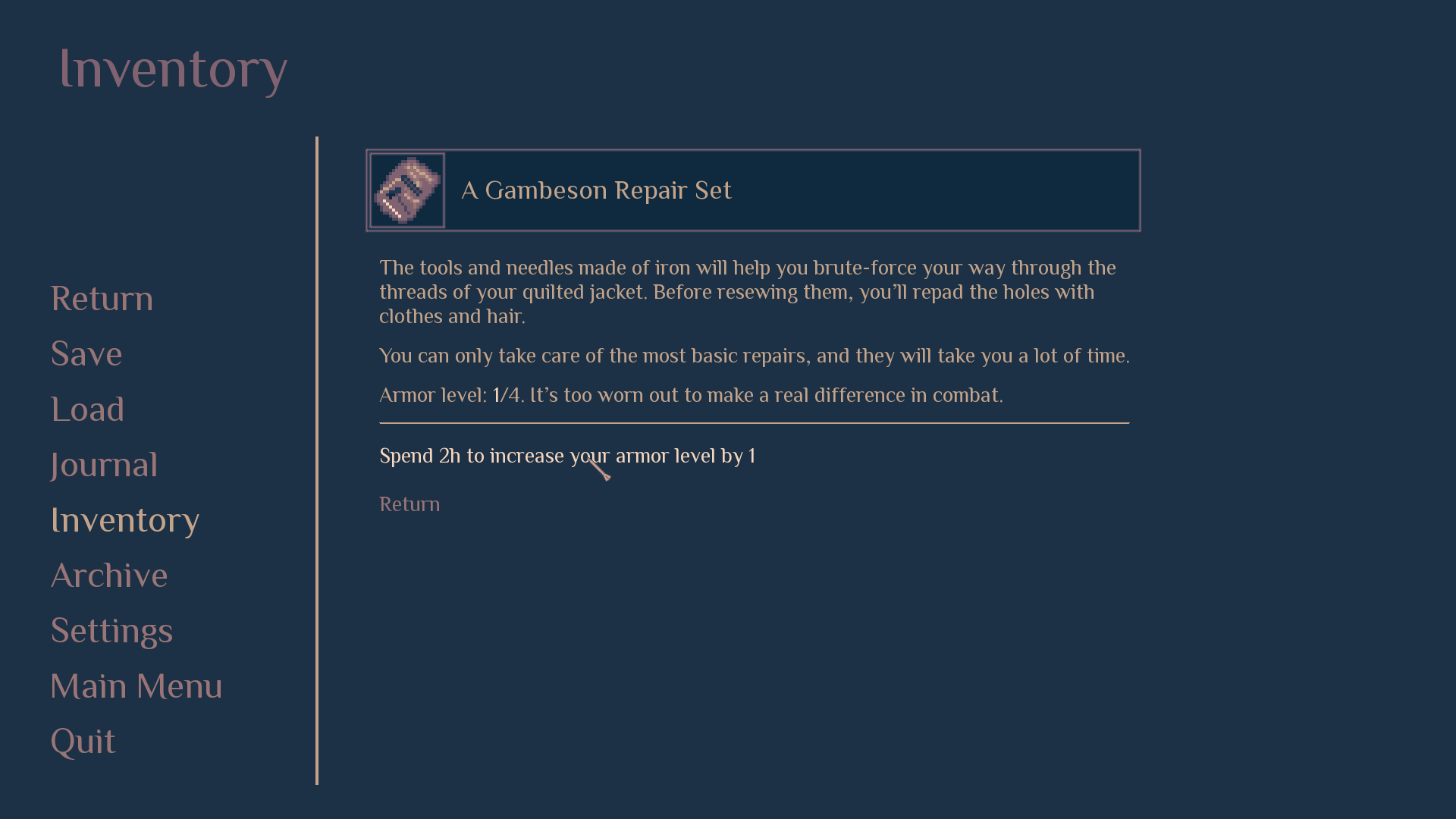 I disliked the original version for a long time. A PC could be either hungry or full. Sleeping while being hungry would reduce their HP by 1 (or they would recover 1 HP less). There was a cosmetic difference between having a simple meal or a luxurious one, but it didn’t mean anything stat-wise, and no matter how satiated the PC was, they would get hungry after every night.

The new system uses the 0-4 scale, just like HP and armor. Sleeping reduces it by 2 and different meals offer customized amounts of Nourishment points. A baked fish or a few fruits will give you 1, a food ration or a simple meal - 2, a luxurious meal - 3 or 4. 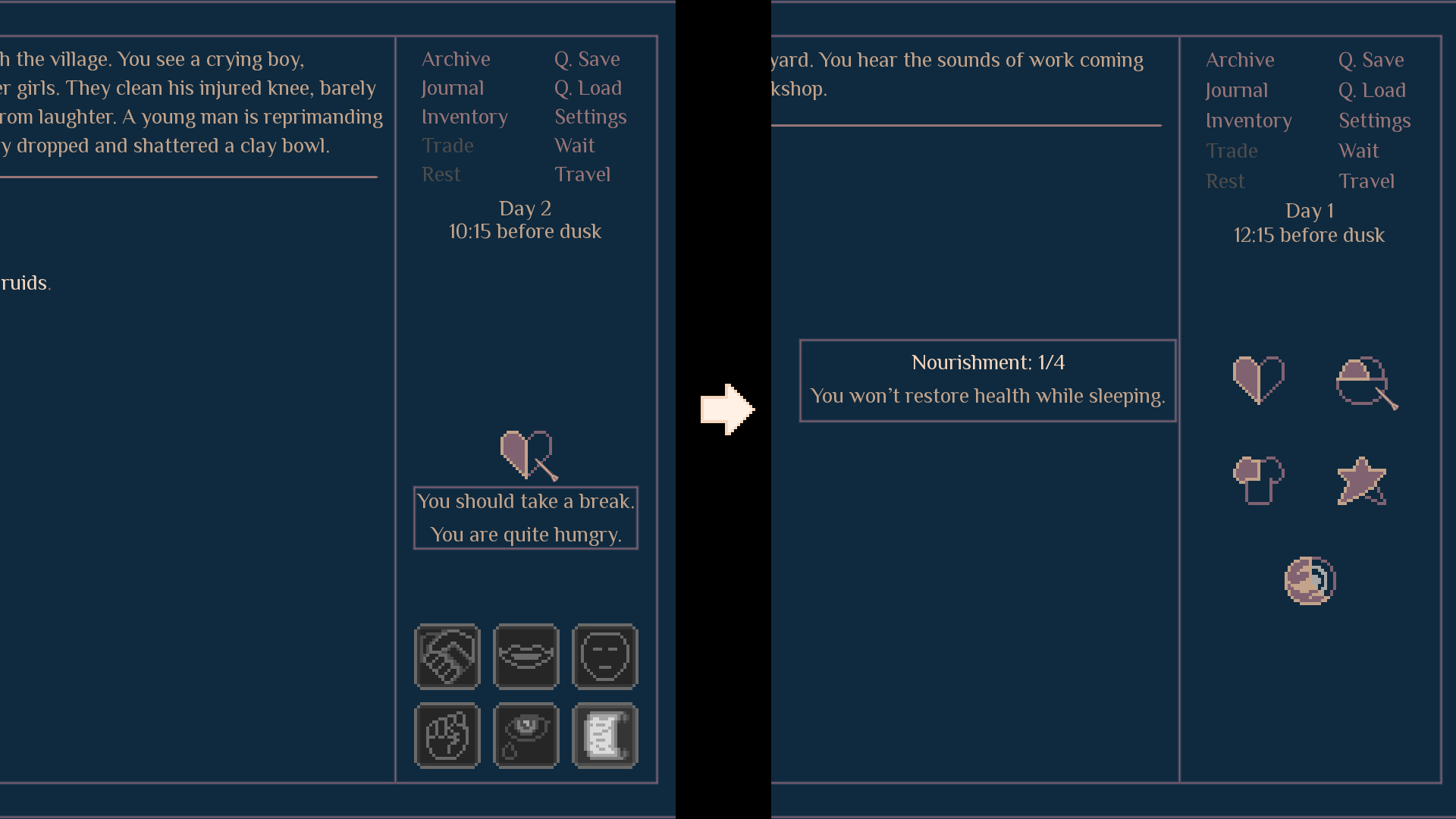 Having 0 or 1 Nourishment points won’t “damage” the character while sleeping, instead negating any sort of HP gained during the night - what in most cases is a lighter penalty, but in others is much more severe.

Having no Nourishment points makes physical struggles more challenging, while 3 or 4 points adds bonuses to dice rolls, especially in combat. This way, there’s value in not only avoiding the lower numbers, but also maintaining the higher ones. 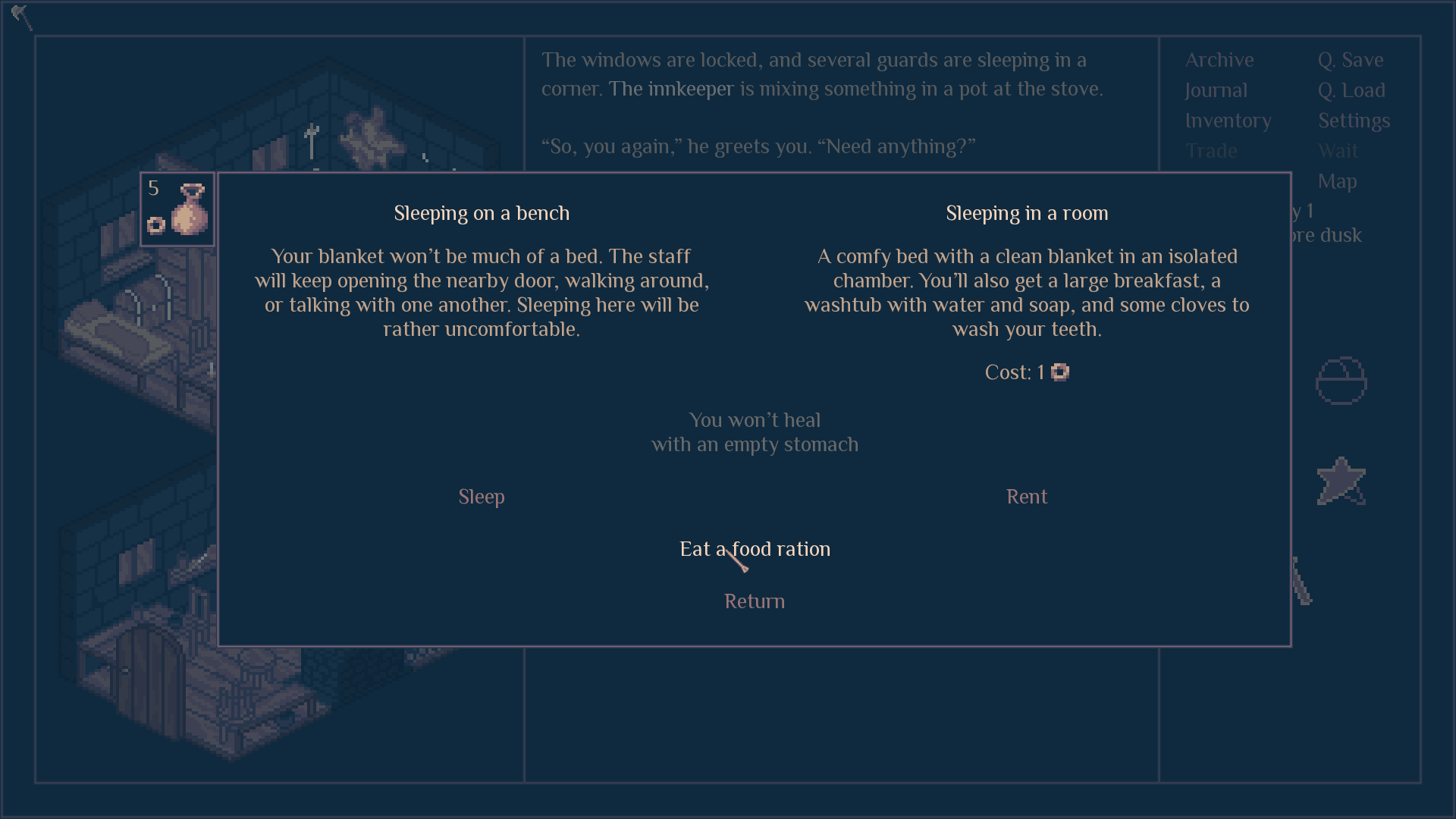 For some time now, combat results were linked to various statistics and items. Higher HP or better weapons were the obvious ones, but as the time went on, more details have also been added to the list.

Taking into consideration Nourishment and Armor levels allows a player to plan ahead and prepare themselves before traveling to a dangerous spot, which will often mean spending more time and money. It adds to the previous preparations - improving one’s HP points, gathering information from the locals, and purchasing or finding new equipment.

Being on a 0-5 scale, the Appearance either hinders interactions with NPCs or allows a PC to get more from them. It adds penalties and bonuses to friendship and reputation levels and alters prices of bought or sold equipment and merchandise, especially one that’s on the pricier side. 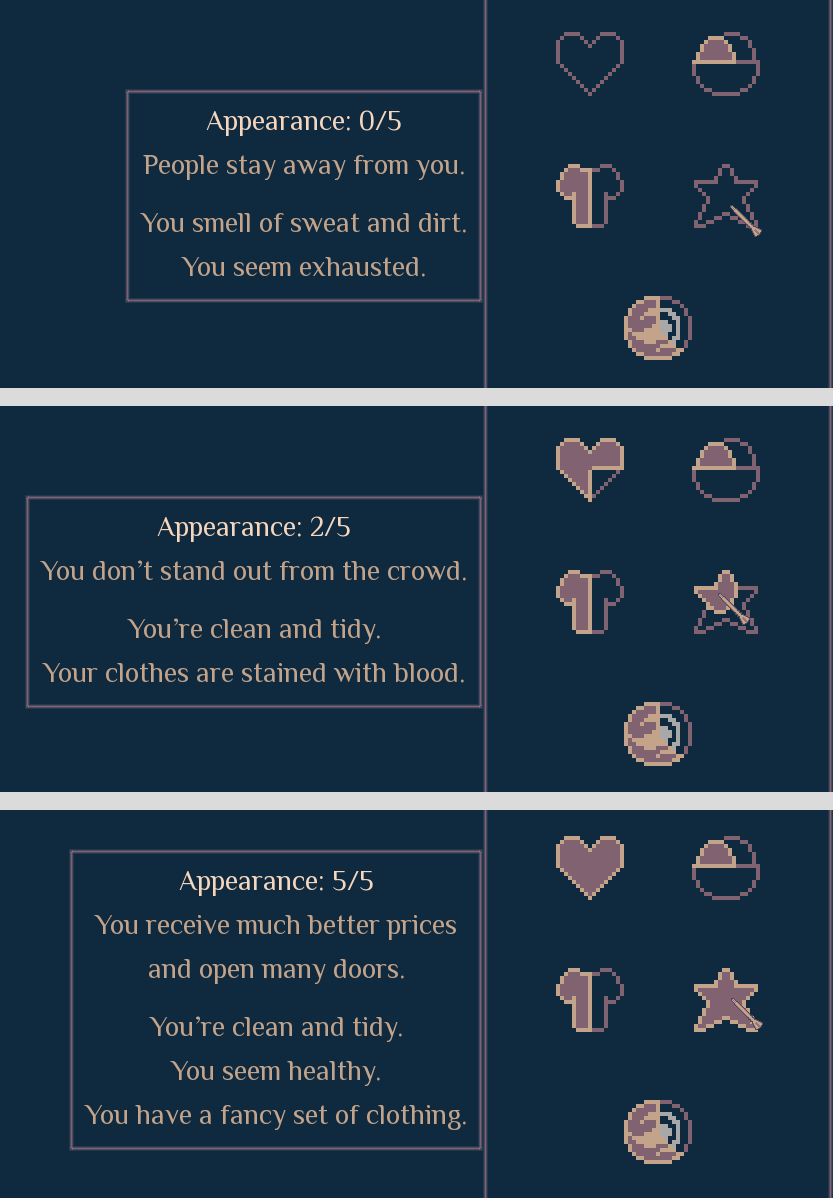 The appearance level considers a few factors. The level of cleanliness, the condition of PC’s clothes (which can be either damaged or not), having the outfit covered with blood, and being either strong and healthy, or weak to the point of exhaustion. 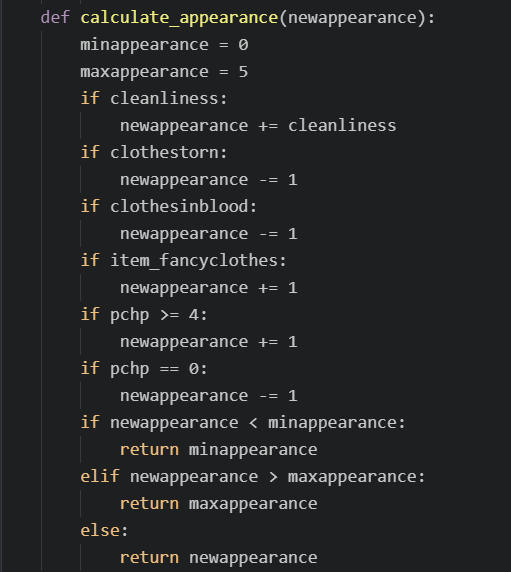 There are various ways to wash oneself and adjust one’s clothing, but it takes time. I hope to build a system which encourages players to get familiar with various bodies of water in the game and use them to get nice and tidy even before they reach various settlements, so they can make a better first impression.

There are also items which can be used to manipulate the effectiveness of various cleaning spots. 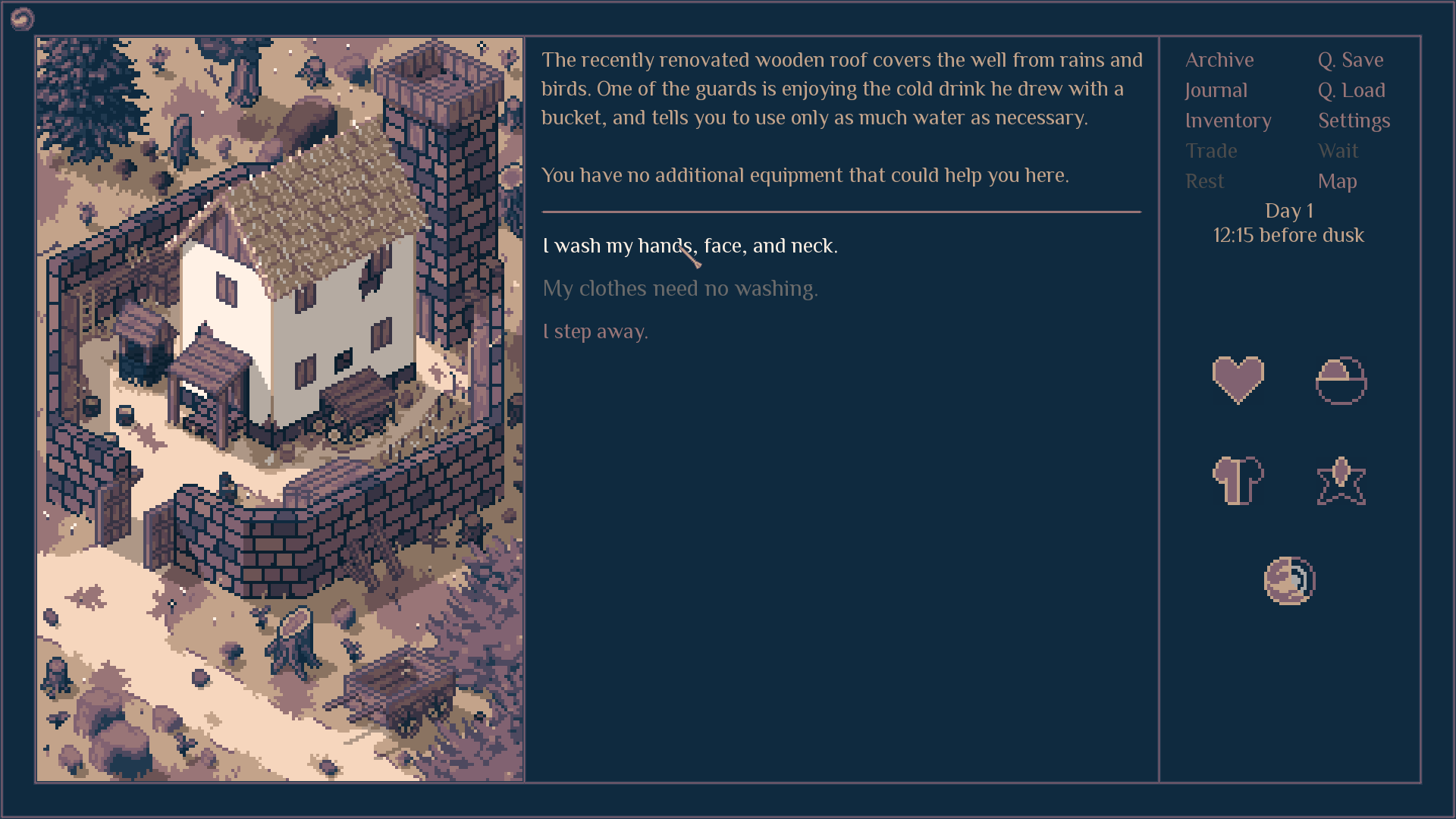 To unlock the highest possible level of appearance, a PC will have an option to buy a fancy set of clothing. Its price will be reduced by various factors, but in general, it’s meant to be an investment, not an obvious must-have piece of equipment. I also consider giving the fancy outfit (which can be either a tunic, a robe, or a dress) an ability to ignore the regular “torn” or “bloodied” statuses since there’s the understanding that a PC switches between it and a regular outfit depending on where they are. 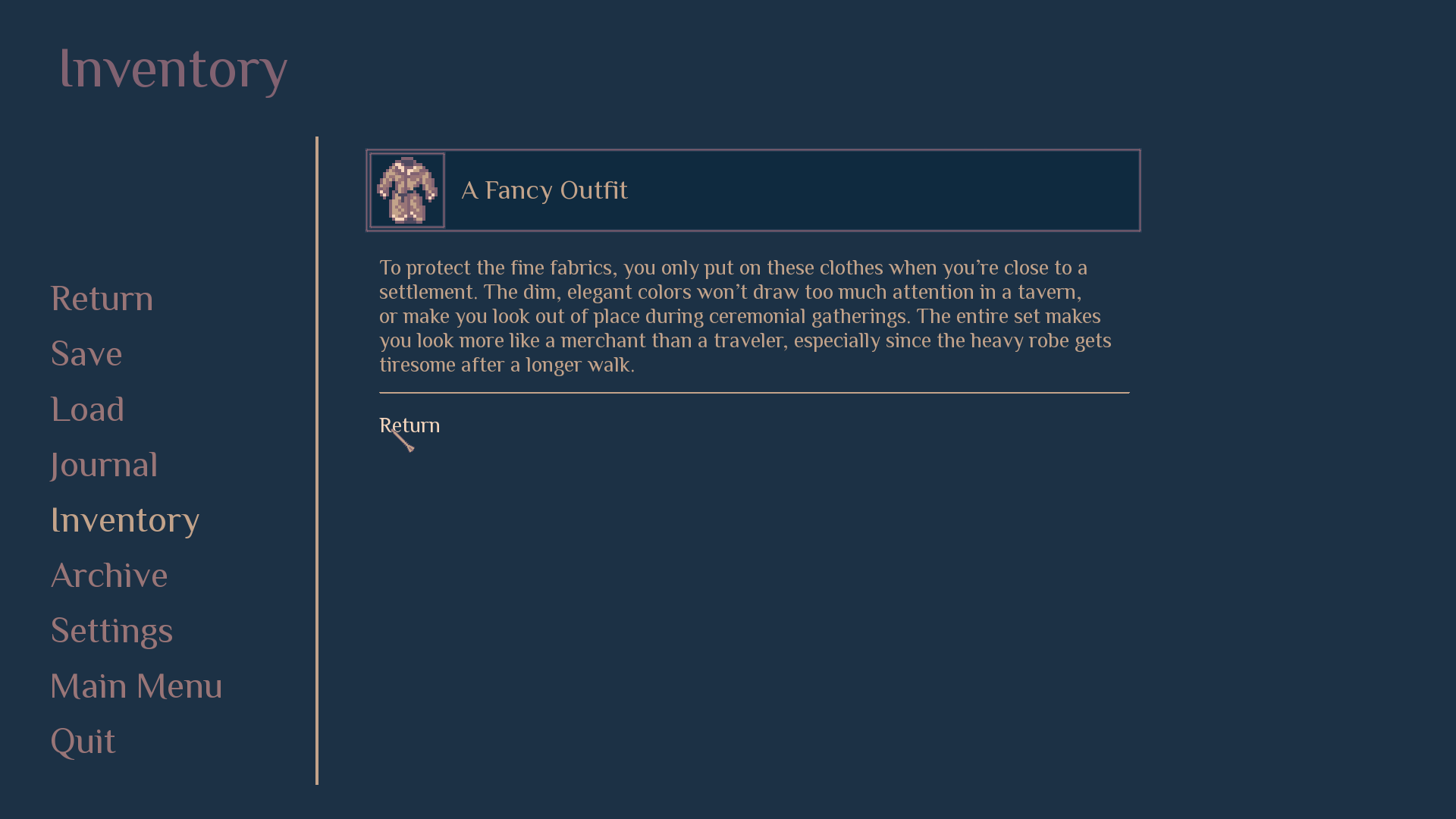 While the game uses Appearance mostly to influence other numbers, in the future I hope to use it to alter dialogues by giving NPCs small comments on PC’s clothes and, for example, smell.

The core goal of the Appearance system was to give a player more perceptible results of actions that involve dirt and struggles, and to support the idea that a PC can gain an advantage by manipulating others - just as with lying and Attitudes.

It used to be that a PC had to pay a lot of money to unlock the Bestiary during a conversation with a special NPC, but after adding many more creatures to the game it turned out that the player was suddenly hit with a lore dump. In the meantime, various creatures are mentioned by NPCs, rarely giving any explanation on what they even are since, in the game’s logic, a PC should already have a shared knowledge. 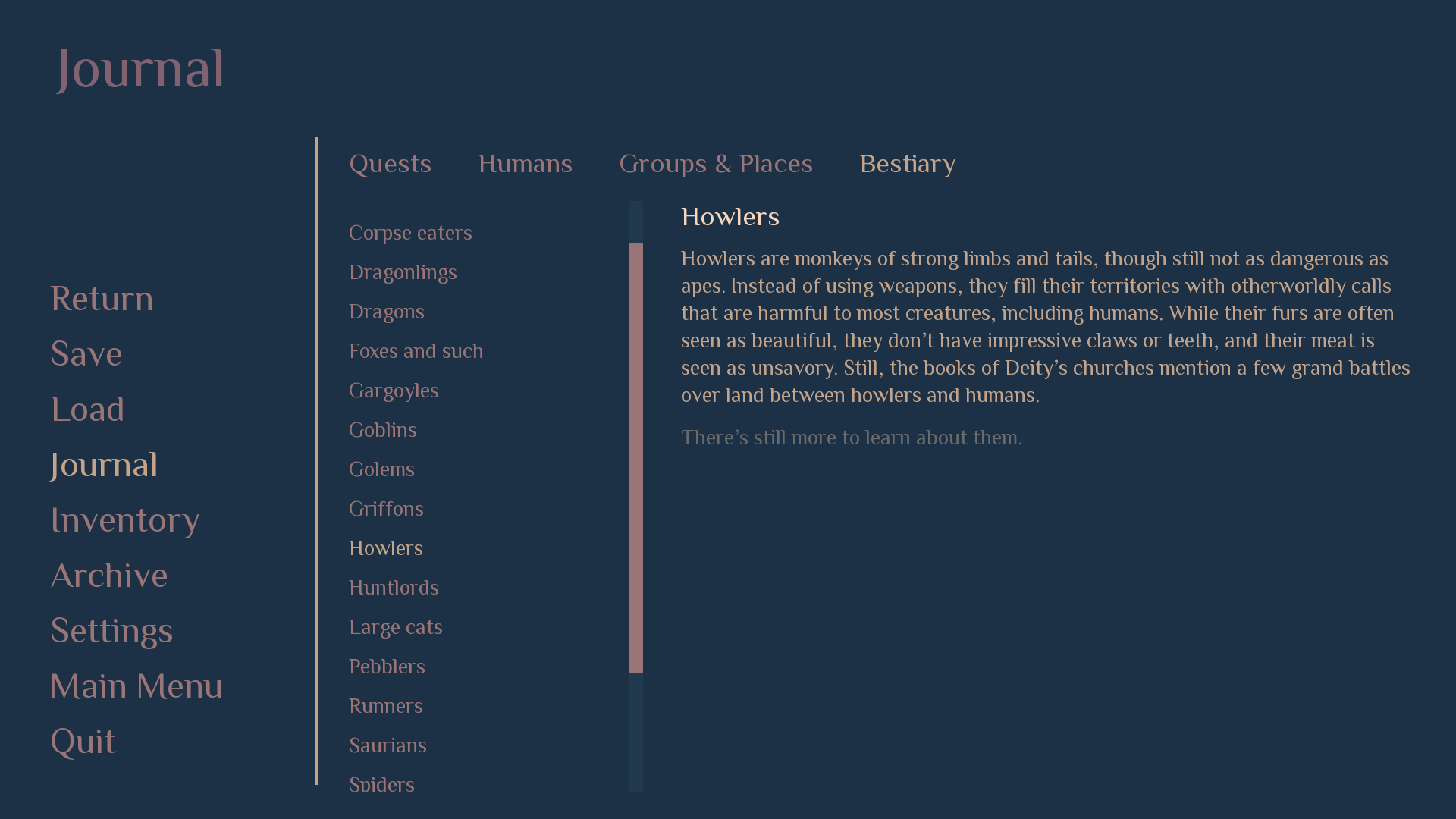 The new Bestiary, with its “basic” lore, is available from the start of the game, while additional details and tips on how to defeat specific monsters are added during various interactions and conversations. The NPC who used to unlock this section of the game now only speaks about the new stuff, making their tales brief and to the point.

Every time I’m convinced I’m done with it, I find new ways to update the game’s presentation. I started with taking to heart the criticisms of the game’s title screen: 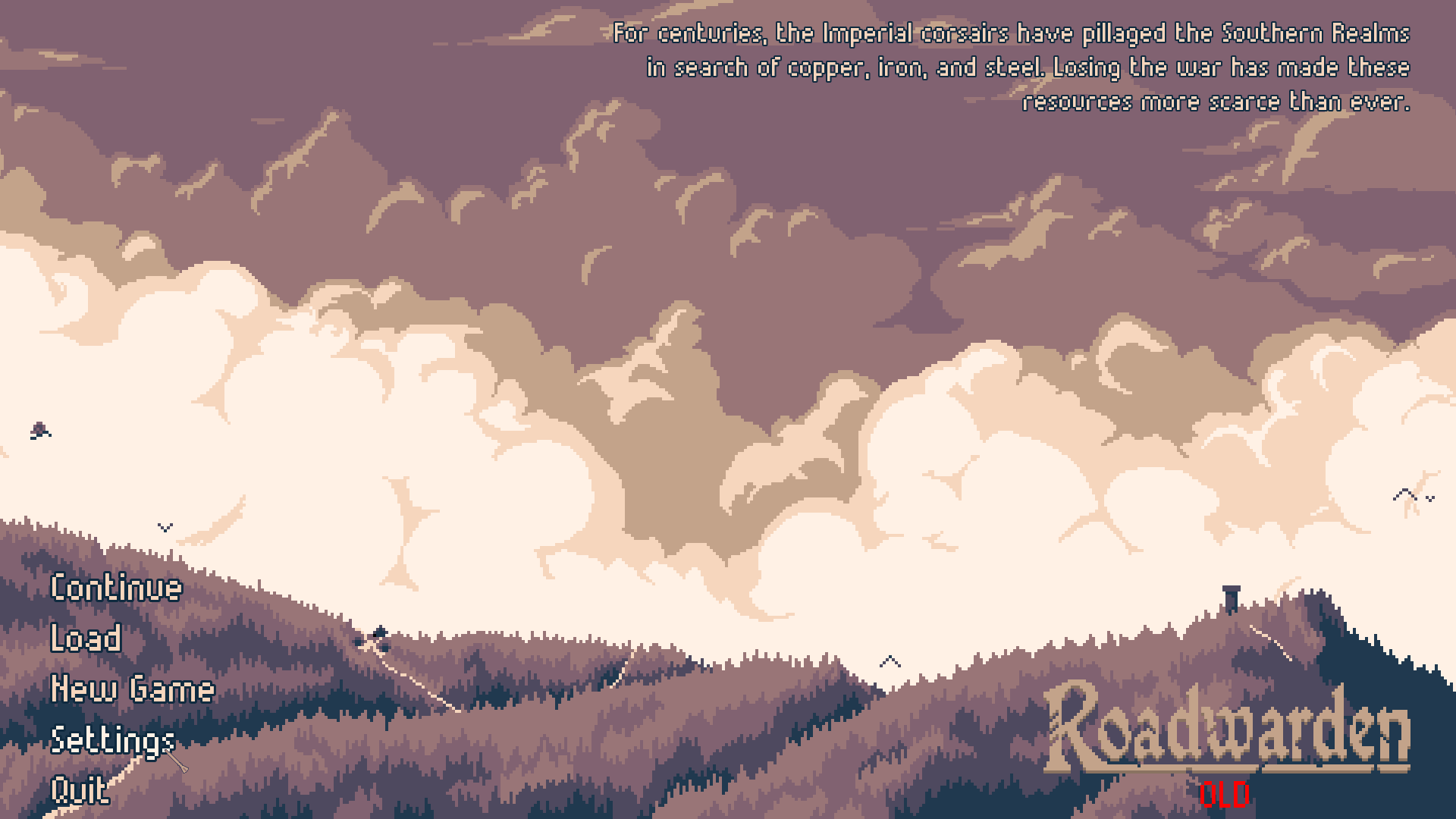 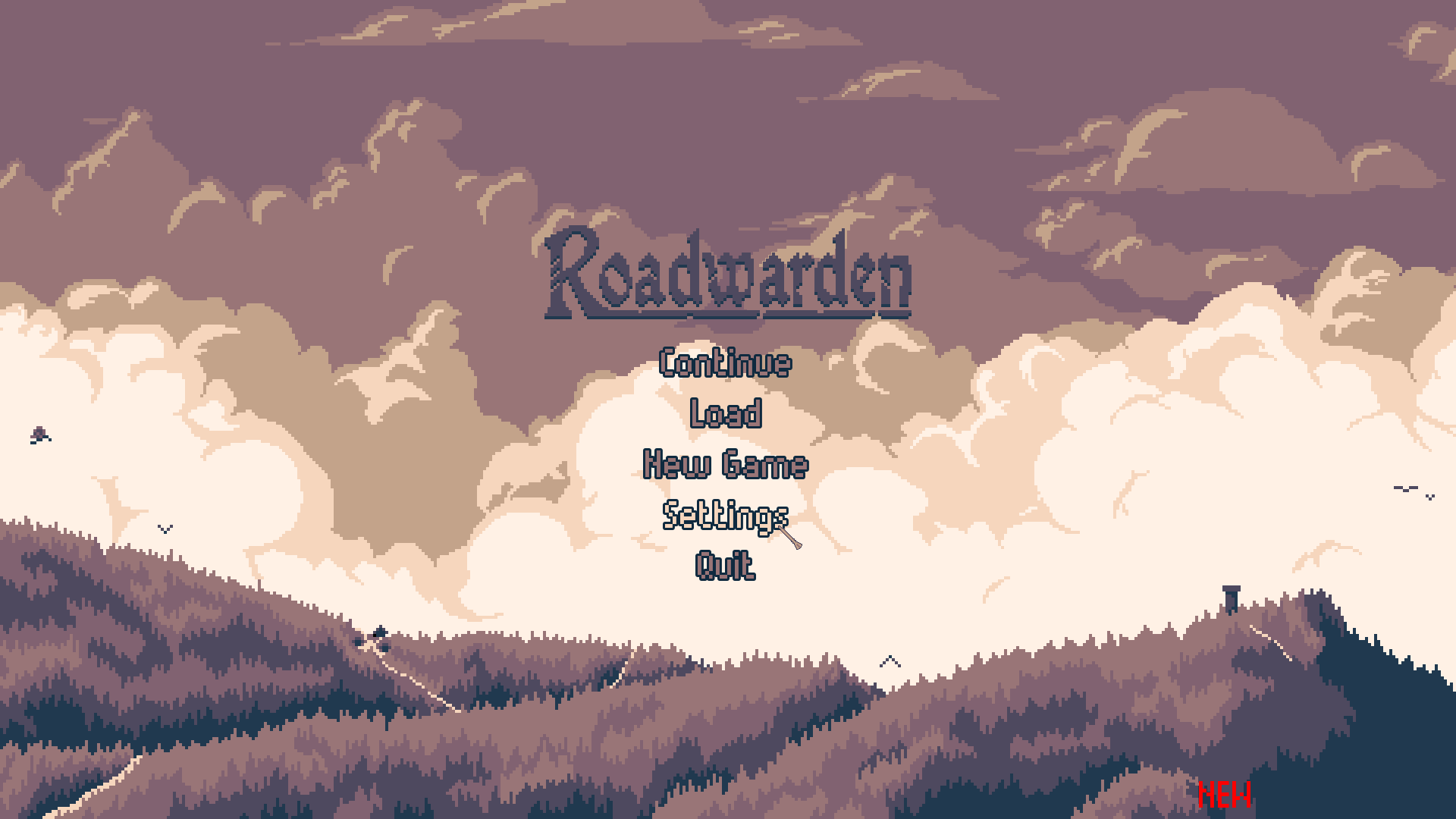 It made the original random quotes appearing at the top of the screen too jarring, so I moved them to a special box that appears whenever the game is launched. They can also be turned off in the game’s settings. 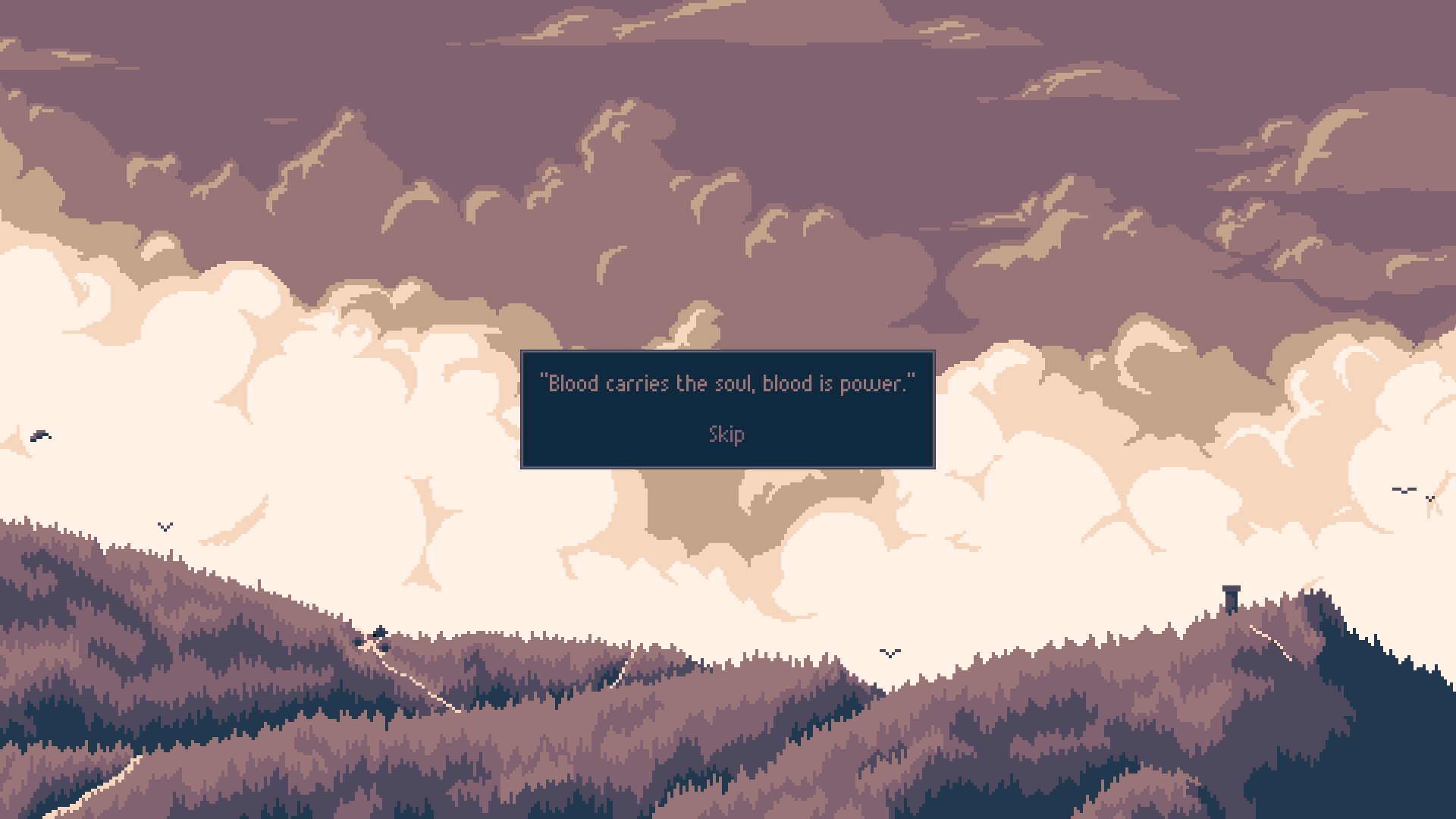 The more advanced menu changes are difficult to show. In general, the sections now properly fade in and out, gently shifting between various modes instead of using rapid transitions.

Some traveling illustrations were altered. They rarely use the world map icons, now more often using cute little pictures that I love beyond logic: 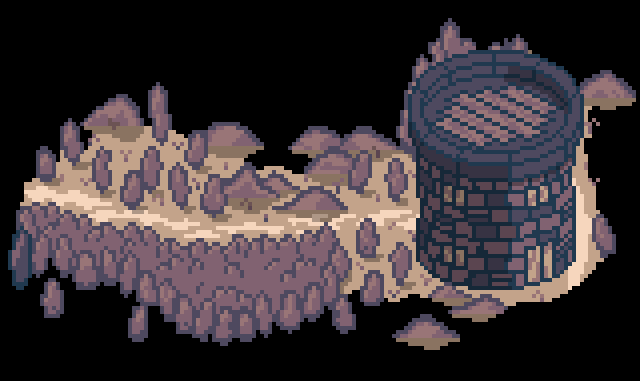 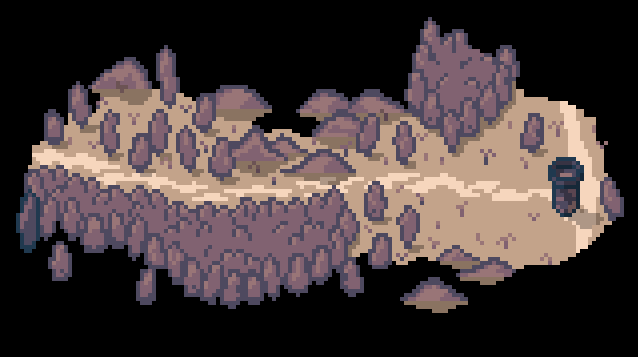 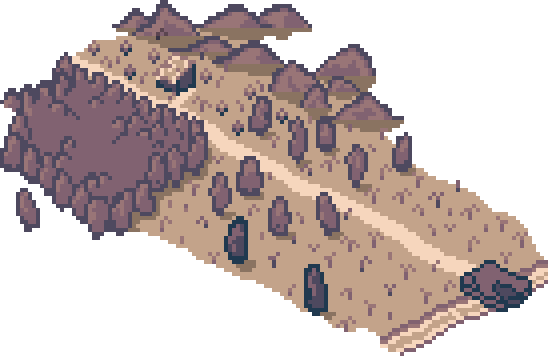 And since it was important to keep PC’s mana points displayed at all times, I found a way to present the character class skills as a part of the UI, even though the “Attitude icons” are now gone. 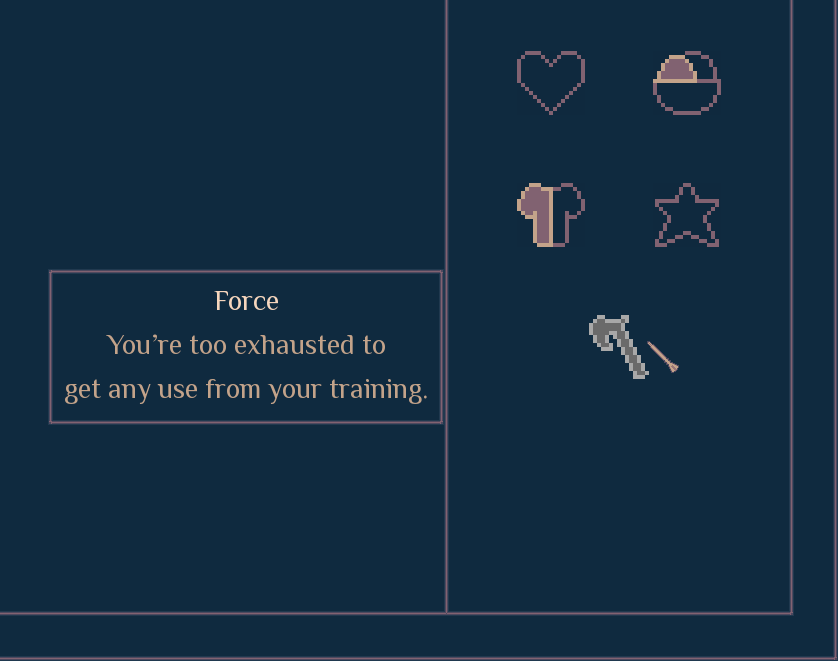 I also added a silly splash screen to make it clear that the game is launching. It helps me during development, but there’s a chance I’ll remove it before the full release.

Working on the vocabulary (part 2)

Another SPICY set of game’s world updates. : P This time related not so much to spirituality and magic, as it is to the setting’s politics. The game’s fantasy setting, Viaticum, has finally received a massive update! (nerd alert)

As the game got larger, keeping the city’s name vague was getting more and more awkward. I also added Hovlavan to the journal, gathering any city-related details that the player either discovers during their journey or sets as “facts” whenever they are asked about it by NPCs.

Empire (the state) -> The Ten Cities

Empire (the land) -> The Dragonwoods

There were also other changes, but let’s keep them a secret. ^^

The new alchemy system for scholars was recently reworked for the 3rd time, and I believe each version is an improvement. 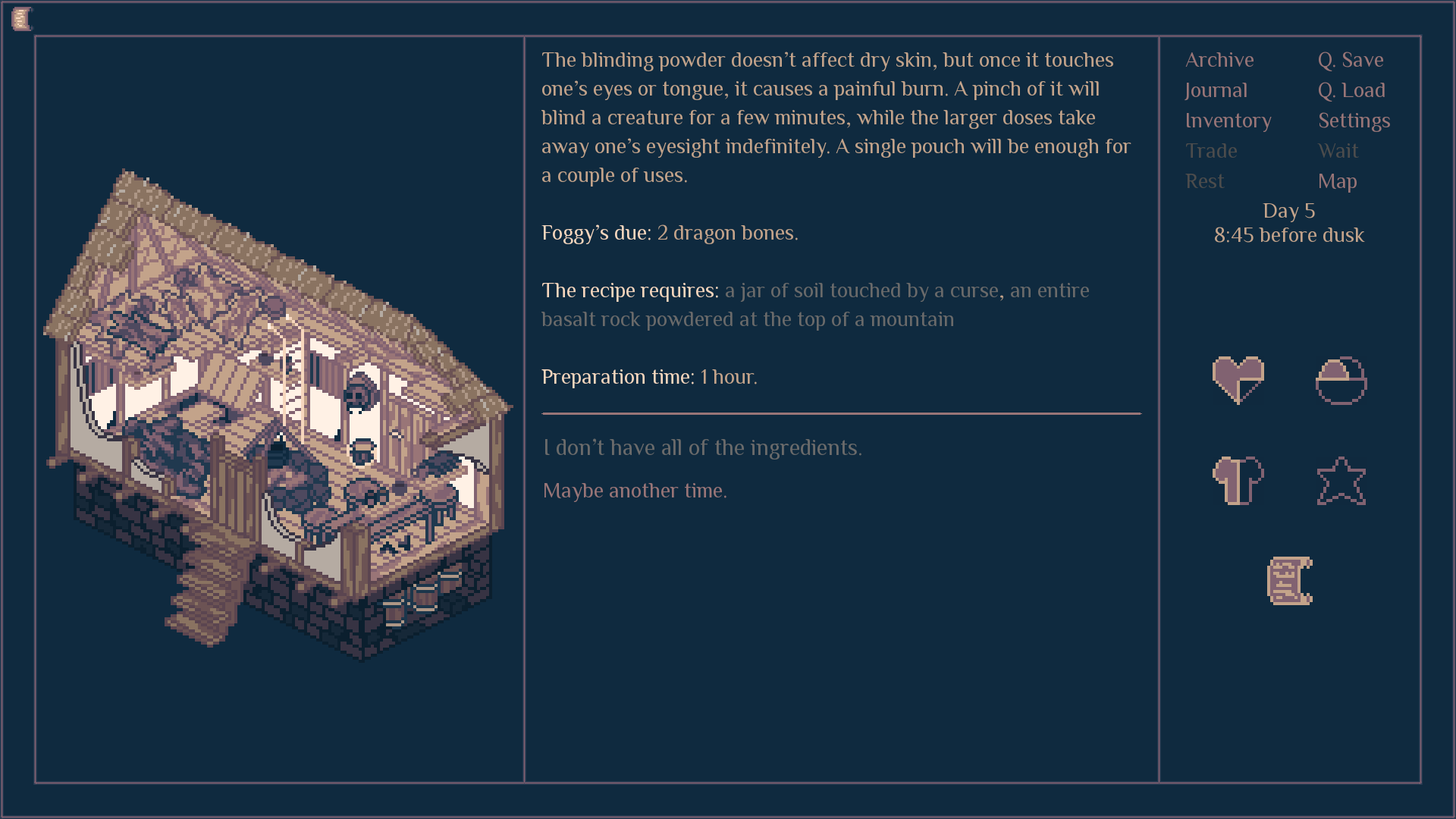 The new fishing system allows the players to gain an unreliable source of fish (which can be baked for food or sold to some NPCs) by setting up traps at various bodies of water, which then can be checked on during PC’s patrols. I wouldn’t call this a minigame, but these tiny interactions add both to the “living off the land” vibe and to the “getting used to the familiar roads” progression. 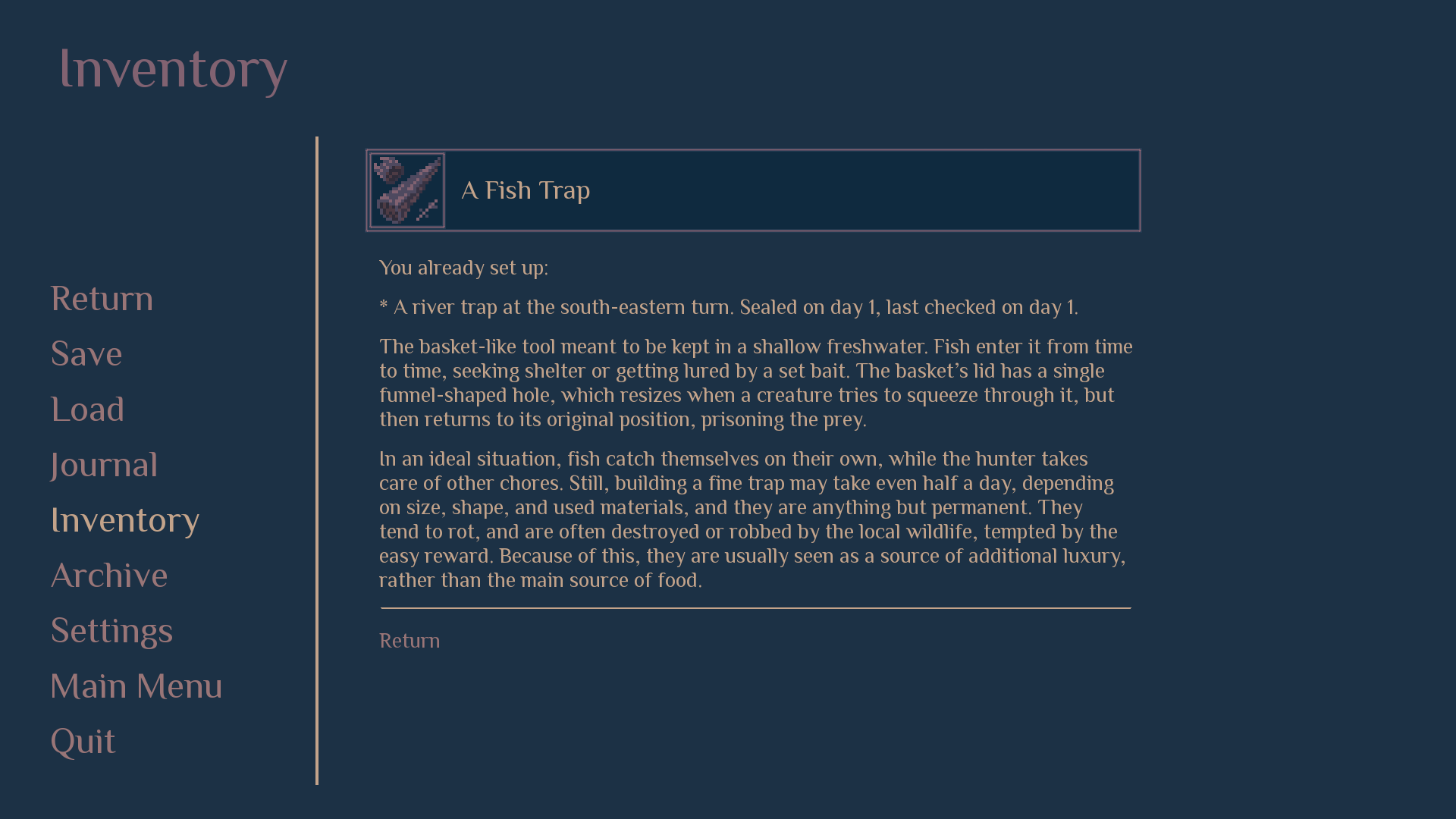 The new settings now take a bit of scrolling, but explain things clearer: 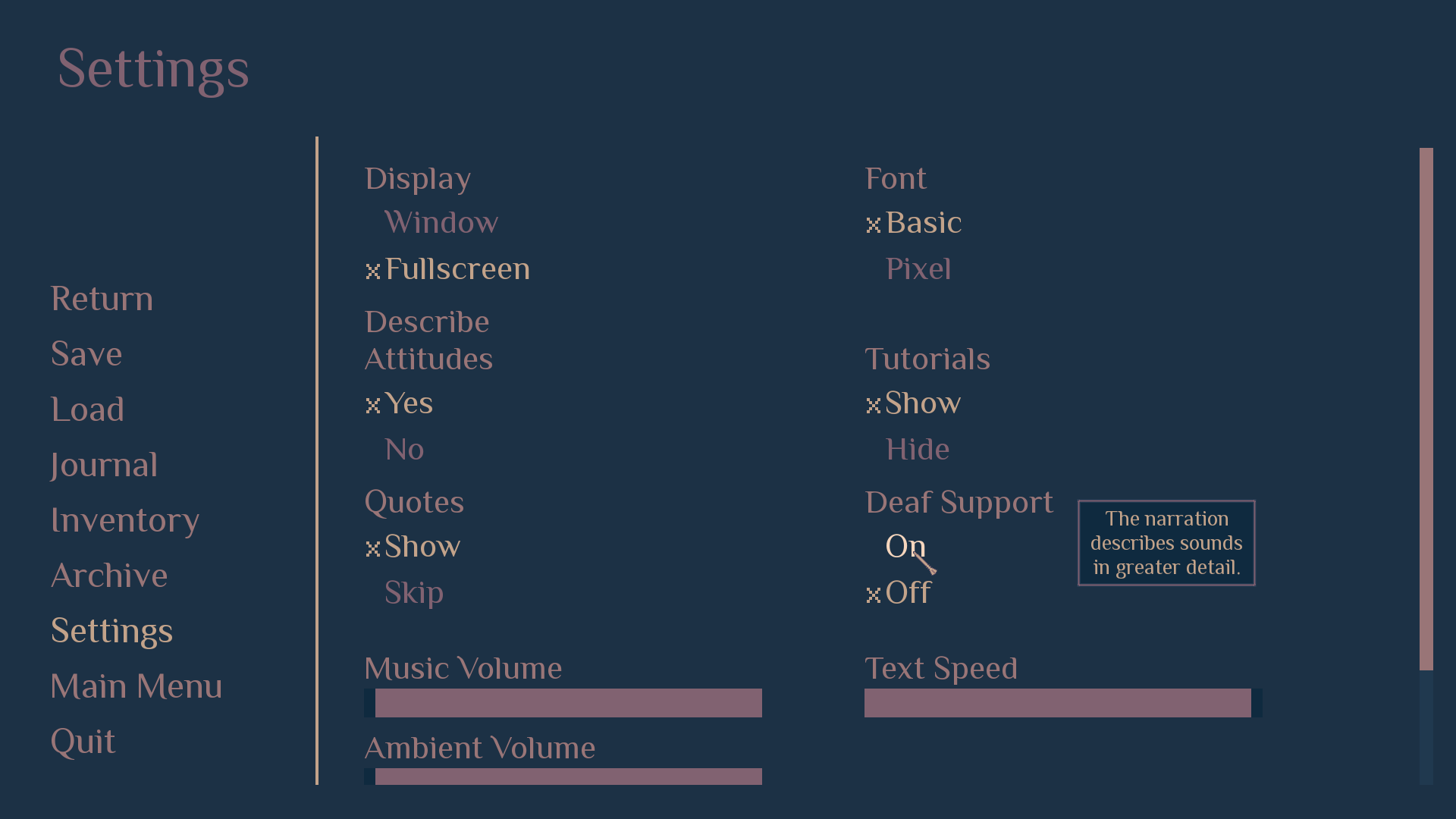 The temporary notifications that show up on the screen are now added to the game’s Archive. Both the small textboxes and the stats-change animations: 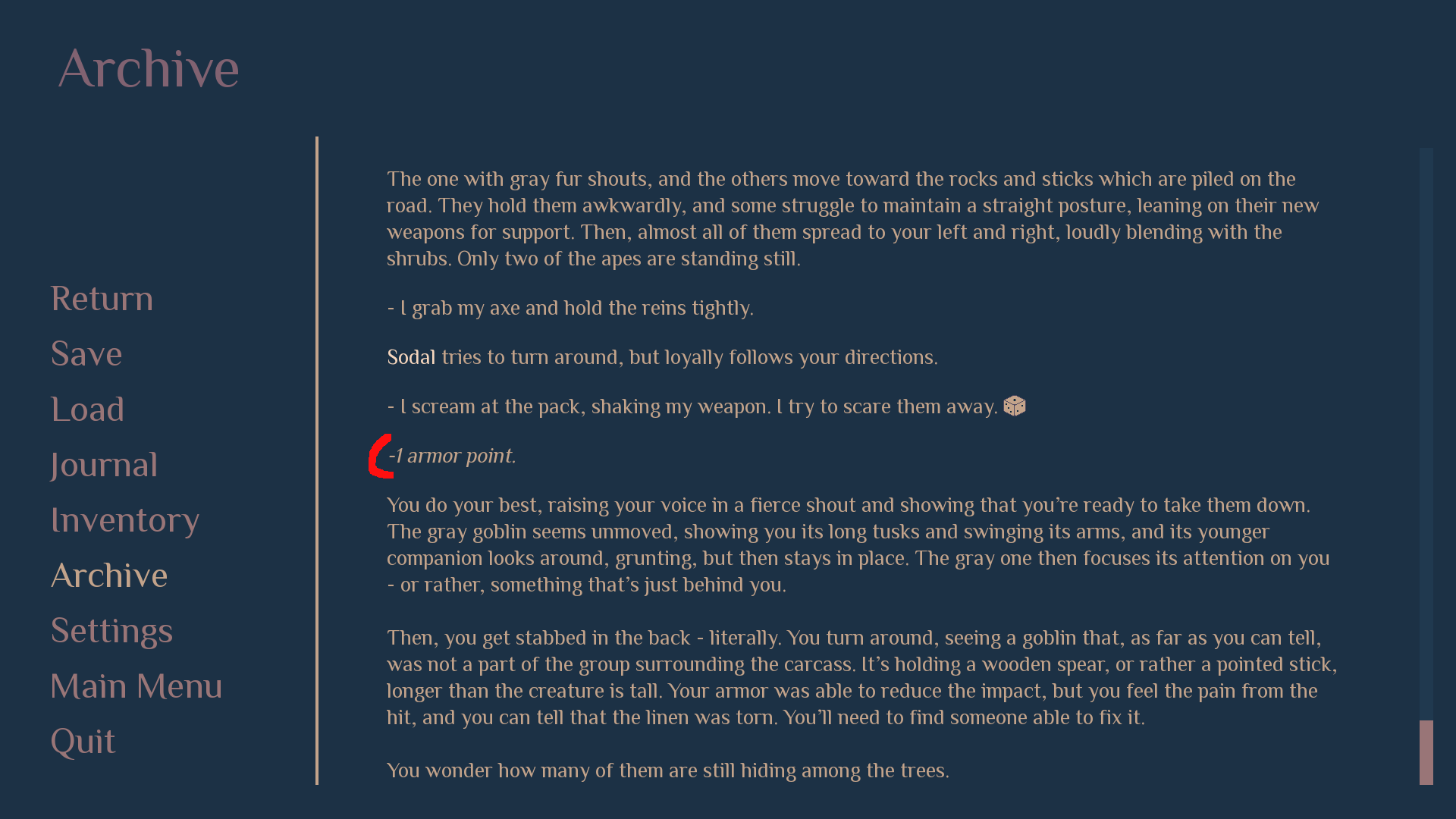 The game’s Credits are now prettier: 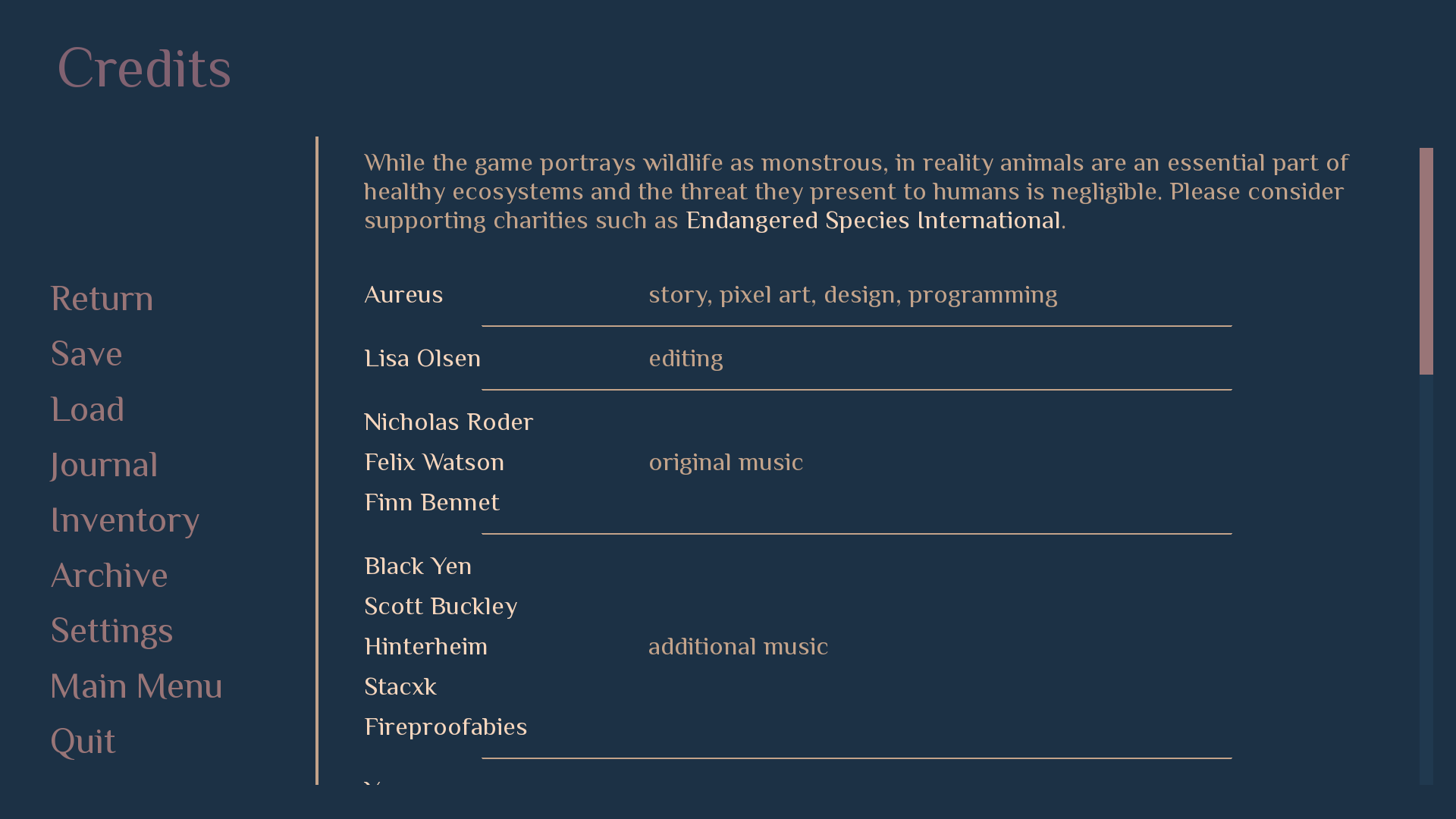 I’ve learned how to use the custom saves outside of the player’s view, so the “respawn” options are now bug-free: 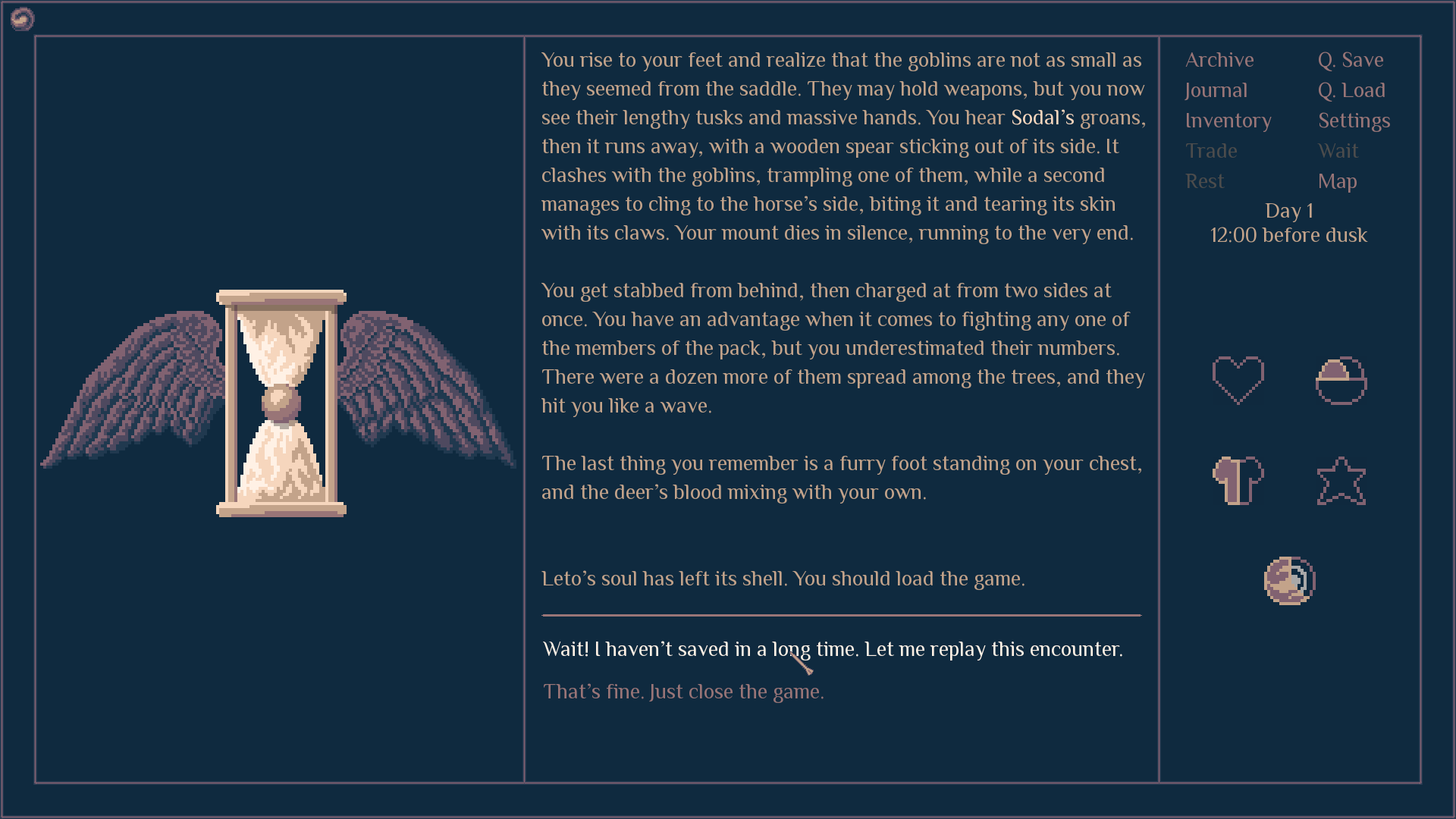 In general, I keep learning how to properly use Ren’Py, so I turn blocks of code into more convenient, automated processes, hopefully making them more reliable.

Thank you for taking a look at this devlog, for your support and kindness. I think it was a good one, even if a bit long. You can also find me on socials, and the game the game has Steam and GOG pages on which you can add it to your wishlist. Have a great day! 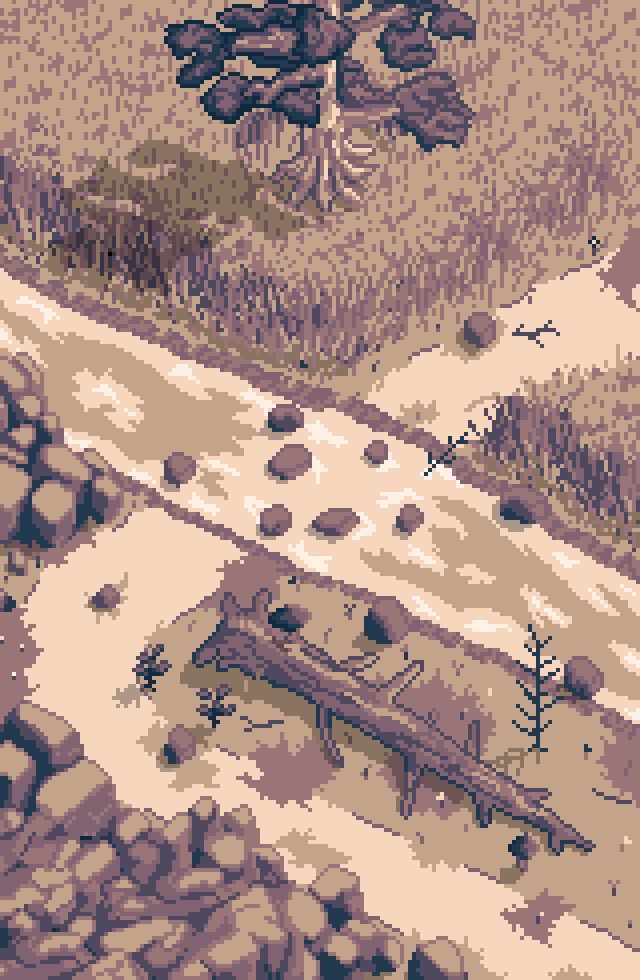