It's been a busy 4 months but I'm very excited to announce the release of Embersol Mercenaries Online v2.0.0. This update concentrated on bringing more MMO type features to the game.

Your own personnel mobile command center. Research new flagship types, turrets, and subsystems. You don't control the flagship directly. Instead you undock a mercenary pilot and then set an AI mode (either Follow, Defend, or Docking). Your flagship won't be easy to take down and will attack and defend itself against enemy ships. Blaster turrets have a high turn rate designed for enemy fighters. Beam weapons have a very slow turn rate but high damage designed for enemy capital ships. It should still be defended as your most important asset as the penalties for it being destroyed are high. Currently, to support a future storyline, your flagship will complete an emergency jump to your last Social Zone if it's health drops to zero. You'll still lose a some resources for repairs and any active pilots. 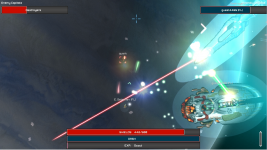 Navigating has been completely reworked. A "Zone" is a dedicated gameplay instance where you can interact with other players. Zones are further broken up into many "Points of Interest" (POI). 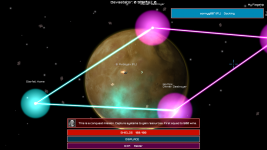 In a Conflict or PVP Zone, these POIs can be captured for your team. In Co-op Zones, they will be randomly generated and may contain enemy AI drones and resources. There's also Social Zones where combat is not permitted but will be the only places where you can purchase new flagships, upgrades, and hire pilots. Travelling to different zones is done by activating your flagship's FTL drive. 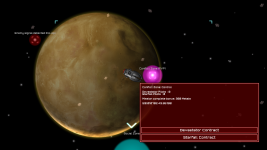 A Flagship in FTL mode travelling to a Conflict Zone

Mercenary Pilots have stayed mostly the same as before. They're hired at Social Zones and will be your main assets in taking out enemy fighters/frigates and destroying asteroids for resources. They'll still gain experience and new levels which will unlock more powerful weapons and ships to purchase. 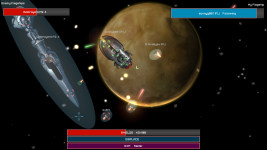 Merc pilot in combat with an enemy frigate

In previous versions, the menu and in-game components were two completely separate systems. They've now been combined so as soon as you start the game you'll be warped into your current starting zone. The menu can be brought down by pressing the ESC or BACK keys. 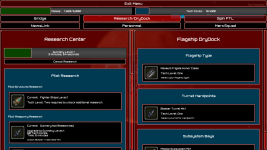 Before being able to purchase new ships or weapons you'll have to research them first. Research is done using Tech Cores dropped from defeated players and drones. New research is unlocked by advancing to higher Tech Levels. The first Tech Level is unlocked in game and I'm planning on setting up the second and third levels up with the next update.

Next update will focus on adding a few more MMO features:

If you see any bugs or have feedback let me know. A lot of the updates done were based on player feedback that I've received over the last few months.

I wouldn't call it a 2.0 since there's barely any content inside. Please, keep working on it.