Starting this week Dissident Logic presents an in-depth look at the characters that make up the world of Paperbound. From the conceptual designs, sketches, weapons creation and the final product, we hope to get you up close and personal with some of our wacky combatants!

Hi, I'm Mike Smith, the character designer for the upcoming brawler Paperbound. We'll be showing you the wide variety of spunky characters that inhabit the world of Paperbound over the next few weeks! First out of the gate is our main character, Eddy. Eddy was the foundational character for the entire game, and also the most intimidating to create. You can see his final in-game version below. It looks simple and straight forward, but it certainly didn't start out that way. 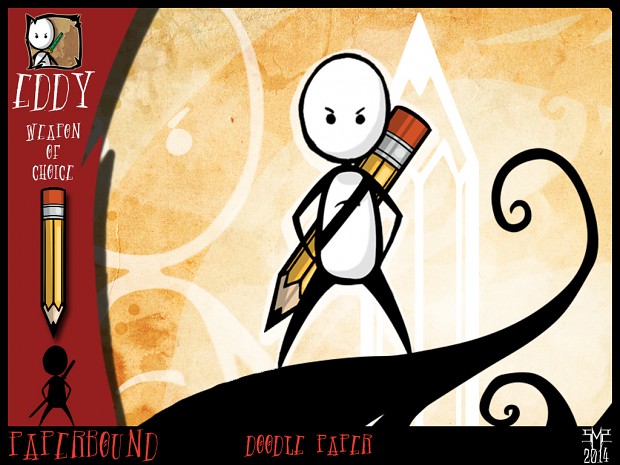 In the beginning, it was a challenge to come up with an interesting stick figure design. How many stick figures have you drawn or scribbled across your papers at school? Or doodled while you were bored? My guess is many of us have sketched them out by the hundreds. So how could Eddy be any different?

That was the challenge.

I think, for the most part, Eddy does have a sense of style to him, and we managed to keep him from ending up just like every other stick figure. I approached him with the idea of keeping him slightly asymmetrical, as if drawn by a young boy, yet still maintaining a sense of aggression. Below, you can get an idea of his progression, and various outfits (including an 18th century wig) that I placed him in to get a feel for the character. Not all of these are accessible in-game, however, it helps set the mood when finding his personality. I could fill pages of all the different outfits, sizes and shapes we put our main character through. At one point, he was two times his current size, with all the necessary joints for articulation, with a more "super hero" physique. It was fun to explore those avenues for a bit, but it ultimately came down to simplicity. Though I have to admit...I love his space suit. 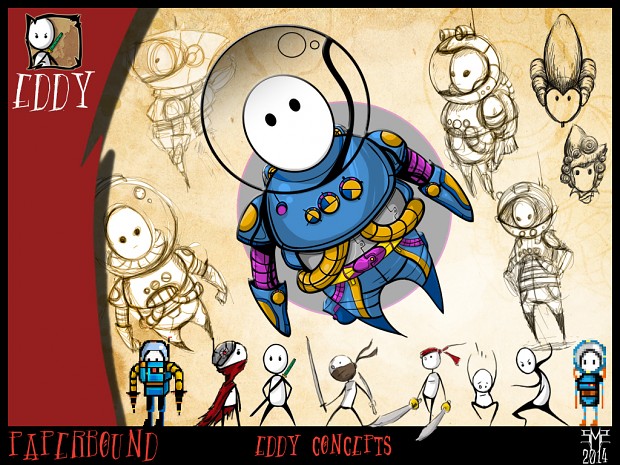 And yes...we explored 18th century wigs. But that's another story...

Our last section deals with Eddy's choice of weapons. The dreaded 2B Pencil. This actually turned out to be a last minute addition, and in hindsight, should have been the main choice all along. Before the pencil came into play, Eddy was sporting a katana blade (now in the hands of his alter ego, NinjEddy) and though that seemed appropriate, and deadly, the 2B Pencil idea just hit home and seemed like a natural fit. The image below shows its development, through the use of various software programs, ranging from Sketchbook Pro, Adobe Illustrator, and finally Adobe Photoshop. 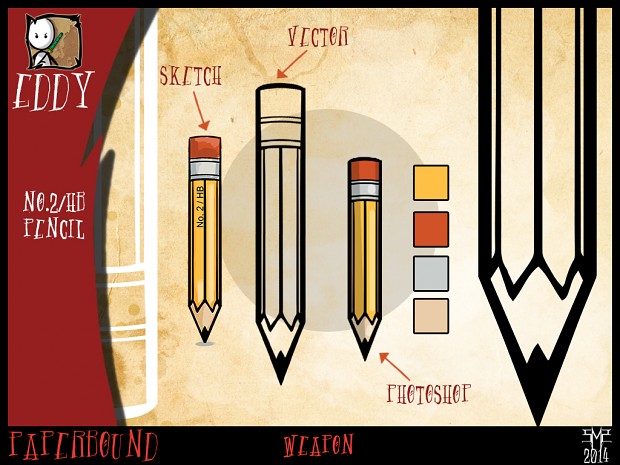 So that's it for this week. Thanks for taking the time to check out our game, and see a little more into the process of bringing these characters to life. Be sure to check back next week as we highlight our next character to enter the arena.