Theodred's concept has been reworked, such that he became the new Siege Hero of Rohan.

Edain Mod 4.5 The Prince of Rohan

Today we want to present some changes we made to one of Rohan's heroes:

Théodred is a hero who has undergone many changes in the history of Edain, as a matter of fact his concept has been reworked in every major version.
Théodred has a hard time finding a place in Rohan, as almost all roles are filled by other heroes. That is why Théodred was conceived as a hero used in defensive play styles and for building support, just the same way he defended the ford of Isen during the War of the Ring. However, this restricted his utility too much and so he gained the ability to summon a unique building, which made him a hero with a high defensive potential, but he also had Rohan's typical mobility. In addition, the tower made it possible to better integrate the troops of Westfold into the Rohan faction.

The tower Théodred created was unique concept for Rohan, but it was never put to a defensive use, as it was usually more worthwhile to summon it near the battle rather than near your own buildings. This was not only bad for Rohan's play style, but was extremely frustrating for the opponent. With the introduction of the Captains of Rohan, the tower also lost its unique relation with the Westfold.

Basically, we are very satisfied with Théodred in term of his uniqueness, but we are not happy with the way he is integrated into Rohan, and desire to better define his role in the faction.

Looking at Théodred currently, his design and integration can seem offensive in comparison to Tolkien’s character. After all, Théodred and Eomer were the greatest obstacles in the conquest of Rohan by their action with which they opposed Saruman actively. Theodred did not wait for the arrival of Saruman's army at the ford of Isen, but instead marched out to strike the enemy before they were ready for battle. Not only did he defeat the vanguard of the enemy’s army, but he also razed the fortifications that had been built before he was forced to retreat. 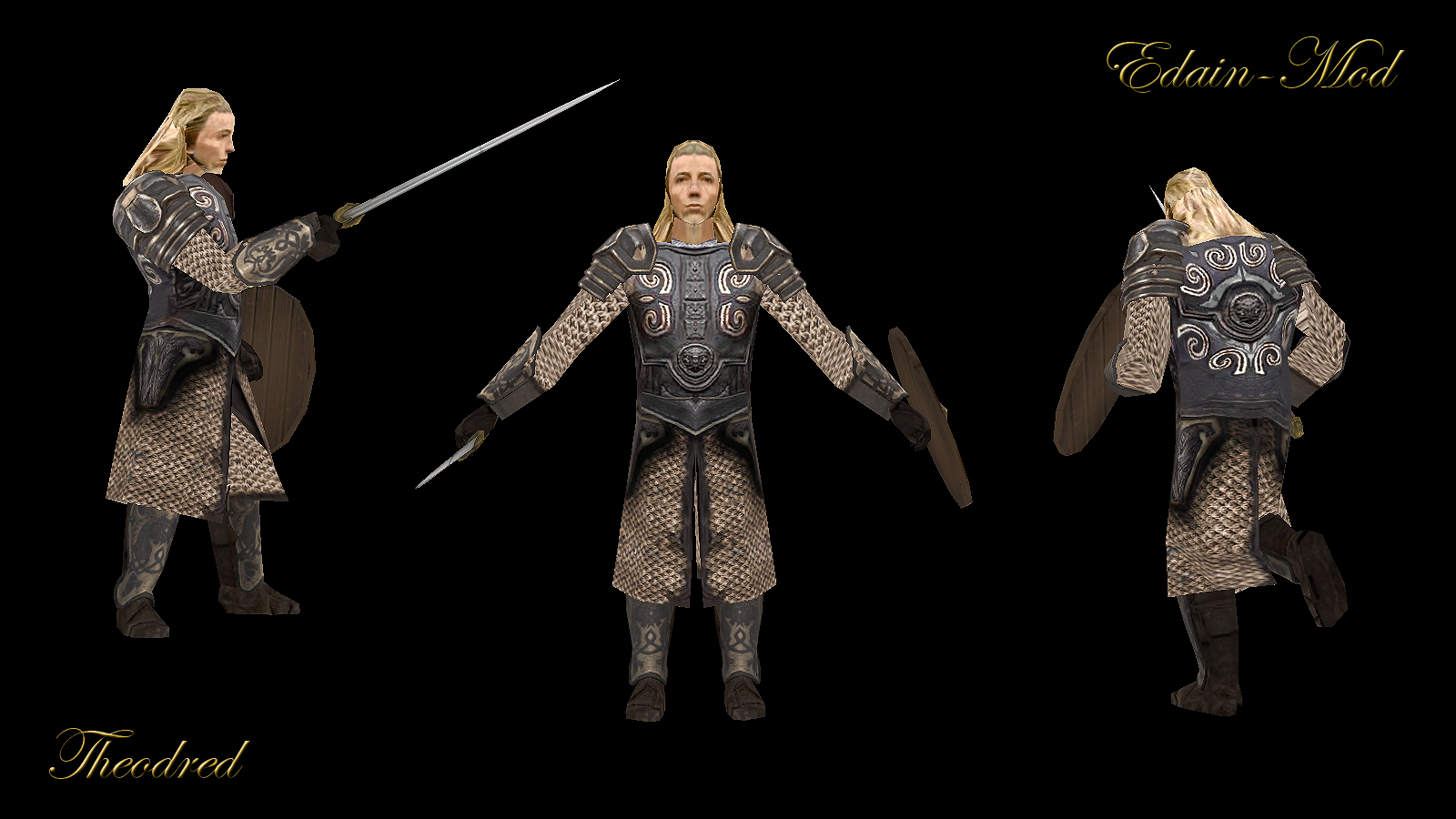 Théodred's concept will continue to be centered on his tower and most of his abilities will remain fundamentally similar. However, Théodred will assume the role of Rohan’s siege hero in the future.

Théodred, like in the previous versions of the mod, has 3 unique stances, with different effects that reinforce him in his role as a siege hero. With the axe, he deals more damage to buildings, but is also protected by his shield against arrows fired from buildings when he has to retreat.

Théodred's old defensive post has now become a point of attack. It sends out an attack team of five warriors of the Westfold, who can be sent to attack enemy buildings. The attack team causes greatly reduced damage to everything apart from buildings and is controlled by the attack commands of the tower. It also has a limited range, so buildings cannot be attacked from the other side of the map. If a member of the attack team dies, it is replaced by the Attack Post, so it is important for Théodred to protect his Attack Point as they provide an endless supply of light siege units. 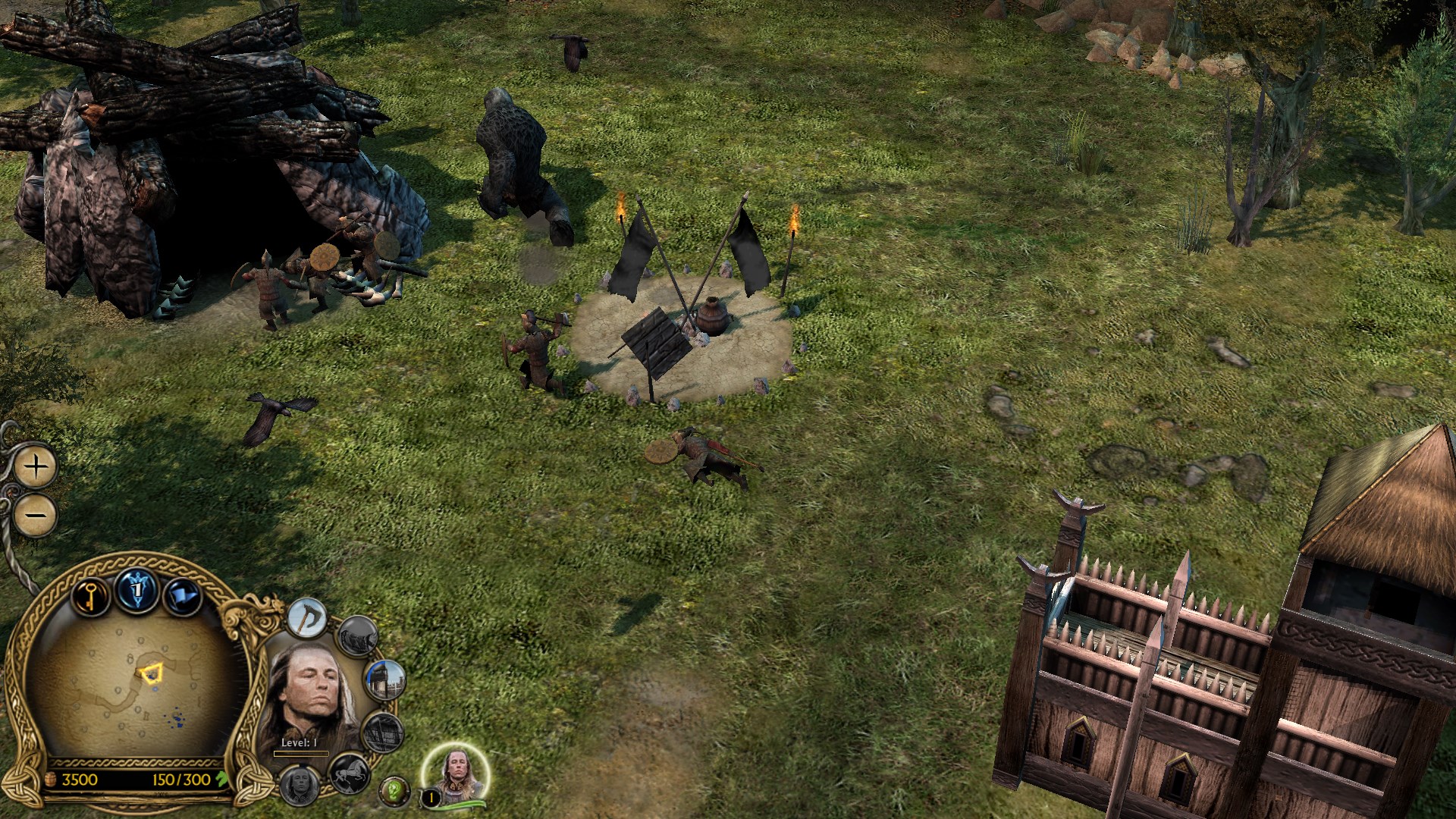 The attack point offers Rohan the opportunity to exert pressure on enemy buildings early in the game, but due to their low unit damage it is not impossible for the enemy to deal with it.

Through the siege garrison, Rohan is given the opportunity to build two of its siege units at the attack point, which can increase the pressure on the enemy and also allow for unexpected attacks by the Rohan player.

If an attack point is upgraded with repair work, it offers Rohan the possibility to attack the enemy even more effectively. Catapults are better protected against enemy attacks and are repaired.

- Level 10 - Defense of the Riddermark Théodred mobilizes all forces to throw back the enemy. For 30 seconds he and nearby siege engines gain +50% damage, +20% movement speed and cannot be knocked down.

One of Rohan's strengths is its speed. That is why Théodred allows sieges, with his level 10 ability, to reach the enemy faster.

We are very pleased with the new concept of Théodred as it reflects his aggressive and yet stationary character very well, making him a useful and unique siege hero for Rohan.
We hope you enjoyed the update on Théodred and look forward to your feedback.

This is a bit of a disservice to Theodred's character in the books. Erkenbrand would be a better fit for this hero imo because he's the Lord of the Westfold/Helms Deep.

We know nothing about him at all and so he his abilities have to accommodate other heroes, who we do know stuff about.

I agree, this would be a much better concept for Erkenbrand. I also think this just puts more of an emphasis on foot soldiers for Rohan when it should be on the horsemen.

It's like the news said: "Théodred has a hard time finding a place in Rohan, as almost all roles are filled by other heroes."

I hope this means the Dains will be overhauled.
Great concept for Theodred, it looks to be really fun!

Thanks for the news, guys!

It's always a pleasure seeing your love for detail and the ongoing revisions of long accomplished concepts.

Great work, I can not wait until I can play with him.

Very nice! looking forward to try him out.

Nice! Can we expect more hero-changes for 4.5? Ballance changes for Thorin and Haldir for example?

Love your work and looking forward to upcoming patch!

No bigger concept changes, but there will be balance changes of course in 4.5.

So the "Attack Point" wont fire arrows on enemies anymore?

Bloody hell an update! great to see you guys are still working on what I expect will be an EPIC 4.5

i love these changes, but i wouldnt mind another ability between lvl 6 and 10 it just seems a long time without a "power spike"

I'm always glad to hear from you, dear Crag. Overhauls concerning heroes (or other very conceptual topics) bring often significant changes in the game. May additional heroes be granted some new interesting features in the future too ;)

There is certainly plenty of concepts in the forum to consider.

I can only say that I am sad because of my free time, it is almost reduced to minutes on moddb or modding union. I hope to read&support and discuss about those features in near future. Until then, I really hope for the best changes this mod can implement.
I also hope eleven queen will get some "bit of cake". :)

Indeed! That's a cake we have been working on and constantly perfecting for long time :P

I shall keep on waiting for the moment when you manage to be more active on the forums, among your real-life obligations. You're nonetheless always welcome here. Saluti anche a te ;)

The new stances is a welcome addition. but i greatly dislike his new siege-centered abilities. Rohan are always good with raiding building due to their affinity with cavalry with low base defense capability. Now you dismantled Rohan's sole defensive option and turn him into an even more effective siege commander which makes Rohan = godly building raid and absolute zero defense.

I think you guys worked out a great concept for Theodred, though I do not believe it's very realistic since Rohan does not seem a Race to me which has much ado with siege and destroying enemy buildings. I do however understand to have something siege-related for the game to work properly and balances and all.
So: well done!

One extra question: do you have any idea when you might release 4.5? Do you have a lot of other changes planned?

great work guys. is there a campaign with the Edain mod? is there is, which mod can I download to play the campaign? thanks in advance

Nothing official about a hypothetical Edain campaign has been revealed yet. The only advice I could give you is to wait for the release of the last planned faction and to follow the progress of the Mod (announcements and news). Only in this way will you be able to remain informed, until you find what you are seeking for.

Awsome with a new article Edain team! Are you guys planning on giving us similar articles for a regular basis of the upcoming changes for 4.5 on the road to the new patch?

I don't think it could be possible to guarantee a fixed regularity of time or to determine the content each article is to showcase in advance. There is nonetheless another major theme of the patch which is yet to be presented to the Edain Community. Therefore, yes, additional articles are likely to be published in the near future; only, don't expect many more precise indications to be anticipated, until the actual publication.

He can still mount his horse, right? It shows it in the screenshot but is not mentioned as a level 1 ability in the article.