The Edain 4.1 Demo featuring a return to the classic Battle for Middle-earth castle gameplay with Gondor, Rohan, Mordor, Isengard and Dwarves is now available for download - fully in English!

Today, Patch 4.1 for the Demo of Version 4.0 has been published. You can download it directly with the launcher, just use the update function. 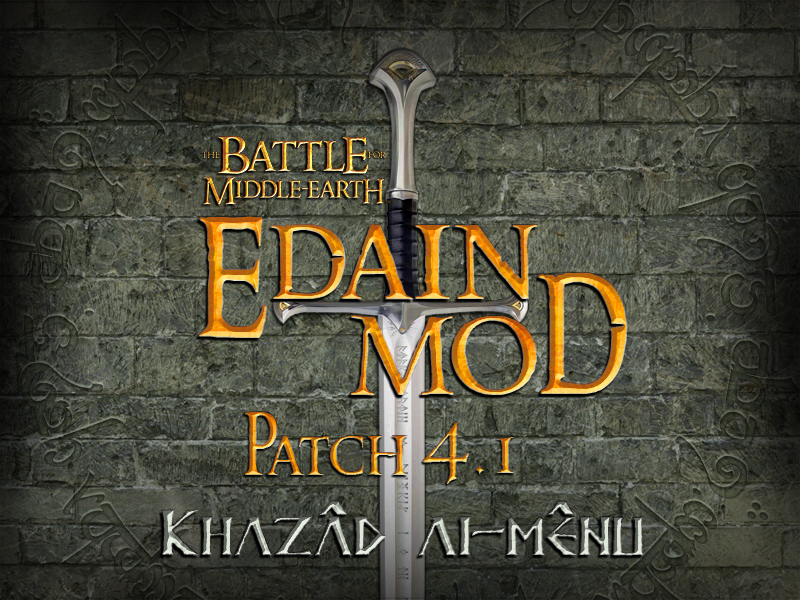 If you have any problems, as usual, visit our Support-Forum!

This update adds the Dwarves as a new playable faction. Build an impressive dwarven bastion, go into battle with Erebor, the Iron Hills or Ered Luin, and ally with the Men of Dale and Lake-town. Nearly all units got new abilities and at the head legendary heroes as Gimli, Thorin Oakenshield or Dain Ironfoot are fighting. Additionally, we eliminated many errors and improved and further developed the gameplay of Version 4.0. In particular, the War of the Ring has been continuously improved, so that the AI does not surrender easily and is able to use outposts and new buildings much more reliable. 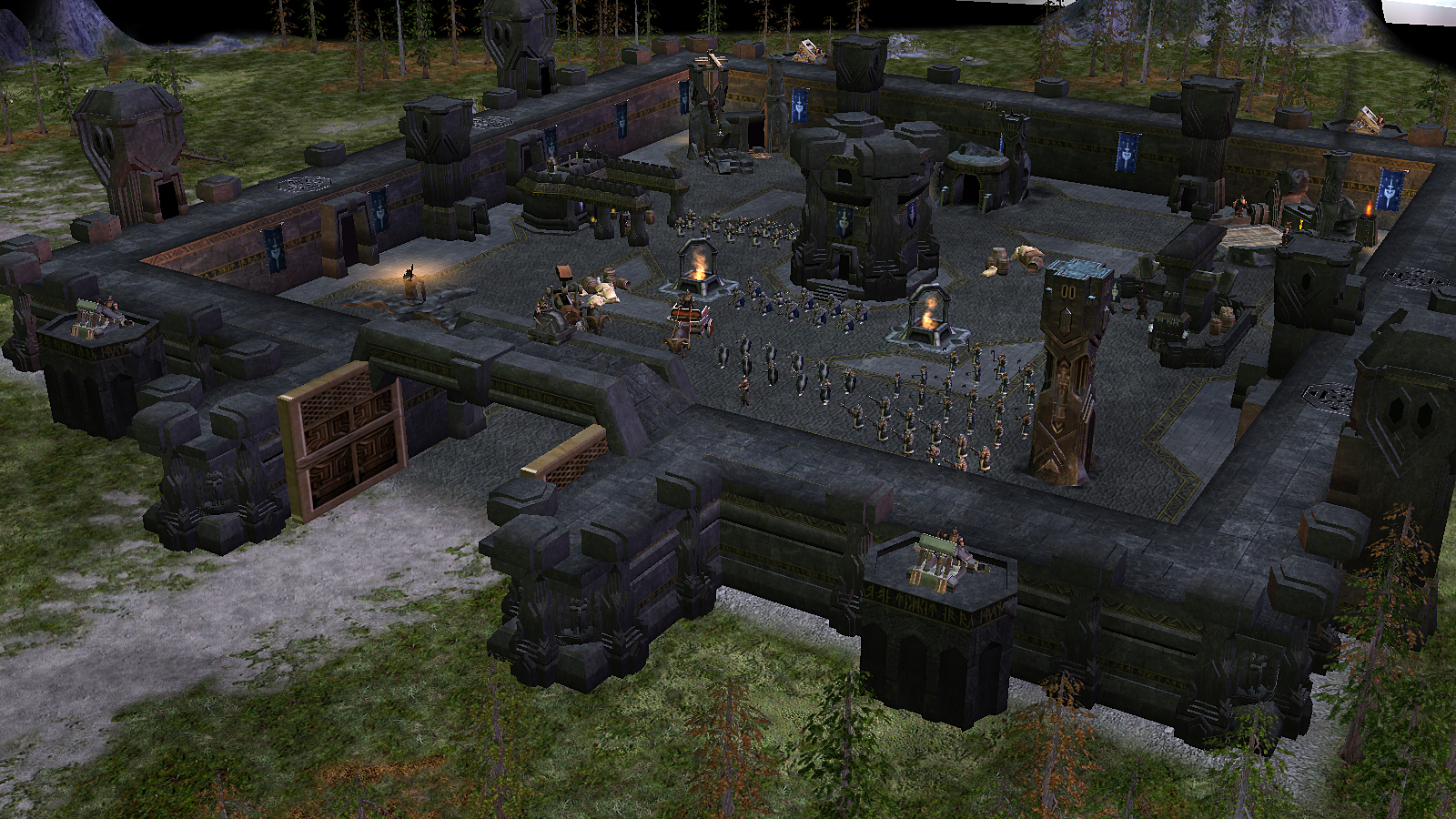 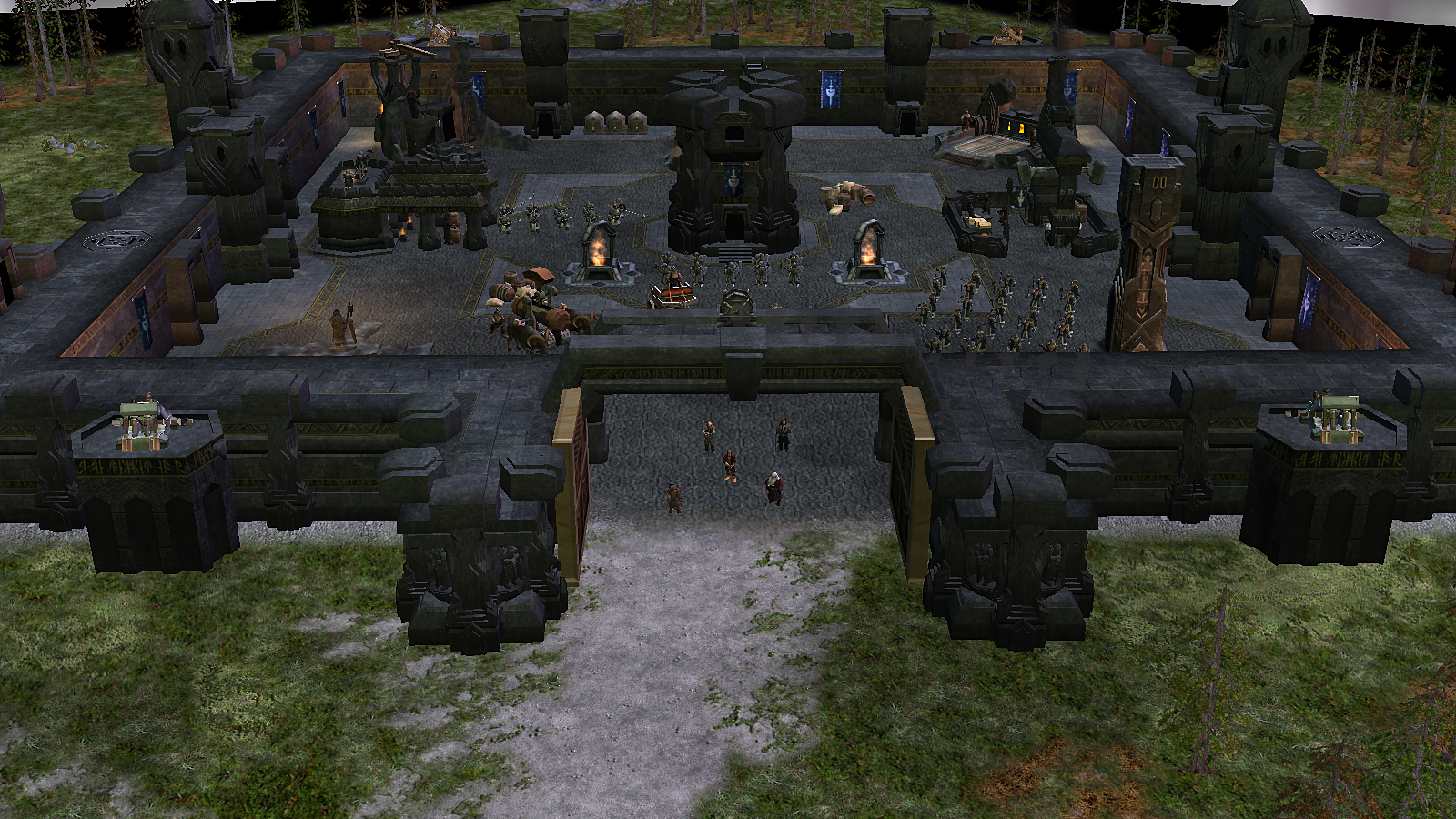 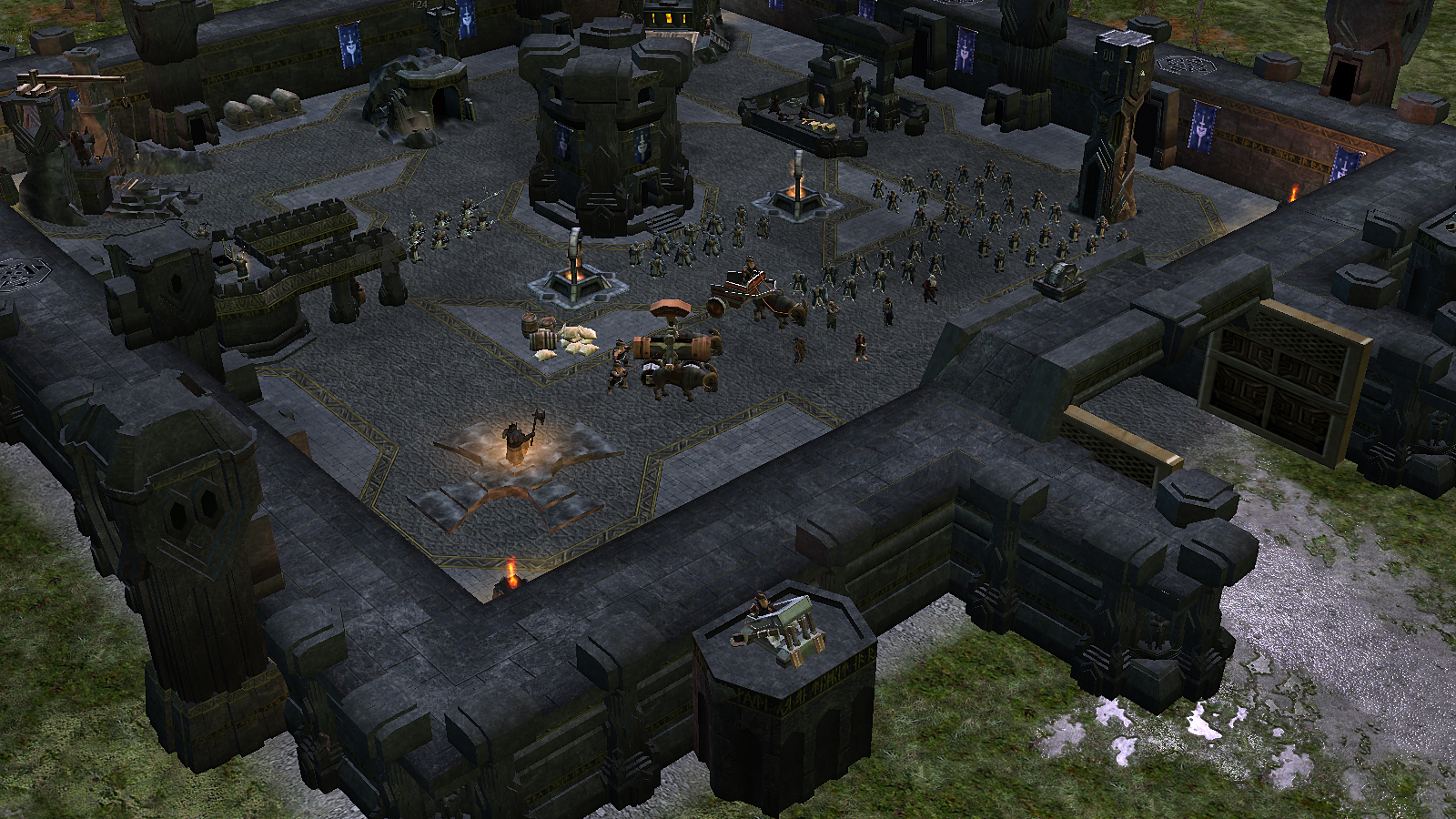 - The system of Fearlessness has been reworked. Banner carriers offer no longer resistance to fear for nearby troops. Instead, it is implemented through the following systems:

- Mordor-Orcs got an unique active ability, when they are commanded by an Overseer. The basic idea was that the overseers of Mordor replace the function of upgrades, so that they increase the effectiveness of Orcs against special targets:

- Many designs and elements of the Hobbit movies have been included, for example Dain Ironfoot, Thorin Oakenshield, Dwalin, King Brand or the Men of Lake-town: 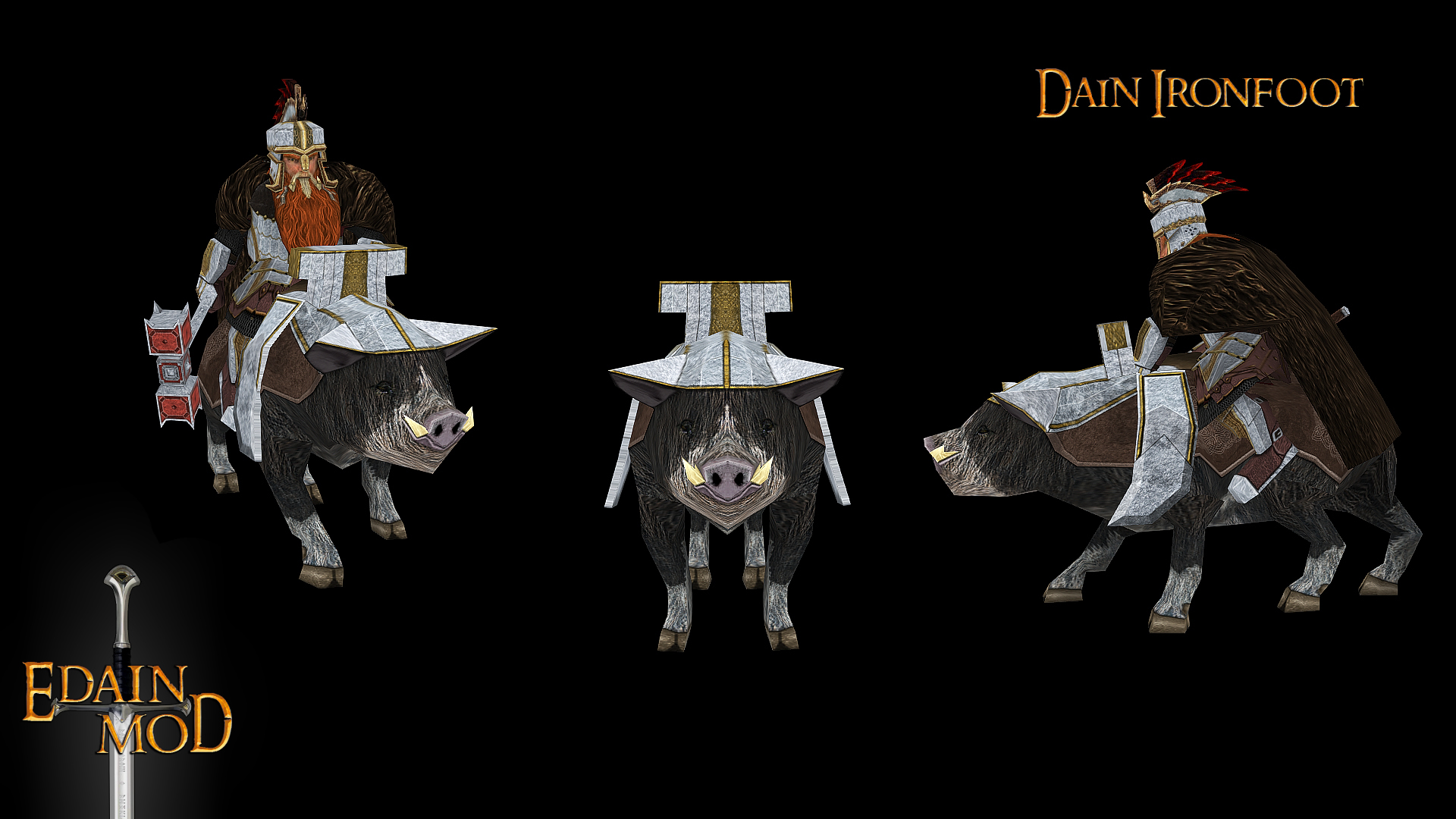 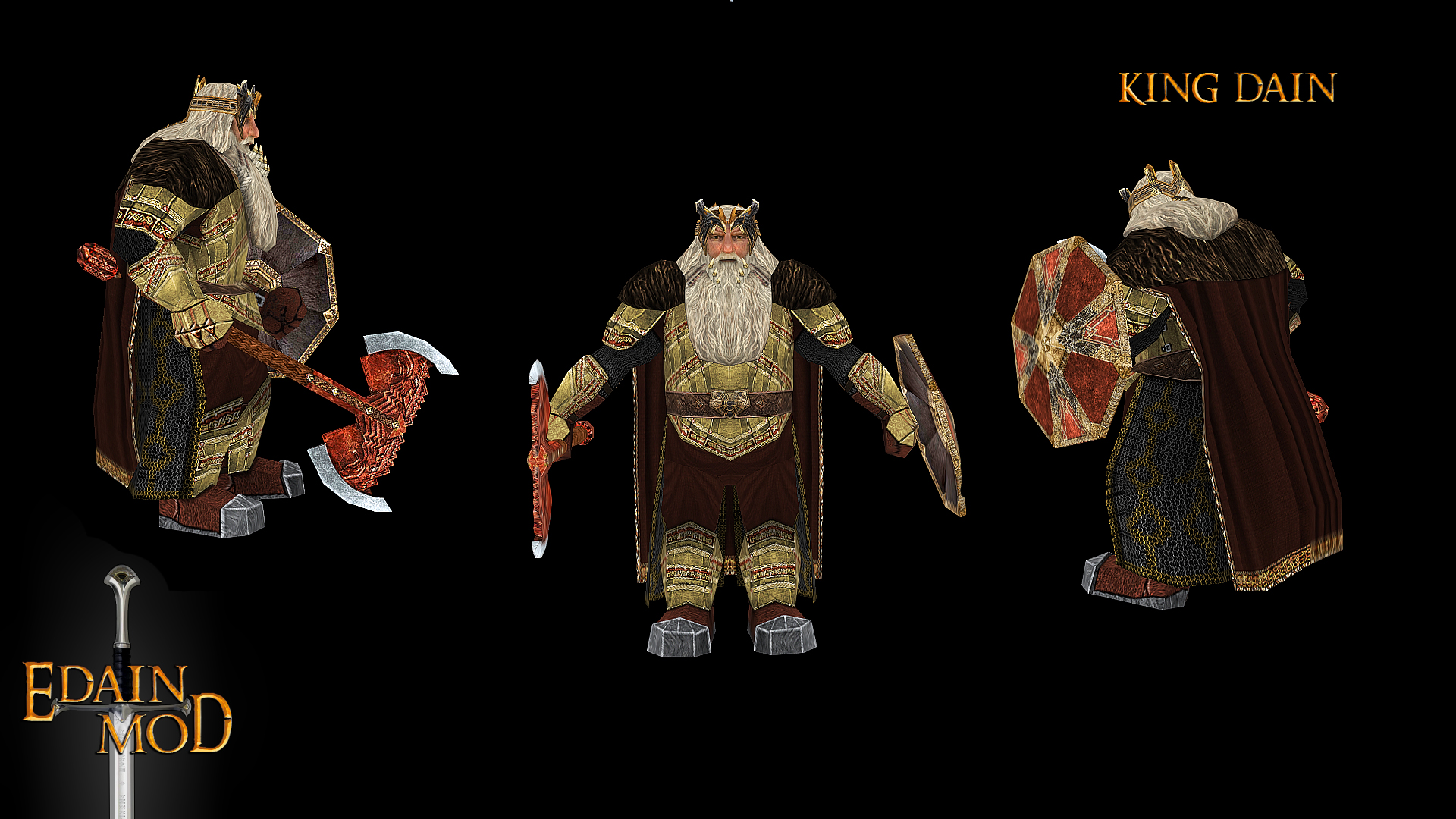 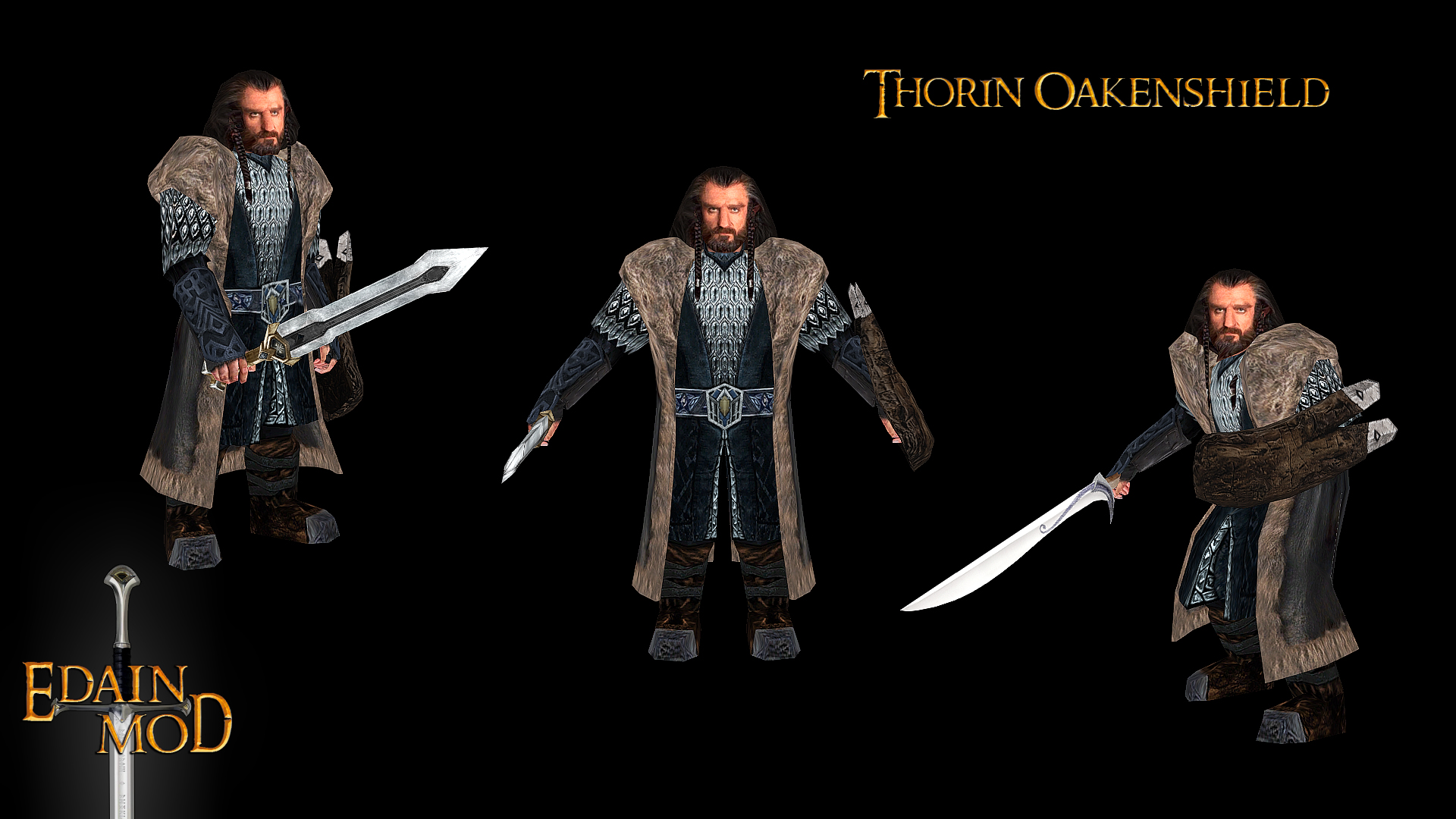 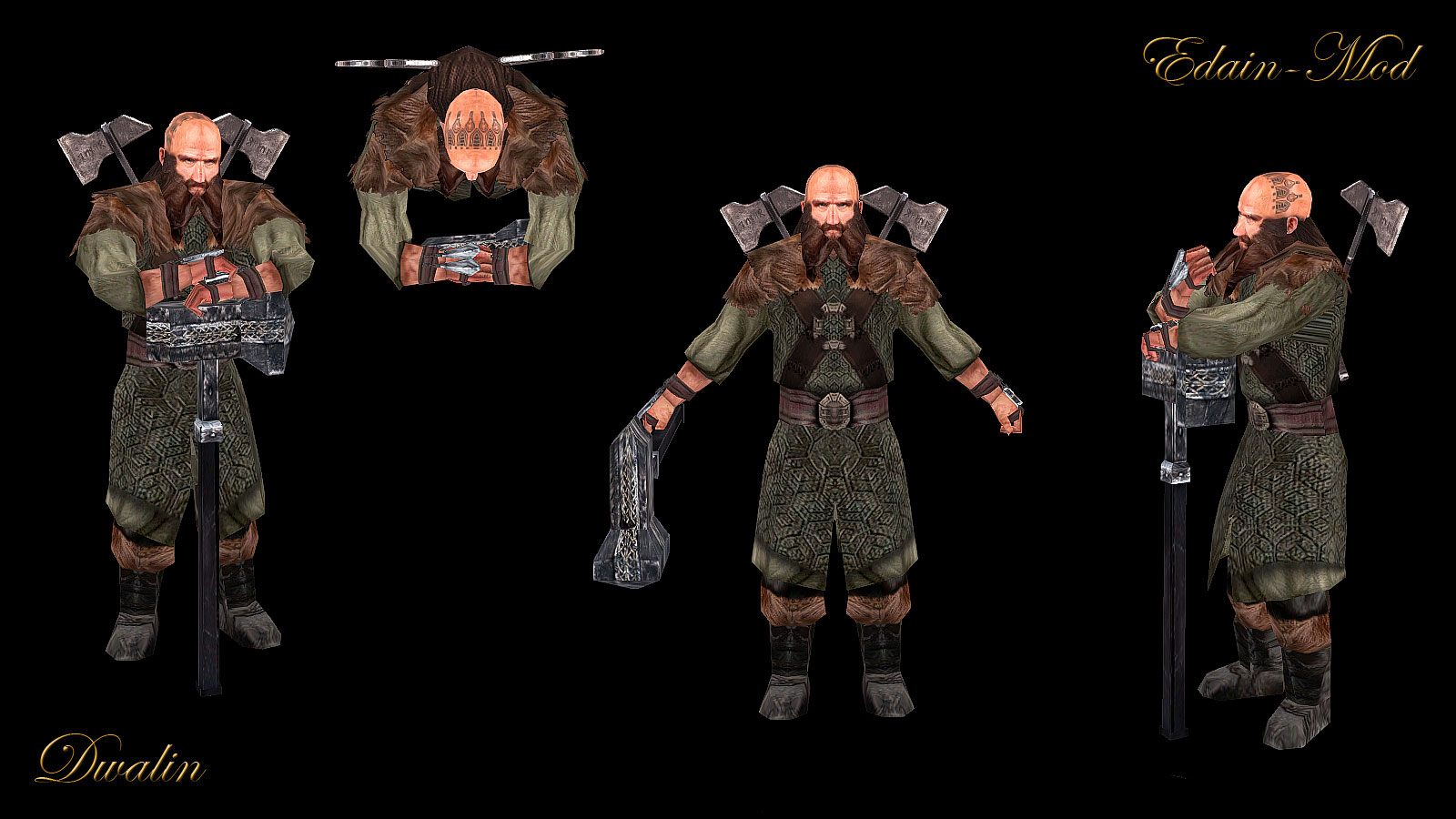 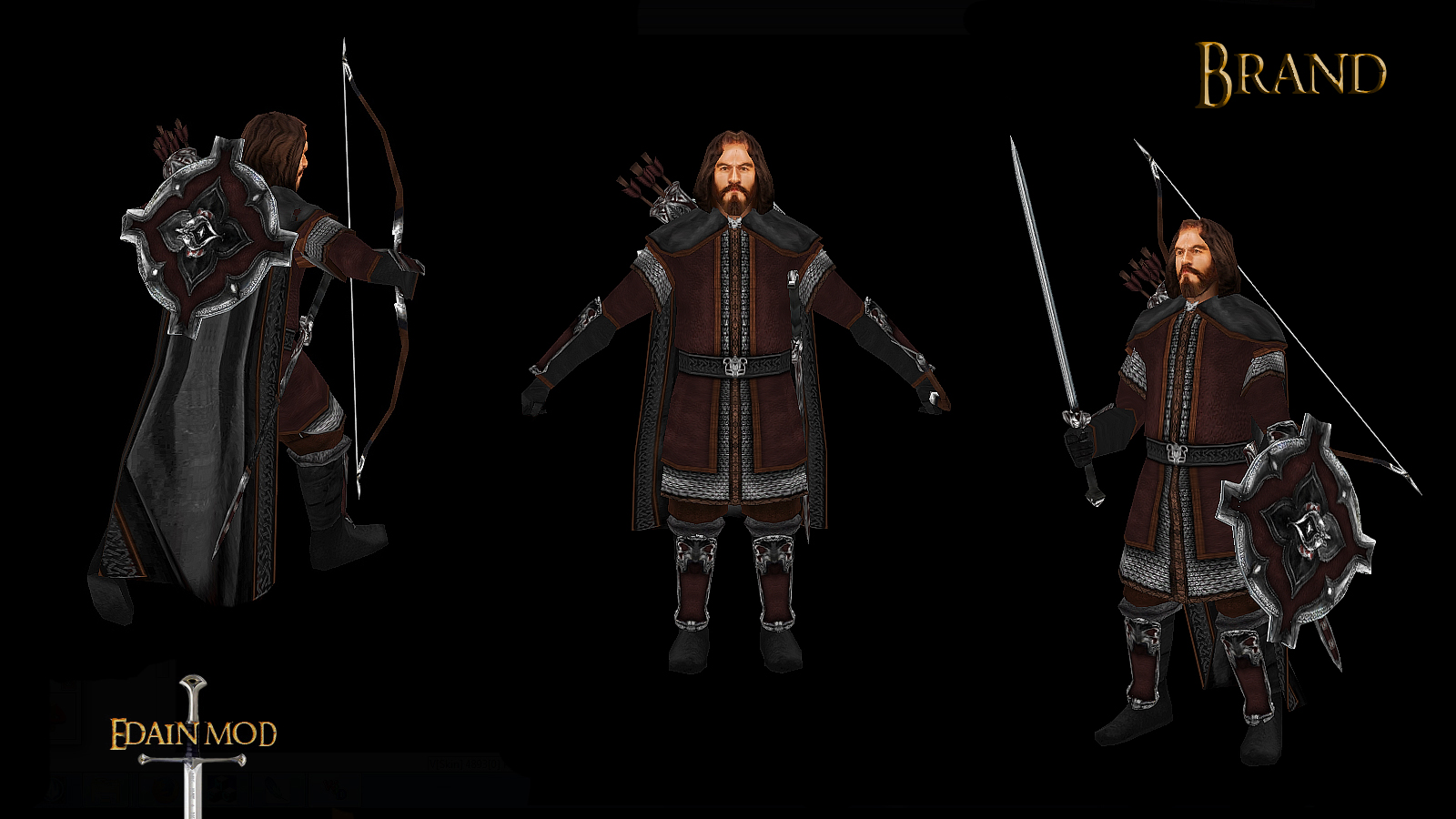 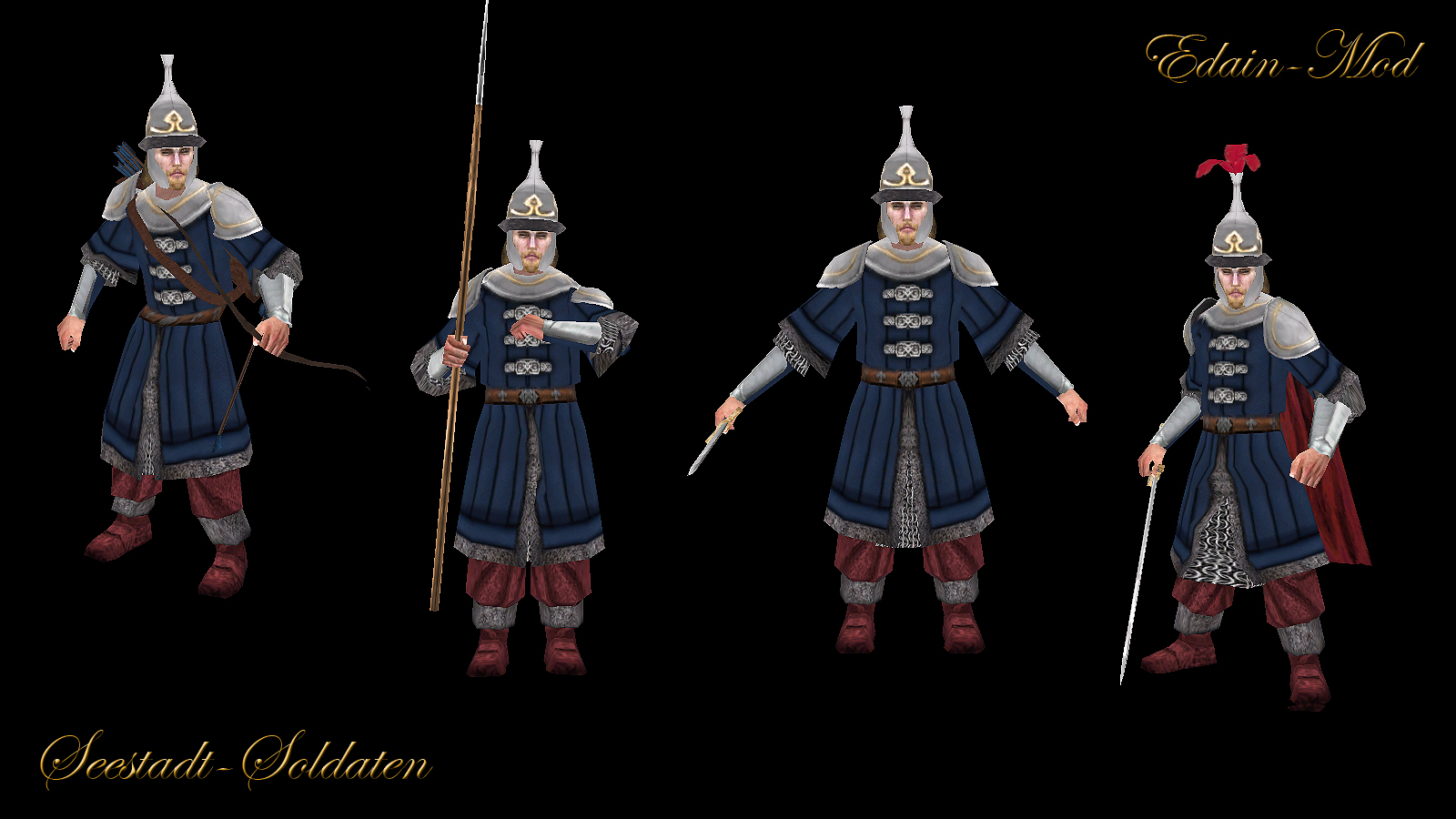 Further information have been presented in our updates:

Also there are many balance changes:

We hope you will enjoy playing!

Now I have a reason to ask my boss to take summer vacation ;)

Oh I'm sure he won't argue your reason^^

i have to update from the launcher or download it again?

You must download Edain 4.0 DEMO
Moddb.com
then upgrade normally launcher.

Well, then you changed something or some files were wrong in your initial download. Download should be ~200 MB.

Is it normal that I can't upgrade de hall of warriors? I mean, even tho I spam units it won't level up. Can you help me?

Incredible work!Dain's new desgins are perfect although I kinda hoped that Dain will have Armor similar to Raven Armor of Thror as King of Erebor but still he has perfect design!!The only think that saddens me deaply is that the Team wont use the AUJ and BoTFA Dwarven Designs for Erebor and Iron Hills Armies I will always regret it!But none of the less another awesome work as always Edain never fails to deliver a masterpeice! :)

How can? Is there any alien in Edain team ???

ered luin is my favorite! xD

the heroes are stronger

Dwarves are simply amazing, but..there is always a but. I was hoping that with all these changes we will have the chance to recruit king Thror or Threin. I think they are just as important as any other hero. Although their appearance in the movie was small they fought their battles.

And I've never really understood why people demand Thrain and Thror that much. There weren't much about them in the books nor in the movies anyway.
I find Dain and Thorin to be much more interesting characters, and quite more awesome.

Well I too like them a lot especially Thror and even more after I saw how he was portrated in the Movie,cool and noble heir of Durin and I lvoed him even though he didnt have a single replic :D But still I understand Edain Team point and have no problem with it! :)

We need the pikemen from the movie with a charge that can knock down enemies like the movie. With the same armor

I'm sorry but there's something I don't understand. Will there be released a full version with all the factions in the future in a single version? Or if I want to reinstall the mod from the beginning I'll have to download every single patch update?

Well downloading is downloading either ways. The parts you don't download directly in the package, you will download via the update.
In general the update will always be around the same size (~200MB) so in a sense you're not downloading any extra files, but just replacing what's already present in the mod with a more updated files.

Since the patches always include the previous one only one patch is downloaded.

There will propably new setup versions in between as soon as I find time to make them. :P This is simply because so that people do not need to download the demo at first and then download a big update.

But at the moment you need to download the demo, search for updates and install the update. Its always the newest one.

Hello ! Thanks for the incredible work, I despited dwarves for long but this mod made me reconsider it =) I do have lots of graphic bugs (for example invisible Dain and pink buttons for some upgrades) even after unistalling, redownloading and reinstalling the mod. I have a legal version of the game with RotWK bought on Origin, though it's a French version. Any advise ? I had no problem with Edain 3.8 but only with 4.0 . Texts are also missing but I will reinstall the game in english as suggested in the forum. Anyway, it's a great work even with my bugged version, and I enjoy playing it ;)

Well I bought it in January 2010, it's been a while. I just reinstalled it in english, missing texts are fixed but I still have the same graphic issues. I'll try to report all bugs and make a complete list of it. But once again, most of the game is playable, so it's not such a problem. Maybe it will be corrected with the next patches.

Ah, yes I remember. It was available via EA download manager and shortly after that via Origin. Could be that the origin installer is working differently and not writing the same registry keys as the original one. But you have BFME 2 installed right? Did you check for updates with the launcher? Corrupted mod files should be found and can be replaced through this.

BFME 2 is installed with a classic CD version and I downloaded 4.1 with the launcher so I have the fresh new update, none is found anymore. Maybe the problem does come from an Origin version of RotWK.
By the way, thank you very much for trying to find an answer, it's nice of you. After all, Rohan is ok in my game and that's all I really need. Just waiting for the misty mountains swarms of goblins and it will be perfect =)

In the next update will Dain have his Movie voice!? :)

If someone will cut it.

I see!I may try to do it!But I do not know what program you ussually use or it doesnt matter!?

If want to try, just try to cut in mp3 using whatever you feel like. It can all be converted afterwards if needed.

If you do Dain's voice upgrade in next update, maybe it will be nice to upgrade sound effect of Dain's "Baruk Khazad" ability with dwarven battle cry from movie, of course if someone do that cut in the meantime.

I love the patch, I am glad Isengard got nerfed. I am still bummed about troll haven't really been buff by the patch, still making them less reliable than Orc Rush. But still, I love the patch, the Dwarves at an interesting new twist to the game. I hope to see Misty Mountains in the next big patch.

Dwarves are doing fine I love their playing style!The only thing I can't get used to is having this cool Lord Dain and King Dain with those awesome Movie based Armors next to the old Edain 3.8.1. Dwarven Units! :(

I will now count how many times you demand the movie-dwarves. ;)

Actually there are few of us not only me,but do not worry I will stop I understood when a couse is lost!So thanks for the great mod and keep the good work!
P.S. I do not make DEMANDS only suggestion backe up with reason why it will be good and fiting thats all,but if you see it as a demand there is nothing I can do! ;)

I too would like to see the movie Dwarves

I don't think it is a good idea to give Dain back his old look. Personally, I really like his new design.

Beorn's powers and descriptions are not in English. Other than that awesome work so far

And Beorn's voice is on German in eng version. It will be nice if someone with experience prepare sound cut for next patch.