A summary of our first month in Early Access, a preview of our current work and an overview of what's next for the project.

Posted by TheManWhoFlewAway on Mar 11th, 2017

It's been a busy few months following our rebranding of Observatorium as Echo Lake and our launch via Steam (PC) Early Access on 27th January. For our first development article of 2017, we'd like to discuss our first month in Early Access, changes made to the game so far and where we're headed with the project.

We have 2 main reasons for bringing Echo Lake to Early Access:

Public showcases have been very helpful so far - and we are likely to keep doing them - but when people are playing our game in a busy setting for just 10-20 minutes we tend to get a very specific kind of feedback.

With Early Access, we were able to ask players to part with some money whilst enabling them to take their time with our game in a more natural setting. This permitted us access to a whole new range of feedback.

We spent most of the first month addressing immediate bugs or additions which added instant value to the game. This included the restoration of the control configuration dialog and various puzzle/layout fixes: such as tackling numerous easy-to-reproduce puzzle bugs, fixing multiple friend fish issues, preventing certain undesirable sketch states and so forth. The link below details all of our patches applied so far:

Behind the scenes, our animator/composer - Peter Satera - has been working to update our character animations/artwork to use our new lighting model. Whilst not immediately beneficial, this paves the way for upcoming work relating to new biomes and time-of-day. The image below shows our ship artwork as it now exists in-editor (lighting and shadows are no longer baked-in):

Related to this, the image below shows the ship artwork at run-time before and after the lantern is toggled: 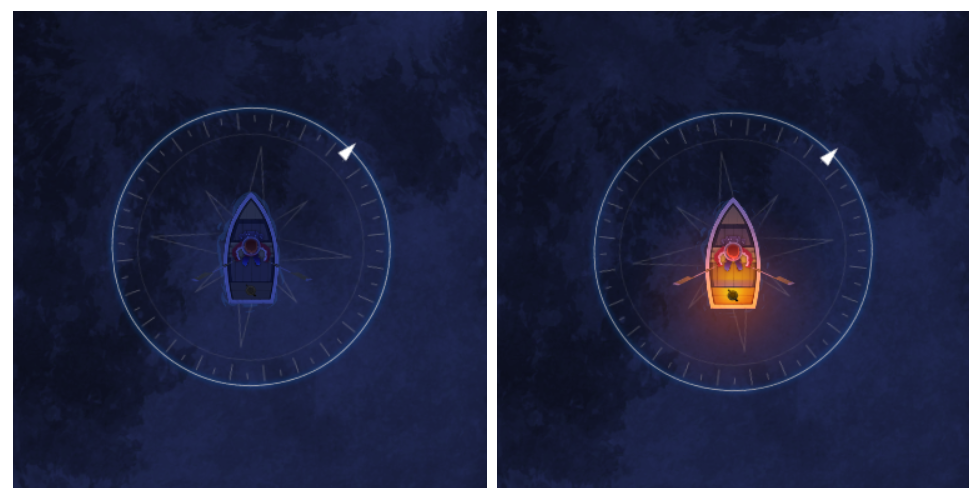 To achieve the above looks, we use a blue ambient light (which acts as our moonlit ambience) and an orange point light (for the lantern); we have controls in code/design to allow us to toggle the ambient colour and lantern colour/intensity which opens up a range of visual possibilities. We have plans to expand and improve the lantern gameplay as we reveal new features later this year.

Following our first month on Early Access, we began collating general and recurring issues. While it's easy to dwell on the negatives, it's important to remind ourselves of good feedback too; the positive items were:

The recurring negative items - ones we're now considering as 'action points' - were:

(4) Some alternative paths are confusing (where they lead to nowhere/nothing)
(5) The HUB area could do with more feedback - e.g. additional readouts

Lately, we've been working to address some of the broad feedback listed above:

To address puzzle issues, we have been considering general improvements to the puzzle gameplay. We certainly agree the game is 'too easy' overall and part of this has come from us constantly refining the basic sketching mechanics to make things easy-to-understand. We added improved sketch support - such as the ability to overwrite stars and merge lines - based on numerous public playtests; we now have the leeway to expand our creation/destruction gameplay further.

Our coder/designer - Clive Lawrence - has begun work on expanding the creation mechanics. Now, instead of the required fish auto-appearing when you interact with a 'creation zone', players must now choose their creation. We also offer additional controls - such as the ability to redirect fleetfins (shown in the left image below); this unlocks a range of new gameplay possibilities:

This gameplay will be patched into upcoming versions (1.1.0 onwards). We also plan to expand the negative puzzle mechanics by means of additional hazards (similar to the spikey fish) and tweaking the behaviour of existing sea-life. We have to take care not to visually overload the player with each puzzle so there will be a lot of ongoing balancing; our mechanics are therefore subject to various revisions.

To address world layout issues, we aim to revise our layouts to better streamline the player into taking the required direction. Some alternative paths that lead to nowhere right now are actually remnants of older level layouts where we had more sub-paths and puzzles. We are still keen on having some non-linear sections in Astronomer but are likely to add secondary paths/puzzles to selected areas only. We also aim to revise the hub layout and readouts to clarify any issues there: one tester suggested that they would like to see a preview of their progress in completed chapters without having to follow the required route and this is something we'd like to see also.

To address artwork issues, our 2D artist - Jonathan McEnroe - is currently exploring additional world artwork with a view to expanding our decorations across several passes. Pass 1 is what we're calling the 'nature' pass and involves adding variety to the natural details in our landscape in the form of new land masses, foliage, surface types, 'cosy' light sources and so on. The image below shows an editor example: 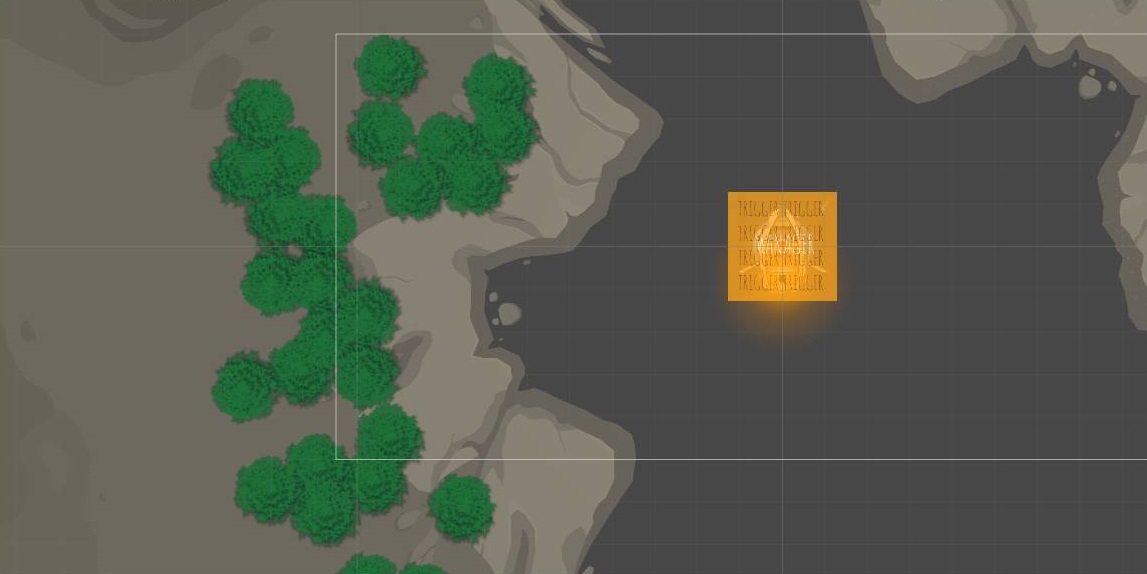 As per the ship artwork, you can see that the base artwork is kept fully-bright to enable us to modify the look for various times of day. The image below shows some runtime examples with ambient light (left) and additional point lights (right) affecting the assets:

We have a range of biomes, locations and times-of-day planned for Echo Lake and we're working hard to ensure we offer players a range of unique locales to explore.

With regards to the pickups in our world, most players have already guessed these are placeholder right now. The secret rock pickups will be expanded and better tied to the gameplay seen in the hub level (a final puzzle is planned). Additionally, we have some story-focused pickups coming to Astronomer and beyond:

Aside from improving the Astronomer mode and refining our puzzle gameplay, we look forward to pushing the game further via upcoming updates which will contain all new modes/features - including:

Our full development roadmap is outlined below via Steam:

Early Access has been extremely beneficial for the Echo Lake project in helping us to direct our efforts. Whilst we would have enjoyed a larger volume of testers at the launch stage, the feedback received in the first month alone has been invaluable in helping us direct our efforts. If you'd like to follow our game or check the current state of development, take a look at our store page below:

Stay tuned for additional IDB articles and Steam updates as we expand the gameplay and world of Echo Lake.