Time for a new announcement; sorry for the delay of the news.

We have been a bit busy with the beta and real life commitments, and here is a small announcement aimed to give some insight information about what is happening with the Steam version of Eastern Front.

First of all, there are two things we need to accomplish before releasing Eastern Front on Steam:

The public version of Eastern Front uses some models which have high poly counts and cause some lag and crashes. We are aiming to replace such models before releasing on Steam and that has high priority for the Developers involved. Right now there are only three.

We know there are several units needed to be replaced, and these will be done in it's due time, but at the moment what has priority is than the mod can run at better FPS. We are also trying to save some resources from the vanilla SGA Art files, which have some vanilla models we don't use and they only make EF load slower (like the Sdkfz. 250 HT or the King Tiger or the Marder III).

Some of the models we use have dubious ownership, so, in order to avoid conflicts once we release the mod in Steam, we are getting rid of those first and so far there is only one left.

What has been done?

Our 3D/2D artists(Beefy, Burro and DMz) have been working as well on different models, here are some screenshots of them: 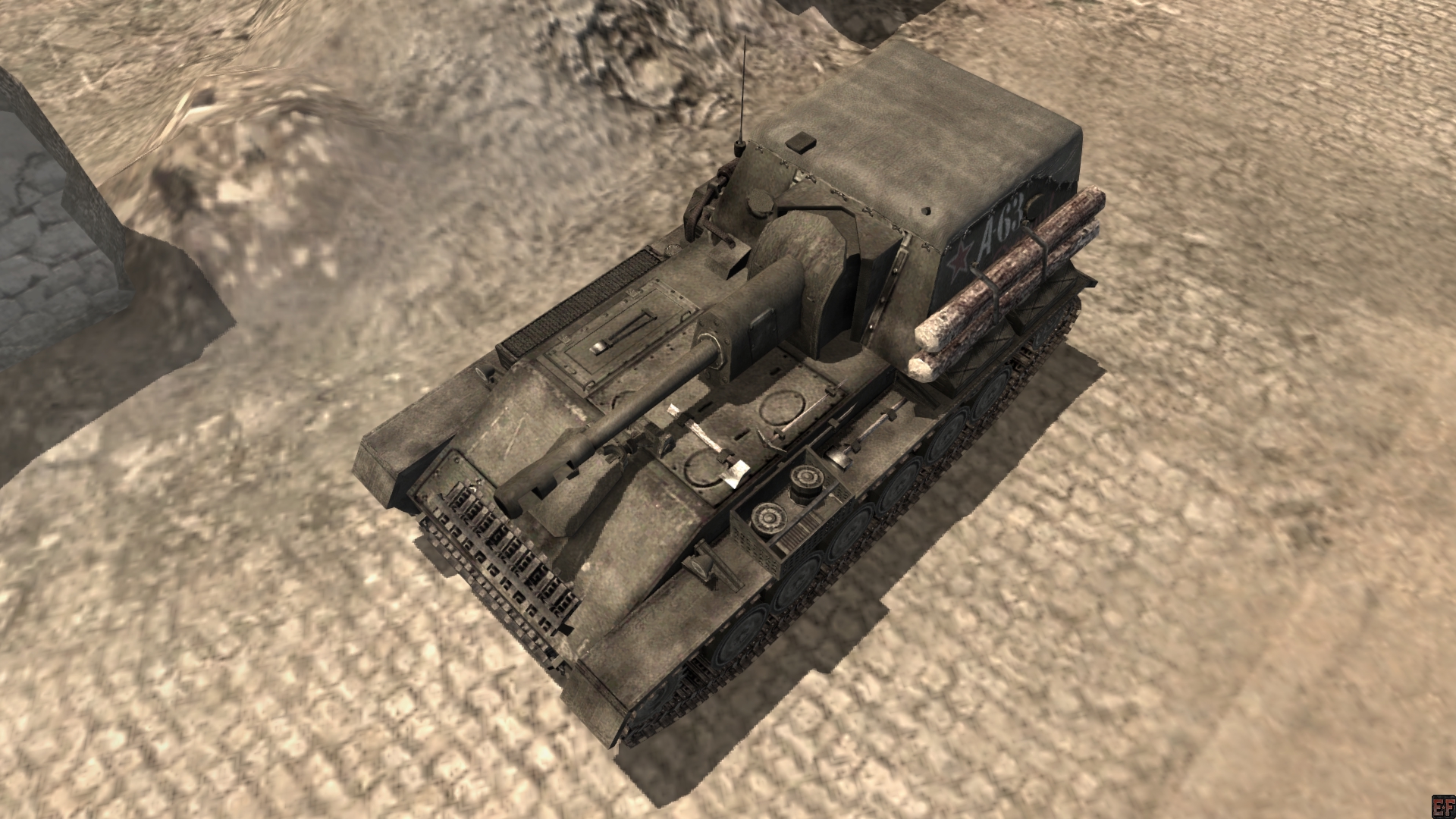 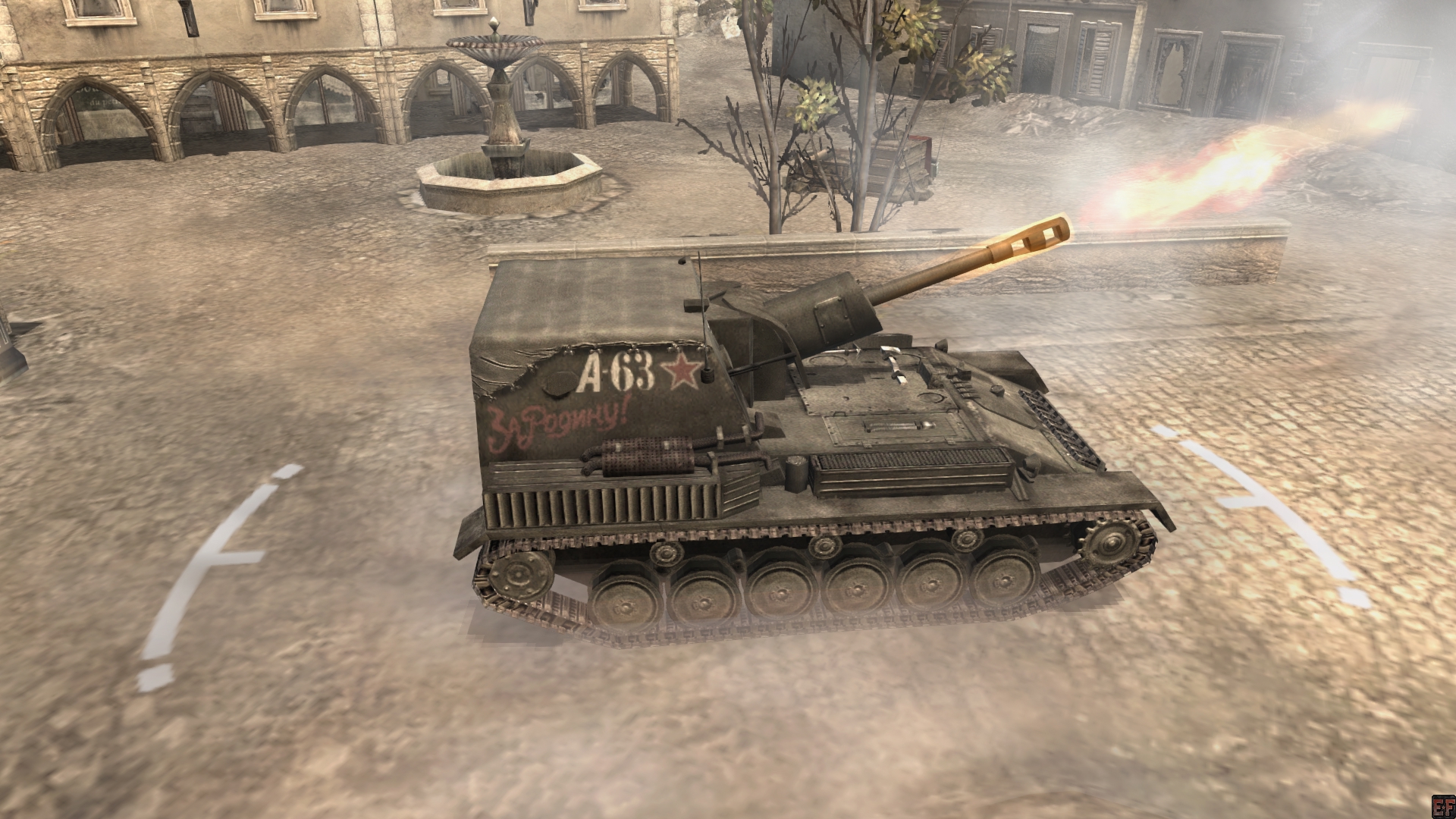 SU-76: This is our new SU-76, and now the cannon has the right animation when firing a barrage. 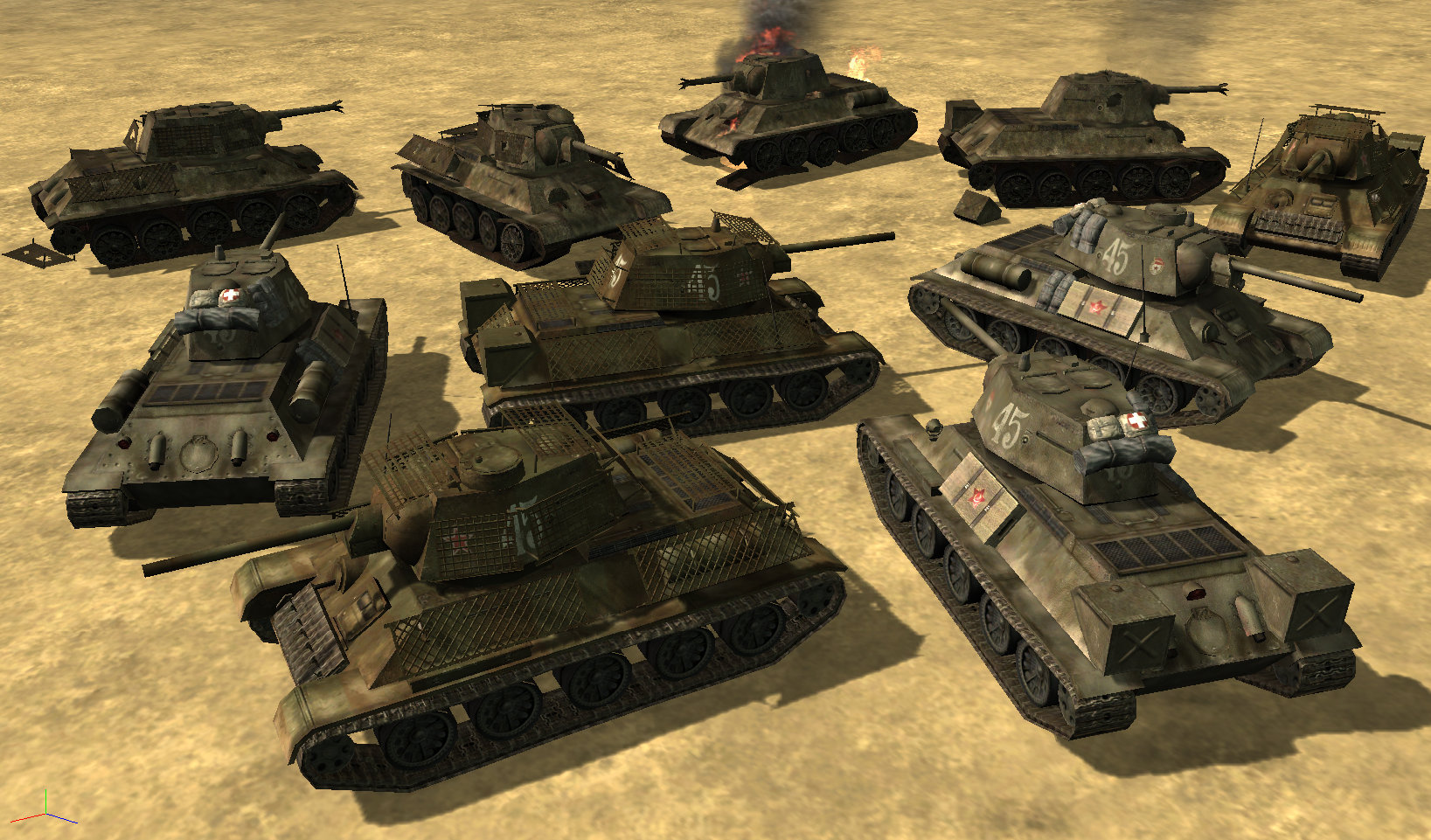 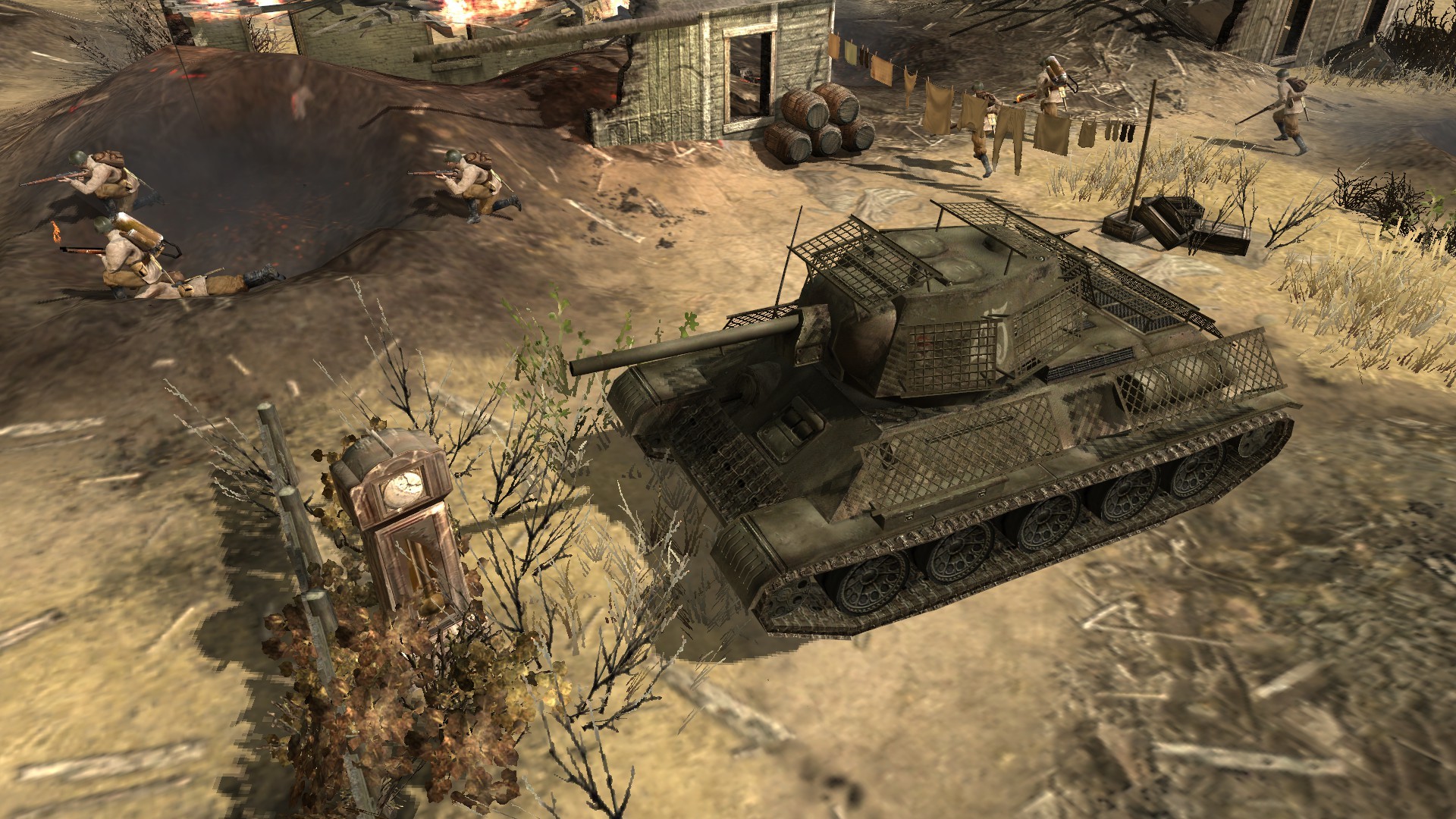 T-34/76: Has the right parts for it's flamethrower upgrade and also can have cage armour like the SU-85 and SU-100. It also is featured with the mine roller upgrade(it comes with the Breaktrhough Assault tree though) and just like the current one, it can be upgunned by paying a cost if the correct upgrade is researched. 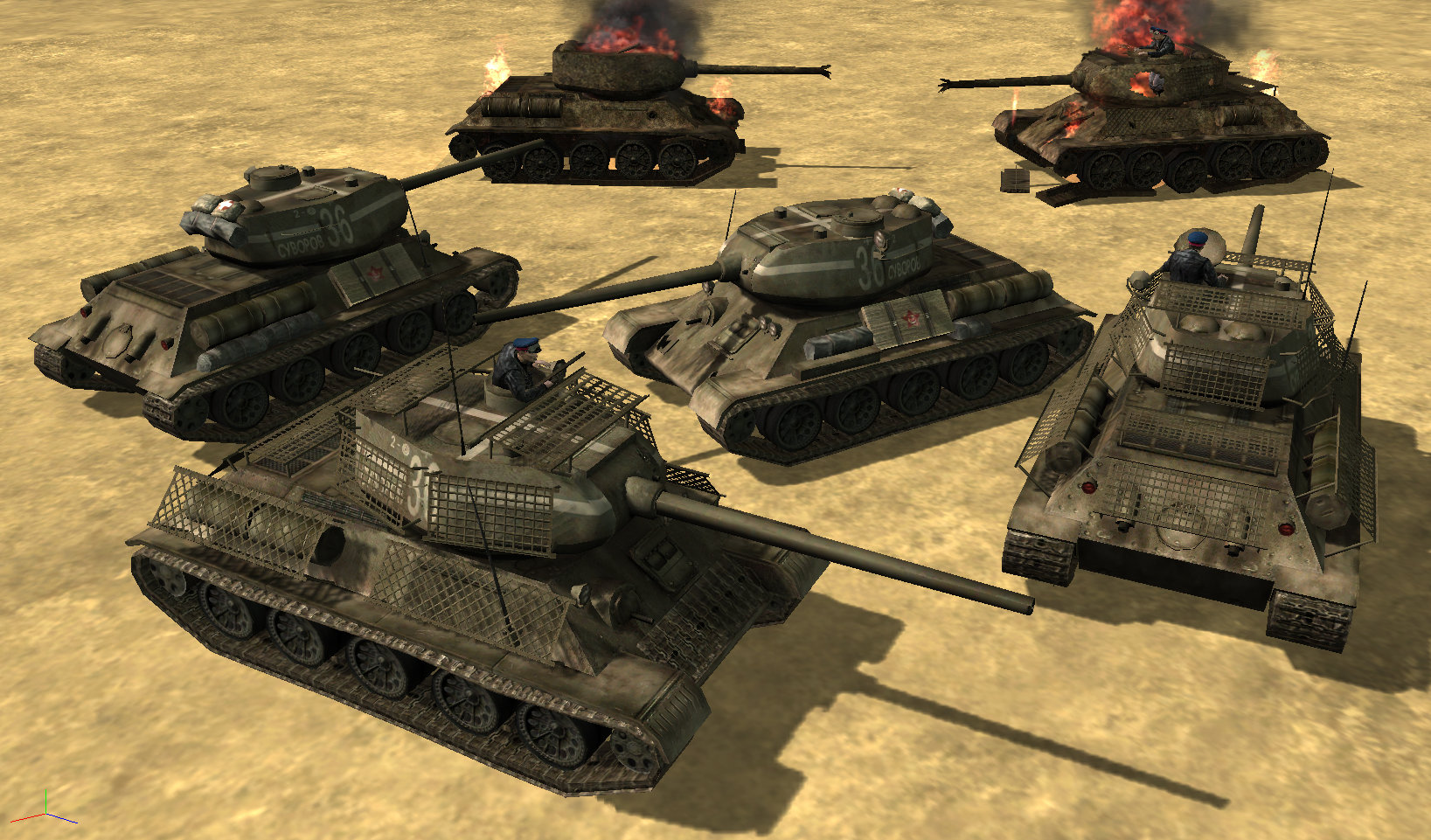 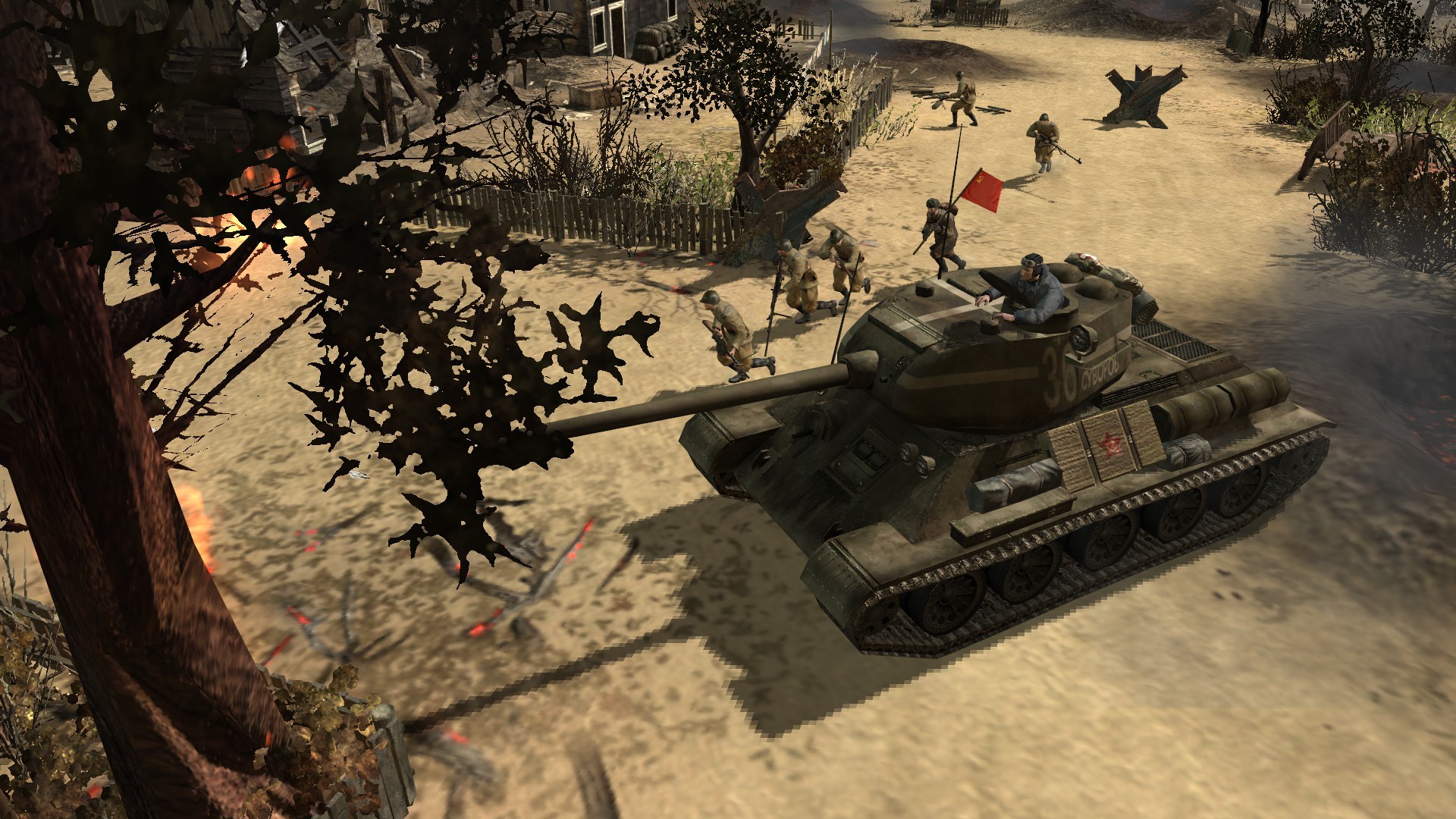 T-34/85: The upgraded version of the T-34/76, and has all the same defensive upgrades posibilities than it's predecesor. And it gets also a Soviet commander in the cupola. 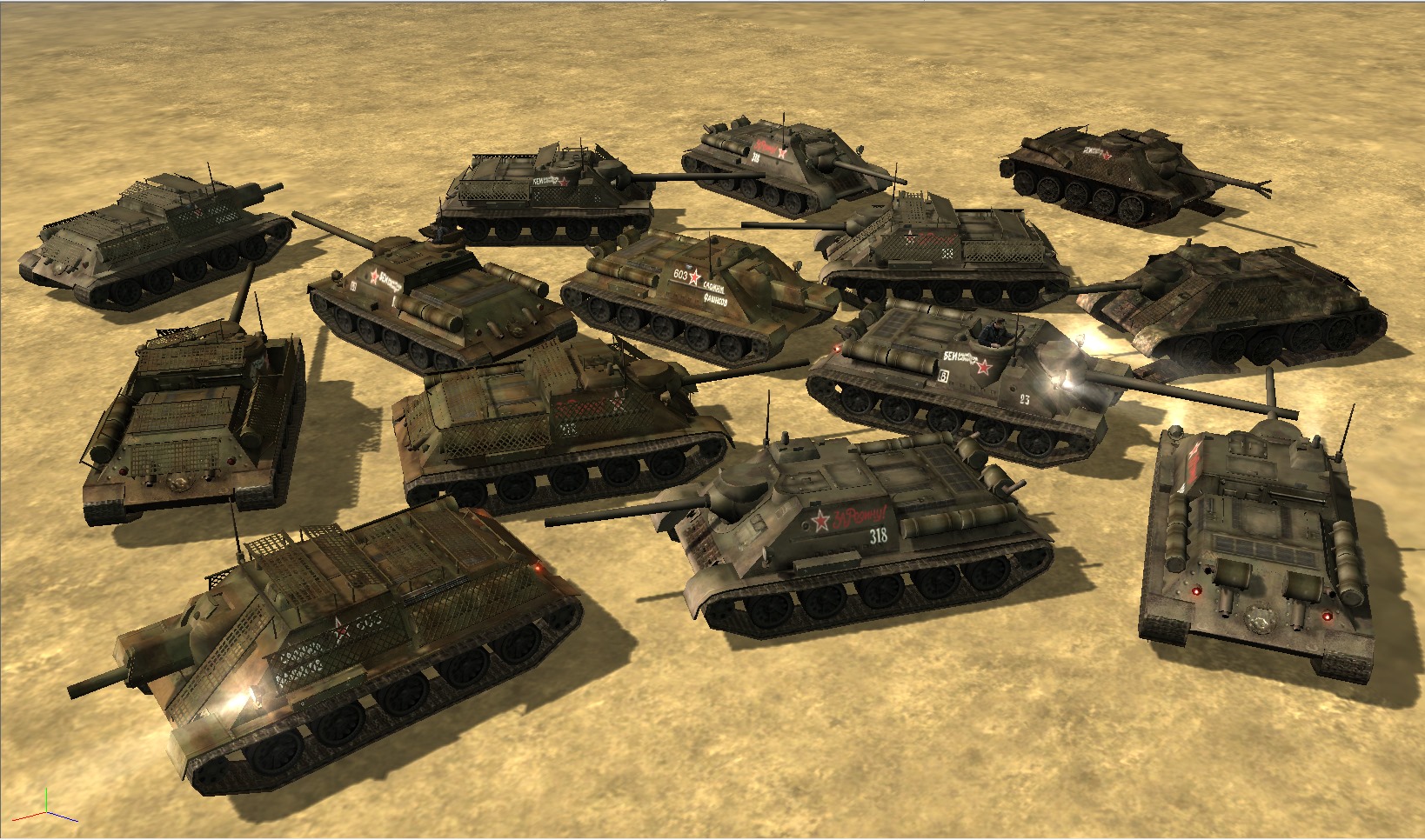 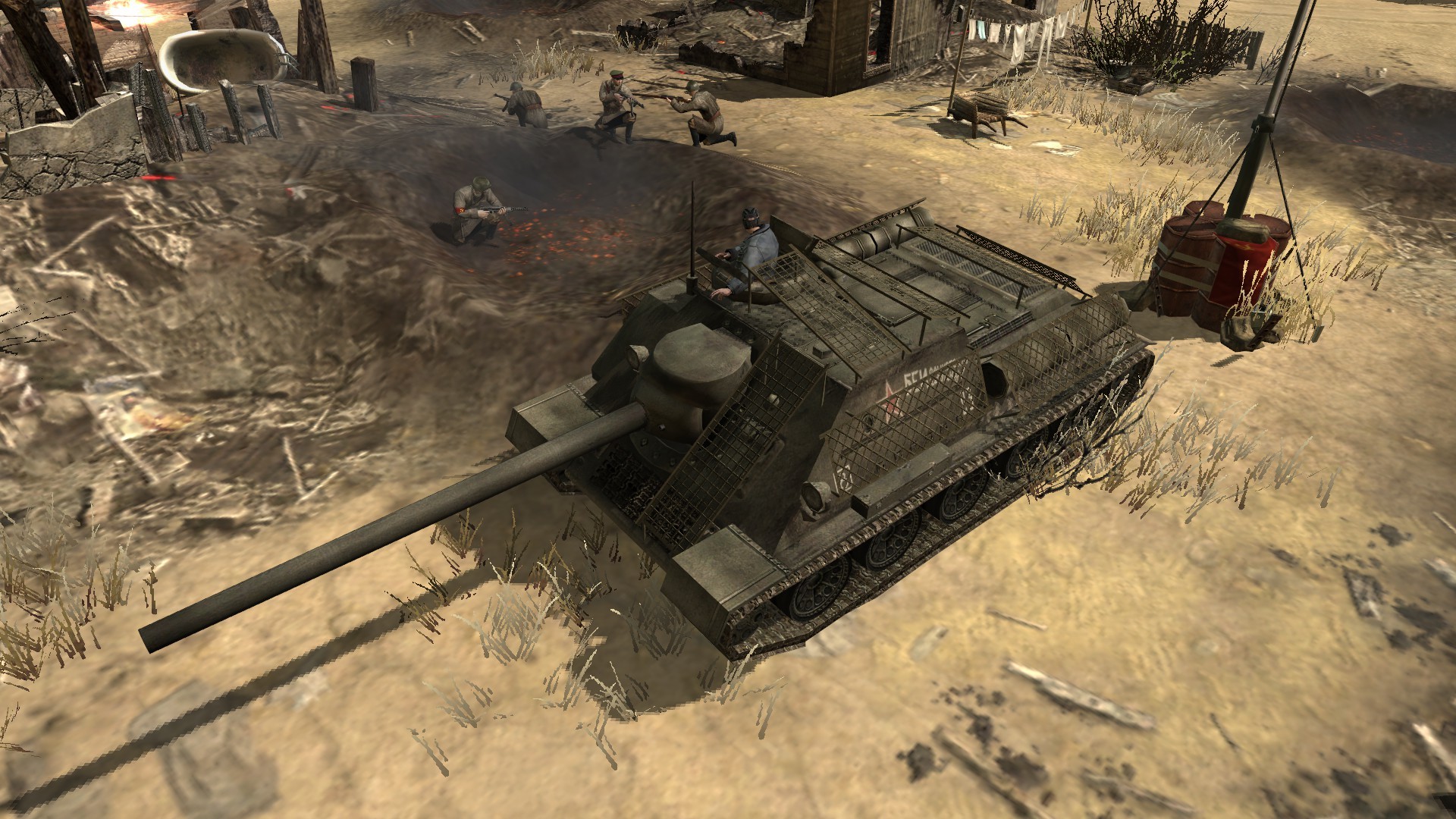 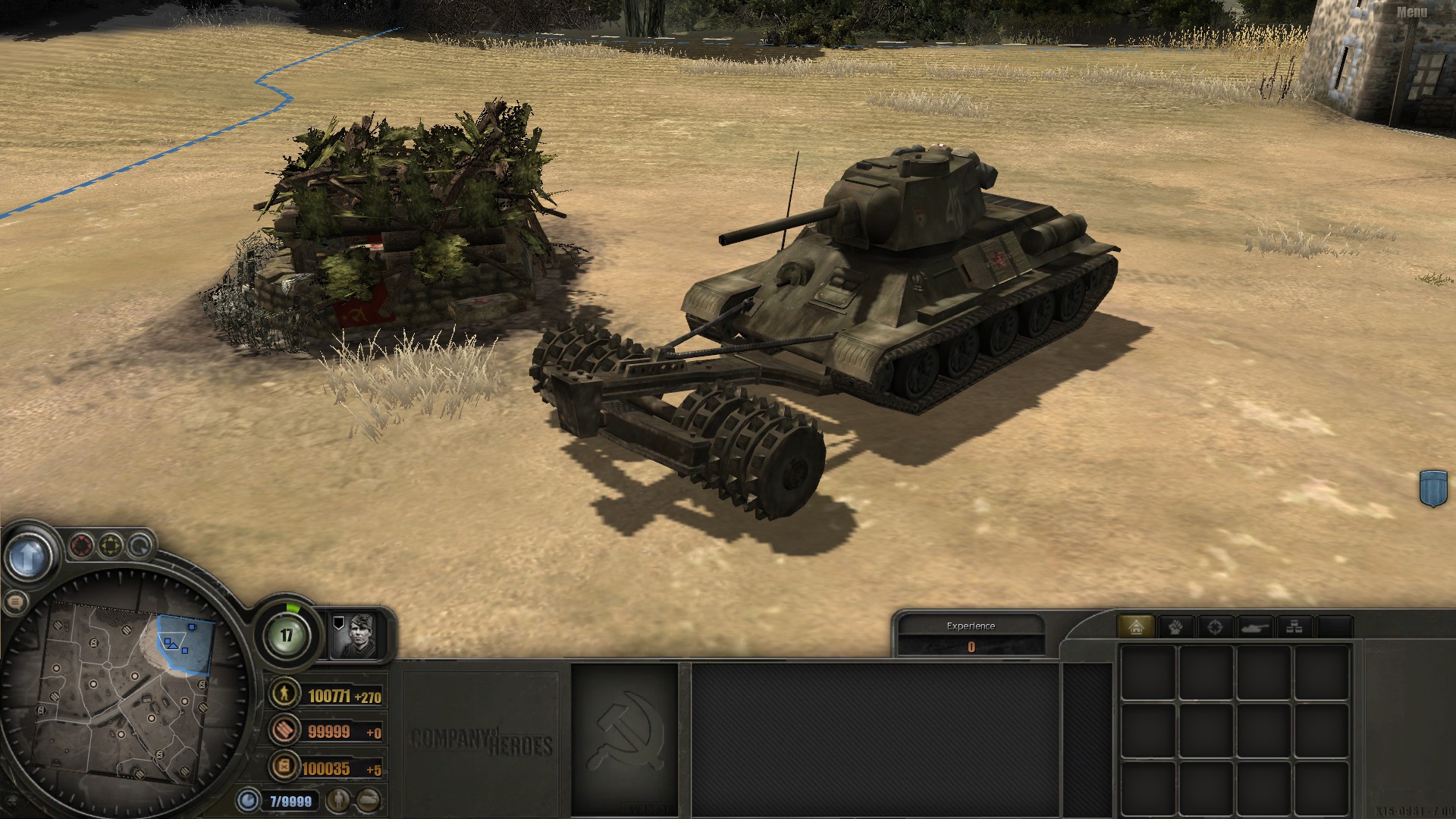 PT Mine Roller: Here is the mine roller mentioned above. It was made to fit in the T-34 series chassis, so, it can be used in the SU-85 as well, if the player requires it. 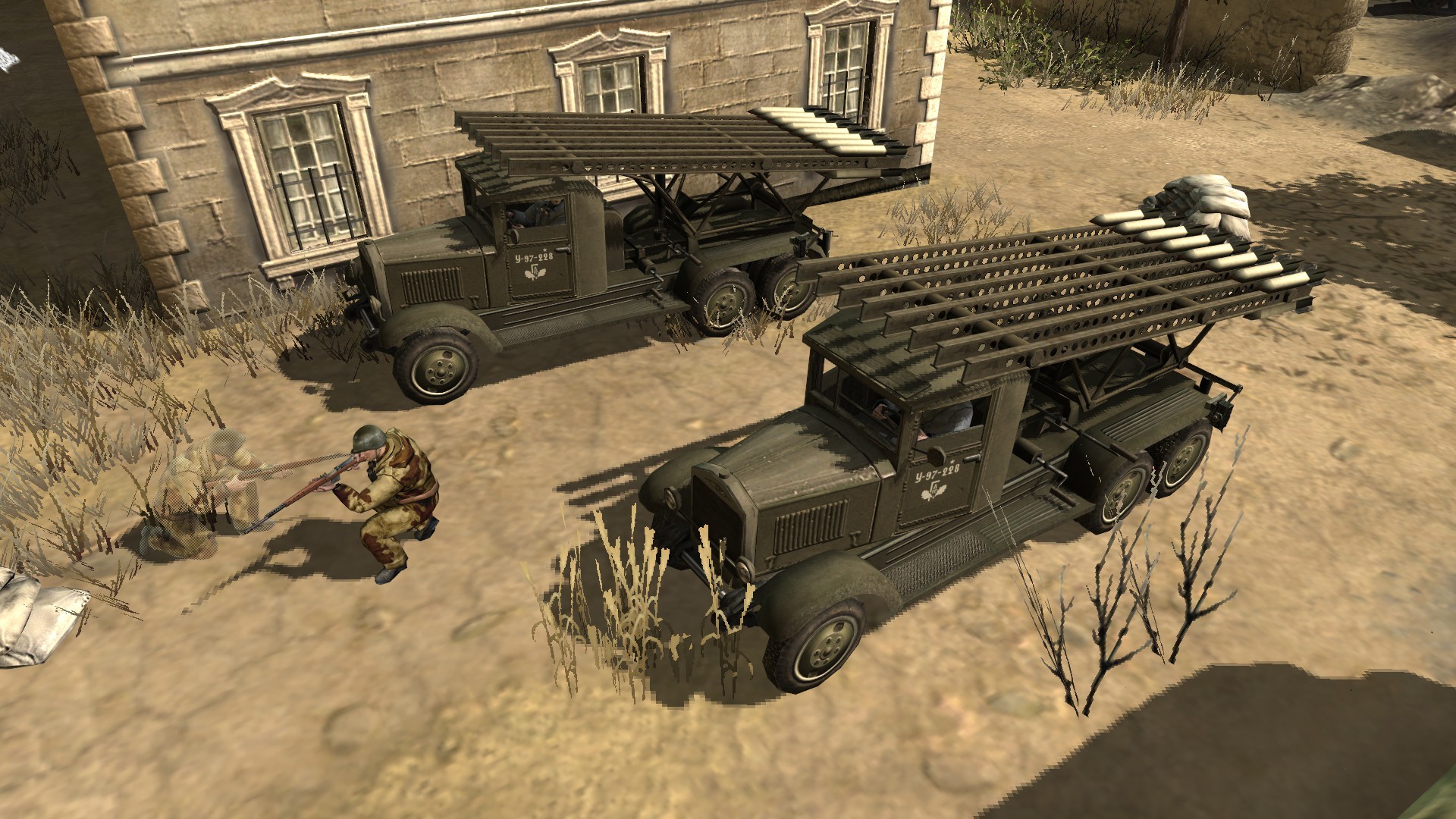 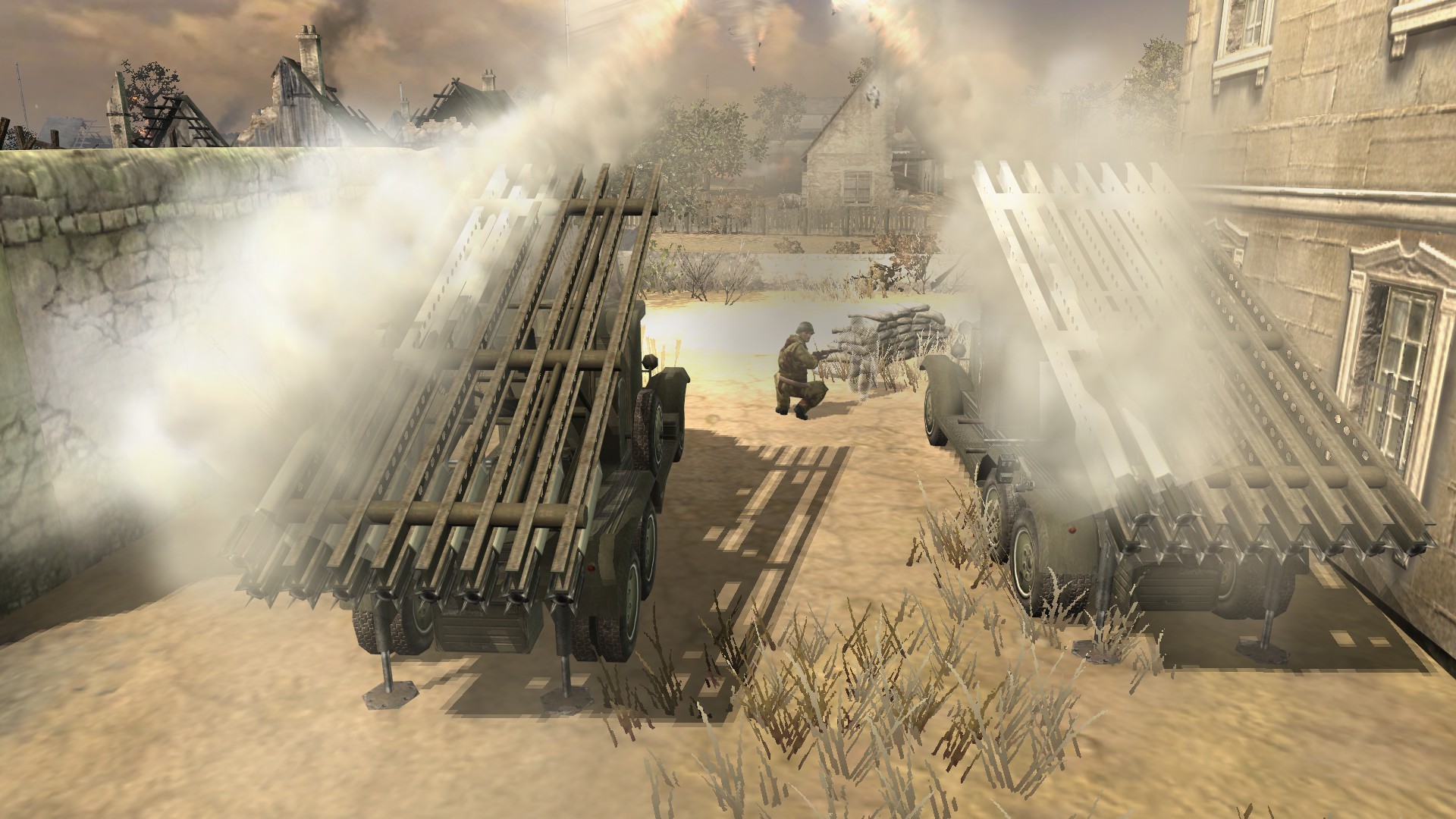 BM-13 Katyusha: This is the new model that will replace our old one. 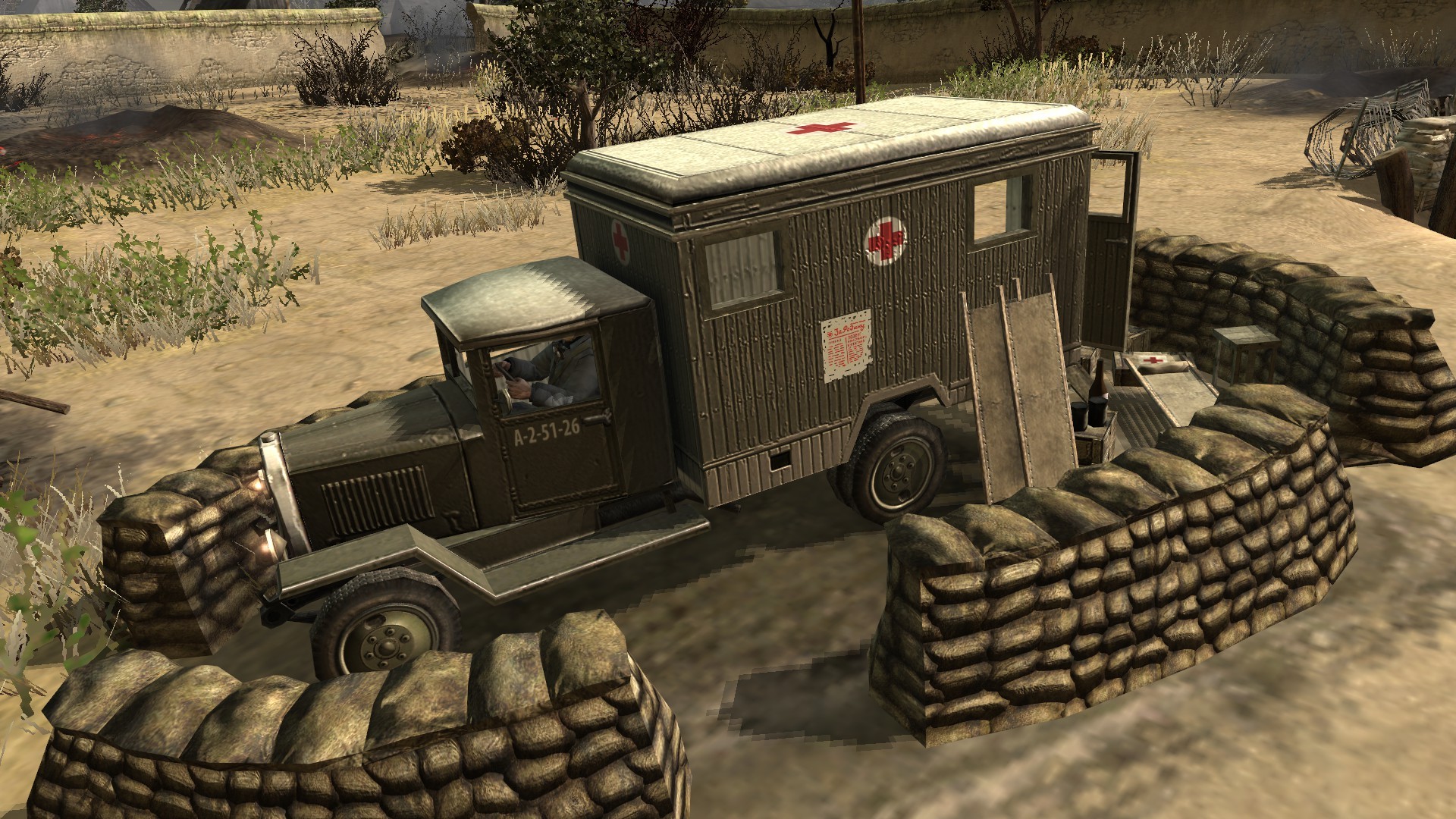 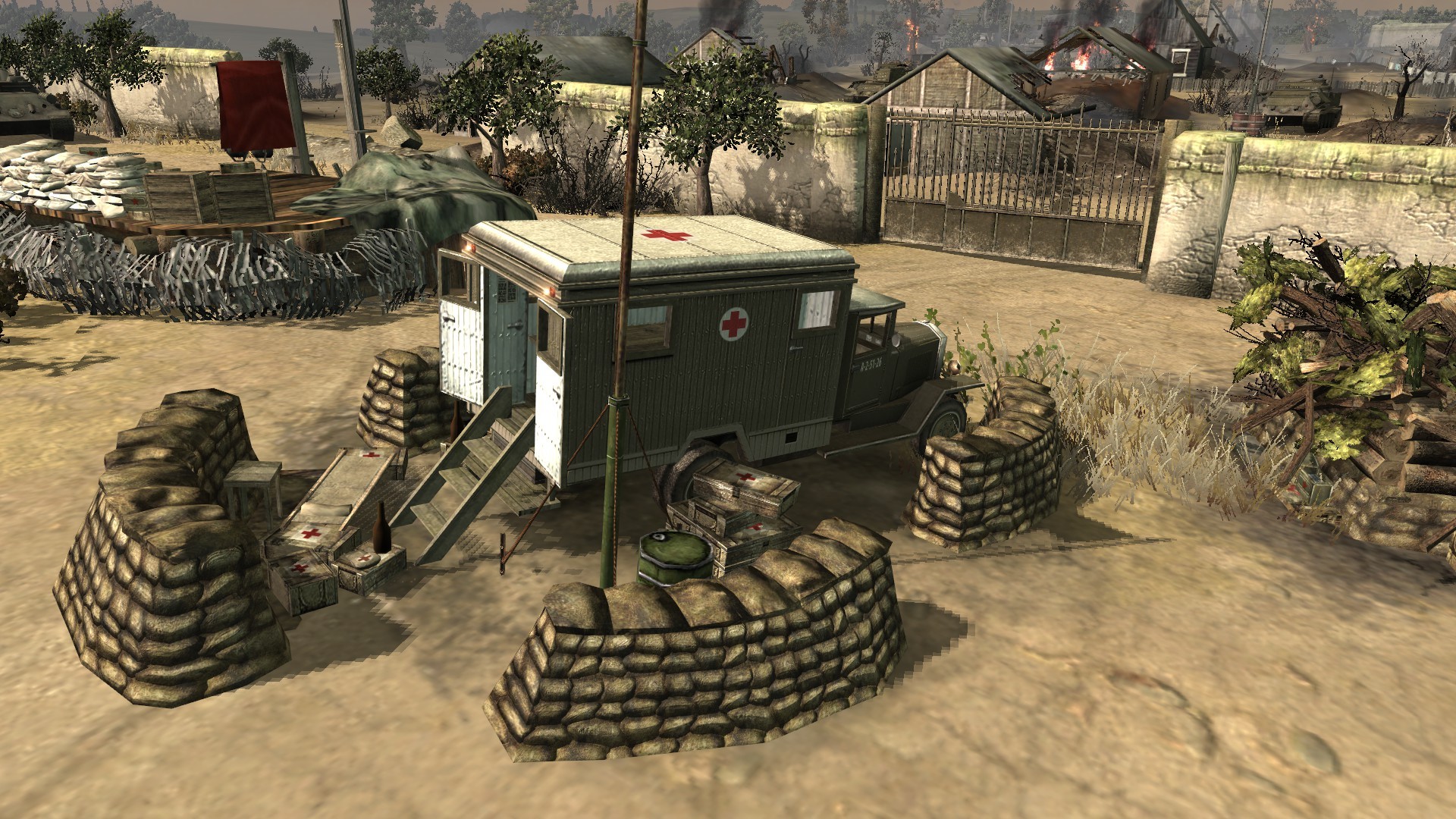 ZiS-44 Field Ambulance: Soviets will now have a proper ambulance, and it is completely animated. 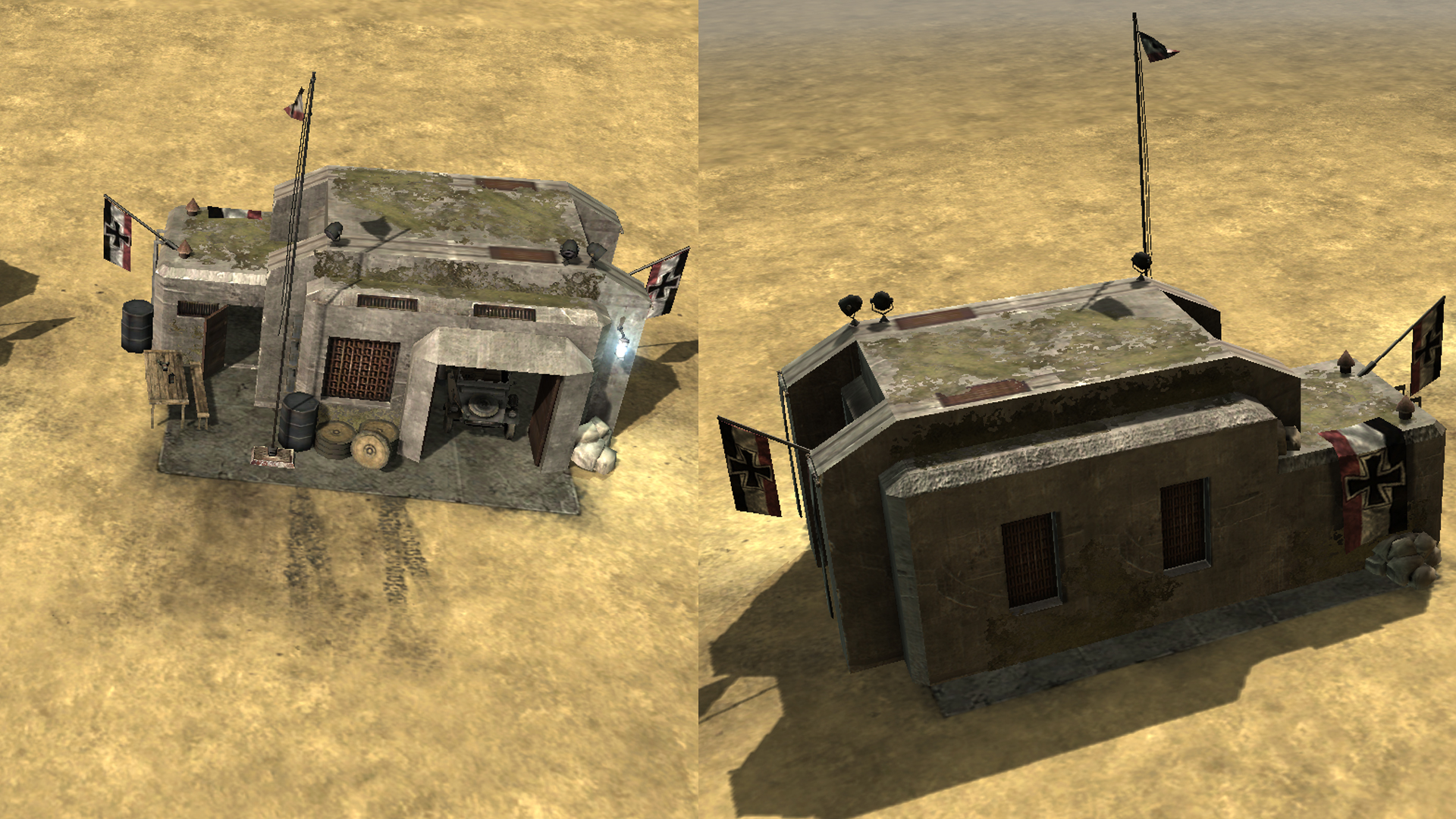 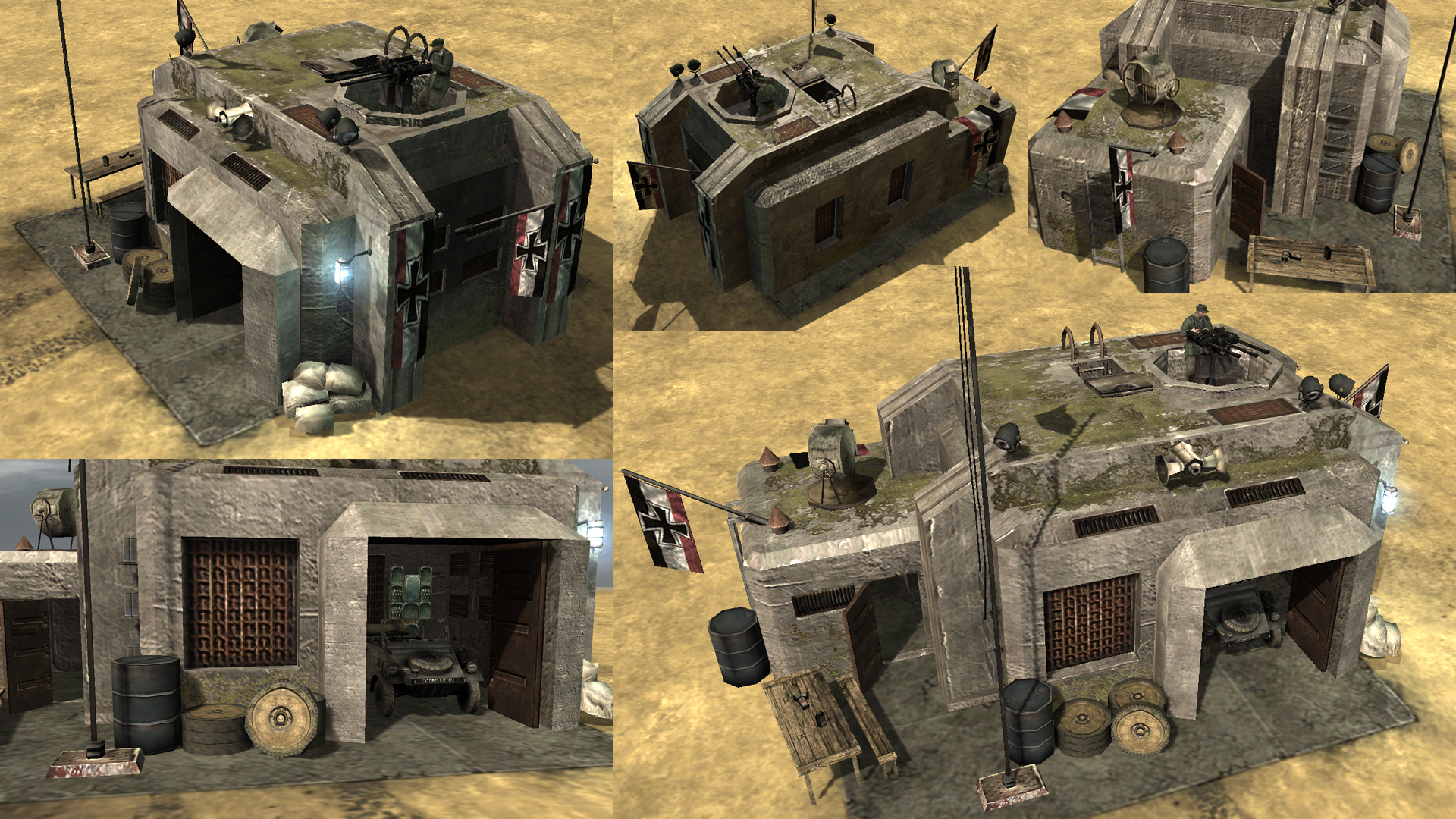 Upgraded Infantry Gruppen Post: Uses less resources from the game and also has some states. 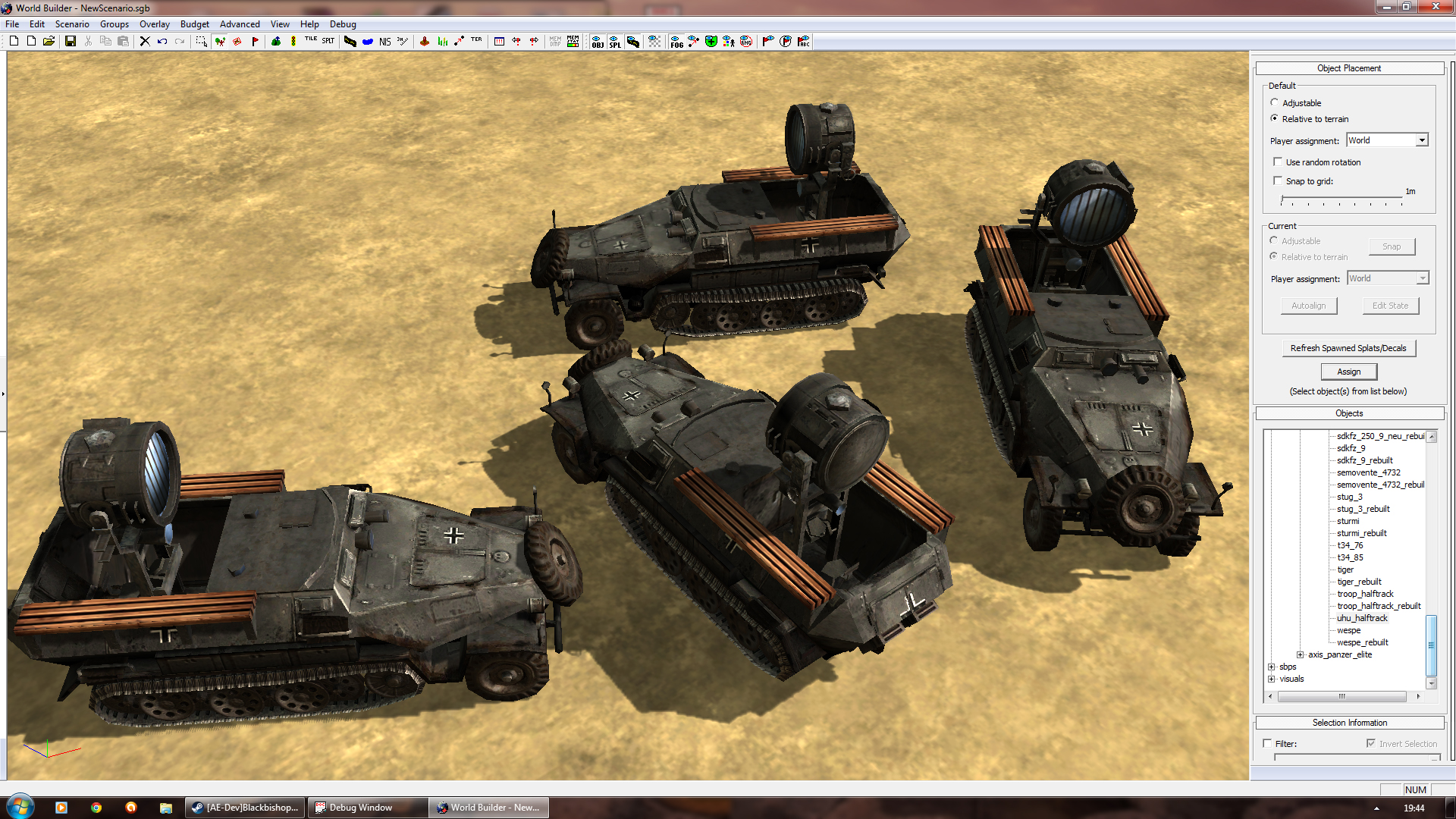 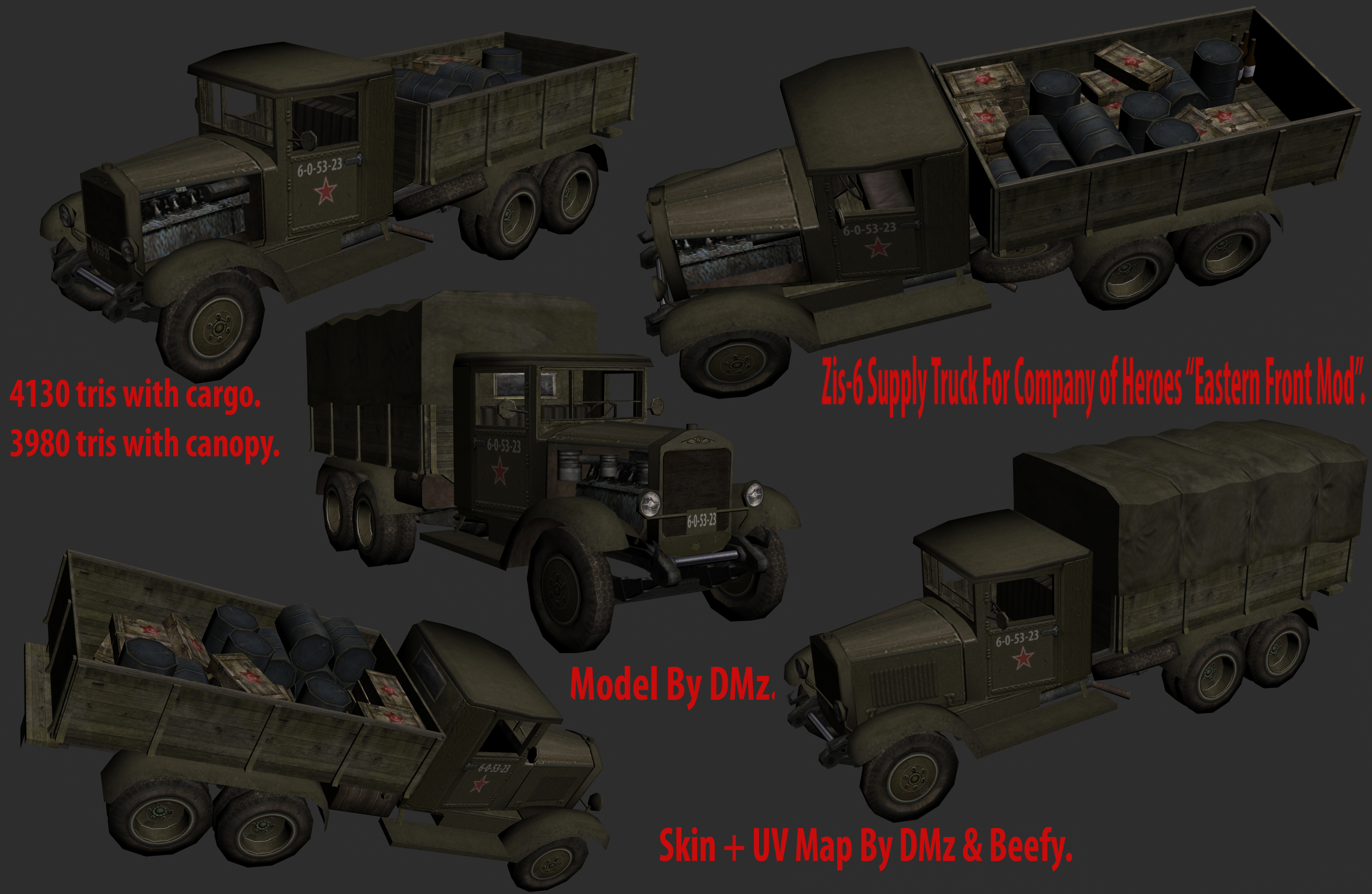 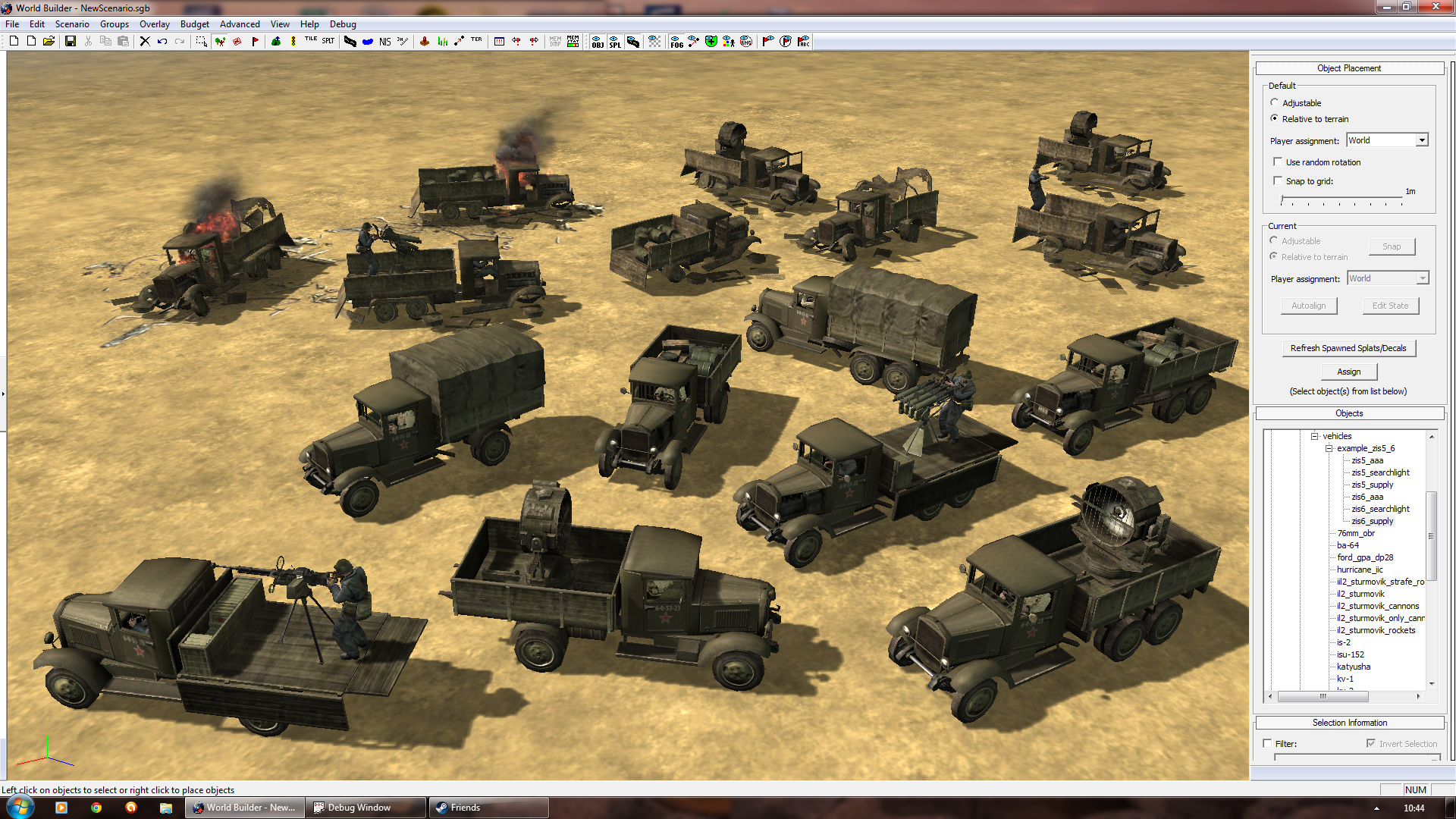 ZiS-5 and ZiS-6 Trucks: This is another model variant that will be used as campaign asset, it has some variants, like supply truck, with a quad M1932 Maxim mount(AAA gun), with searchlight for night operations and troop transport(canvas). 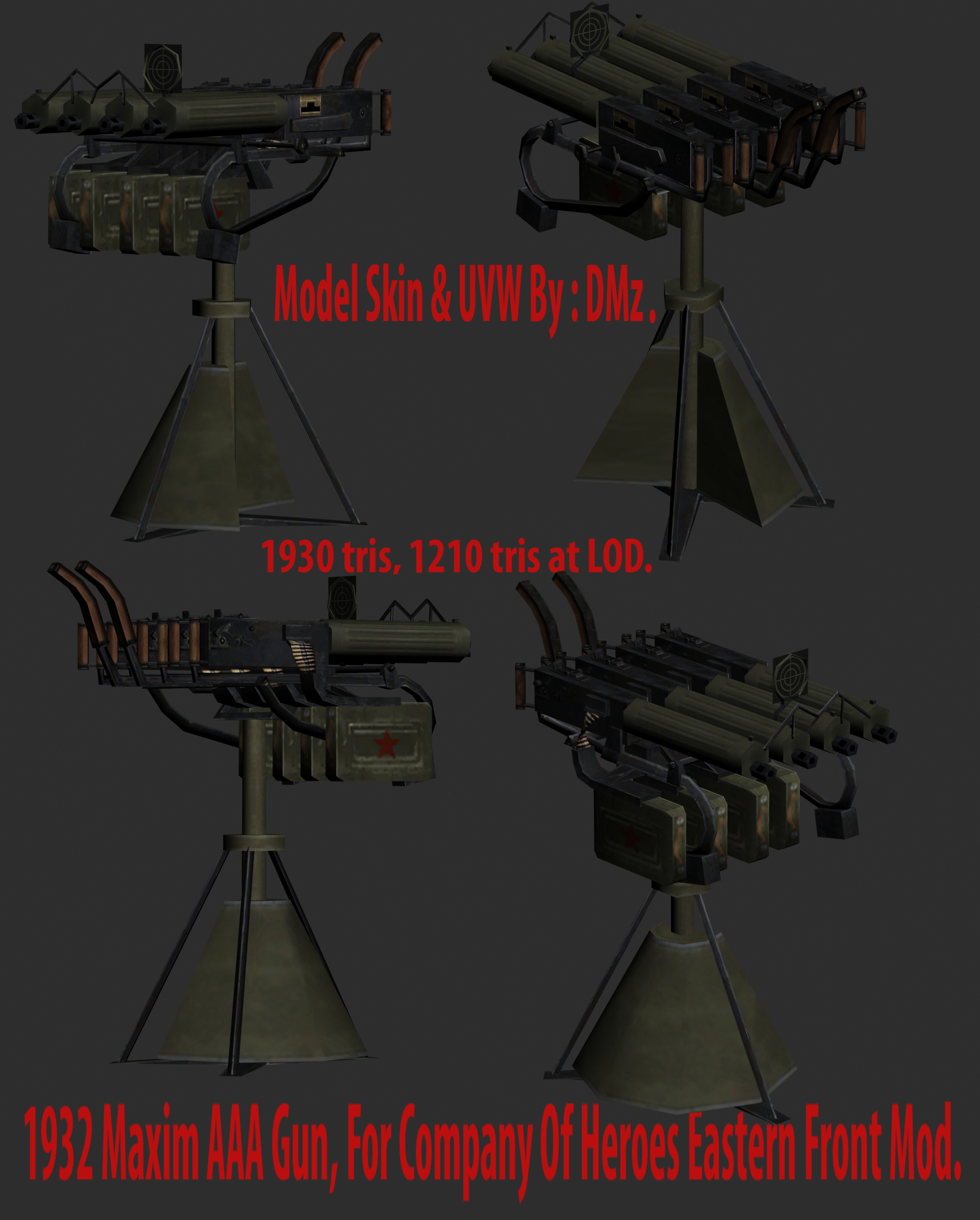 Maxim AAA: This is the Maxim AAA gun, and it will be used in emplacements in some missions. 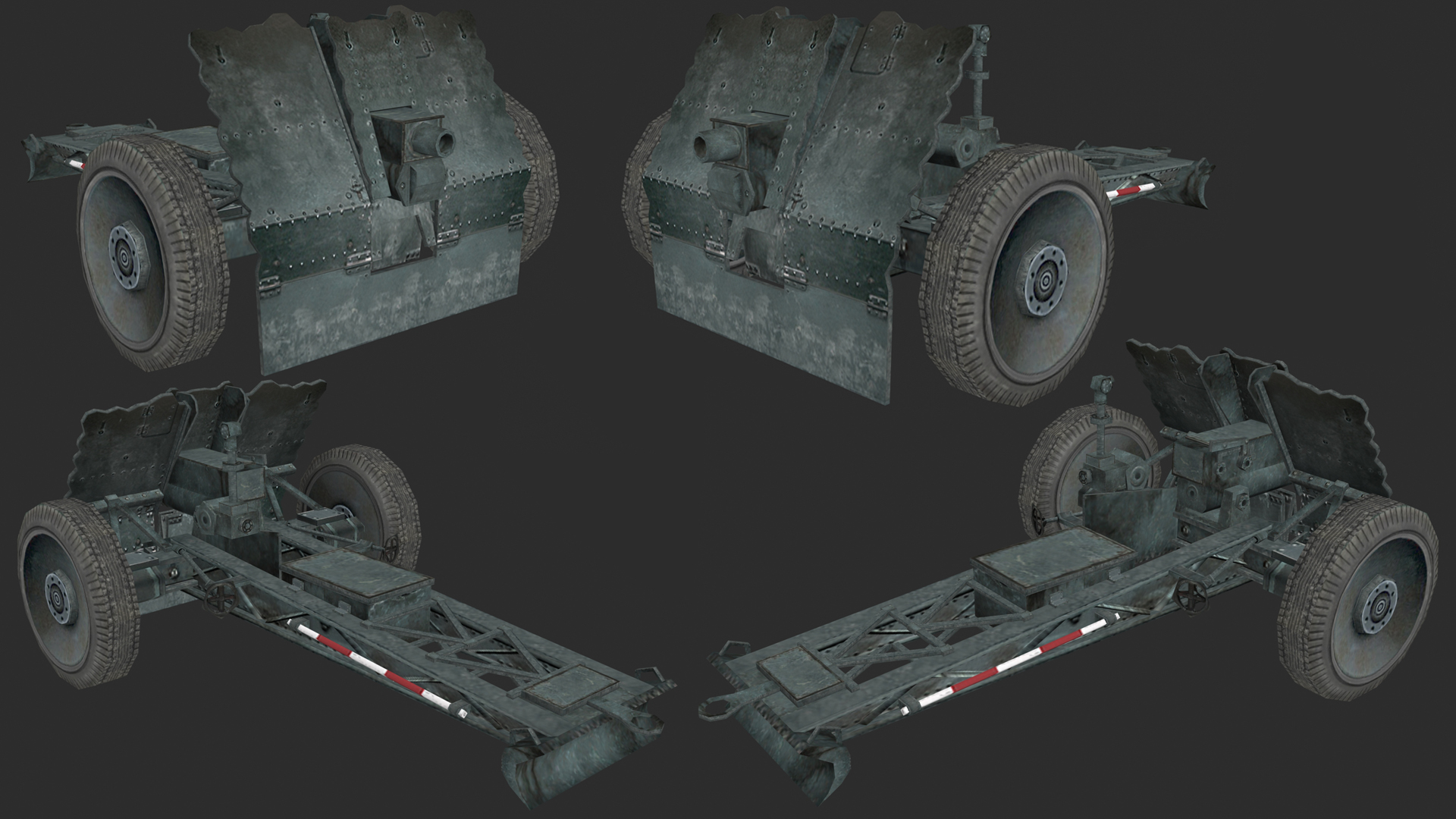 75mm leIG 18: This is the render of the new model, it still needs animations.

Panzer III: This is the render of the new low-poly version of Panzer III. It will have variant textures of dunkelgrau/gelb and disruptive camo [WIP]. 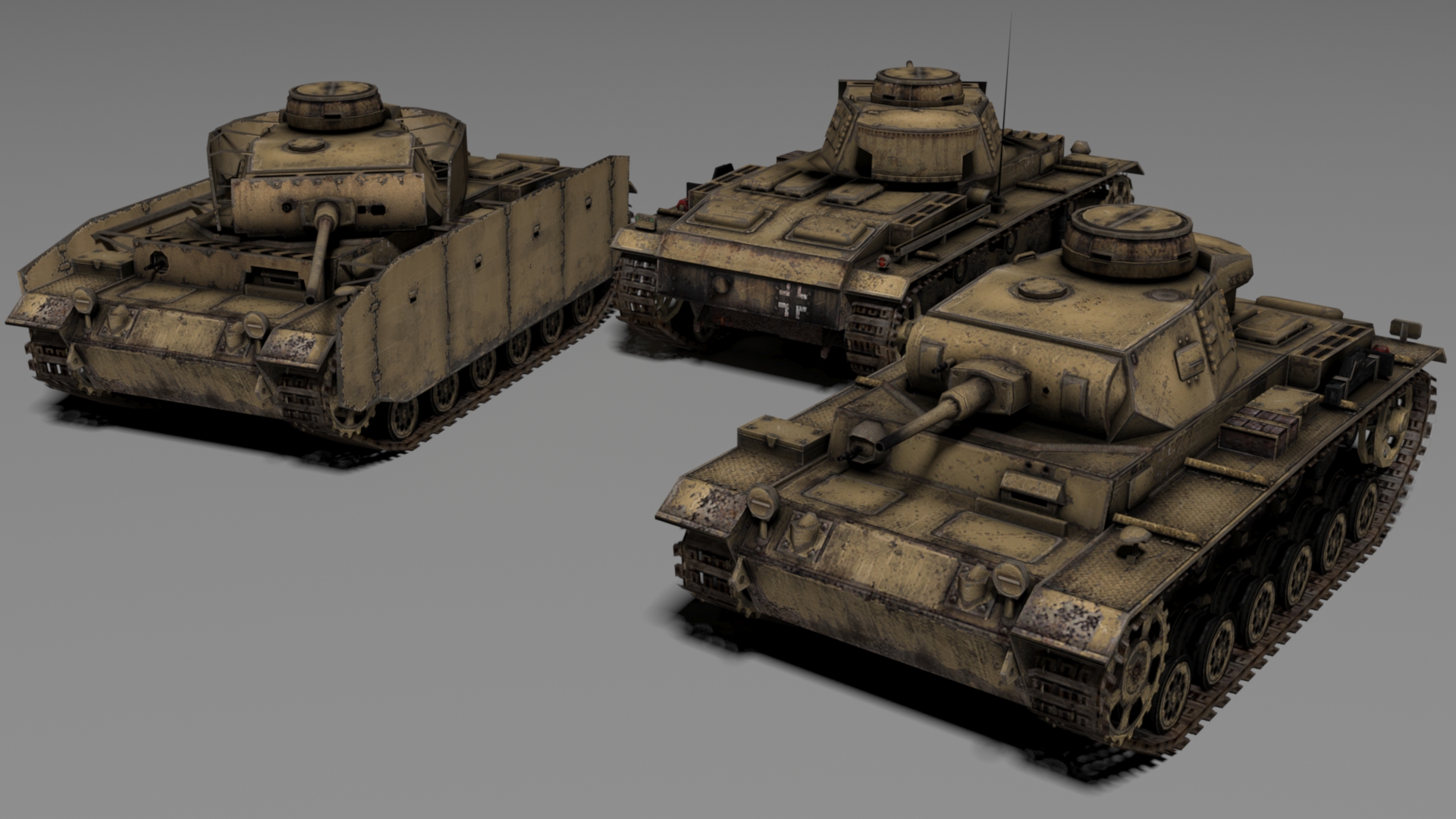 What about the campaigns?

Robotnik is working on the code of the campaigns, and Max and Rommel are working on their maps in their spare time, so we have some progress on that front. But that's for another announcement.

What about the Foreign Command Tree?

We have announced in the past the creation of one Foreign-themed Command Tree used as reward unit for one of the existant trees, however, after some discussions, we realized it was too many units to add for just one tree, so we are thinking of having three command trees focused on this instead of one:

We will talk more about these ideas in future announcements.

What about the reward doctrines?

Most of our players know than we were making a reward tree for Ostheer than would feature the Sturmtiger. After some discussions, we think this tree would fit better for the vanilla Wehrmacht rather than for Ostheer, so we are testing this tree using it as reward for Blitzkrieg Assault and it seems that works better this way. The players that play the beta can confirm this change.

We also decided to make one reward tree for the other vanilla factions as well. We haven't discussed about what they would be about, but if you have an interesting idea, please share it with us ;).

So, when this will be released on Steam?

We don't really know how much time will require to replace the four models we have left, but hopefully it won't take too much time. At the moment we are updating the beta version of the mod frequently, so if you are a beta tester and find a bug, please let us know in the right section. Also, if you found new bugs in the release version, please let us know as well so we can fix them!


That's all for the moment, but stay tunned for more news in the coming weeks!


Thanks for your support,

imo the last tree of the foreign support thing should be the Russian Liberation Army and other foreign volunteers.

@Griffster26
We have ideas to use in the first two trees, however, the third one is just a void ;).

I used the word "tentatively" because we really have zero ideas for it :\.

Left Side:
"Osttruppen-Support"
-Call-in: Osttruppen
medium-large sized unit with a mix of K98 and Mosin-Nagant rifles. A cheap unit like conscripts. May be upgraded with an german officer, which buffs any Osttruppen-Unit around them to Landser-level.
-Call-in: "Beutepanzer"
a single captured T-34.
-Ability: Against the soviet occupying forces!
Makes every Ost-Truppen-Squad immune to suppression and buffs their damage and resistence for a short duration of time. Alternatively allows the german officiers in Osttruppen-Squads to do this locally.

Right-Side
Italian Support
-Call-in: 105mm bombardment
a basic bombardment like the one in the american Infantry-doctrine

-Call-in: Mountain Infantry
unlocks one of two call-ins:
-a single squad of Italian Mountain-Infantry, armed with rifles and the ability to ambrush and throw multiple grenades.
or
-a Italian Cannone da 65/17 Mountain-Gun. Sligtly stronger than the 3,7cm Pak36 and with the ability to shot indirectly

In both cases the supporting Inf could be either Italian Infantry (re-skinned Landsers with Italian rifles and options to gain Panzerbüchsen or Italian SMGs) or just plain mountain-infantry.


Quite Infantry and Call-In-Heavy, but I like it :)
What do you think?

@the_only_SIRIUS
I don't like it because it has a lot of call-ins and you suggest units that weren't used in the Eastern Front by Italy, and a lot of stuff we don't have. There is one user working on an Italian tree: Easternfront.org

This still work for the older versions of CoH or unupdated steam versions?

You have to have your retail version updated to at least 2.602, then apply the compabiltly patch. However we can't guarantee that it's going to work, so use at your own risk.

What new model Panzer 3 will be different from the old?

@chs94
As mentioned in the point #1 in the announcement, it gets fewer polygons. So it will help EF to have better performance.

If you mean new physical/visible additions, it won't have any because the old one was fine as it.

I just deleted CoH1 a few days ago, I will reinstall it just for this mod when the new version comes.

Good luck, can't wait to see your awesome Steam release! >< Is good to see you guys :)

@NEEDACODE
Yes, it is possible. We would need a good plan for that though :).

Quite impressive models you got there!

when will this release on steam. i know u guys said u do not know when and im not trying to be a ****. but u have 3 modelers, how long does it take to re skin 3 models. =) love the mod. still playing it strongly.