First of all we would like to apologise for the apparent lack of any news in February. We have been unable to post any news, partly because of private issues such as work, but mostly because of the internal reorganisation of our development team.

This topic is going to be in the spotlight in this news post. Due to his limited amount of spare time, current project lead Klon has been forced to step down from his full time position and assume a supporting, consultant role. The same thing happened when Klon himself became the project lead of the team, after MerlinGalgotta did not have enough time himself.

After all the votes had been put forward, it was decided that Origin is the new project lead, and that the newly returned HuGuSSi is assuming the position as co-lead.

There are also some more newcomers; Lord Sokar joined our team as a new props artist, L8sP33D became a level designer, Baal went from a beta tester to a developer in 2D Art and Scripting and Severon joined us as a new 3D and Animation Artist.

Together we continue our work onwards to the next steps of completion of Stargate - Empire at War: Pegasus Chronicles: The ground part and the Galactic Conquests.

But fear not; we are still working on improving the space skirmish-only version. Currently we are working on some stability issues with the launcher, all the reported bugs and all the criticism we have received from you, the community. It's been very helpful, keep it up!

We are of course working on all aspects of the mod; particle effects, sound design, 2D and 3D art, balancing and coding, all to bring you a better experience. All of this will come together in the first
official patch for the space skirmish-only version of Stargate - Empire at War: Pegasus Chronicles!

To keep you occupied until the next news post, we have some screenshots to show you. Down below you will find screenshots from maps included in the aforementioned patch, so feel free to take a look at them and try to figure out what planets actually represent! In this thread over at our forums we will unveil more content as time progresses and in the end lift the veil of mystery completely. 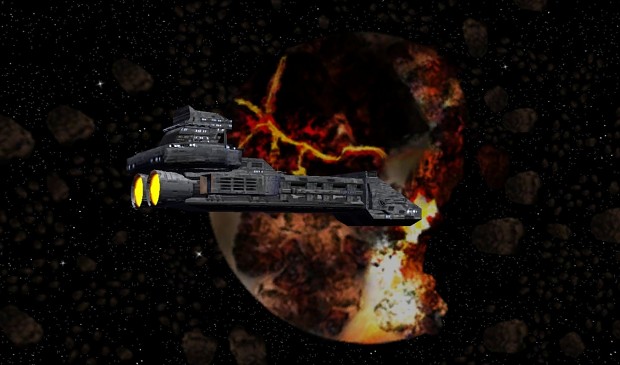 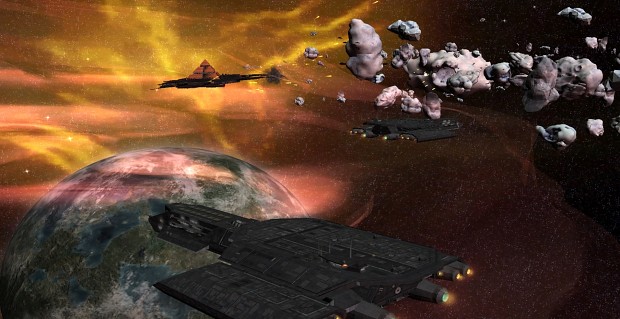 With this we conclude the March news of 2013 in the hopes that most
of your answers have been answered, and that you will have a happy and
entertaining Easter!

I don't like the first image. I can't put my finger on why. Just doesn't look right.

I'm honored to be the first here to say that we don't care if we miss a month of news, or even a year of news, you guys can take your own time to make the mod and we'll be damned if we let anyone try to rush you. Take the time to put the perfect amount of quality into this mod. You've come a long way so far and we don't want you to ruin it by feeling you have to post news on a monthly basis. If you have nothing to say - Say nothing. You're not inclined to tell us anything.

I'm also happy to say congratulations a good luck to you, Origin, you'll probably need it. And a warm welcome to all the new members of the team.

I couldn't help but notice no mention of a campaign. Just to try and clarify this for myself and others: This means that it's still planned but you are not starting development yet. Correct?

I've been watching this mod from the start. It's been an honor to see it evolve and form into what it is today.
Carry on; and make us proud.

Thanks for your critism. But don't worry, we working on a "Campaign", but not such as the original, just like in the Final 1.3 as story GCs. And because we working not just on one GC, it need more time to finished all.

Btw. what do you don't like on the first image? Notice that this is just a small part of this new map, a closer look, not more.^^

to me it's that the planet looks somehow less realistic than the rest of the image, I realize that this is a problem with the game engine only allowing certain amount of textures and only certain size textures at that (or something) and that there's little or nothing you can do to improve on the quality of the planets, especially when I'm not at all sure what exactly is wrong with it.

There is no wrong with it. It is just a Skydome, the background of the map and it shows a destroyed planet. Not more. But it is necessary to find out which planet it could be (or exactly what a planet it was)^^

If I had to summon up the problem with it in a phrase...
I'd say it looks 2D. Can't make it any more clear than that.

It is just 2D, because it is the Skydome, the background of the map, like I mentioned.

We began the development of the gc's in 2009 ;).
But because of the Space release the work was paused.
I returned as Lead Scripter and work again at the gc's and we have "adjusted" some other guys for the gc's. We will have several gc's at the release.