Advisors, citizen representatives and a bunch of fixes!

Hello!
Version 0.18 will be live in just a minute. It's been a while since the last update so this is a pretty comprehensive update.

Major updates
- Local area effects added. This system will get tweaked over time, but currently crime, education, health, wealth, fire safety and pollution levels are calculated. The area effects affect quality of life for residents and businesses and will lower efficiency in a building by up to 25%. Specifics on some of the effects can be found below. Education and wealth effects are currently not updated to the new system, but can be viewed in game.
- Crime level calculation changed. Now it is based on the result of the local area effects of crime after policy effects are applied, as opposed to a calculation of total population minus policy effects.
- Similarly to crime, health is now calculated based on the result of the local area effects of health after policy effects.
- Fire safety is now also based on the sum of local effects of fire safety.
- "Other safety" is now the sum of crime safety, fire safety and welfare availability.
- View modes changed to accomodate for the addition of local area effects. Instead of cycling through modes, button now opens a menu with the different modes. Cycling can still be done using the tab button.
- Advisors added. Unlocked when building city hall. Advisors will give tips on things that need to be adressed in the city. This is the first iteration, so it's a basic implementation. More help topics and features will be added over time.
- Citizenreps added. The current implementation is very barebones. In upcoming versions you will be able to get advice from the reps regarding things that they want adressed in their neighborhood and display their places of work and their homes.

Minor updates
- Value of exports and imports (and trade balance) added into trade panel.
- Middle and upper tier residential, commercial and industrial buildings no longer require clinics, fire departments and police departments. Instead, buildings built in areas with high crime etc. will receive a penalty (see local area effects above).
- Added a 0.5 size vactrack piece. Vactracks will be getting a slight overhaul in one of the upcoming versions, so it might be a good idea to not go wild building massive vactrack systems as they might break!
- Now only one City hall, National bank, Customs house and lab is allowed per city. Saved cities with more than one of these buildings are not affected.

Minor fixes
- Lab given resource priority (similar to how farms and power plants have priority).
- Incinerator was incorrectly affected by the global economy. This is fixed now.
- Destruct hologram fixed for city hall.
- Fixed bug where display price of goods would not match up with actual revenue/cost when selling/buying resources.
- Collider for recycling center fixed.

Other
- We're back to the usual spring/summer theme!
- Lighting adjusted to make "underside" of cities brighter.
- Cross fading applied for LOD:s. This makes LOD groups fade in, rather than pop in. This also means I've been able to switch LOD distances and make high poly versions of buildings visable only from close distance.
- Tweaked tree shader
- Swedish localisation updated.
- Fallbacks to english added for missing translations in German, Spanish, French and Russian to avoid missing texts. The missing translations will be added in an upcoming update making all localisations equal and complete (for now).
- Atmofleets spruced up a bit.

First of all, the update adresses a handful of bigger bugs related to buildings not registering properly or incorrectly registering as a nearby good or bad building. Building unlocking from population targets being reached were also bugged out at times before, this has now been fixed.
There's been a crash bug that occurs sporadically when going to the main menu from a city. I've not been able to reproduce the issue after making some changes to how threads are handled, so that should hopefully be fixed now.

The biggest change in this version is how crime, health, pollution and fire safety is now calculated on a local level, instead of a city wide basis as it was before. Education and wealth levels have also been added into this system, but education is still calculated based on city wide values as before, and wealth currently has no function. They are viewable in the view mode though, so you can still see for example which areas are poor, and which aren't.
More tweaks to these systems will be made over the course of the upcoming versions. 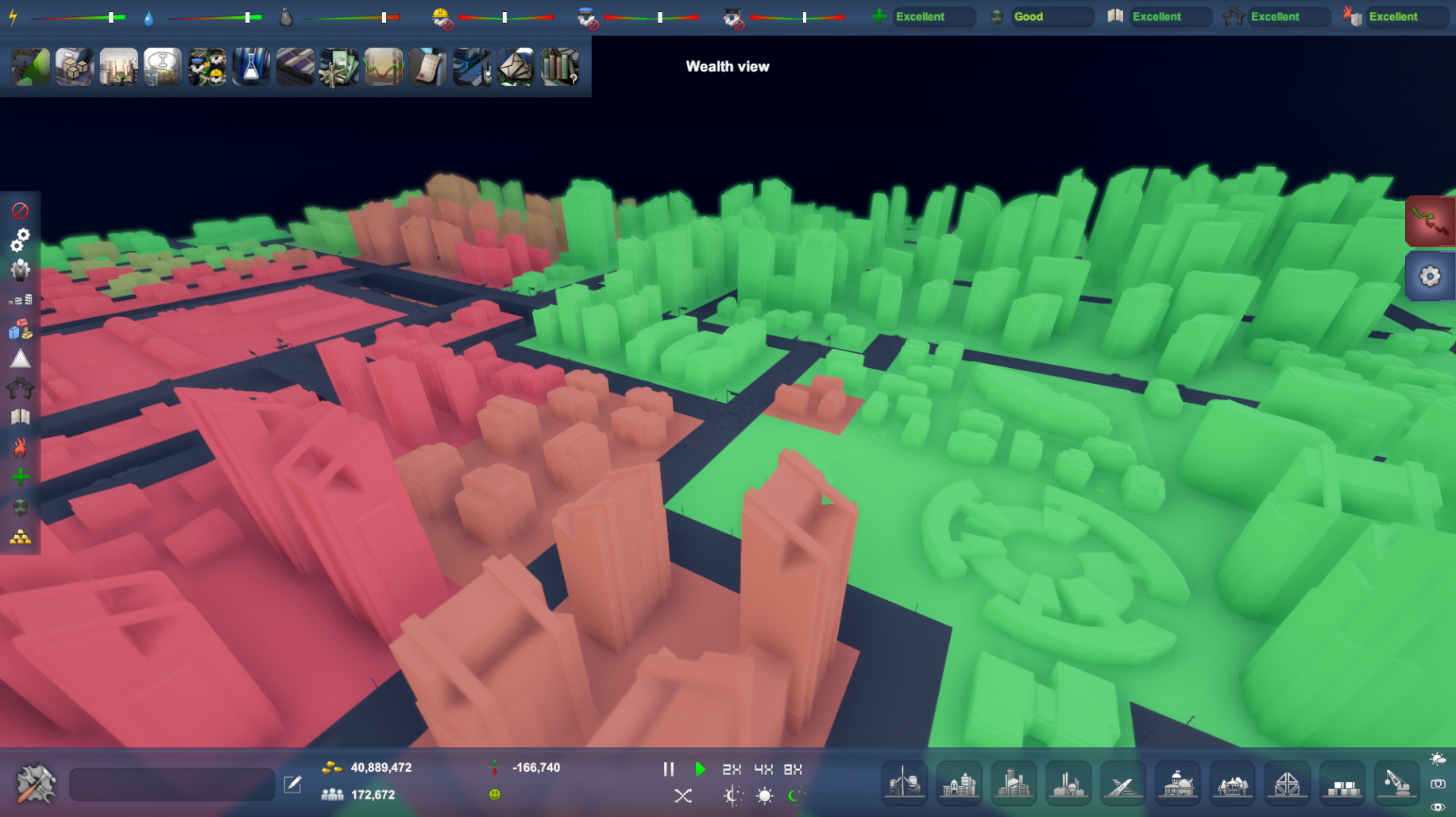 Advisors have been added. Currently they only discuss a handful of issues, but more help entries will be added in the upcoming few versions. This system will serve as a sort of tutorial for issues as they arise in a city. Advisors are available once a city hall is built. On the subject of city halls, from now on, only one city hall, customs house, national bank and lab is allowed per city. 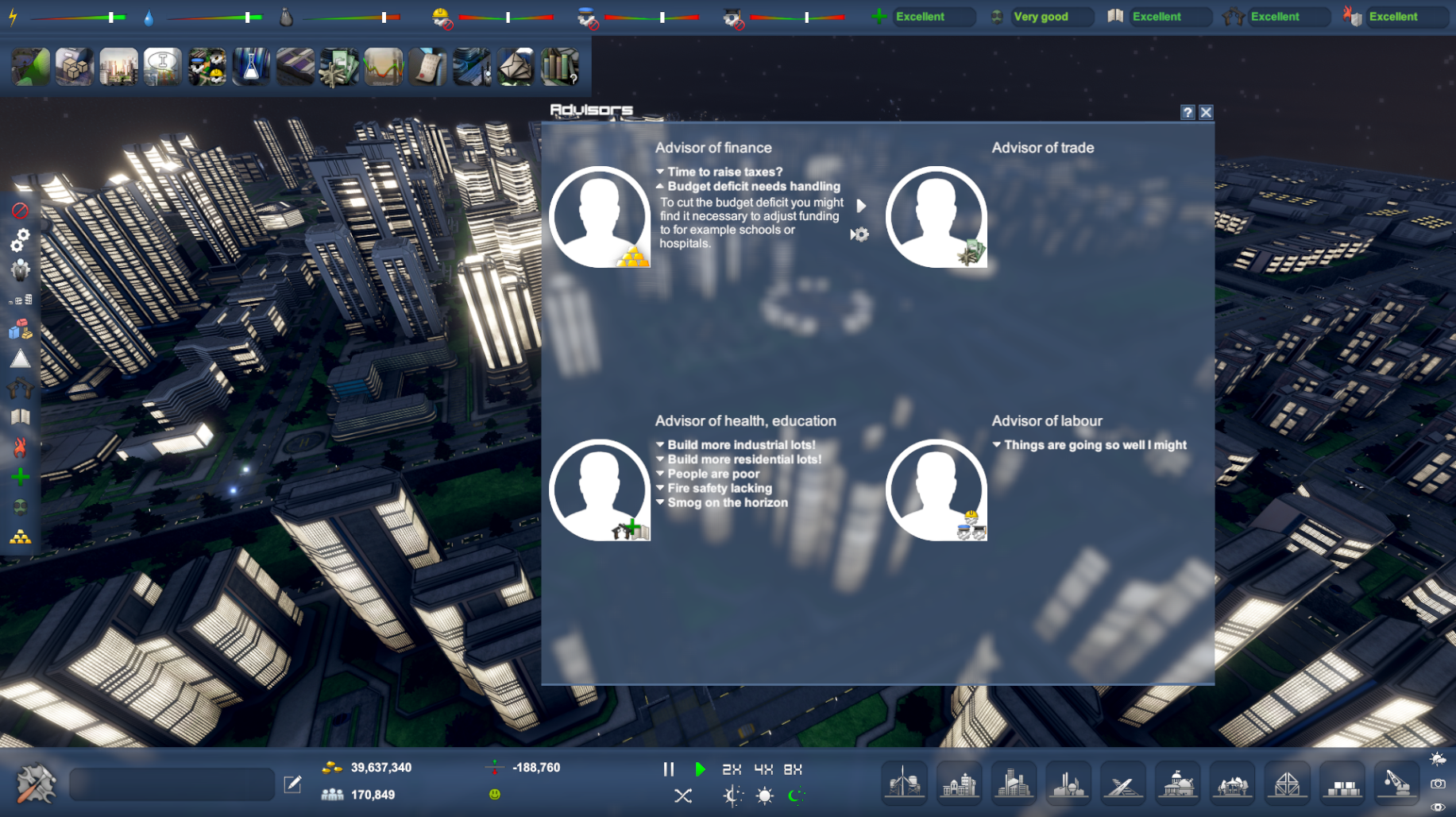 Similarly to advisors, but available at all times as long as population conditions have been met, is the system with citizen representatives. Currently, the implementation is very bare bones and you will only see the reps in the rep panel, but they will not provide you with any information. This system will be expanded upon in the upcoming few versions and finalized fairly soon. 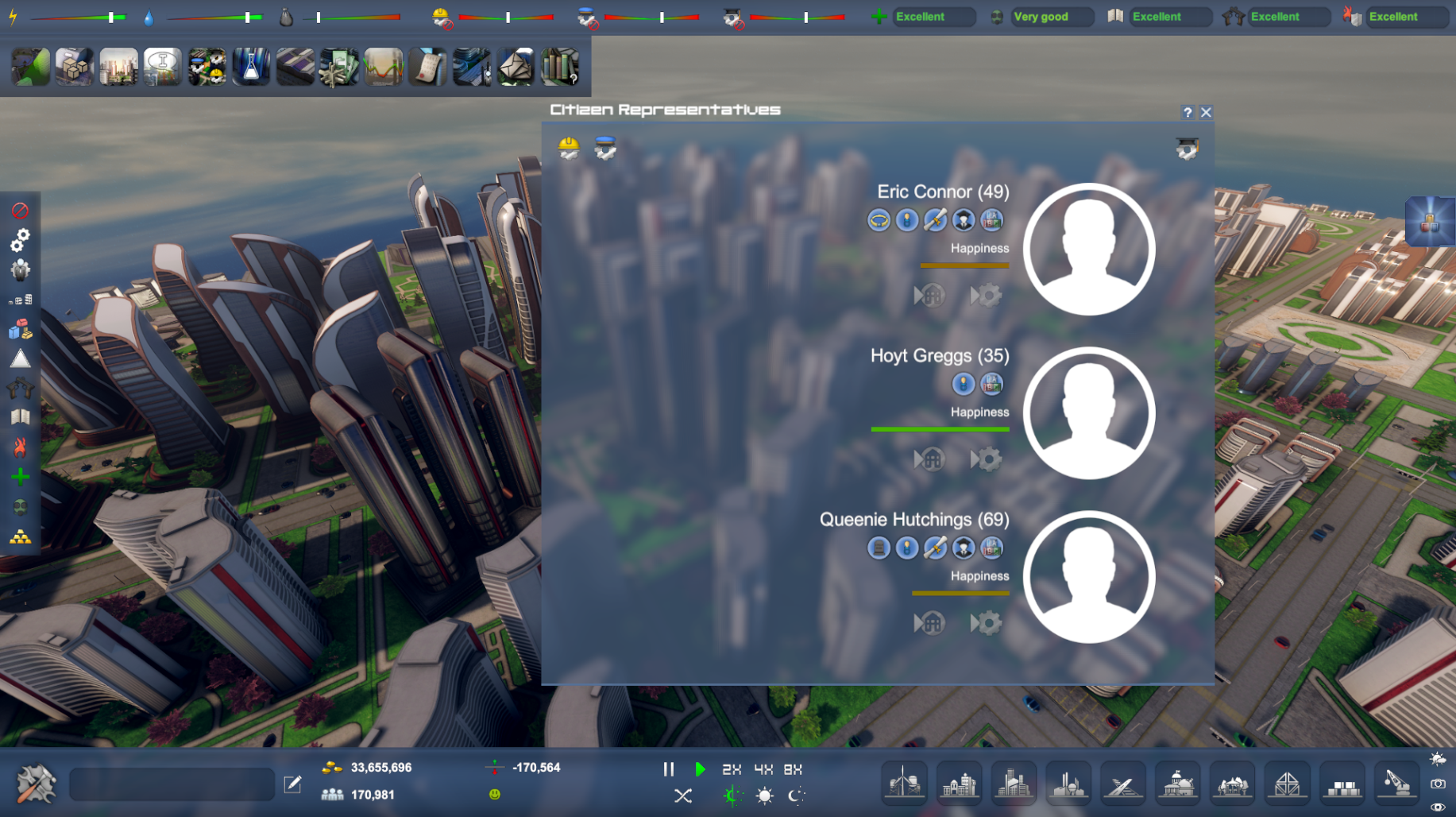 A smaller addition is that trade balance will now be displayed in the trade panel. For smaller cities this is not relevant, but once there's a large amount of goods moving in and out of the city, keeping an eye on the trade balance can be important as it will affect the value of currency, which in turn affects wages etc. 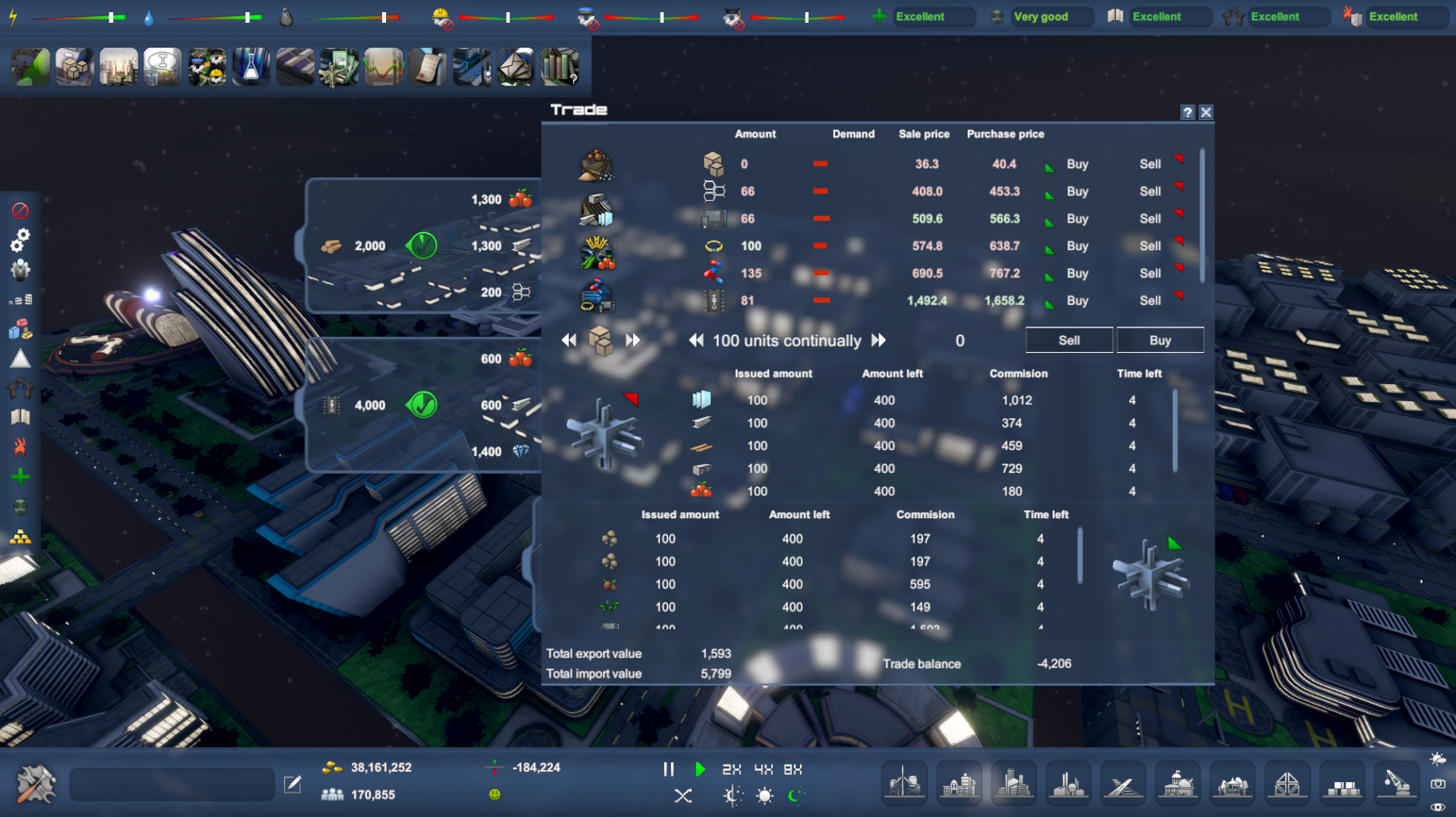 The upcoming few versions, aside from focusing on advisors and citizen reps, will be geared specifically towards QoL improvements, localisations and tweaking and improving the controls and adding more control schemes. These changes will be added into smaller updates released on a weekly basis, starting next sunday! 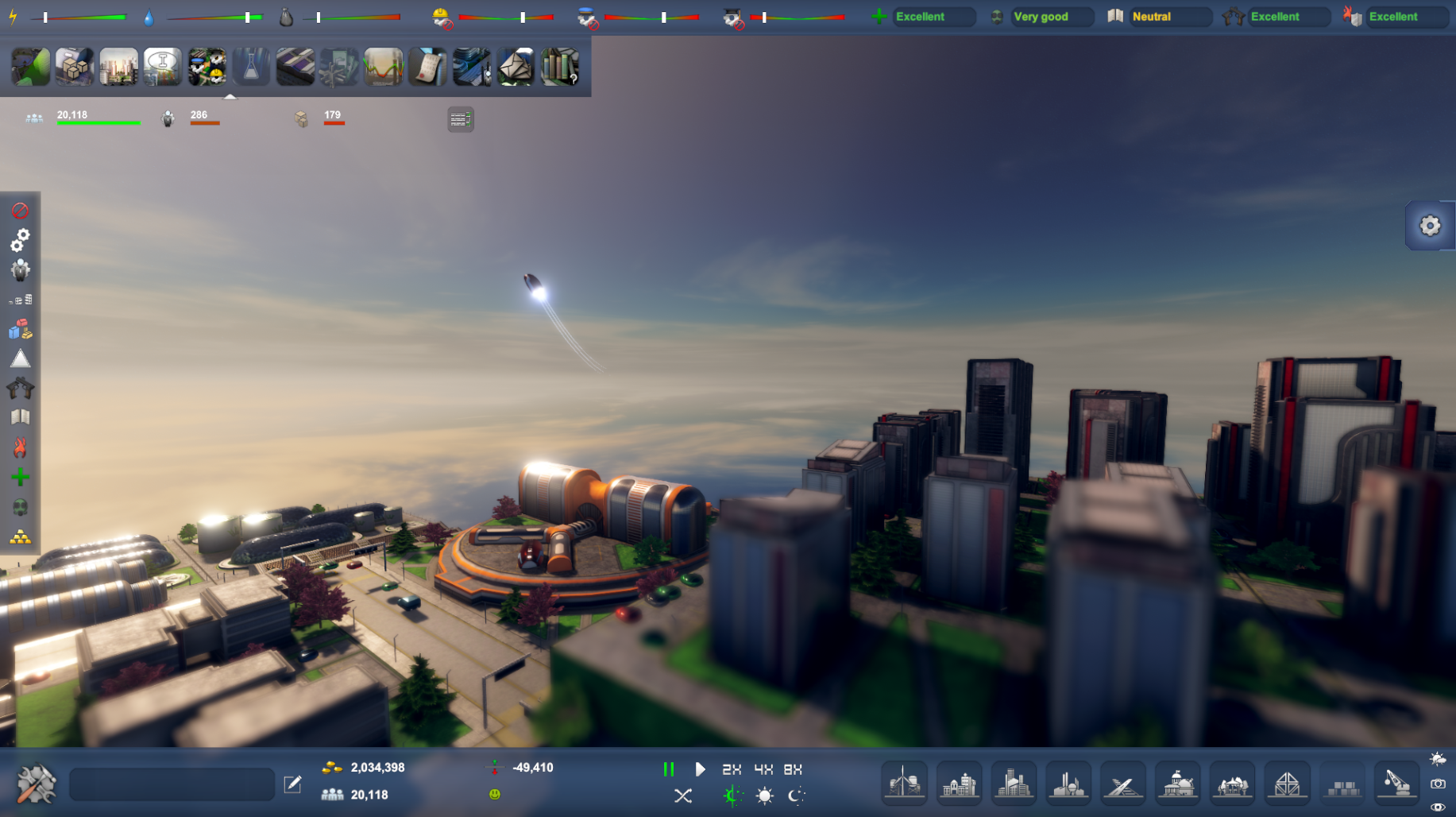