2052. The Gray Death epidemic is spreading like wildfire across the world.

Currently hiding somewhere in the American city of North Monroe, agent Ingram has to get rid of Powell and secure the ambrosia before it's too late.

Technically, yes: It's a mini-sequel to one of DXN's endings - combining new archi with hopefully more professionally rearranged assets from the original.

Larger plan (initial): Finishing the DLC, incorporating it into DXN, getting full voice acting for it, incorporating DXN-AE into DXN as a "Training DLC" (getting it voiceacted as well), finetuning and fixing the original DXN a bit, taking a bite out of a ham sandwich -> all this resulting in the release of Deus Ex Nihilum 5th Anniversary Update. 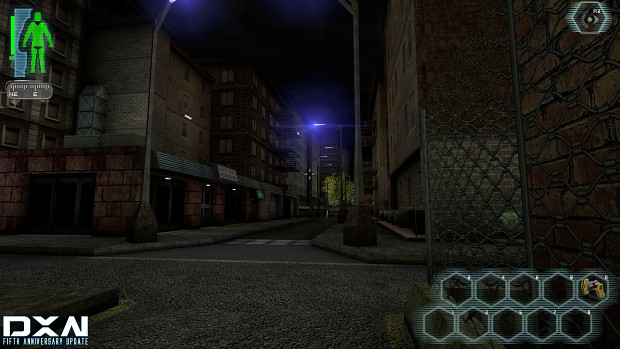 What? Tell us more.

I though this game can not be modded at all except very very minimalistic things. So I'm a bit sceptical...

This would presumably be DLC(an addon) for Nihilum, thus a DX1 mod, not DX2

Your such a tease man. An Invisible war remake in deus ex? Regardless I'm looking forward to what ever it is.

If someone will model me a ham sandwich, I'll put it in the game! ;]

I hope it has a ham sandwich this time :P

FGR is at it again, already making confusing statements in the pre-pre-pre-alpha stage of the mod/DLC's development! Sorry! Updated the newspost accordingly!

What?!? I thought you retired and went to cryonic storage, FastGamerr! ^^

I'm so glad to see you back.

Maybe you have no idea how much Mad Indgram made a lasting impression on me during the "Nihilum" Campain. I'd kill to play the loudmouth agent again. ; D

So best of luck in your endeavours.

Thanks, man! :] You will certainly get to play a Mad Ingram in this one, yes.

Looking forward to dusting this off again, especially with the new content...great mod :-)

Quick question: which ending does the Epilogue DLC carry on from? I'm guessing the "Sacrifice" ending, but just wanted to check ;-)