Dungeon Tactics 2.0 Development Preview #2! This developer preview showcases new features upcoming in the next version of Dungeon Tactics. Read all about the new attribute system and how it effects gameplay in the second installment!

Hello everyone! Today I am going to talk a little about Dungeon Tactics 2.0 attribute overhaul. As you know dungeon tactics 1.0 had 8 different attributes that governed every action you could do in-game; 2.0 doubles the number of attributes to 16. The new system was designed around a rock paper scissors ideology between ranged, melee, and magic; each weapon type is governed by it's own specific attack and defense statistics. Mobs with high melee attributes will be highly resilient against melee attacks, yet fall quickly against magic and ranged attacks.

Combat has been refactored to use the new attribute system. Internal mechanics are no longer d6 dice based, instead a mathematical equation using relative percentages between factoring attributes is used. The new system allows for any arbitrary numbers; while the old system limited statistics to numbers between 1 and 10, the new system will allow characters to have stats with no upper value. 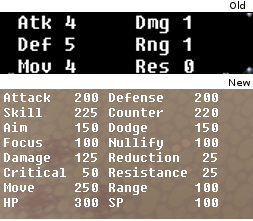 This new system brings huge changes to gear. All weapons, armor, and accessories have had their stats adjusted, and most items have been given three or more attributes. A sword for example might have +Skill, +Damage, and +Counter, while a bow might have +Aim, +Critical and +Range. Armors can give any combination of +Defense, +Counter, +Dodge, +Nullify, +Reduction, or +Resistance.

The attribute overhaul is only one of 4 major features in the new version of the game. In addition there is the interface overhaul (described in Development Preview #1), a new character progression system (which we will be talking about next time), and a revamped loot system. You can see how the new mechanics bring a lot of variation and flexibility to the game, and pave the way for a more satisfying and engrossing experience.

Keep an eye out for more news, I'll post it soon!