To start off, the the Allies and Soviets have both received a new epic tank.

The Allied Tank Destroyer is able to snipe tanks while staying out of their range of fire and just like a real sniper, it's able to destroy most of its targets in a single shot. Only bigger tanks such as the Mammoth Tank and certain other epic units are an exception to this; as well as the Heavy Tank which only just survives the first shot thanks to its 5% increase in health points. 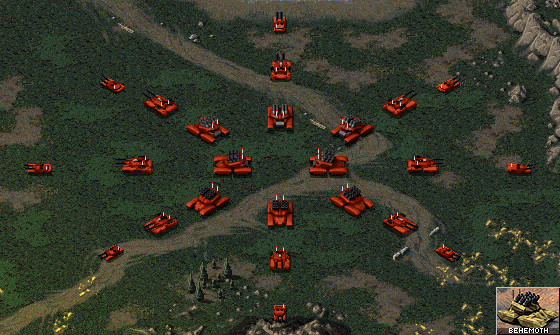 The Soviet Behemoth is even bigger than the Mammoth Tank and as you might have guessed, it also has tougher armor to match its size.
The Behemoth's napalm mortars are able to fry just about anything and surely make an invaluable asset for any kitchen.

Even aircraft can be targeted and although the armor plating of tanks provide some protection against the fire, the Behemoth is still quickly able to turn them into toast as long as it's able to keep them at a distance.

The naval balance has had some thorough improvements and changes again.
Some of the changes are the replacement of the Gunboat's inaccurate heavy-explosive missiles with accurate armor-piercing missiles and the reduced area damage of the Frigate and Missile Cruiser's heavy-explosive missiles, resulting in more balanced fights between large groups of ships of different factions.
Deploying the Laser Corvette doubles its firing range again and the Sea Shadow now fires arcing missiles which while being easier to dodge, are also more painful when they hit.
Allied Cruisers on the other hand, now only do half as much damage to ships as before. 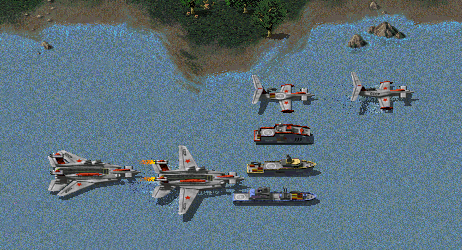 Naval yards will no longer be able to repair ships, but in turn all factions now have their own repair ship, visible on the right side of the image above (from top to bottom these ships belong to Soviet, then Nod, then GDI and finally Allies).
While identifying these repair ships, you were probably distracted by the big plane-like thing on the left. This is Soviet's new capital ship: the Ekranoplan Aircraft Carrier.
It does not replace Soviet's existing capital ship and unlike the Project 941, it does not have a build limit.
Ekranoplan Aircraft Carrier has similarities to GDI's Aircraft Carrier, but the range at which it launch its drones is shorter and it's able to fire Scud missiles at shorter ranges, making it far more effective against ships than GDI's Aircraft Carrier.
The Ekranoplan's wings also aren't for show: while the unit is still as slow as other capital ships when moving over short distances, its top speed will match that of a speedboat if it's given the time and space to accelerate.

Meanwhile on dry-land the Phase Tank is no longer buildable (in favor for the Tank Destroyer) and the Chrono Tank is a lot more vulnerable while deployed (but less so than when it's in teleport mode, where just 3 shots from a Rifle Infantry will already destroy it).

There have also been a few slight changes to some base defenses: Allied gun turrets will require 50% more power and their price has been increased from 600 to 700. GDI's Guard Tower on the other hand was given a 25% increase in weapon range to match the Allied Pill box, while the Advanced Guard Tower was made 30% less effective against infantry.

And speaking about infantry, Tanya now takes 2 shots to kill most infantry and her weapon range has been reduced by 15%.
In turn both she and GDI's commando now do a lot more damage to tanks when they become elite.
Volkov is also buffed once he becomes elite: he'll then be able to fully heal himself by simply standing on top of tiberium, ore, scrap metal or gems (yes, infantry can now finally walk over gems).

Still on the subject of infantry, the Spy is finally available as a buildable unit for the Allies. 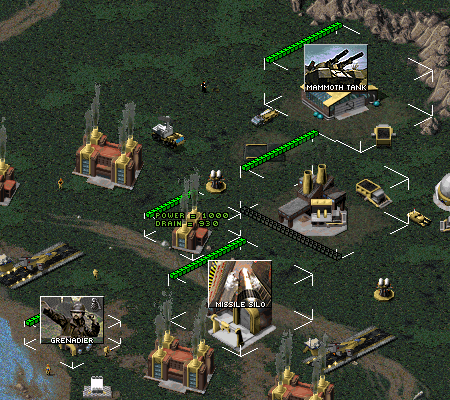 Thanks to the Spy's disguise, enemy human players are unable to distinguish it from one of their own rifle infantry and this gives it the ability to easily infiltrate one of their structures, providing intel that can be used to turn the battle in your favor if you use it right.

Depending on which structure your Spy infiltrated, you'll be given access to different information about the player who owns that structure:

And these are all the changes I'll cover for now, but you can look forward to some more information next week.

I wont probably become a fan of that soviet plane looking carrier ship. It feels unfitting visually to all remaining naval forces of the factions.

One aspect I did like about DTA is that you kept all official unit assets in game while expending upon it with own assets. I hope you will find an alternate use for the Phase tank or keep it all together. Kinda sad that Openra removed so many stock units. Don't follow in their footsteps.

We like the original units and also the original tech trees and aren't planning on removing units, nor altering the basics like OpenRA's stock mods have done.

However, the Phase tank was never buildable in the original Red Alert. It also felt like it clashed with our faction concepts, because we generally see stealth as more fitting to Nod than the Allies. Considering that, the Tank Destroyer seemed like a better addition to the Allied arsenal than the Phase tank.

The Phase tank also had a balance issue in that it felt quite OP when combined with Tanya. You still get to utilize that combination in the "River Raid" singleplayer mission however, so it could be said that we demoted the Phase tank to the same role that it had in original Red Alert: a special singleplayer-only unit.

Love all the unit designs, keep'em up!

OpenRA has all the units from Original game what are you talking about?

They are just coıntry specific so you don't get all at the same time, but they are there.

MusaphaTR: They lack several of the Addon units which were buildable.. Or moved units from one faction to another and called that improvement.. For example choppers for allies while soviets remain only with planes..Or as you mentioned some previously always build able units that are now country specific.
Not much of a difference balance wise though as they managed it quite well but sometimes I miss some of the units in my build tree don't you? :)

Openra is still kinda cool ofc. and so is DTA.

No addon units are missing on OpenRA, just some are subfaction specific. MGG and Fake buildings are also faction specific (but they are not addon unit) and Mechanic and MAD tanks aren't while being addon unit.

Unless you are counting Heli-carrier which was a last-time scrapped unit in Aftermath that works fine if you enable with Tech Level. OpenRA doesn't have that unit.

"A Refinery or Silo will show you how much tiberium or ore is stored inside."
Just that one ref/silo? I'd prefer to see a player's cash instead, either way.
Or just steal $5000 :D

Yeah, but the thief in Red Alert does almost that; it's just that the thief had absolutely no other use, so it wasn't in any other CnC game.

Does this mod work like twisted insurrection, where you don need a copy of the vannila game?

Never mind. I just found out it is
(I do this sometimes)

I don't like the change to Tanya. The commandos were never meant to be anti-tank anyway.

You need to get them to become elite first though and that can be difficult when you consider how fragile they are (they're far more fragile than any other special unit: a single V2 or artillery projectile will instantly kill them already).
So if you manage to keep them alive long enough to allow them to become elite, that surely deserves a somewhat significant reward.

Will there be new single player/campaign missions too?

Yes, there will be a remake of the ant campaign from Red Alert, as was stated in our previous news post: Moddb.com