The outskirts update is a significant change in how you play the game, allowing players to build outside the city, spending more time building and less time fighting.

The outskirts update is a significant change in how you play the game. It was mainly directly influenced by feedback we got from alpha players, that there's too much focus on walking around and fighting with your character, while not enough city building. I consider dream engines primarily a city-building game, above the action and exploration aspects, so I spent a hefty amount of time trying to analyze and figure out how we got here, and what can be done about it.

The outskirts is a step in the right direction. The main idea is that you can now build most of the buildings, including your industry, outside of the city (the 'outskirts'), and that you are now able to and even encouraged to take over additional areas of the map, build there, and defend those areas. The main difficulty we faced in that aspect is that every time you fly, you are forced to abandon a good portion of your buildings, which are built outside. So I had to re-balance the entire economy, making basic buildings much cheaper and easier to build, and made map stays longer, to make it worthwhile building outside, temporarily enjoying a stronger economy, and then scrapping some of these buildings before leaving.

This change also puts more emphasis on the need to balance between short-term, cheap constructions outside the city, which you benefit greatly from, but only for a short time, and building within your city or expanding it, for slower, but longer-term bonuses that stay with you forever. It was always our intention for you to make these kinds of meaningful choices, but it was somewhat diminished along the way, and I am happy that it is now much more significant.

As always, I'd like to thank all our early supporters and all of you who sent us feedback. If you haven't joined our alpha yet, check out our supporters page to find out more.

Note: Since the change is so significant, saves from previous alpha versions are not supported. If you wish to continue your old games, you can still play the older version by selecting Alpha 1 or 2 from the betas tab on Steam.

The outskirts - building outside the city

To make the city-building aspect of the game more meaningful and a part you focus more on, we needed to add more building space, and make the environment you build in have more impact on how you build, otherwise every game can turn out the same. Since the main city area is pretty much static, we turned to the outskirts - building outside your main city platform.

Almost all buildings and infrastructure (like rails) can now be built outside the city. The starting city area is now much smaller, each section you add is also smaller, but also less expensive and available earlier in the game, so long-term you can still achieve large city sizes and take more buildings with you, if you choose to spend your resources on that. Choosing which buildings to take with you when you leave is now a real dilemma, but you can move almost all buildings at any time, including moving them inside or outside your city, so your decisions are not permanent.

To support this change in gameplay, encouraging you to build more without having to feel too bad about leaving things behind (though you can scrap them and get 50% of the building materials back), we had to significantly reduce both the costs and effectiveness of production buildings. The basic production buildings such as wood-warpers, farms, flux vats and power generators are now much cheaper to build and to maintain, but also produce less (without upgrades). This encourages you to build and optimize the area outside your city, and take over & defend new areas to expand. Defense costs have also been reduced accordingly to make it easier to defend larger areas of the map. 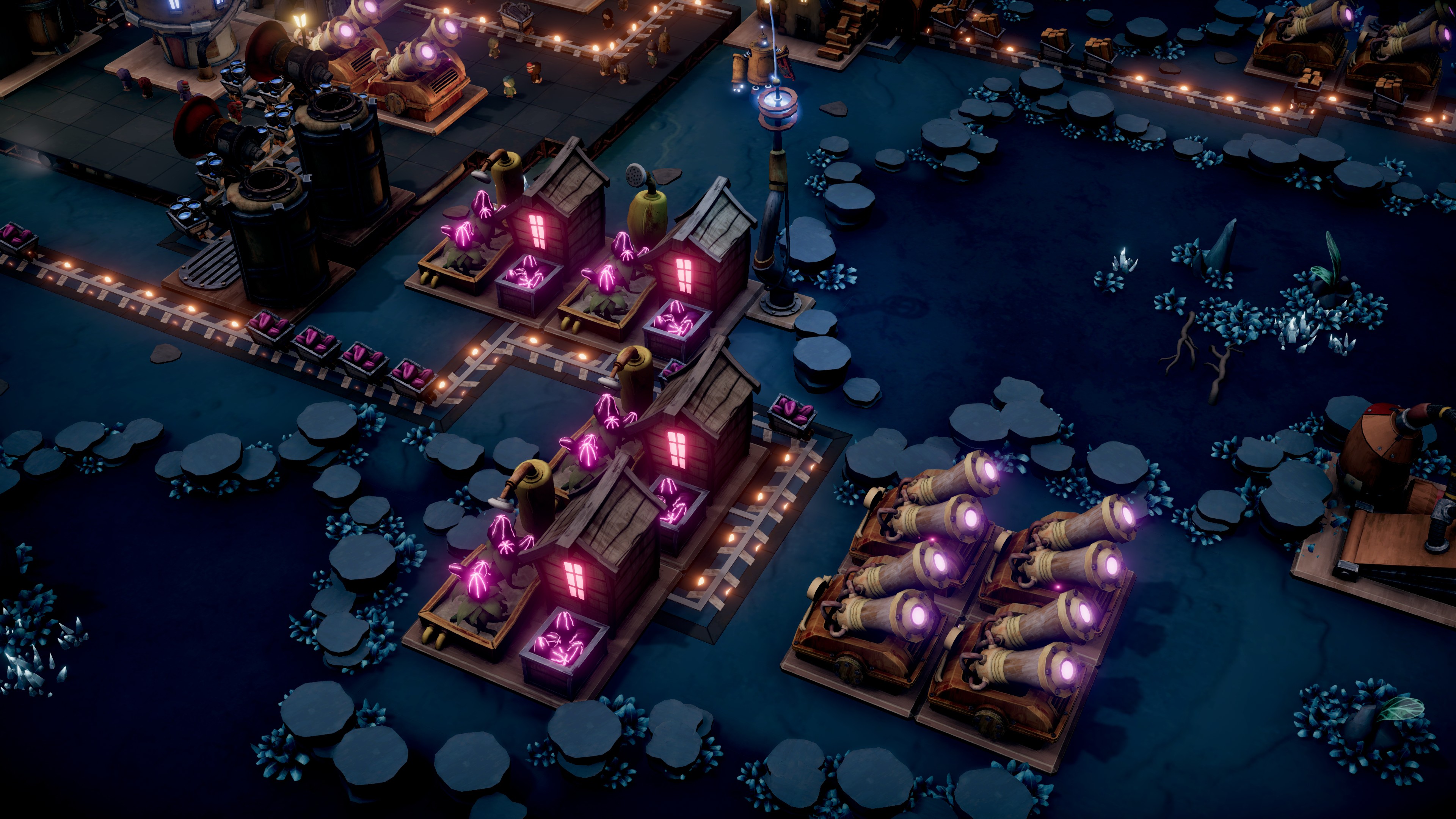 Our previous balancing was high-pressure & short-time, always giving you the feeling that you need to do something or be left behind. This created two problems with our new gameplay. One, you couldn't afford to spend a lot of time in the city building, planning and re-organizing, because you were always under pressure to explore and gather more resources. The other was that if your stay in each map is so short, then you aren't able to enjoy the benefits of what you build outside before you have to abandon it, and you can't exploit much of the map.

So, while we kept some of this pressure, and you still need to progress fast enough or be unable to handle the swarms of Drep (except in relaxed mode) - we did mellow it down significantly. We increased the amount of time that you can spend in every map before you have to leave. We replaced the 4-threat-levels and the extreme threat stage (which basically meant you had to go or die horribly no matter how strong you were).

Instead, threat levels are now a numeric value, starting at 0, and increasing as long as you stay in the same map. The higher the threat level, the stronger the raids on your city, but there is no hard limit in which you must leave, as long as you still have stuff to do on the map and the defensive capabilities to survive, you can stay. Once you fly away and land in a new map, the threat level will reset according to the new map's difficulty level.

You can now build harvesters from the start, and they are the only way to collect resources from the larger nodes, no more running around punching huge resource nodes. You can still destroy the smaller nodes for some extra resources.

Other than that, you can now build rails to send resources from the harvesters to your industry. Resource nodes also have a much larger yield, so they will last for a longer time, and once they are depleted, they still continue to generate resources, but at a much lower pace.

The resource elevator (renamed to resource drop-off) can still be unlocked to automate delivery of resources from harvesters to your industrial area, without having to build long winding rail tracks from faraway resources. It can now be built outside the city, or you could still build it on the edge of your city if you prefer. 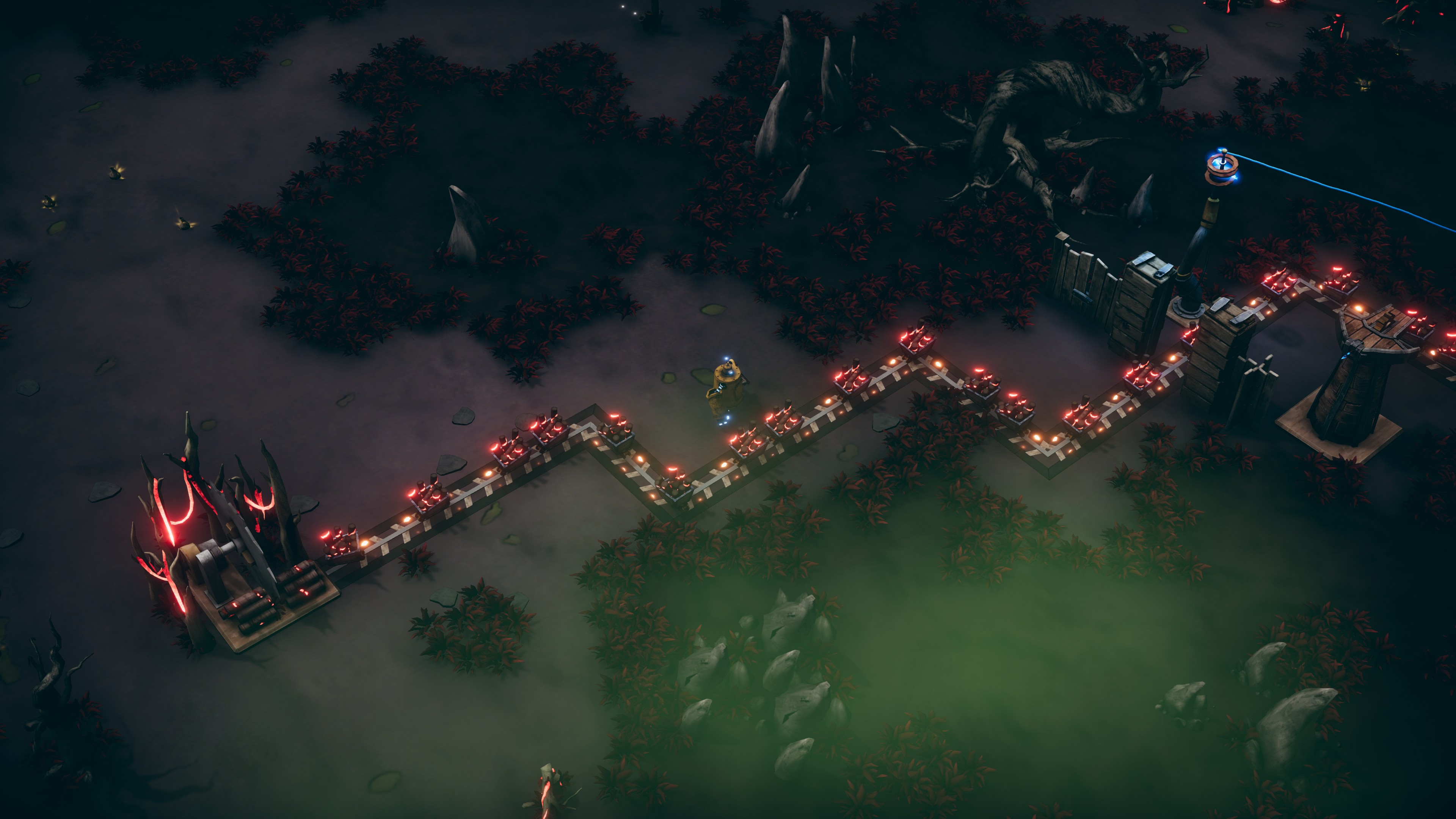 The map generation algorithm has been slightly changed, making most clearings smaller and having less exits. This means you will need to capture more areas in order to expand (since each area has limited construction space), but also makes them easier to defend. Resources are now also distributed a bit more evenly, and there are less of them (but they lost longer as mentioned before). 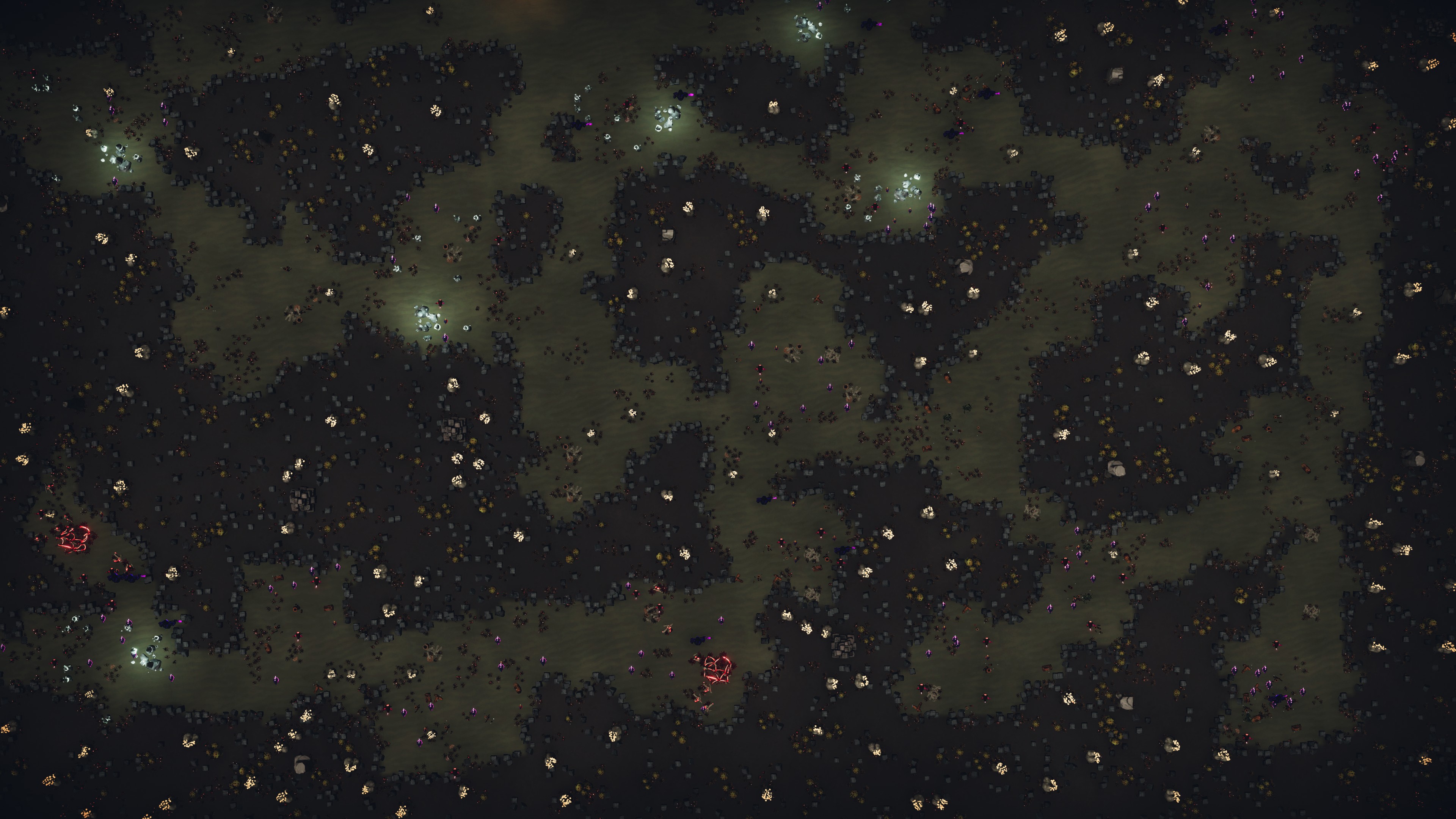 In the outskirts update, you can no longer carry raw resources with you when they fly (they are too heavy or volatile). So just exploring and collecting resources will not do you much good, you must have a strong economy to support a massive industry, and refine as many of these resources before you leave. Currently there is no storage limit, so the more resources you refine the more you can take with you when you fly away.

These include purptatoes, raw copper, bloodwood logs, and raw featherstone (which you can now refine).

Building add-ons are a new mechanic. They work somewhat similar to upgrading building levels, but they are not linear and their effect is usually more significant than just increasing production.

The flux vats and power generator are now very cheap to build and produce a much smaller amount of flux/power, but their basic recipe no longer requires any raw materials, so you can just build as many of them as you can afford outside the city. In the long-term, however, you want more productive buildings to take with you, that use less space in your limited city area. So both the flux vats and power generators have add-ons that you can unlock with research, which allow you to use more advanced recipes (using Star-Tar and other new resources) for much higher productivity.

These add-ons are much more expensive than the base building, so they are more suitable for long-term factories that you build in the city and take with you.

We've added a few new buildings, such as the Stone Worker to process featherstone, and the Atmospheric Condenser that generates a gel substance from smoke, and can be used in more advanced power and research recipes. There's a new long-range power hub, which generates a power area around it, allowing you to build outposts without having to connect them to your main city via a vulnerable line of tesla towers.

Another new addition is a building repair kit, a consumable that lets you repair all buildings around your character, useful in a tough fight.

If you have any questions, join our discord and chat with the team!