In this update we talk about our decision regarding publishers, our new mech design, active abilities, we show our new user interface, and some plans for the future.

Gather around, we have a few new stories to show and tell, from our latest work on Dream Engines.
Remember to sign up to our newsletter so you can be the first to hear when we start alpha testing. We'll be sharing those plans in the next couple of weeks.

What we've been up to lately

Since our last update, we took some significant steps in the visuals department, getting ready to produce our first gameplay trailer as we prepare to start an alpha period. We also, as always, continue balancing, tweaking, and adding new content and systems. Keep reading to hear more about some of the larger changes and challenges we faced recently.

Ever since we announced Dream Engines, we have been contacted by a fair share of publishers and investors, some large and famous, others small and boutique, asking whether we were interested in working with them. Some of these offers seemed like both sides could benefit from a partnership, and we seriously considered these options.

Being able to focus on development and having to worry less about marketing and business development would have been very nice, but as everything in life, it comes with a price. Not just a monetary price tag, but also some loss of flexibility and control over what goes on with our game, among other things.

In the end, after serious considerations and discussions, we've decided we'll be self-publishing Dream Engines like we did with our previous game, Judgment. We'll probably need to hire some help with marketing, but I believe this is the right course for us, given all considerations and offers on the table.

Not exactly an update on the game development, but this is something that I've been spending quite some time and mental resources on lately, so I decided to share. This also served as a motivating factor for us, because many of the organizations we've been in touch with received a build of the game and liked it enough to want to invest in it, which is a good sign that the gameplay, though far from final, meets the expectations.

Designing a mech that would serve as your main character was a struggle. As a small team, our resources are limited, so we wanted something that would be visually appealing, but not require too many resources to manage and animate. We also wanted it to support our wacky, steampunkish style. This is what we eventually came up with.

This design allows us to replace the mech's arms, according to the weapons you have equipped, and it allows for whimsical movement animations. I hope you like it, let us know what you think.

To make combat and character building a bit more interesting, we added a new system for active character abilities, abilities that you can trigger manually when you choose to. In addition to the repair kits (aka med-kits) that we had from the start, we now added a system that lets us add any kind of active ability, each with its own audio, visual effects, and gameplay mechanics.

There are currently two ways to gain active abilities. One is through consumable items that you craft or find, and that you then spend to activate the ability. Repair kits are a great example, but we also have a decoy to attract enemy fire, an AOE attack, and more. The second option is to acquire abilities through our infrastructure upgrades (similar to a skill tree in RPGs).

Both types have a cooldown, and I am still considering whether to add a way to limit the latter through some kind of mana-like mechanic - an energy bar that charges over time and is required to use abilities. This limitation can help balance but also add some interest into character-building and lead to interesting ability-based builds.

Up until now our user interface was something temporary that was quickly designed internally. While we have two talented artists in our team, none of them specializes in user interfaces, so we kept it minimal and functional. This is the main reason we rarely shared user-interface elements in our screenshots and videos.

In the past month we've worked with a graphic designer that is experienced in user interface design, who finally helped us achieve a properly designed UI - both functional and visually appealing, and we can finally share it in our screenshots.

We're also changing the way our research tree works, replacing the list of currently available techs with a proper tree, so stay tuned for some more updates on that soon. 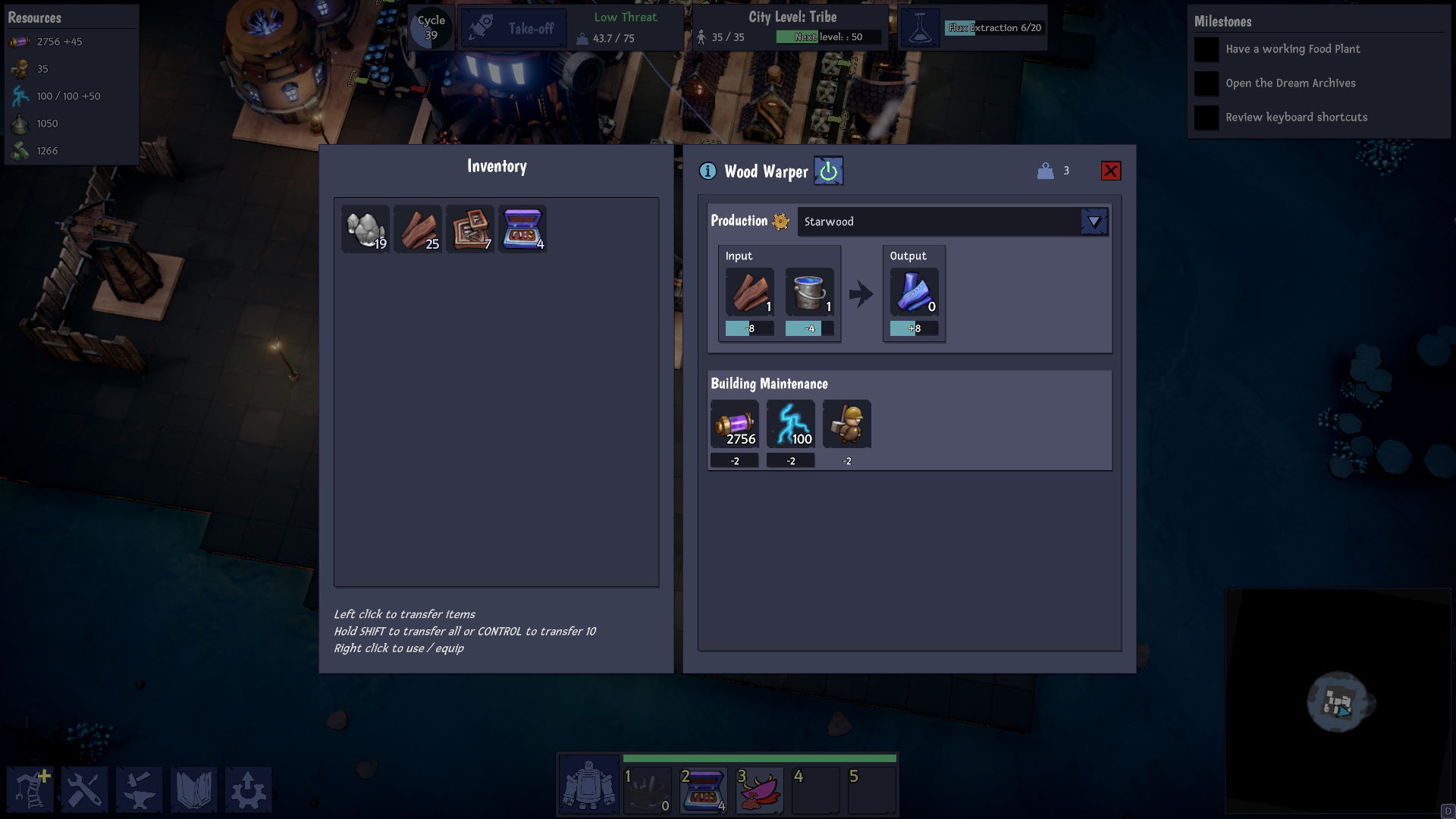 One of the gameplay / balancing challenges that we've been facing is how to make attacks on your city interesting and tense without becoming too much of a chore. We want to keep players on-edge, we want you to worry about the safety of your city, but we also don't want you to have to micro-manage and manually defend the city with your mech character.

We took several steps to improve this aspect of the game. First, we removed the progress bar that previously showed exactly when an attack would happen. Adding some uncertainty encourages players to make sure their city is always defended. There is still some advance notice so you can prepare, but you don't know exactly when it will happen.

Second, we reduced the amount of attacks, but made them more meaningful. Each attack will now consist of several waves one after another, instead of a single group. Just making the attack stronger would break the balance, but making it stronger while also spread over a longer period of time makes the attacks more meaningful without breaking the balance. If your defenses are too weak, the damage you will suffer will be more significant, because the first few enemies will weaken them and the second wave will wreck havoc. On the other hand, if your defenses are powerful enough to handle attacks without taking too much damage, then additional waves will not make them more likely to fall.

Last, we worked on balancing and tweaking the defenses. Mainly, we made them a little less expensive and decreased their weight, allowing you to build more of them in the city that would move with you as you fly. 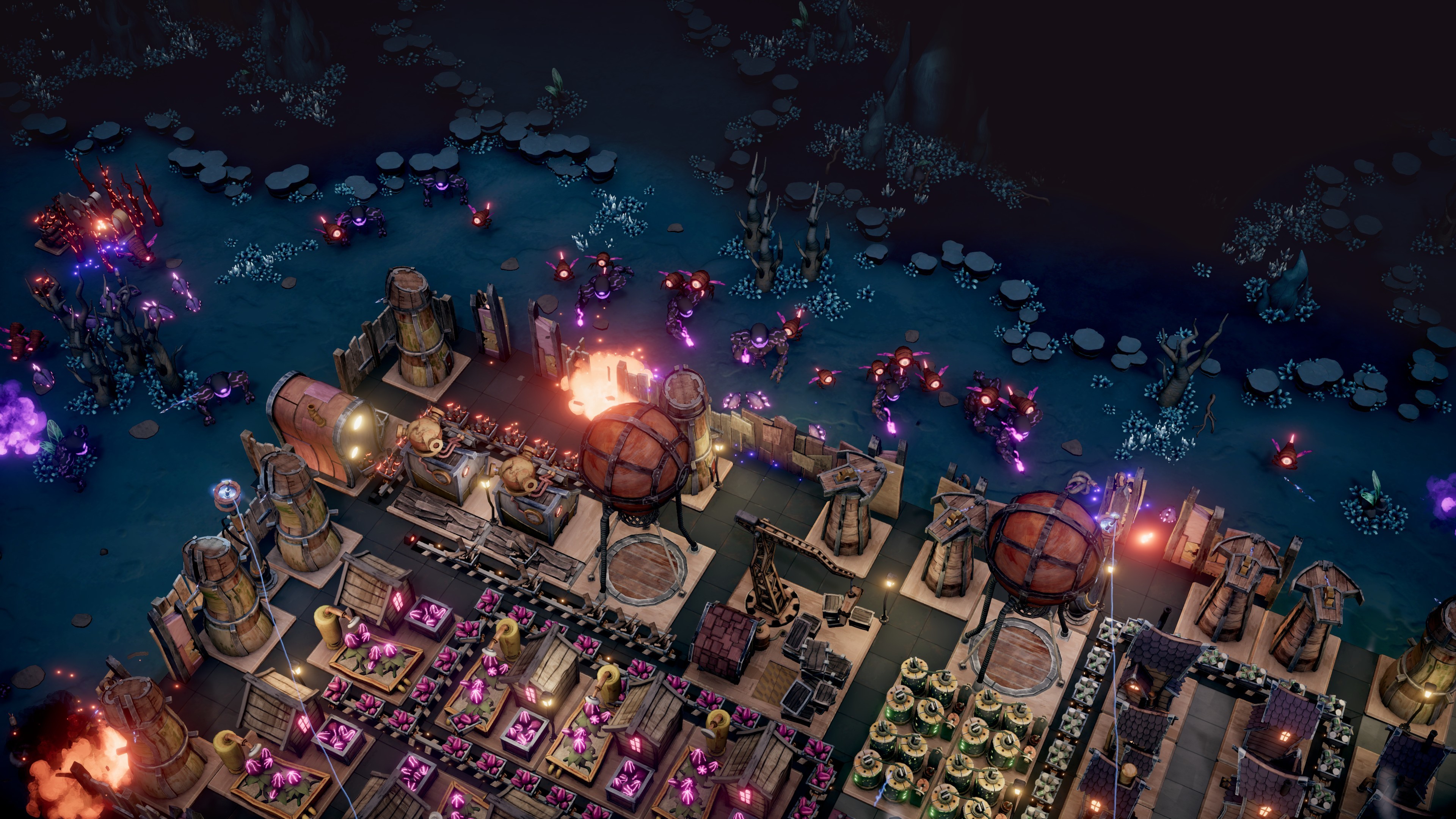 We're keeping the enemy AI fairly simple, but we did make some significant improvements. Before, the enemies raiding your city would follow the path towards the city core, and attack anything that enters their attack range. You could attack them from outside their range and they would just move on. Now, enemies will move as a group, slowly, towards your city so the fast enemies won't arrive before all the others. In addition, they have an "aggro range", and if a target (building or unit) moves into it, they will break up, chase, and attack that target. This also adds the need to defend any resource collectors that happen to be on near the raiders' path.

We also added some additional tweaks and improvements, including many performance enhancements so we can support more enemy units on the map, and improved the behavior of the wandering enemies. There's still more we can do and plan to do with the AI, but we aim to keep them fairly simple for the most part, with predictable behavior that you can learn and adapt to. The challenge comes mainly in their numbers.

This covers some of our more significant changes and challenges we faced since the last update. Of coruse there's plenty more that we've done in the past two months, but this post is already long enough.

As for what's next - stay tuned, and in the next few weeks we'll let you know of our plans to start alpha testing. If you'd like to take part, please sign up to our newsletter, that will be the best way to remain appraised of developments in this area.

The new mech design is adorable.