Latest news from DreadStar's development, retro-styled rpg shoot'em'up. Insight from game development challenges and how game and level design influence enemy creation. New visual previews for enemies / bosses and some other news as well. Check it out!

Posted by Augmented_Irreality on Dec 6th, 2016

DreadStar: The Quest for Revenge is a retro-styled shoot'em'up with rpg elements such as leveling up, skill points, inventory and equipment systems. It features pixel art cutscenes, ZX Spectrum and Atari-ST music to go along with a fast gameplay, big boss fights and exciting replayable levels available in 3 different difficulties.

Check the trailer out


Now for the fun part: the devlog. We're going to be talking about how the game design and the level design changes enemy patterns and behavior based on what we want to achieve. 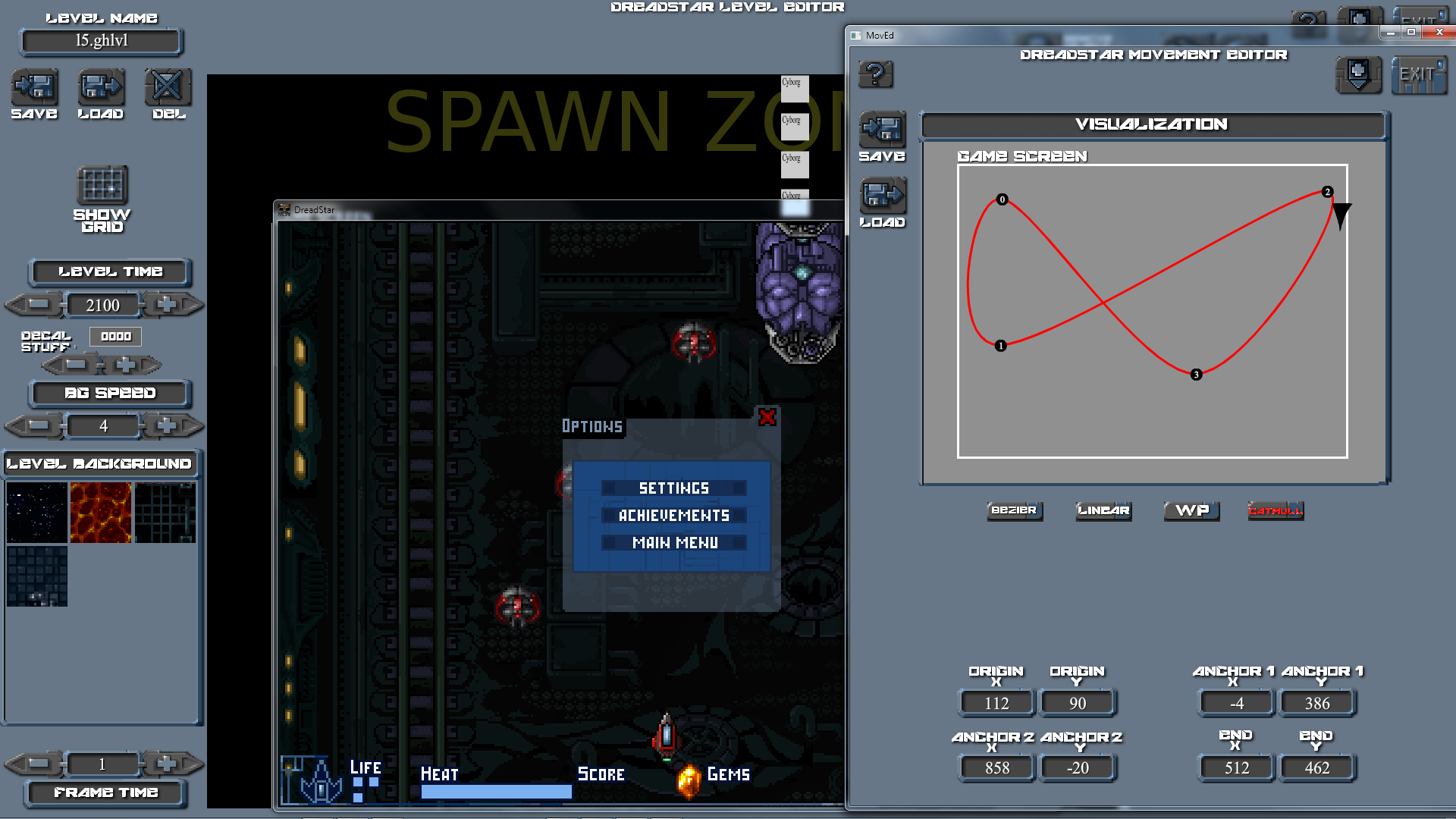 In DreadStar, we chose to set the levels in distinct places (space, an invaded planet, an abandoned temple, a robotic IA complex, etc.) and the visuals already give the levels a strong sense of identity but we wanted them to "feel" different as well, when you play them.
To achieve this goal, we decided that each level would play differently and that means that the enemies need to act a different way.

The first available level is pretty straightforward, space invaded by pirates that must be taken down. Most enemies go forward, some of them firing , others don't. To still have an interesting level, some enemies are faster than others and some fire targeted bullets toward the player ship. As in most shoot'em'ups, we included a midboss to break from the monotony and add a sense of danger. Both the midboss and final level boss are simple in their patterns and don't go overboard. Think of this level as an introduction to the game's mechanics. 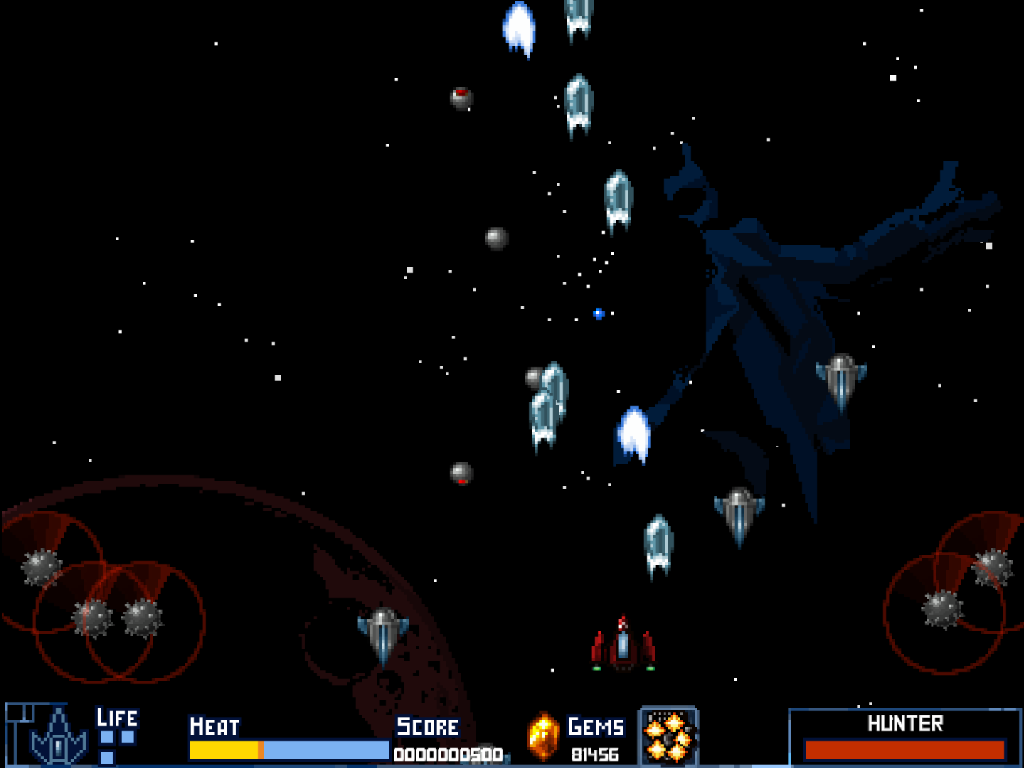 The second level is very different and is situated in a robotic complex home to a deadly AI that rebels against its creators (humans!). The visual setting being cold and mechanical, the enemies needed to be as such. Since it is the second level, we also decided the enemies would have much more movement and so it was only logical to use mathematical patterns in the movement of the enemies (such as sinusoidal movement (sine and cosine), circles, and that kind of AI type of logic). Less enemies are firing but they are trying to directly hit the player ship, sacrificing themselves in the attack. This level has 2 midbosses and 1 boss that consists in 2 different parts. 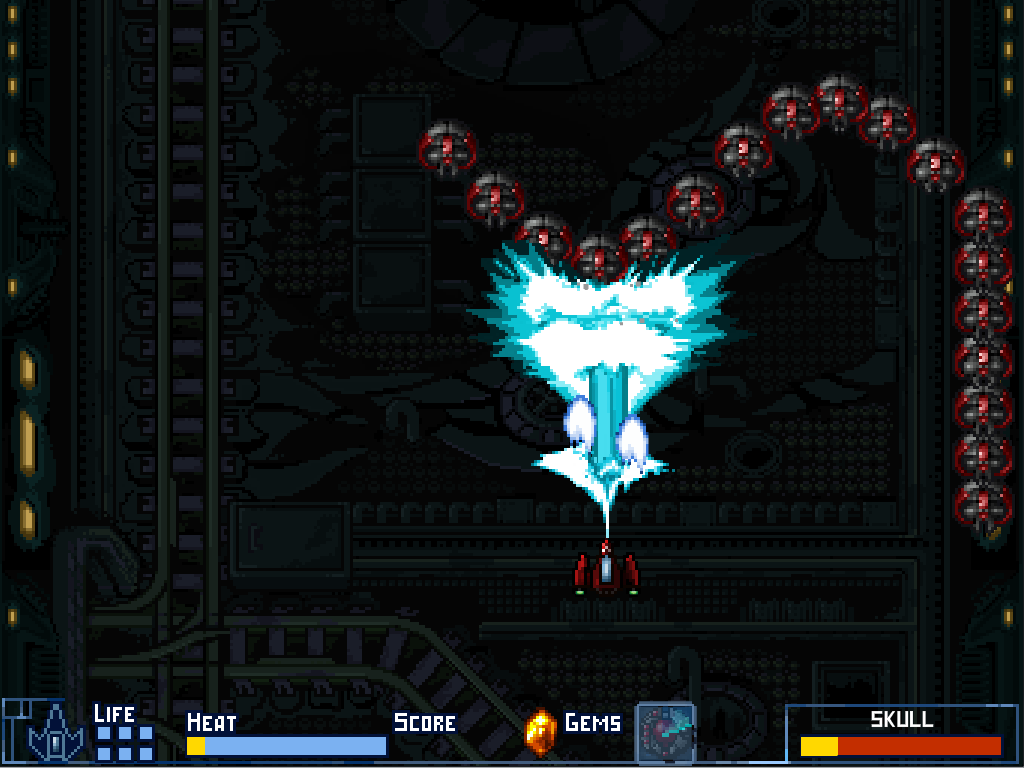 The third level is a bit less interesting, design-wise, since it consists in an asteroid field that is generated using a pseudo-random algorithm. Since it is an asteroid field, it didn't really make sense that the level would always be the same. Therefore, we decided to create an algorithm for randomly spawning asteroids, using several constraints so that the more you advance in the level, the more asteroids you'll encounter, with higher chance for bigger, slow asteroids (with more hit points) and tiny, faster asteroids (less hit points but harder to avoid). There is no midboss for this level. 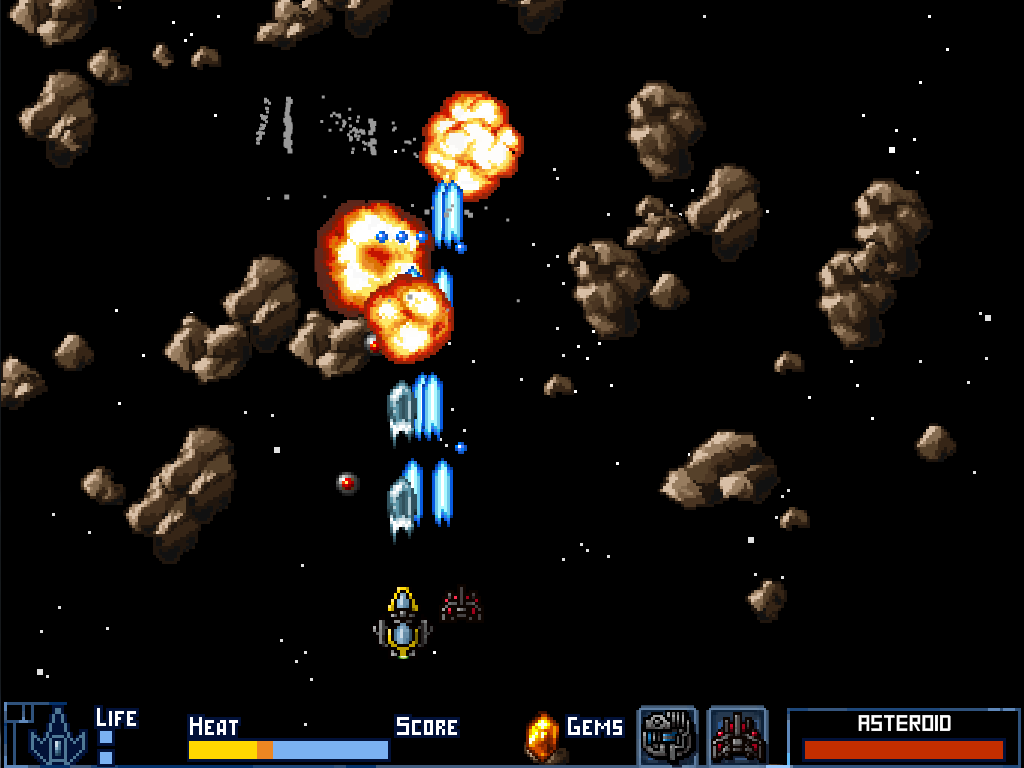 The fourth level was very fun to design as we kind of went overboard with silly ideas and themes. It is situated on an infested planet where the inhabitants have woken up an ancient race of alien-like parasites. You must now save the survivors by eliminating the infesting aliens and the corrupted humans that have fallen prey to them.

In this level, we went for classic shoot'em'up planetary elements: enemies that can be hit by bullets but don't damage the player's ship when you hover over them. They are on the ground and therefore represent no threat to your ship. To counter this fact, however, they shoot at you and killing them will make avoiding being hit much easier. For the rest of the enemies, we have a mix of what was available in the first 2 levels, each with their own movements but overall based on the same kind of ideas. The midboss is an enemy generator and will spawn more enemies (forcing you to manoeuver in order to be able to hit it) and the final boss is, again, a 2 part boss that will probably surprise the players (we won't be talking too much about it to keep that intact). 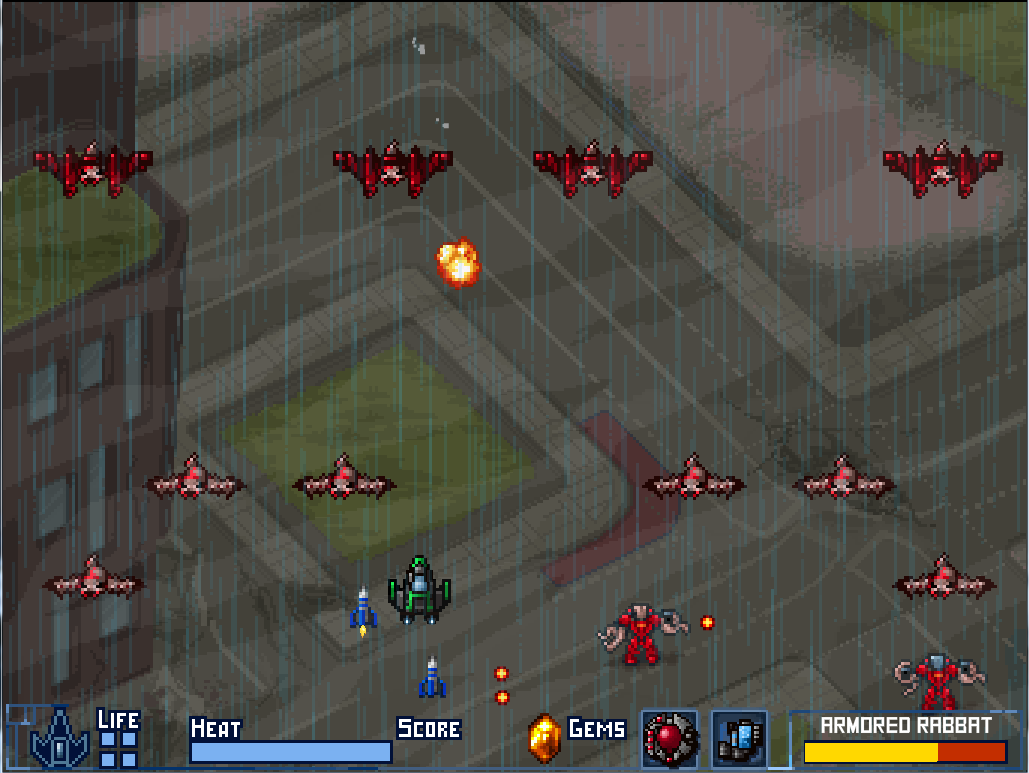 Finally, the fifth level is an abandonned temple, in a derelict space station. The level's graphic design draws inspiration from ancient cultures with a mix of alien technology. To give a sense of size and emptiness, this level has no "enemy" but rather obstacles that you will have to avoid. This level has been designed with a key feature in mind: it plays like a race. You will encounter speed-up and speed-down bonuses that will make it harder or easier to navigate through the giant crumbling walls, flying platforms and tunnels that make up most of this enemy's level. Your score will be higher if you finish the level faster.

The midboss and the boss for this level use magical attacks and will require a lot of movement from the player in order to kill them. 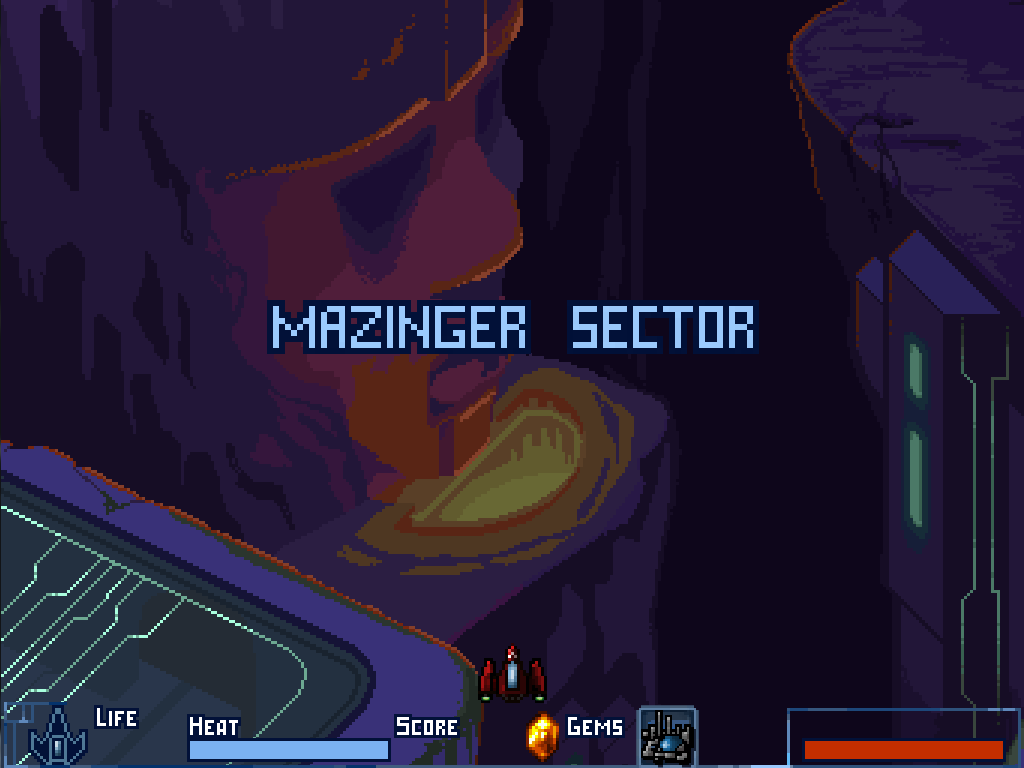 So, as you can see, the enemies were all designed with a specific goal in mind, adding to the level's atmosphere and giving it a sense of purpose.
We have also used background elements to help the player remember when a boss will soon be incoming and the different parts of the level.

We hope you found this insteresting and thank you for reading up to this point.
The game is slated for a first half of 2017 release.
The alpha demo is still available on GameJolt and Itch.io !

Stay tuned for more and in the mean time, don’t hesitate to check Augmented-irreality.fr to read our devlog!