It’s been one full year since our successful Kickstarter back in April 2014. So much has happened, so many things have evolved and we’re happy to share all of the latest and greatest updates with you :D

Thank you so much for all of your support! It’s been a great first year, and with your support, Dragon Fin Soup is almost ready to be served! To show our eternal appreciation we are giving you this brand new, HD wallpaper painting by our one and only Randis Albion! 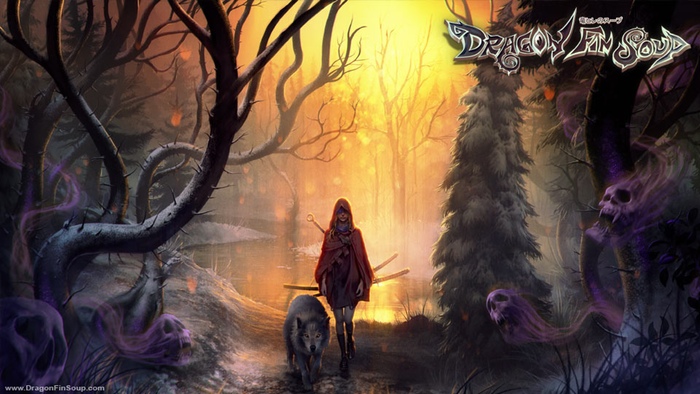 We’re happy to share that we are now doing internal BETA testing for Dragon Fin Soup! What the heck does this mean you ask? It means...

You’re probably wondering a few things like “When is Dragon Fin Soup coming out?” or even better “When are we getting our backer goodies?” and of course “When is Closed BETA?” Find out below! 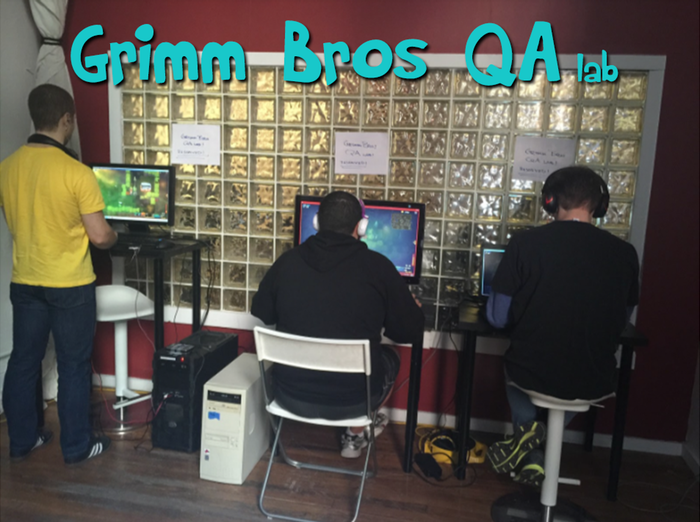 Welcome to the Grimm Bros QA lab. Here, we have genetically engineered college students to sit in front of a computer for hours on end making sure that Dragon Fin Soup is the greatest, most epically badass experience possible.

As we mentioned previously, Dragon Fin Soup is now content complete! What does that mean you ask? It means that the game is 98% complete, and all the main features are in! So why hasn’t DFS launched yet? We want to make sure that our baby is as polished and perfect as humanly possible, so we have a bunch of Production/QA interns hammering away at the Philly Game Forge - finding and squashing bugs, helping us balance the game, and make sure DFS is a fun experience.

As of today, our QA team have been playtesting DFS daily for several weeks. The QA team has only been testing Survival and Endless Labyrinth, so Story Mode will be up next. So far they think the game is challenging, fun, and very good looking. Oh, and they die a lot :D

Regarding a Closed BETA

Being as straightforward and transparent as usual, here’s the deal: We’ve determined that we won’t be able to have a Closed BETA for DFS as we had initially hoped.

There are several reasons why unfortunately, we choose not to conduct a Closed BETA.

We are currently focusing hard on completing the game. We’ve said it a few times and its part of our core values - we want to make a great game, and to do that, all of our resources are dedicated to completing the game, QA testing, and preparing for launch. However, we may put together a PC demo before we launch, and if so, our backers and supporters will be the first to get their hands on it.

Now, the question on everybody’s minds... When do we all get some of that delicious, spicy, chunky Dragon Fin Soup?

We want Dragon Fin Soup to be fun, exciting, and most importantly, complete. So in the spirit of indie game dev, the game is “done when it’s done.” We do not have a hard release date yet, so if we feel that DFS needs more polish or we find new bugs, we may take a bit more time. We will of course keep you all informed about the developments. We have also added additional unannounced features to the game, which is part of the reason things are taking longer than originally planned. Plus, we need to ensure DFS runs well on every platform!

Fortunately, our estimated release date is sooner rather than later. After we have a final game build that we are satisfied with, we submit it to Sony and Steam, and off it goes to your Computers/Playstations! Tentatively expect Dragon Fin Soup initial staggered launch starting this Summer, 2015. Stay tuned for more details on official launch dates and platforms.

Backer Rewards - AKA Where is my Stuff!

Backer rewards will be sent out ASAP, hopefully in tandem with our launch. We have almost all of the specs and info we need, and the orders are ready to be placed, its just that right now we are pouring all of our time, effort, and resources into making the game great. We deeply, deeply, sincerely appreciate your understanding and patience with us as we work hard to make Dragon Fin Soup the best experience possible. 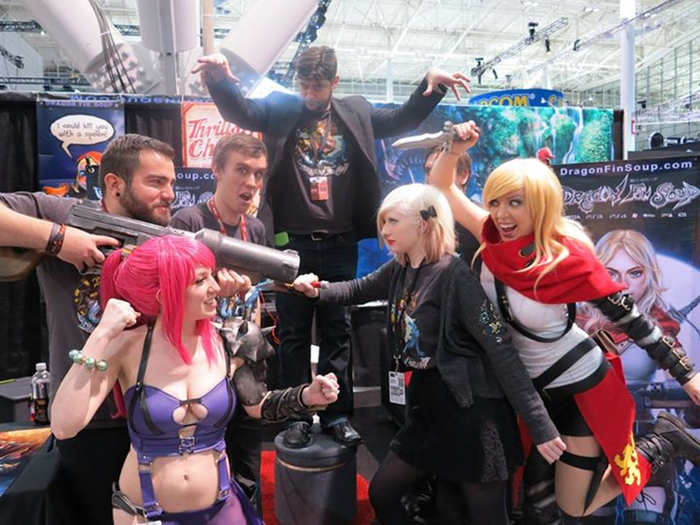 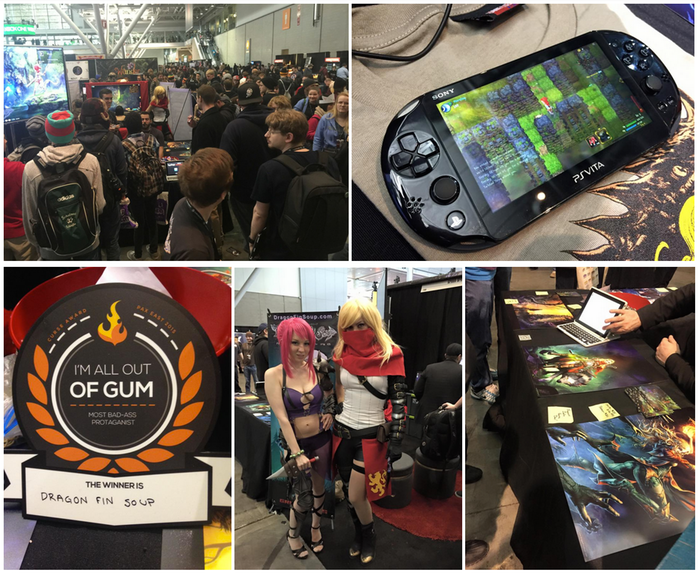 Last month we were at PAX East for the 2nd year in a row, showing off our baby Dragon Fin Soup!Boston was cold and full of drunk people with weird accents, not including our team. We came into our 2nd year at PAX East with a brand new, larger, bigger, faster, stronger, more badass, booth, and lots of goodies to go with it. We shared a new DFS HD video teaser trailer (soon to debut on PS Blog), 3 new high quality art prints, 2 awesome cosplayers for both Red Robin and Morgiana, PS Vita, PC and PS4 Demos of DFS, new t-shirts for sale, buttons, and lots of fun.

To see our full album of our PAX East adventures on FB, click HERE!

To top it off, we even won an award from Curse Gaming for “Most Badass Protagonist”! 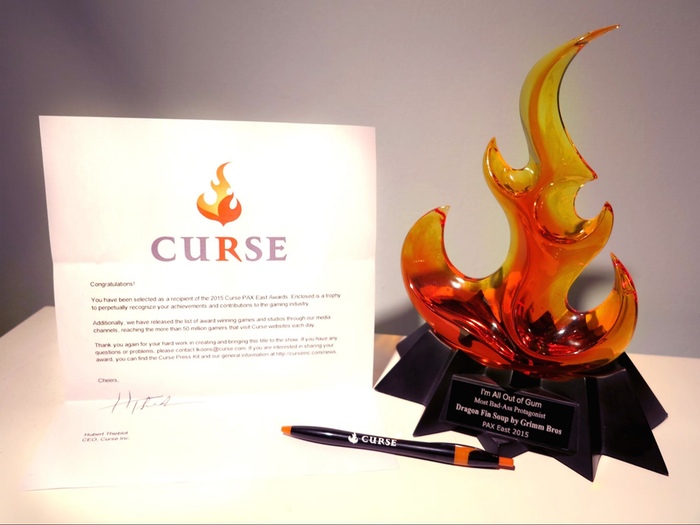 As mentioned above we premiered 2 new art pieces from Randis in the form of high quality prints. These prints will be included as part of our backer rewards and will eventually be for sale on our website. Check them out below! 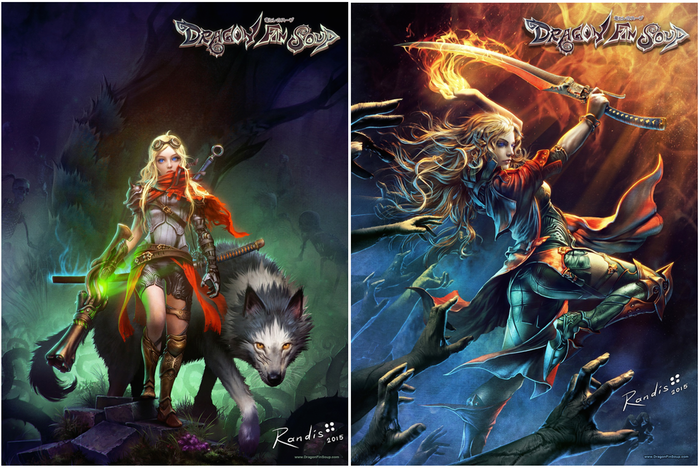 Once again, we couldn’t have done this without all of you! We really appreciate all your patience and understanding. I also apologize for the delayed update, it’s just five of us and things have been pretty crazy lately. Expect more positive and fun updates in the future.