Doosk is now including optional dusk monsters. You can choose to play the mod with either doom or dusk monsters. Monsters are also standalone, so you can play them with any mod's that are compatible with custom monsters.

Hi! It's been several months since last time i've posted an update...

Ok, so i've been working hard on the monsters update to make this upcoming patch worthy enough for you to give the mod another try =P
If you thought the mod was good before, then wait until you see the things i've done for this update.
And if you haven't played the mod yet, then what a perfect time to join the frenzy =P

So, what's new on this update?

* Over 25 monsters from Dusk were ripped to this mod, making the Dusk experience even more accurate.

Because weapons weren't enough =P
Choose between Doom and Dusk monsters directly through skill menu, so that way you don't have to quit the game to select a different monster set.

* Optional models (with additional help from JD-513): Sprites were ripped through keyposes, so synchronization between sprites and models were near perfect.
Sprites and model textures were pattetized at 8bpp, so that way filesize is vastly reduced.

* Optional standalone versions of the monsters: So they can be played outside of Doosk.
A separate download for those who wants to play with monsters, but not the original Doosk mod.
Load it with Titan, Q4 rip, or vanilla doom, if you want. Also compatible with Heretic.

Pressumed to work with other mod's too, as long as they don't collide with other monsters, scripts or user variables that monsters uses.

* Compatibility with heretic: Although this mod was designed with Doom on mind, later updates added Heretic support. Monsters also support Heretic and some of the monsters health pool were tweaked to match heretic better.
They can also drop items randomly, ala heretic to keep the ammo balance. 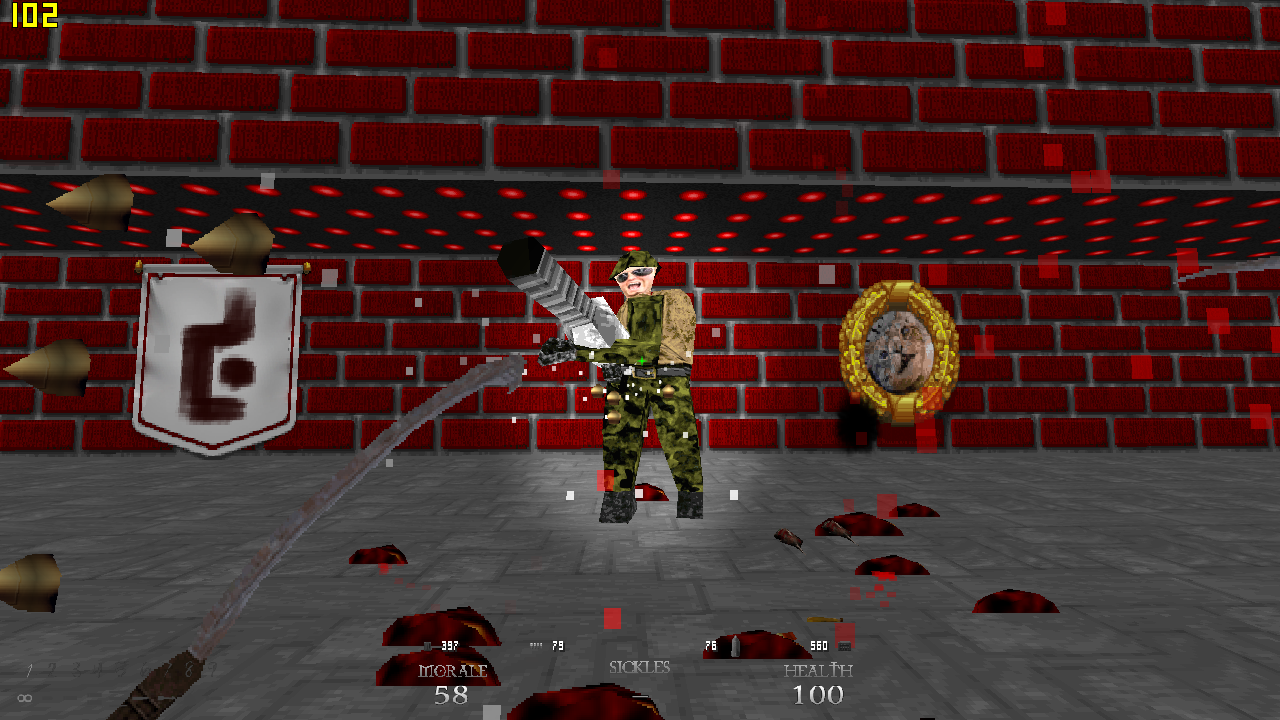 Then I hear you ask: you've done so much for this mod, no way you can do more stuff, right?

Well, there's one more thing planned for this mod in the future: custom maps!

Current plan is to make either a demo campaign with 8+1 maps or 3 episodes with 5+1 maps, while respecting the original themes dusk episodes had. Or something like that, idk yet.

Also, there will be several multiplayer maps, most likely aimed at deathmatches.

I haven't started making singleplayer maps yet, but i have currently done one multiplayer map for testing purpose, quite a fun experience so far.

There's not an estimated date for this mappack, as i haven't started yet and maps are quite a complex task to do, considering i'm not that skilled at mapmaking.

Unless anyone wants to help :P

The monsters update is coming on December 10th. Just in time for both Dusk and Doom anniversary.

I hope you have fun with upcoming update and don't forget to throw some feedback, so I can improve monsters bevaviour and fix stuff :P

I'd love to help on the singleplayer map pack. Even though I can't get the dusk .wads to load inside of Doom Builder.

Use Wally to extract the textures to disk, then import to your Doom wad. Different formats.

The mod was updated today with the doosk textures included.

25+ Dusk monsters ripped for the mod.
(Several modeldef coded by JD-513)
(Noesis suggestion and additional pickup models given by TheZombieKiller)
Added additional skill levels to play with Dusk monsters.
Added shotgun and assault rifle variants to soldier. They all fire projectiles though.
Added several audio cues to Big john's large attack state.
Added several voice cues to Mage/Soldiers.
Added random horizontal/vertical pitch to several Dusk monsters projectile.
Added some monster randomizers for certain monster types.
Made some monsters with high health pool more easily gibbeable.
Decreased stimpack value on dusk monsters mode from 10 to 7.
Decreased medikit value on dusk monsters mode from 25 to 15.
Now all dusk projectiles can be deflected (except cowgirl and bigjohn rocket projectiles)
Deleted frequent mutators options from skill menu, as dusk monsters were added and the space was needed for it.
Ripped rotating pickups for ammo, health, armor and powerups.
Added optional models to ammo and weapon pickups.
Added an accurate gore system, akin to dusk.
Supershotgun and Sniper rifle now can gib monsters.
Deflected projectiles now does 5x damage to monsters.
Added noblood flag to certain "sickle deflect monster" actors.
Projectiles no longer plays death sound when deflected by sickles.
Increased sickles blocker height and range.
Monsters corpses are now gibbeable (lzdoom/modern gzdoom only) Code taken from Q2TC demo.
Monster sprites were separated from base pk3. Monsters are now an optional addon, but they do require doosk to run properly.
Optional standalone versions of the monsters were made to be played without doosk. It requires a separate download.
Added dive, surface and puzzfail sounds to player.
Additional tweaks to some monsters, now some of them won't attack inmediately after entering see state.
Wendigo and dogbox now drops additional ammo, in compensation for the large health pool they have (3/4x more than the monsters they are replacing)
Added dusk monsters to heretic.
Added model definitions to heretic variations.
Added several multiplayer skins.
Added an option to delete single weapons upon picking up a duplicate weapon.
Tweaked health pool of "dusk heretic" monsters variants to fit the game better.
Dusk Monsters can now switch targets if they're attacked.
Added another hitsound option that changes based on which mode you're playing.
Improved mortar behaviour: Now grenade lives for full 6 seconds instead of exploding at random.
Mortar Projectile is less bouncier and it no longer spams the bounce sound if grenade is too attached to the floor.
Fastfire totem and soap no longer spawns on duels.
Mortar sprite replaced with actual mortar projectile.
Replaced some "vanilla replaced" sounds with custom ones.
Weapon pickup sprites converted into 8bpp.
Tweaked the options menu logo while on heretic mode.
Explosive/wood barrels replaced with actual dusk barrels.
Added radiation suit sprite/models replacements.
Tweaked the Assault rifle code while on fastfire mode.
Added different gore for scarecrow.
Reduced small chompers spit damage while on heretic mode.
Increased rat size.
Replaced several dialogues with language lumps.

(Michaelis) Players now shows the damage done to other players on dooskworld.
Addition to Crush states on all monsters.