Hi everyone! This is our 19th update on the development of Dogma: Eternal Night. Once again, we will tell you what we’ve been up to in the last month and some future ideas.

Hi everyone! This is our 19th update on the development of Dogma: Eternal Night. Once again, we will tell you what we’ve been up to in the last month and some future ideas.

So… every developer was in a situation where no matter how interesting and original the idea looked on paper, when realized, it was not at all what he wanted. This happened to us too – the dialogue mechanics with NPCs were not working the way we intended it to. As such, we decided to roll back this part of the game so that it can be worked on some more. In the span of a month, we tried a few alternatives and chose most fitting one.

The visual part was left practically unchanged: you still see a dialogue window, just like on previous screenshots. The idea is also the same: you can determine the character’s status via heart rate scale. Using it, you can find out how the character will react to your next remark. However, we removed the limitation of “steps” in the dialogues. Right now, the player can talk to NPCs for as long as he wants, until the character’s status reaches critical level and he refuses to continue the conversation.

Another novelty we added is the ability to pronounce phrases. We really want the text in dialogues to be pronounced by the characters as well as animate their gestures. It would be an impossible task for us to record each phrase and animation separately, so we used special algorithms that discern human speech via the sound track and then converts the data into facial movements. Now all that’s left to do is to correct some inaccuracies and add the necessary emotions, for which we use special charts.

We plan to further develop the dialogue system by making the NPCs smarter and more interesting. While in the early versions of the game conversations will be quite limited, we already have many new ideas on how to make them more varied. But for that we will need to do a lot of work and prepare a massive number of dialogues. 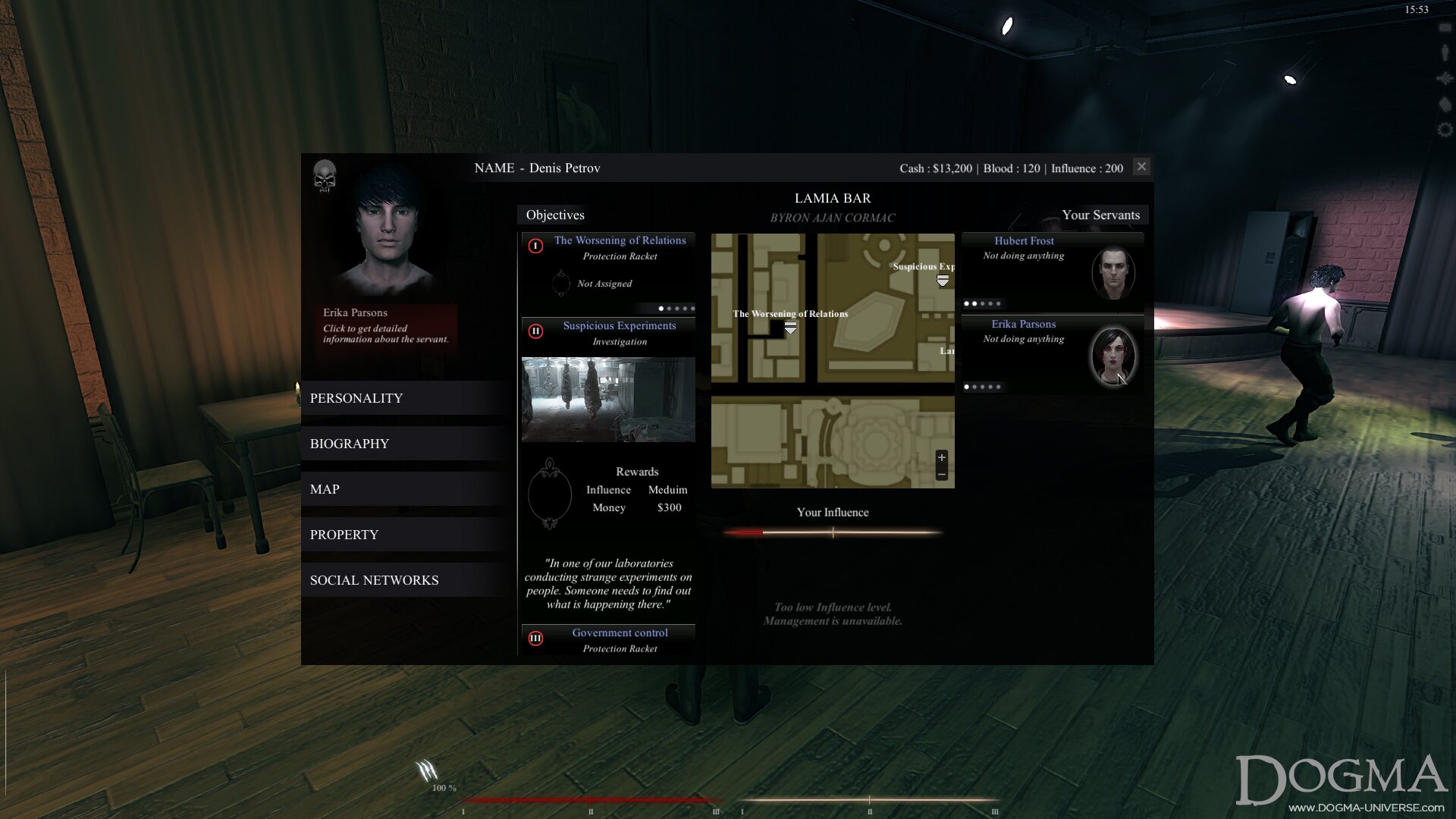 We understand that not all players can regularly be in the game, but would like to benefit even without access to the client. On the other hand, to give full freedom, we also do not wish, therefore, this part of the gameplay must not become primary.

From the very start of our project, we wanted to add “passive” gameplay, so that the player can assume the leading role but not directly participate. We understand that not all players can always be in the game, but would like to __ even without having access to the game client. On the other hand, we don’t want to give players absolute freedom in this regard, as the gameplay still needs to play the main role.

The most logical answer to this was to introduce mortal NPCs who can work for the player character. If the player has these mortal servants, he can send them to various city establishments to complete certain tasks. These tasks will not be related to the items the player characters receive, so the game can’t all be played in passive mode. However, by using this type of gameplay, the character can profit from it – make money, increase his Influence, get access to new business avenues or sabotage his “neighbors”.

We have yet to decide whether these NPC actions happen in real game time or will they all go “into the void” and return upon completion of their task. Their real emergence in the game world will create the perfect environment for griefers, who will make it impossible to complete these missions; it also makes no sense to just turn these NPCs into unkillable characters. In any way, this question is currently being reviewed and we have not yet come up with the decision.

We continue to collect funds for the project and slowly but surely, we are getting closer to the $15,000 stretch goal and maybe we’ll be able to reach it in the following month. This will ease the work for our programmers as we will be able to buy new software; while that sum is still not enough for full-scale work on the project, we will try to allocate these funds to the max.

Our next goal is to set up our first real game server. The equipment we have now doesn’t permit us to create a stable connection for all the users or support enough simultaneous connections. We now know what sort of equipment we will need and where we’d want to place it, so we’re looking for ways to achieve that.

We are also often asked about launching a Patreon campaign. For the longest time we shied away from doing that due to some organizational difficulties. However, now we can finally do it and we already created our own page where anyone can support our project.

Please bear in mind that instead of traditional crowdfunding platforms, Patreon sets up monthly donations from the supporters rather than a one-time payment.

That’s all for now, we’re off to prepare more new material for you guys.
See you later.