The latest version of Divide et Impera has been released on Mod DB. This award winning Rome 2 overhaul mod now has many new features and changes that make it the best version to date!

Population System
- The general ideas of the system can be found in that thread and at the PoR team's forums. All credit goes to their team for such a wonderful system. The basic concept is that population will be added to regions that will be used for recruitment. It is a bit more complicated than that, but you get the idea.
- This will be the last major system we add to DeI. We already have reforms, supply and other smaller systems. With the addition of the population system, we are reaching a point where I can say the campaign is finally a somewhat deep and complex experience. That is something I never thought we could say when Rome 2 was launched

New Grand Campaign Startpos and Start Date
- Thanks to our partnership with the Ancient Empires team, we have had access to their work using the Augustus campaign map for the grand campaign as a foundation to work from for DeI. Because of this, we are happy to announce we will have a completely revamped Grand Campaign for our players to experience.
- The campaign will begin in 278 BC rather than 272 BC. We have quite a few reasons for the move but, most importantly, we felt it would be something new for players who had been playing the previous grand campaign the past 3 years. The new start date allows us to incorporate the Pyrrhic Wars and creates a much more interesting starting situation in the central Mediterranean area.
- We will also have the wonderfully designed emergent factions from the AE team. These factions are completely new entities that can be awoken or rebel in every single region on the map. This makes for a much more dynamic campaign experience as you can create friendly liberated tribes and kingdoms.
- The Augustus map itself is an improvement as there are more regions, more factions and better designed provinces. Syracuse, Jerusalem and other cities are now walled capitals. There also seems to be better pathfinding on this map (like other scenario maps) compared to the original GC map.
- Along with the new map, I will have the Assembly kit files available so that anyone can take them and make their own startpos and/or scenario mods for DeI. 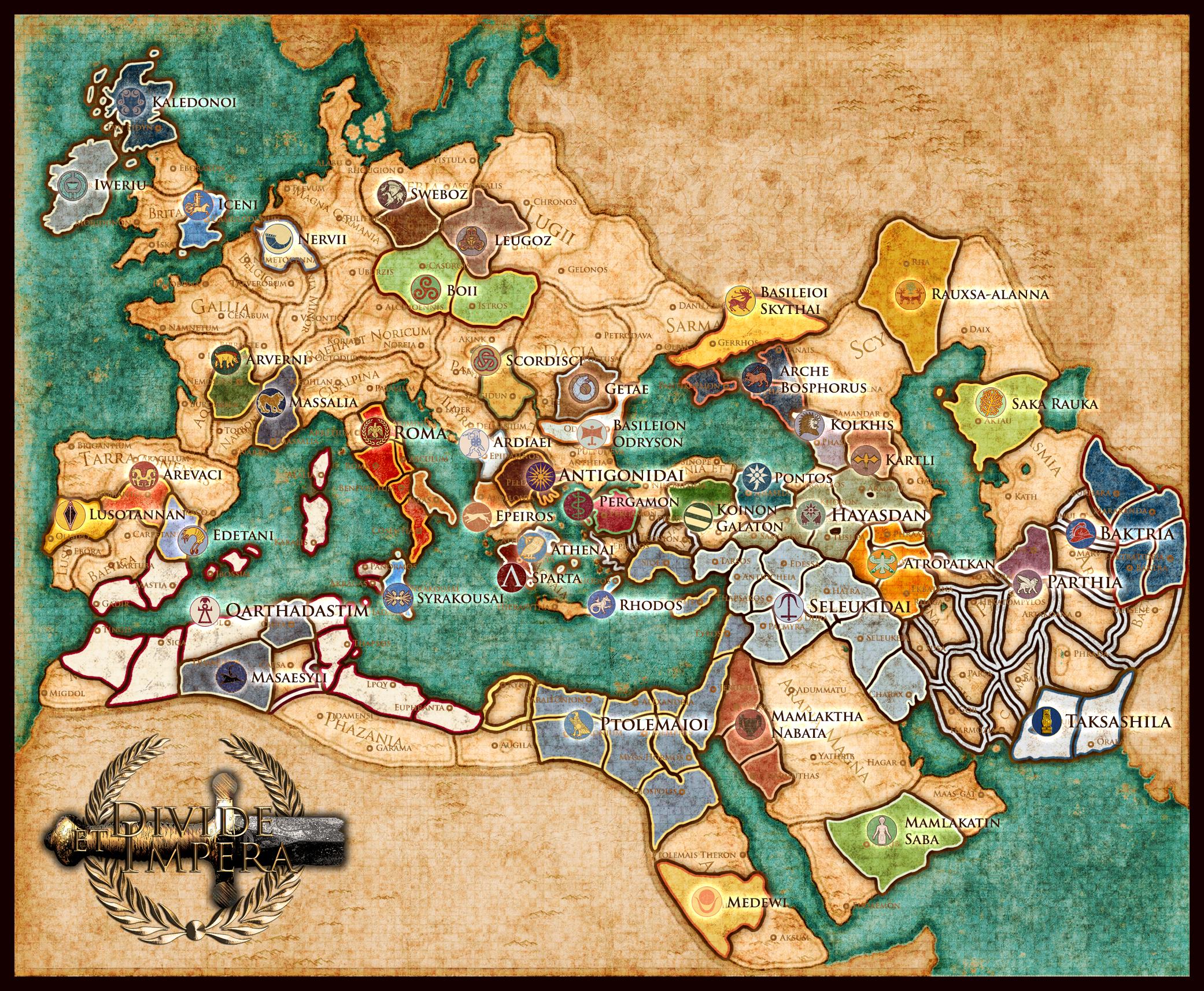 New Playable Factions, Unit Cards and Roster Overhauls
- New unit cards are being designed by Rusty for use in all rosters. They are amazing looking and you can already try some of them out in his submod thread!
- Medewi (Meroe), Atropatkan (Media Atropatene) and Rhodes will be new playable factions. These also have received roster overhauls, with Rhodes focusing on naval warfare.
- The Scordisci and Edetani will be playable and have received roster overhauls. These will replace Tylis and the Cantabri as playable factions, respectively.
- Other roster overhauls include the Lusitani and the Arevaci. In addition, some factions will be receiving new units to differentiate them from other factions. Some of these units may replace existing units.
- The Hellenic Overhaul is a massive endeavor that will redo many rosters including Sparta, Bactria, Athens, Pontus, Egypt, Epirus, Macedon and others.

Income, Building Effects and New Buildings
- The building effects in DeI have long been in need of some balance work. We have many vanilla buildings but, also, a large amount of our own custom ones that have been added over the years. Now that we have had some time, we hope to go through and balance some of the effects to improve unused buildings and shake things up in terms of region management.
- One major change will be the removal of a basic/hidden income bonus for all factions. This bonus exists in a large sum for every faction. Because of this, it is hard to truly impact income with in game actions. We will be moving most (if not all) of income to buildings. Now, raiding and sieging major economic centers will have a real impact on the enemy faction.
- New special capital and port buildings will be added for historically important cities and ports. These will allow these cities to have special effects, garrisons and recruitment.
- We are also working on a revamp of the building slot system so that we can have more freedom in the future to design region-specific and resource-specific buildings. Whether or not all of the new building ideas make it into 1.2 I am not sure. But, the idea will be that some resource regions will have special buildings. For example, a coin mint in a gold region or a timber camp in a timber region. Regional buildings will also allow us much more creative building chains in the future. Examples: 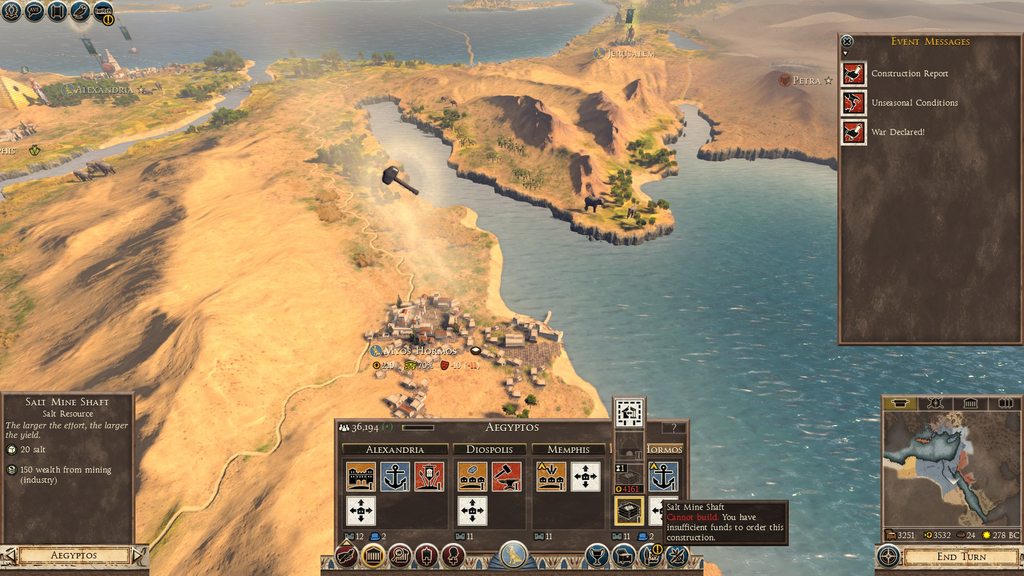 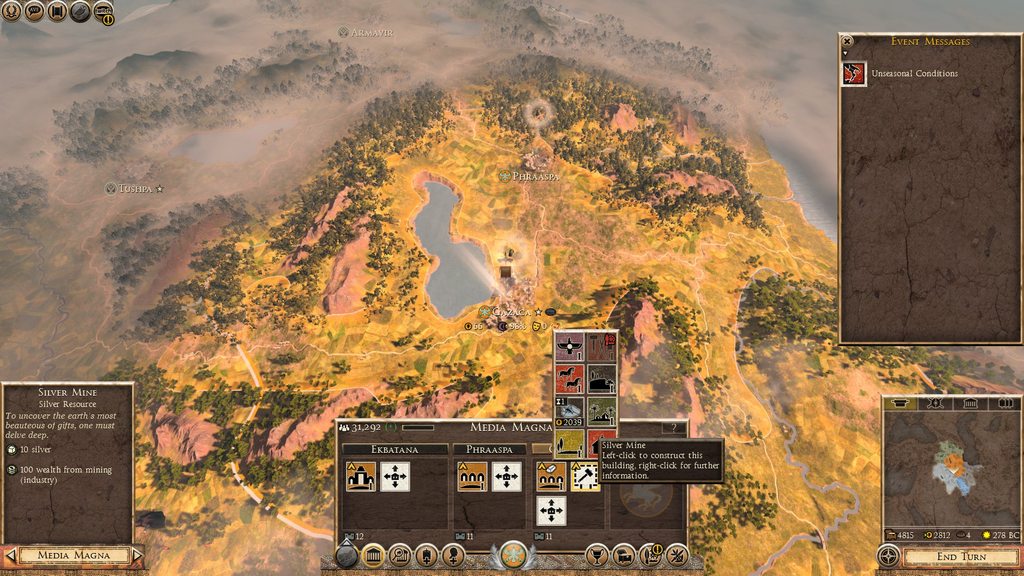 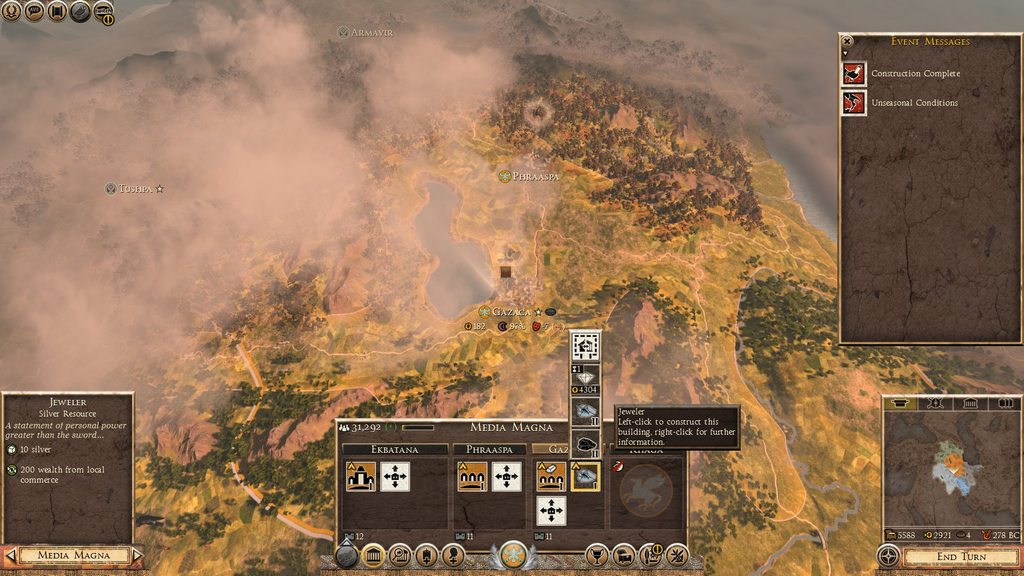 Political System
- We always wanted to make the political system a bit more interesting in Rome 2. Sadly, there seem to be some severe limitations in how much can be done here.
- In 1.2, we will have 4 political parties for every faction. Rome and Carthage will still retain their 3 playables while the other factions will only have 1. However, with multiple parties, balancing political influence becomes more important and dynamic.
- We hope to be able to mod and add to the existing dilemma and event system. Just how much can be done here is still a work in progress.
- Its possible we will also look into making civil wars a more viable mechanic that can happen if political influence is not properly maintained.

Historical This Year in History Messages
- Thanks to the use of the R2TR team's script, we will be having our own This Year in History messages. These have been researched and put together in order to add some flavor to the grand campaign as the turns go by.
- Various historical events will be listed at the start of each year to let the player know what was occurring historically at the time and, perhaps, be able to compare it to how his or her campaign played out in a similar or different fashion. 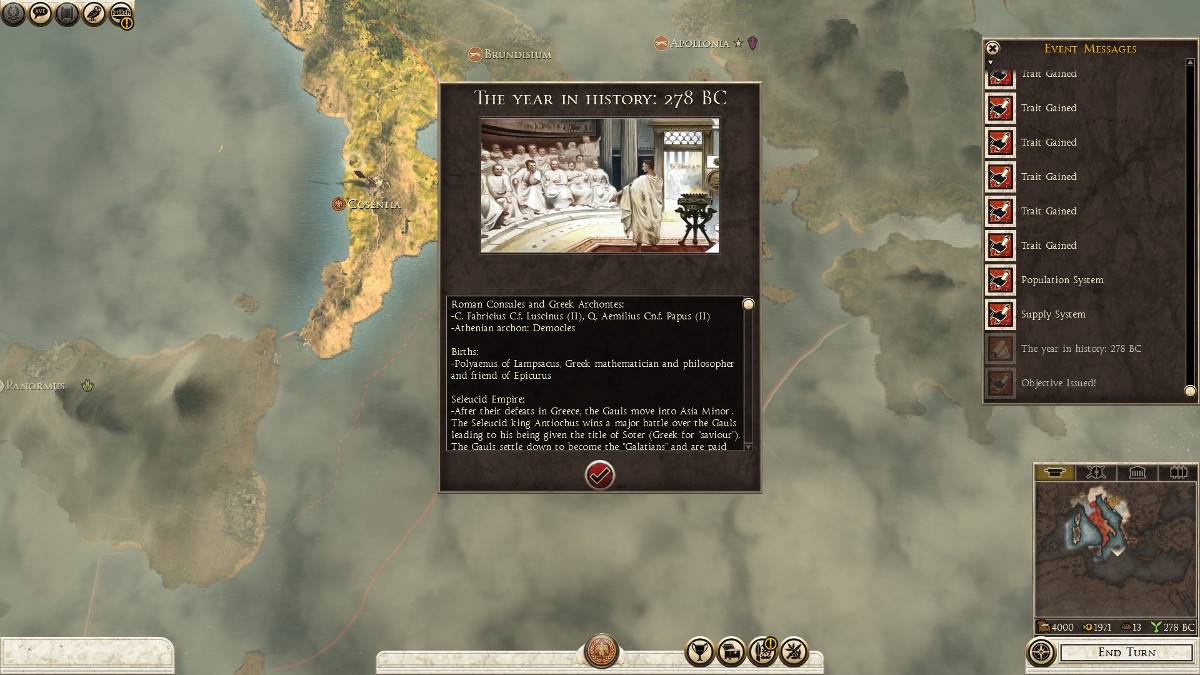 Trait System
- We want some more RPG aspects to the game so we are playing with this idea. Rather than having 3 slots that may get used as you play, including random weird traits that seem to pop up for no reason, we want the in game actions to be meaningful. However, we also want to continue using our archetype system from 1.1.
- The idea here would be to have 3 traits at character creation. One is the character's political rank (all characters would start at rank 1). This would also feed into our political overhaul as it would immediately make each character a viable part of the system. The second trait is an "upbringing" or "educational" trait that would be random. This would reflect how that character grew up and the influences of early life on that character. Finally, the third trait would be our current personality archetype.
- As the character makes certain in-game actions, that personality archetype could change based on those actions. So, eventually, a character who has a less-desirable archetype may become somewhat more virtuous through in-game actions. Perhaps, even, the reverse could happen as well.
- Political ranks will no longer be purchased. Instead, those ranks must be earned through actions in the game, mostly based on battles won and age. 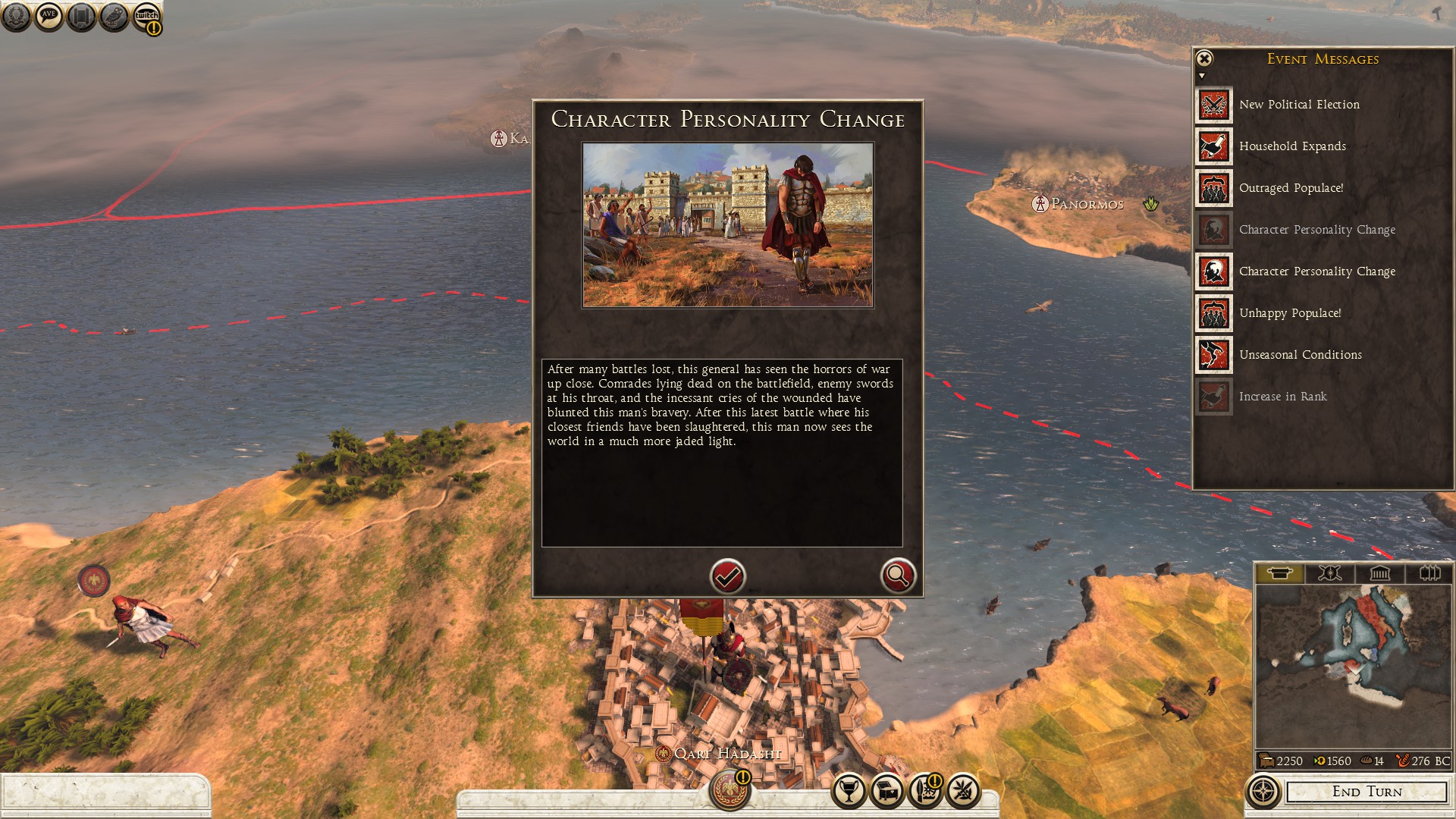 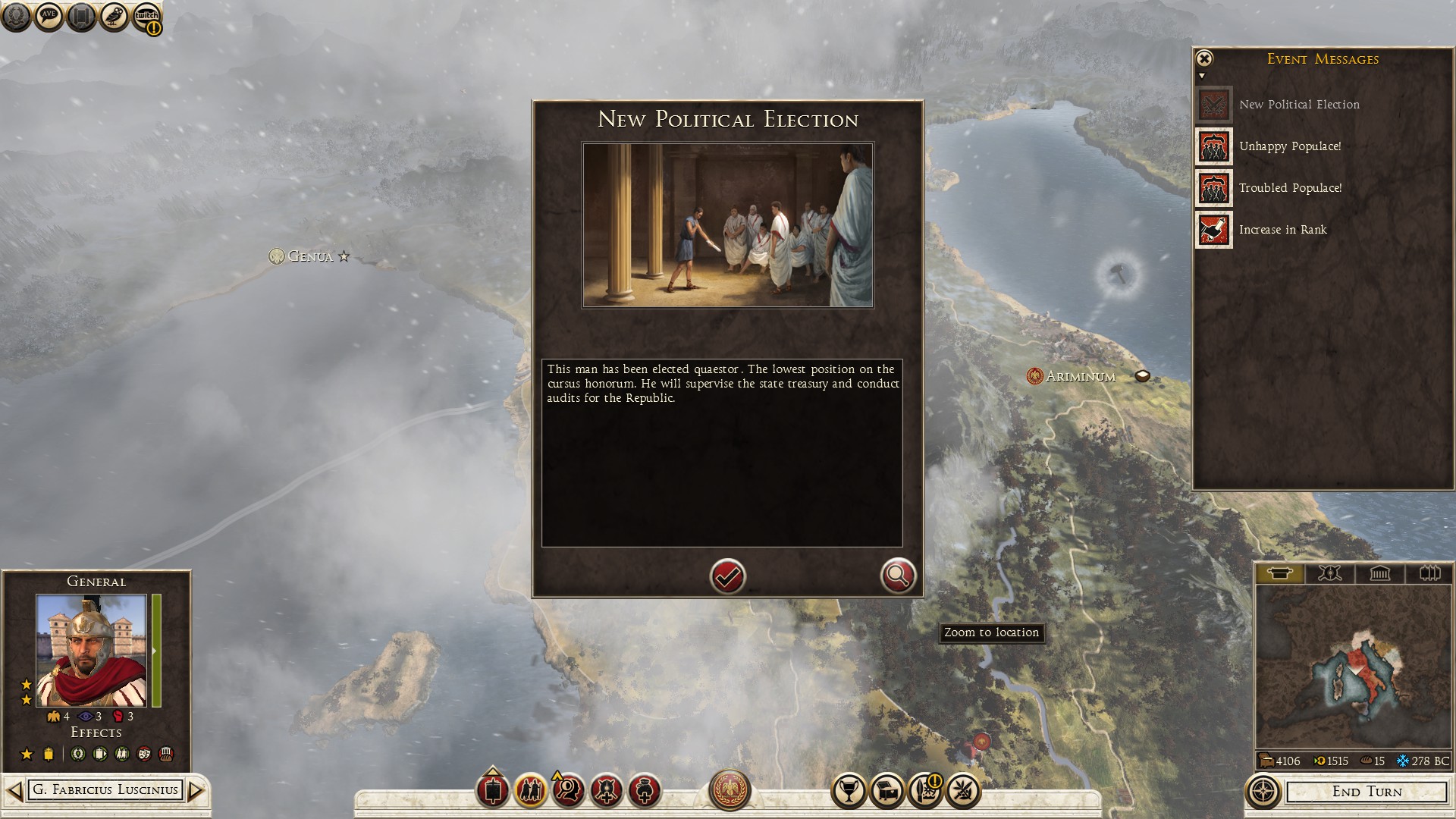 Smaller Additions/Fixes
- The CAI has been overhauled to make it much more aggressive and challenging.
- Many other smaller fixes and additions will be included. Some you can see that are submods already like Flashheart's submod compilation. For example, raiding will impact siege holdout in the region, money from diplomacy will be reduced, culture conversion will be slowed, building conversion will be slowed, etc. As always, we look at ways to make the campaign a bit more realistic and ...difficult

- Other small fixes that can already be found in the PoR submod to the supply system and other reported bugs.
- Reintroduction of client state levies for the player.
- The mod pack itself has been completely reorganized so that tables are easily identified. This doesn't matter for most players, but for those making submods or who like to mod DeI themselves it will be much easier.
- The reforms script has been redone so that loading games and going from battles to campaign is much faster.

Animations
- Another feature we are hard at work on is adding the ability of units to switch between the use of sword and spear in combat. This will especially be important for hoplites and other units of that type. Like some of the other features, this is still in testing and is very early in terms of mod inclusion.
- Units will have animated formations rather than forced formation attack. This allows us to not have to use the Rome 2 formation attack system. It also will mean that units will have a certain level of "push" in combat. Heavier and more elite units will be able to push back and through levy-type units.

Battles
- Hopefully, with the above animation changes, battles will become more realistic and (possibly) more toward the Rome 1 style.
- Pikes will work as we have hoped to have them work for a long time with these changes. They will have some barrier at first but will be able to get pushed into over time. Hoplites now have their phalanx back, also.
- The Battle AI has been drastically improved now that precursor fire has been removed. The AI uses skirmishing properly, reinforces and acts in a much more rational and challenging manner.
- Lots of other improvements overall to the battle system, almost impossible to describe unless played.


Credits
- The EB/EB2 teams for many concepts and text references along with general inspiration for our mod from the start.
- The AE team for our partnership that has benefited both mods and constant help and advice.
- The PoR team for their amazing work on the population system that is a game changer for Rome 2.
- The R2TR team for their history messages script.
- Total War Hellas for many great assets.
- Lots of other individuals who will be listed on the individual preview threads and the final release thread. Many people to thank so this is not a full credit list, I just wanted to make sure we acknowledged the teams who have been kind enough to share and help.

Great. But it work to slow for me. Any chance we get lite version of this mod for a low-rigs?

Stop being poor and upgrade your PC.

Great patch, I consider the mod to be extremely replayable and challenging.