An outline of the Palisade Line Rank 1 Defensive District, and the 'Border Patrol' ministry, as well as the 'Heyward' position for low-Ranking Defensive Lords, and the Palisade, Abatis, and Roadblock buildings.

The Palisade line is the first Defensive District in Brunelleschi, and provides some basic protection against the types of 'hit-and-run' raiding that are likely to occur in the early phases of the game. While the District itself is relatively inexpensive, the protections it provides against Cavalry units may be valuable enough to keep the District popular even for larger Settlements.

As soon as there's some kind of defensive structure, people will want to walk around it to make sure it's doing it's job. What's the point of building a big log wall if no one can see it keeping people out? All it takes to perform Basic Patrol is have a Palisade to patrol around and a mere 4 Action Points! 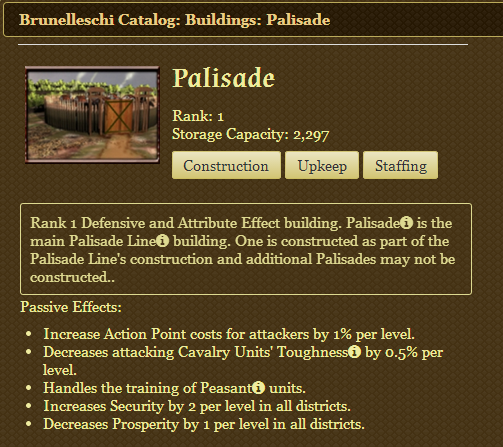 Quite clearly the main structure of the Palisade is the line of logs itself. This is a Defensive and Attribute Effect building. It makes attackers pay 1% more Action Points and decreases attacking Cavalry Unit' Toughness by 5% per level. It also raises Settlement wide Security by 2, but lowers Prosperity by 1 per level, which can be an impediment to Logistics and Construction. Governments should take care to only build the Defensive Infrastructure they need, lest the accidentally place unnecessary drag on the Economy. In essence, it slows brigands and enemy armies down and it gives you some peace of mind. 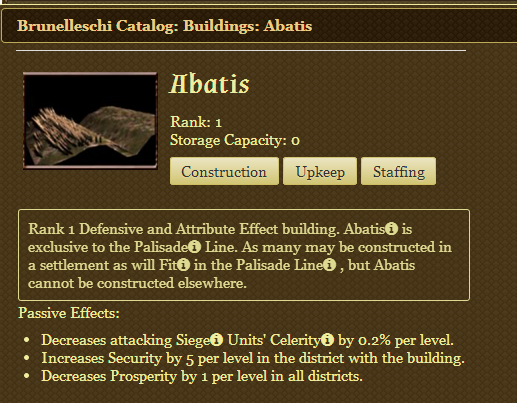 It is a very bad idea to run cavalry over an Abatis. It is essentially made of sharp pointy stakes sticking out of uneven land. Therefore understandably the Abatis decreases attacking Cavalry Might by 0.6% per level and slows attacking sieges down with a . 2% Siege Unity Celerity hit. Finally, much like the Palisade Line, it increases Security (+5 in the Palisade) while decreasing Prosperity (-1 for the whole Settlement) per level. 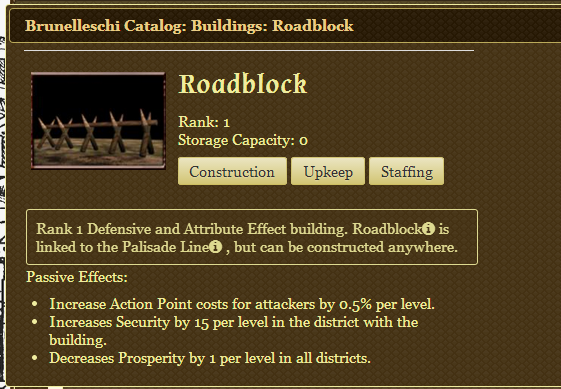 Don't let anybody in! Roads can be blocked in any district in your Settlement but Roadblocks are most effective at the Palisade line. So, for example, if you wanted to check every person in your settlement and make sure they hadn't snuck sweets in after bedtime, the Roadblock would be your new favorite Linked building. Every Roadblock increases Security for that district by 15 per level. Unfortunately, traders need roads, so every Roadblock also decreases Settlement Prosperity by 1 per level.

The Border Patrol Ministry belongs to the Defense Department and is usually among the least important defense ministries. However, careful attention to Immigration can be critical to the Security of a Settlement, so competent Governments will always choose a conscientious young Commander, Trader, or Noble Lord to administer this space (and watch the Citizenship rolls!)

The Heyward is the leader of the Border Patrol and has personal responsibility over all the building products the Border Patrol brings to them. Their attributes also contribute to the bonuses of the Palisade so Sovereigns may want to consider their entire Settlement's defense when selecting a new Heyward.

The Palisade is not only spread around the entire settlement, but as it's a Rank 1 District there simply aren't many lots for buildings. This may seem inconvenient at first until you consider that the Palisade is also the first target of attacking Sieges. Ultimately, a row of logs, however well constructed, won't be a match for Cannons or a heavy assault, so this District might wind up being replaced once the Outer Walls become available.

If any of this is of interest to you, please check out our work at BruneGame.com, or on IndieDB. We also have a Youtube Channel which is continually updated. Thank you very much for reading!