A brief description of a very useful Rank 1 District in Brunelleschi, the Forest Outpost, as well as its Main, Exclusive, and Linked Buildings and the Ministry that oversees it, the Chief Botanist.

There's simply no overstating the importance of Wooden Products to the Early Modern era in Europe. Woodworking is essential to the advancement of any civilization at this level of technology and the products of wild forests are still considered integral to daily life. In game terms, the Forest Outpost is one of the most potentially profitable of all Rank 1 Districts and can form the entire basis for a successful economy.

Sovereigns hoping to build self-sufficient Cities will have to include this district. The Lumber and Pulp materials produced by the Logging Camp are essential for Boards and Paper, which serve as the building materials and fuel for activities like Scholarship and Trading. Paper is ultimately needed to operate a Government so most Settlements will prefer to generate at least some internally. 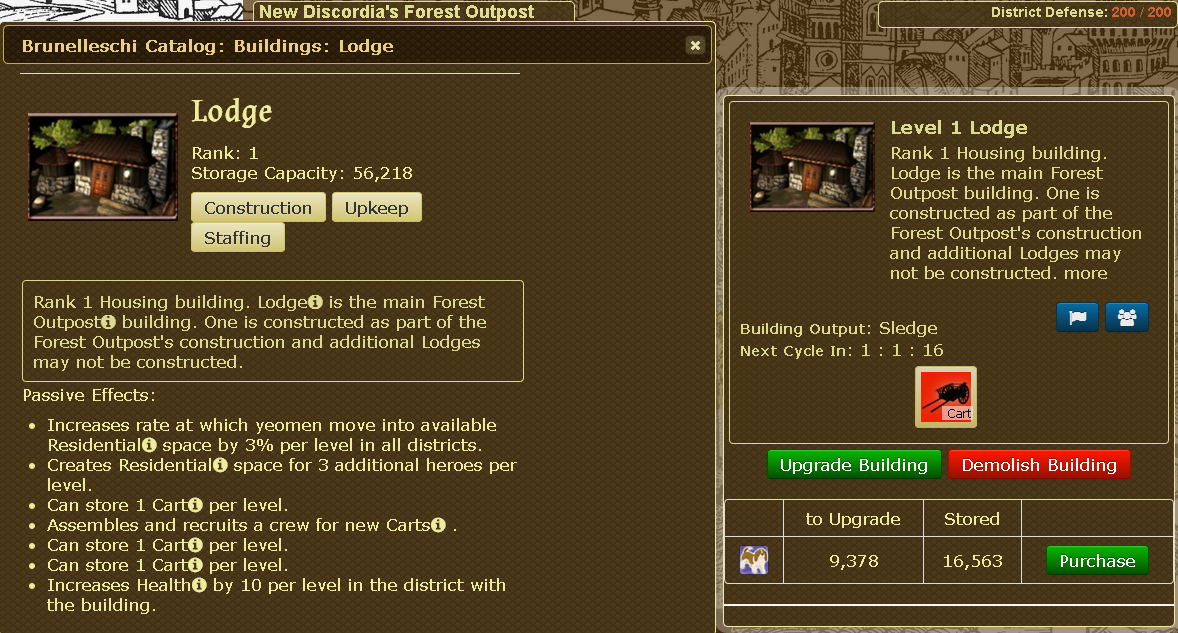 The Seat of the Chief Botanist, this cozy little building provides a host of useful benefits. It produces carts, adding to the overall economic efficiency of the Settlement. The health bonus creates some odd possibilities as well, as it could counterbalance Industry or Population located in the district. The employment opportunities and resources also increase the speed at which your settlement will gain Middle Class population. 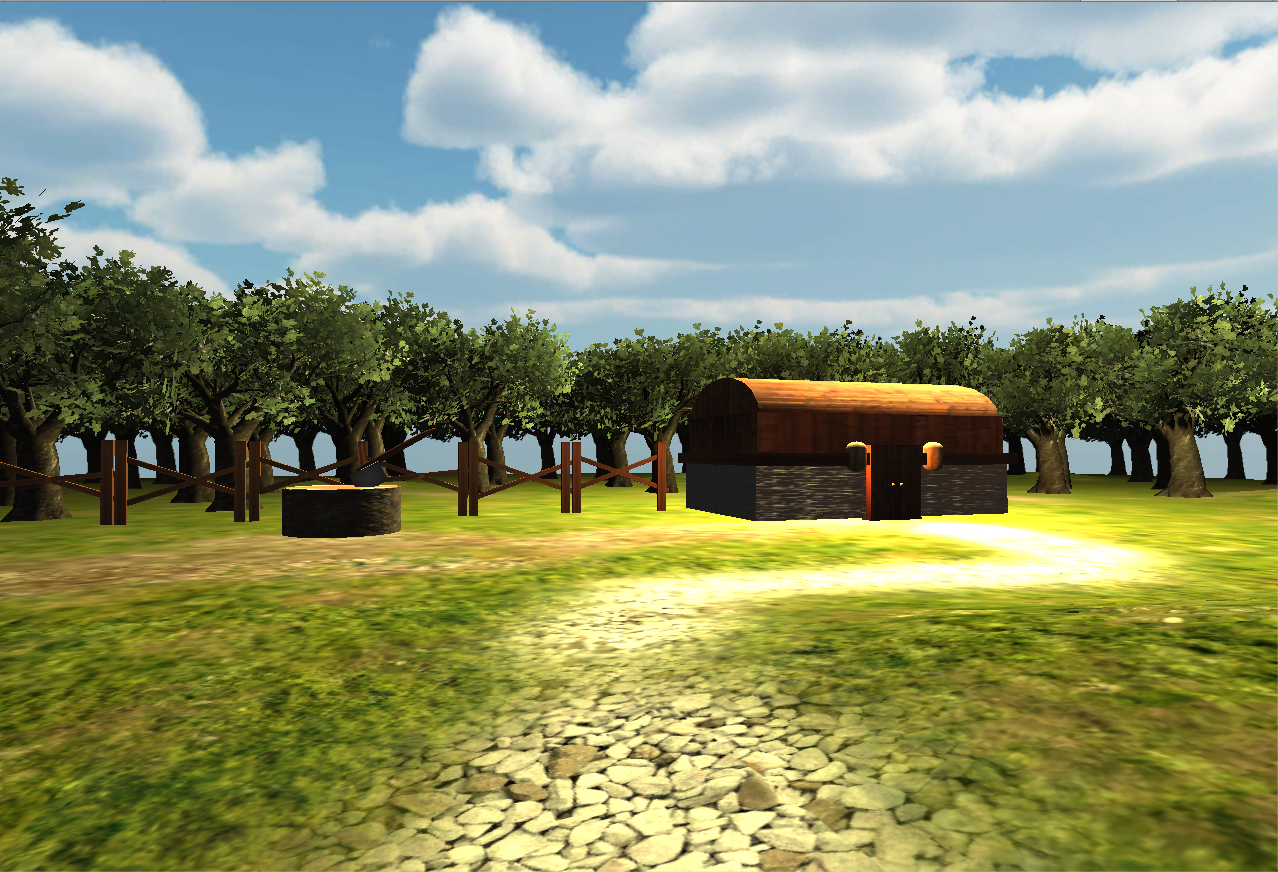 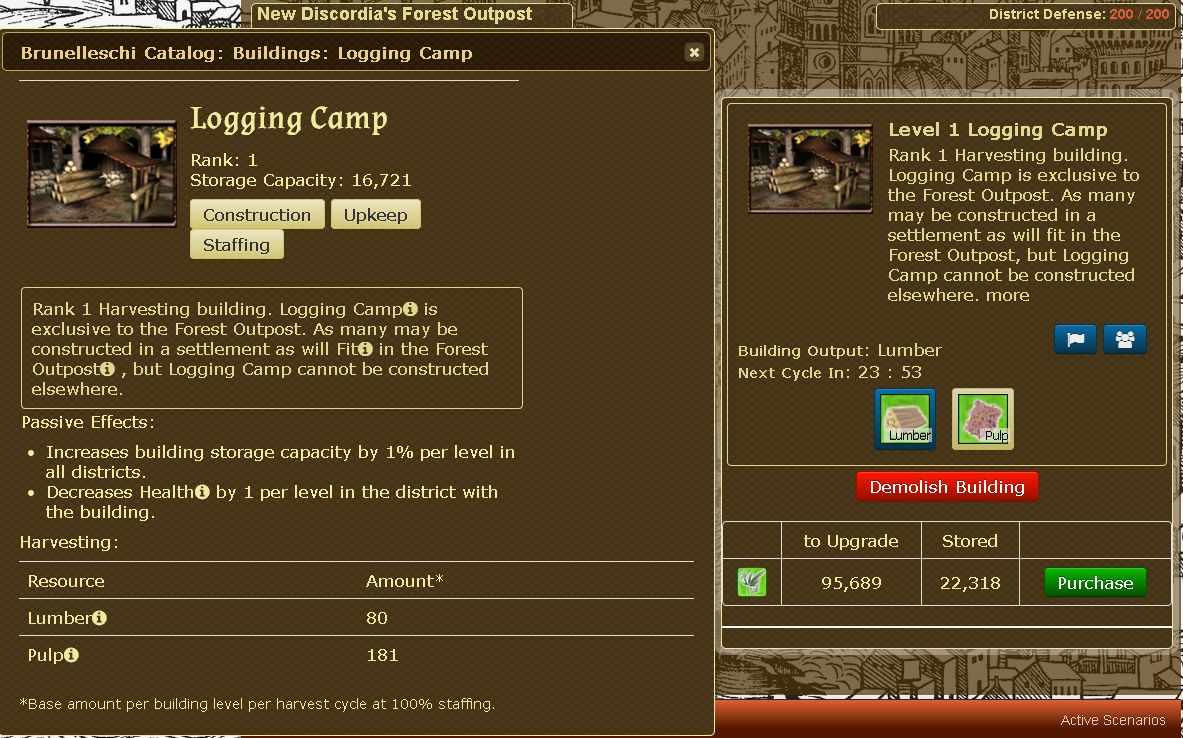 Most Sovereigns agree that the Logging camp is a necessary building for any Settlement. Aside from being the primary (and only reliable) source of Pulp and raw Lumber, the fine wood produced there improves the storage infrastructure of every other building in the Settlement!

The Hunting Camp can be built anywhere (even the Sewers, if you want that for some reason) but it's most efficient in the Forest District. The fine Pelts and quality wild Game produced there can be used and sold directly, or more profitably processed into Meat and Furs, which are a necessary Military Supply for 'Northern-Culture' units such as the Thegn or Fyrd. 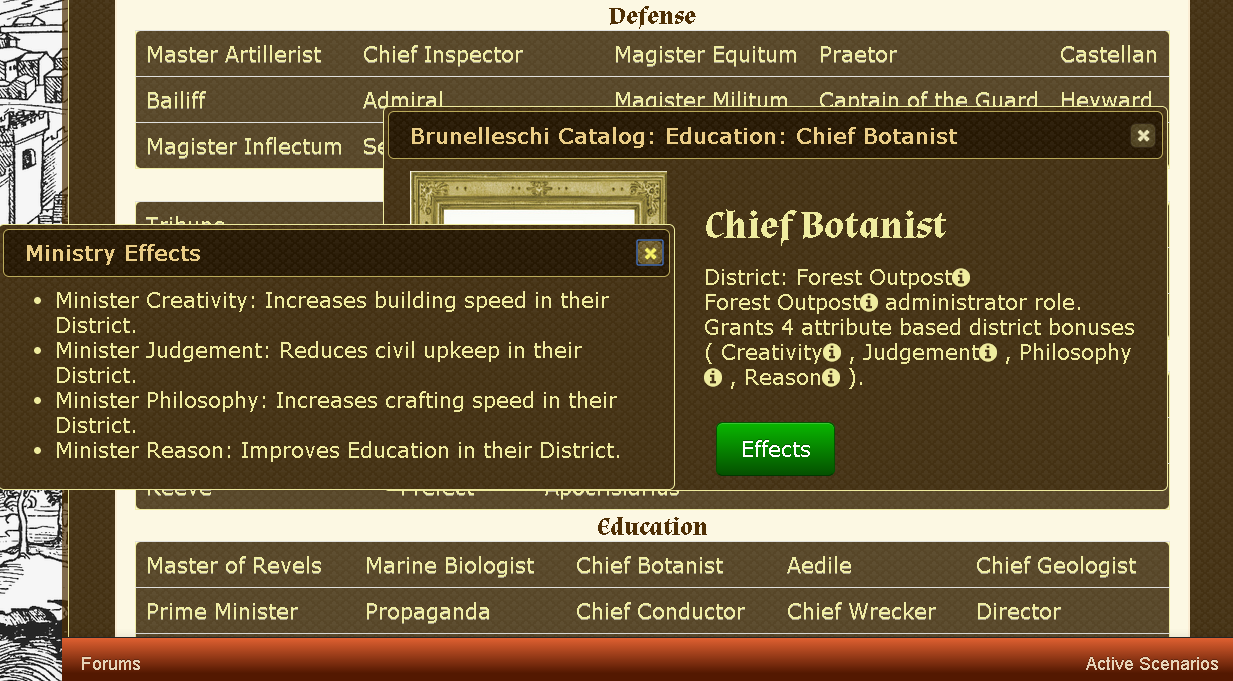 The chief Botanist is an Education Minister so they rely on Attributes that will be strongest in a Clergy or Caster lord. The position is unusually powerful for a Rank 1 minister due to the inclusion of the Building Speed and Upkeep Reduction bonuses. A Caster Lord in this position will significantly reduce the amount of expenditure and increase the start-up speed of a fully fledged Lumber and Fur economy. On the other hand a Clergy member would emphasize the more unusual options for the District, such as increasing the Education score of the district for Population or increasing the Crafting Speed in the case of a small, tightly integrated crafting structure for the District

This valuable district will always suffer from a severe lack of defensibly. For such an Economically important district, it's almost laughably attackable. Investing a lot into this district could create an overly appealing target for a Military Conquest. Other than that, it suffers only from the somewhat weak Ministry provided, but will likely be impossible to replace unless Lumber becomes very cheap on the Market.

Thanks very much for reading, if you'd like to try Brunelleschi it's always free to play at BruneGame.com , and if you're interested in our future plans and Crowdfunding efforts you can visit Aesopgames.com