Thanks everyone for participating in last weekends events. With your help, I've found a few more bugs, implemented your suggestions, made the game more efficient overall, and you've proved that players can play with anyone around the world. Dire Days version A1.3 is here and is already available on all the outlets. Some new media has been uploaded including some shots and a new walkthrough video for the changes and additions for version A1.3.

The Game Maker Community has been a tremendous help to make the game that players want. The default movement has been changed to traditional TDS movement and players can choose to keep it or switch to the FPS style movement. The invisible walls on the edges of the map now fade in when you get close to get rid of the clunky feel. A few modifications to the ping have been made and freed up a lot of unnecessary network traffic. 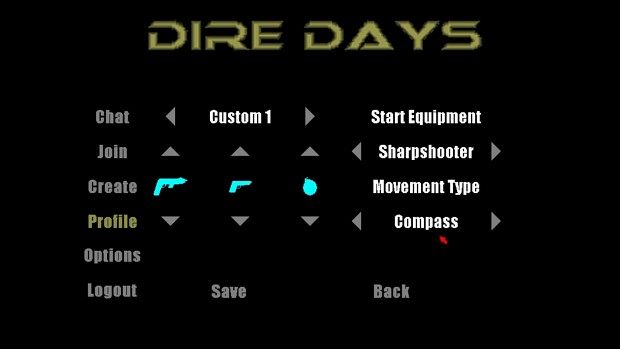 From the chat menu, players may now select other players in the list for a shortcut menu to whisper or join their game. The profile menu now has the option to select movement type. "Compass" for tradition TDS and "Toward Cursor" for FPS like movement. A new game mode has been added, "Capture the Bag".

This is a team game mode where each team has to steal the other teams bag and bring it back to their bag to score. Your team cannot score if your team's bag is stolen. When a player dies with a bag, the bag is dropped. You may get your bag secure by killing the opposing player that has your bag and picking up your bag. 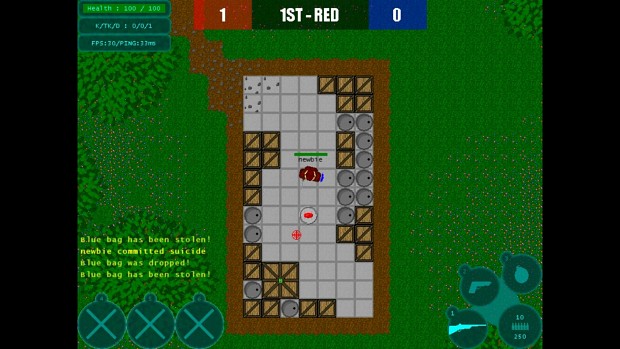 +Select player in lobby chat for shortcut menu to whisper or join game
+Error codes displayed for joining game, profile save, and option save
+Movement type select in profile menu
+Map boundires fade in as player gets close to them
+New game mode: Capture the Bag 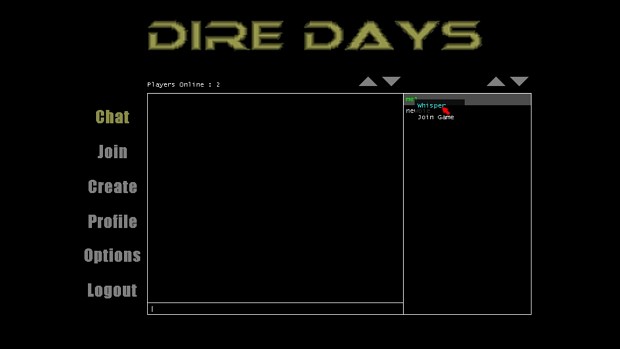 Dire Days will continually grow and get updates such as new maps, game modes, community features, user interfaces, weapons, and anything else I can think of. Future game modes I have in mind are Zone Control and Base Defense. I plan on expanding the profile and adding friends, and tags to put in front of your name to associate with a group or rank. The join game menu will be expanded and show more information about the game you have selected. All menus and game graphics will eventually get a make over to look more organized, and appeal to the eyes.

Join me online at the following times to play with others until a community is built.

This Thursday, May 28th 2015, The internet service will be upgraded to support more players. Expect the server to be down Thursday afternoon into Friday Morning; and a new client version will be uploaded to accommodate the new network settings.