We will be distributing Beta keys starting on March 1 in advance of our official Steam release on March 29. 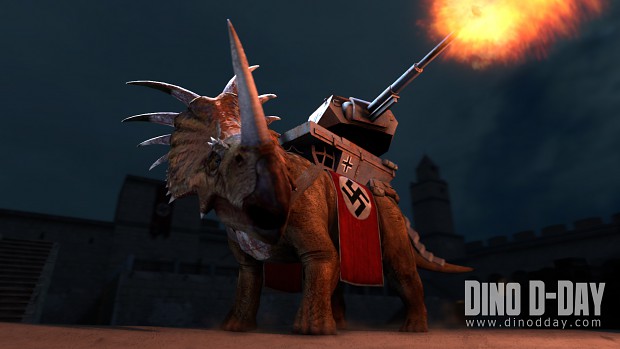 I am indeed interested and excited in taking part!

beta keys for a mod?

well i see the halflife 2 icon on this page

Its running on source engine...

I need to get my hands on a beta key, I want this game to be its best!

Oh I've forgot, it's multiplayer now. Are you releasing a singleplayer mode, too?

Is one freaking awesome dinosaur. Where do I get my own Tankosaur? :D

There we go another one going indie...

this was always indie
the mod was just a demo

I guess you intend to keep the swatiska symbols in there?
this can cause trouble with selling it in some european countries, especially germany
Might want to contact Valve about it

Germanys pathetic, they cant man up and face the ****** mistake they made.

We'll I wouldn't quite say that the people who're most likely going to be playing this game have partaken in WW2 in anyway.

Now, if they'd just start teaching english per standart in their schools they'd be good to go.

What does that have to do with anything?

you know, not all germans are that pathetic. Our government is.

By the way, all countries, also french, usa and england made historically big mistakes/bad thinks... But: Who cares bout a nuclear weapon in a civil city? who cares about surpressing india? It is not that I want to say "man forgive germany" (no, just forgive the current generation, because they have nothing to do with WWII), I just get started ****** about so many people out of GB, FR and USA being ignorant and always point with the finger at germany. Every country have blood at their hands, not just the "evil german's" :/
Imo that is the bad part, most countrys forget what they have done, but everything bad that humankind have done should be remembered so that we will not make the same mistakes later. So do not just remember "bad germany" remember what other countries have done, too.

THEY ARE ******* NAZIS USING THE DINOSUARS, THEIR SYMBOL IS A SWASTICA, SO YES THEY PLAN ON KEEPING THE SYMBOL, YOU POLITALICALLY CORRECT ***.

I want to take part in this

i am not very good in english so i did not understood: will there be a new version of the mod or a indie on march 29?

The full game will released on March 29th.

So it really did turn into a full game. Amazing. Looking forward to trying out the beta.

Of course we are interested in the Beta. I especially love finding map exploits.

Can't wait to see the final product. It looks well polished. The most important thing of all is balance. There should be no good corners or safe spots to camp. No weapon can be overpowered, etc. These guys should know what they're doing, though. They already know this. I can't wait to see the beta in action.

I will not refuse to take part!

I would love to try the beta! I really hope I can take part!

i want a beta key

is the beta free?

im interested to play i hope i take part in the beta!

this game is good should make a second i world war 3 :D