Today we are showing off a couple of the infantry engineering tools used by the French.

Today we are featuring two entrenching tools that will be equipping our French soldiers. While you won't be able to dig with them, I'm sure you'll be able to find something to hit with them. 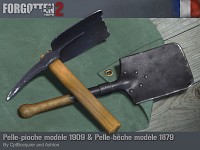 Originally invented in 1869 by the Danish officer Mads Linnemann, this small entrenching shovel would go on to see widespread use across Europe, being adopted in some form or other by the Danes, Austrians, Germans, Romanians as well as the two nations of interest to us: the French as the Pelle-bêche modèle 1879 and the Russians as the MPL-50. Ours was made by Ashton.

However, a small entrenching shovel struggles in harder ground and the French had taken note that the larger sapper tools did not always end up in the same place as infantry needing to dig in. The solution to this was to provide a mix of different small tools between various members of an infantry squad, and the Pelle-pioche Mle 1909 fulfilled this purpose. Ours was made by Cpt Bocquier.