Copper Dreams uses tag-based dialogue, which we talk about a little bit in the initial Kickstarter overview of the ruleset. In this update we just wanted to go over how that will influence gameplay and roleplaying, and our reasoning for why we decided to use it in our original design doc.

Our goal was to make dialogue another tool in the player’s belt. Dialogue doesn't take away player agency, and is instead something that's either strictly for the player to get information from NPCs or playful banter — usually somewhere in-between. For Copper Dreams we came up with a few guidelines for dialogue:

Tags were initially a difficult choice for us, as it’s very easy to fall into the trap of dragging the player by the ear to show or tell them something just the way you want to through some dialogue event. Any DM knows the experience of setting up a great event or character encounter for a story to have a player evade or change it through clever or unexpected means. That’s awesome though, allowing player agency for creative problem solving is the crux for most [good] tabletop roleplaying we know. If we’re under the assumption that games should be a challenge, which we are, selecting through a handful of dialogue options for choice/consequence isn’t a challenge, it’s just a storybook with a no-lose scenario.

After assessing what we then wanted, we couldn’t use the typical CYOA events usually done in roleplaying games. CYOA style text options in a gameplay focused RPG is the equivalent of quicktime events to an action game. There's often a contradiction in design for RPGs where they give players an immense amount of tools and ways of completing tasks, but then in a conversation or cinematic players are often shoehorned into a situation where they can only access a fraction of those tools in story contextual ways. No amount of choice and consequence can make up for the fact that the DM took away the rules and tools you were relying on up to that point to be cinematic or story heavy for their own agenda, taking away from your experience.

We had to think about how we use it and make it fun in actual p&p gaming. Rolling for risky (permanent) social disposition changes for NPCs is a big part of that, as well as the focus of using them as a tool for gameplay and not story-dumps. The conversation flow of an NPC saying something and the player asking about keyword highlights is a comfortable flow and encourages the idea that you’re purposefully asking these questions, that these NPCs are a tool at your disposal instead of there to tell you about your story.

Tags became an obvious starting point for what we wanted to do. It gives the player total agency and voice of their characters by not having the game authoring what they say and how they say it.

More importantly, this coincides with our other goal to not streamline gameplay through cutscenes or dialogue options, and instead rely on emergent gameplay. Systemic gameplay can sustain itself with no matter what is thrown at it, which was already the goal, but now is certainly an emphasis as we aren’t controlling the content through dialogue.

For instance we have a lot of focus on sneaking mechanics during gameplay to avoid setting off alarms or being seen (or getting un-seen). It would be pretty dodgy, as your DM, if we say or ask to roll during a cinematic or dialogue to avoid being caught or set off alarms after stealing something or killing a target behind enemy lines. When there are burglary, searching, or just gameplay for NPCs existing with some sort of AI, we can’t have these narrative take-overs for the sake of story navigation, that’s lazy. We want to let players roll for these actions anyway they can think of tactically with normal gameplay.

So that’s been a lot of extra work for us to create systems that can ultimately be abused by the player, as we definitely have events and interesting things happening in the city, but for the sake of roleplaying we’re left with allowing the player to disrupt and tackle these events anyway they want to. To that end there is choice and consequence made by the player, not the author.

When you start a dialogue, we show a Disposition score and who/what influences it:

NPCs react to you in 1 of 3 ways, or what we call Disposition levels (DL), ranging from giving you no tags to ask about (Closed), some (Wary), or all they have (Open). DL table is pretty simple:

Closed: no tags to ask about

Wary: a select amount of tags from their total

DL is a combination of NPC and PC personality modifiers, so both player characters and NPCs can dislike or like each other automatically. Which is to say if you make or find an unsavory character, they will be the ones lowering DL when talking to NPCs. Adversely if an NPC has poor social modifiers or background advantages/disadvantages they’ll be influencing the poor DL. So in this way the player is always trying to mitigate a low DL regardless of the one causing it, as they’re the ones trying to get information. 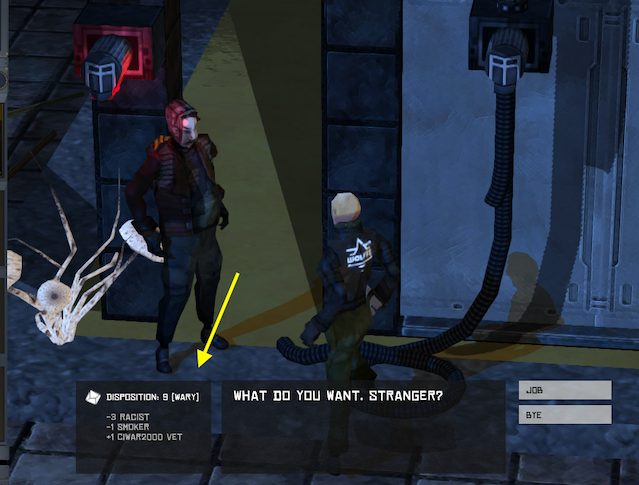 Creating the DL is sort of Superficial: the game! Importantly, it allows us to have pre set ‘randomized’ NPCs in the game that the player can always understand how to react to with the rules in place.

So for a simple conversation example the player tries talking to a non-hostile thug stationed near a dilapidated building.

A Closed DL would have the thug tell the player to shove off.

A Wary DL would present a piece of dialogue with limited tags, like [building] and [gang] to then be able to ask about.

An Open DL would give the player full access to the NPC tags, like [building], [gang], [trouble] and [missing], maybe allowing him to give the player warning that there is another gang nearby who is planning another raid on the area, and a few of the other guards went missing after patrolling through the building nearby. An easy cue for the player to venture into the dilapidated building with a little bit more caution.

In this situation, to give the player a voice, you could explore the building and head back to the thug, showing him a CiWar dog-tag of a gang member found in it to initiate the idea that you checked it out.

From outside combat you can use the same ‘SHOW’ action for an item to anyone to initiate dialogue about the item if they know anything about it or will react to it. For instance inconspicuously navigating a hostile base under cover and showing fake identification to every guard you see for good measure. You can also initiate a conversation with any of the other rolls we talk bout below, or new ones you can train for.

If the NPC will have too low of a DL and the player still wants more info, they have three proactive options besides looking visually more favorable or cybernetics. We have these Social rolls to accomodate this. What’s worth noting, as we briefly mentioned in the last update, the game saves everything, so your rolls and consequences for these are permanent.

If roll failure for Bribe/Persuade

If roll failure for Threaten

We'll have a small amount of potential NPCs for the section of the city you play in the alpha to see what you think, including merchants, civilians, and syndicate agents.

This was initially separated by character selection in one area and a static action-button field in another — this is what we had when we initially released the Kickstarter. From there it evolved as we iterated and adapted it to work well with movement mechanics, and now finally have what we’re putting in the alpha. It’s a lot more simple, by design of just showing you all 4 characters information and having everything at your disposal. Here's a picture of one character's data in the HUD (art in progress, textures needed and such): 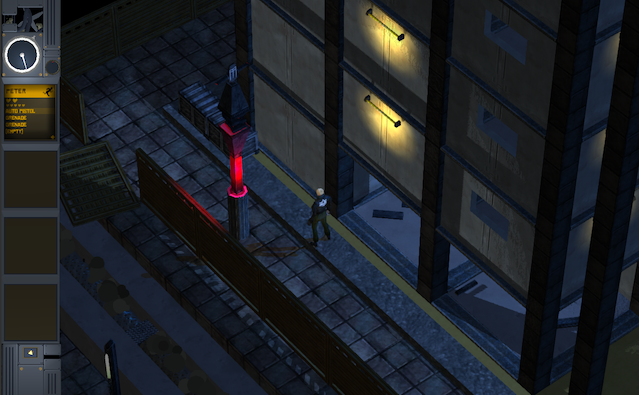 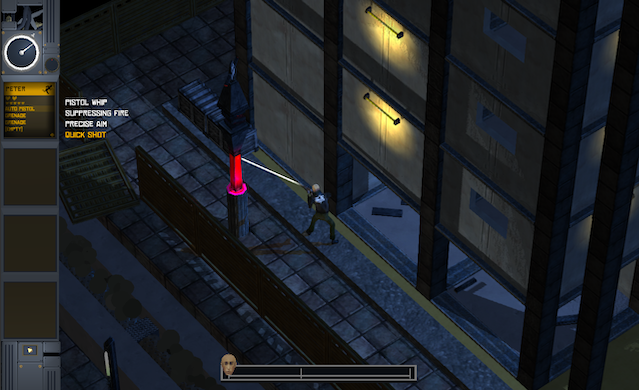 Instead of selecting a character to toggle another interface to show their actions, any character action list can be toggled from the HUD immediately by clicking one of their 3 quick items (4th being empty hands) or their characters skills, which includes anything from movement, those dialogue options, to cybernetics automatically being loaded in.

The selectable part of the character also has an icon displaying what action they are currently doing, which is handy in and out combat.

Bags are neat now too: