Today we talk about the changes we made to our dialogue system, one of the features of DiB that was very simple and straightforward, but also an important part of the gameplay. So we decided to make some cool enhancements to it.

(Everything you will see here is still early Work In Progress,
assume that many things will change until the release of the game)

First, we changed the way the portraits of our characters are shown during the dialogue. In DiB, the “speaker” was always the character on the left side of the screen, and the “listener” always on the right. It generated a lot of face swapping from left to right when the characters would exchange quick replies, it was not really pretty.

Now, we can label the character on the left or on the right as a “speaker”. When so, its portrait goes to the foreground, and the other one goes in the back, while being tinted black. We now have a better feeling of the character literally stepping forward to speak up. There are less “face swapping effects” too, as characters exchanging replies will stay in place and just come and go to the foreground, without exiting the screen.

We still have an animation for characters entering/exiting the conversation, like in DiB they animate from outside the screen into the scene, in a quick translation.

Concerning the characters portraits themselves, we decided on keeping a stylized art-style, but adding more details to the characters. We zoomed out a little, so now we can see a bit of their clothing and stance, not just their head. We also added variations on the way they look at the camera: some look directly to the person they are talking to, and some adopt a more evasive position… It all adds up to their personality and the emotions they can feel during particular dialogues.

Moreover, in DiB we had 5 facial expressions for each character: Happy, Sad, Surprised, Angry and Neutral.

We have expanded on the system, and now we can have special expressions for some characters, not just limited to the basic ones. We also added a Smile expression to all the characters, and a Wink expression for most of them. (We will expand on that list when the need arise) 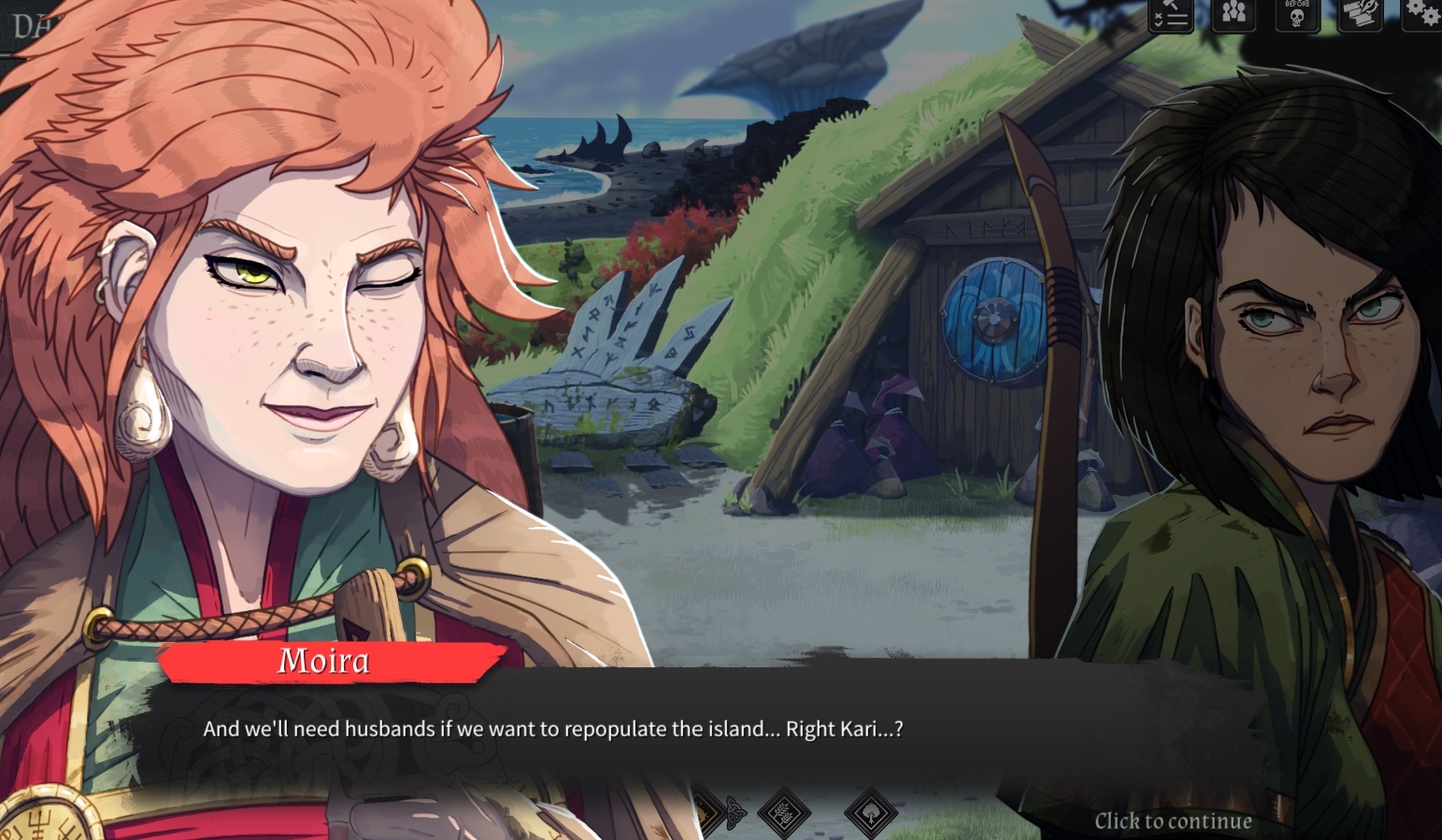 One of the big keyword when we thought about what we wanted to add in this sequel, was CHOICES. The dialogues in particular were an area where the player had no room to take tough, moral decisions, so that’s one of the first system we wanted to enhance for DiV. We want the player to feel invested in the fate of the group of people he/she is leading, and not just the day to day strategic decisions, but also in the little and big narrative moments between characters.

It made sense too as one of the big intentions of our games is to simulate evolving relationships inside a group of characters, so allowing the player to make choices that would drive these relationships in a way that he/she wanted was a mandatory improvement we had to do.

So now, the player will have the possibility to choose answers for his/her characters during dialogues! 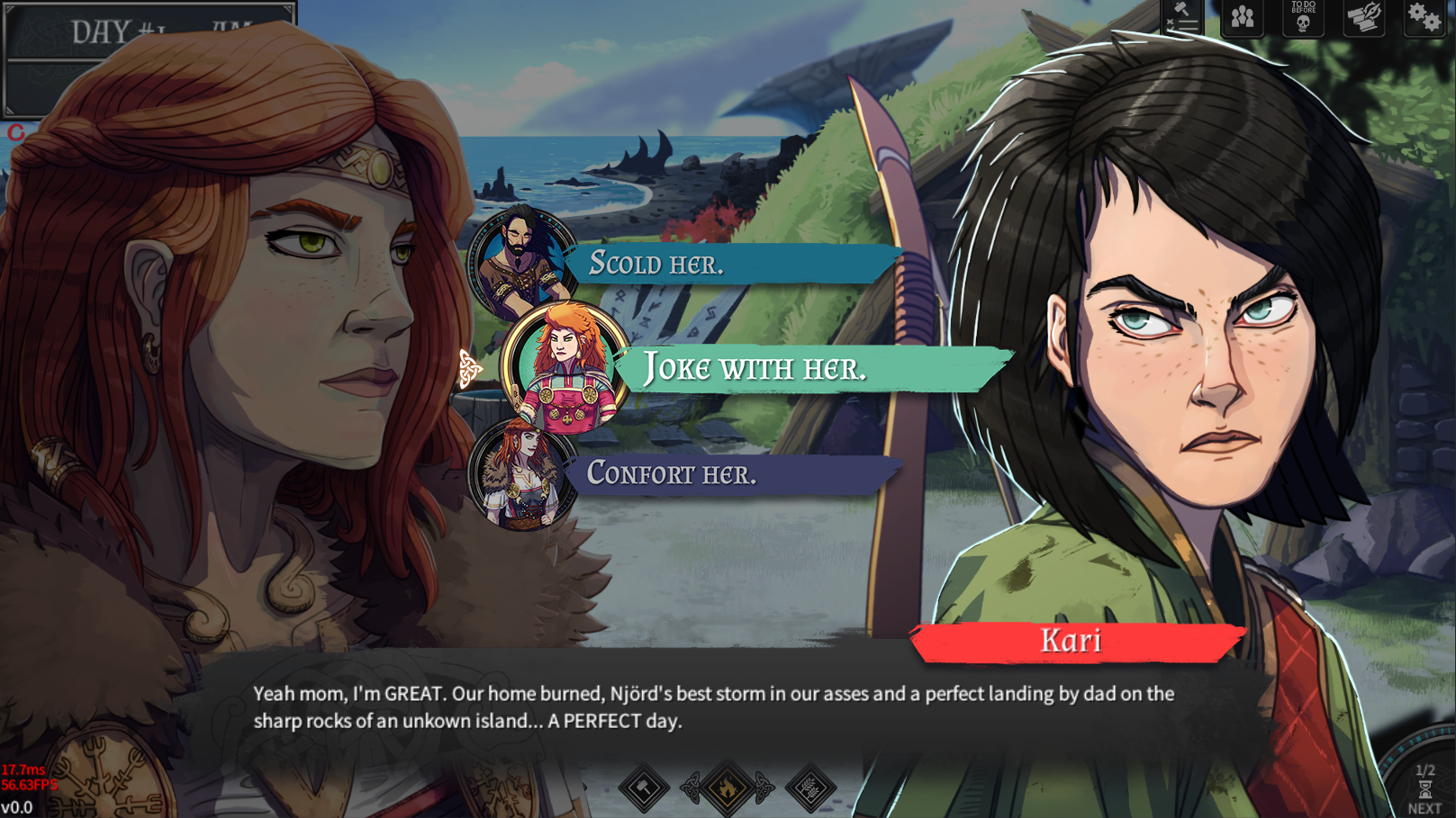 We would like to apologize for our little mistake (it's "comfort her", not "confort her")! Of course, it will be changed!

It’s may seem like a basic feature to have in any kind of RPG or Adventure game, but for us it raised many questions and design problems that we had to overcome. For example, in DiV you don’t play ONE character, but a group, with members of it that can die at any non-scripted moment… And probably inside a dialogue… So… We had to find rules and systems to make it work, and I think we have. In terms of narrative, it’s also a challenge because it’s not natural for a player to be confronted to choices for character A on character B, and then for character B on character A. It can be felt like cheating the narrative if done in the wrong way, so we must be careful with that too.

One last element that was to be taken into consideration too, and that you don’t particulary see as a player, is that the dialogues writing is SO much harder when you have choices, you can’t easily write a few sentences that go from point A to point B, but you must take into account branching ways in the dialogues. As a designer, you can fake it by giving “false” choices to the player that all end up on the same finishing branch, but we don’t want to overuse this kind of trick, if we want our choices to have impact, we must acknowledge as designers that some diverses choices will lead to more or less good, long and rewarding dialogues. It’s hard to accept, because as a designer you want that the player experience is always consistent and balanced. But we think that a little chaos in design can lead to interesting moments for the player, the pleasure of discovery, etc, etc…

Ah, and as a side note, it’s not only much harder to write, but also much, much longer! We now have to input all the branching options in a nice tool, and at least twice the amount of work in pure writing for each dialogue with branching options. (We use a heavily customized version of Dialogue System for Unity) 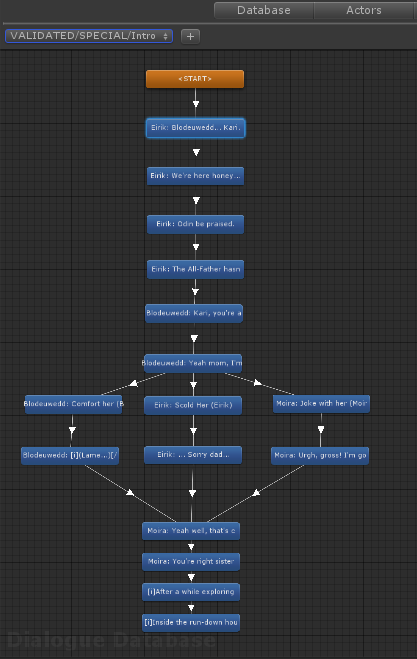 All in all, we are very happy with the first few tests we made with this new system, we think it will add a lot to the gameplay of DiV and will provide with a lot of “I don’t know what to choose!!!” moments. But we don’t want to sacrifice content quantity, so we’ll have to work extra hard to write two to three times more dialogue content than in DiB! (There were about 150 dialogues in DiB, we aim for 300 in DiV)